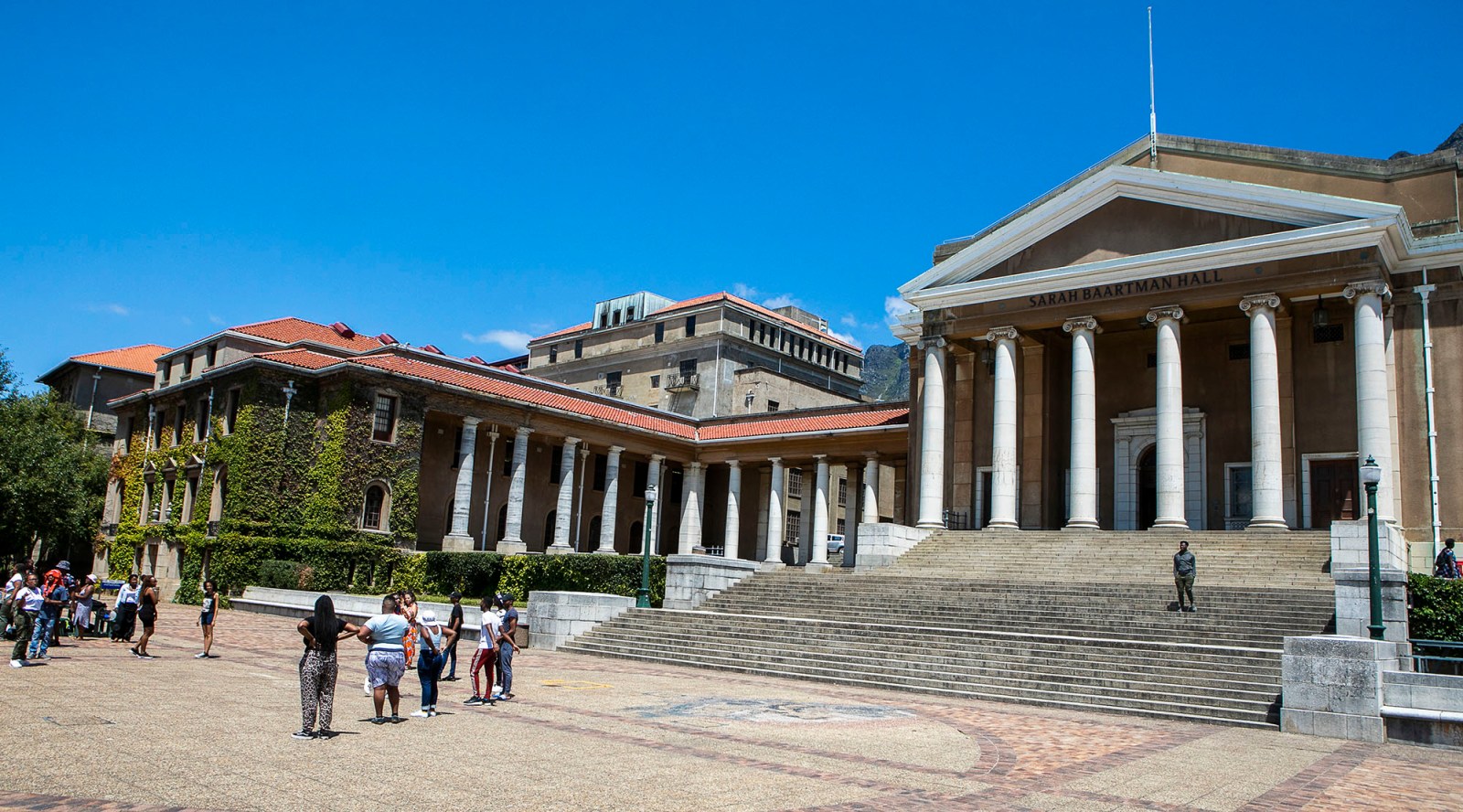 A grounded university curriculum that reflects the realities and is responsive to the needs of the poor, hungry and homeless of Africa is urgent and long overdue. This translates to a radical rethink of the purpose and mission of higher education. Taking billions away from higher education to bail out a historically mismanaged and looted state airline must surely reflect poorly on the agenda and prioritisation of governing elites. Part One of a two-part series.

Firoz Khan is Associate Professor in the School of Public Leadership at the University of Stellenbosch.

The poverty of theory

It was the occasion of Africa Day, 18 May 2018, at the University of the Western Cape — home of iconic liberation Struggle thinkers including Neville Alexander, Harold Wolpe and Jakes Gerwel. Students and faculty waited patiently in a large, packed lecture theatre for the keynote speaker, the “white African” intellectual, Ben Turok. The fierce and fearless champion of the poor entered the room to thunderous applause. He looked frail and weak. There was silence. He placed his notes on the table, he paused, he looked at us, and then the lion roared, students roaring louder.

The talk of the day was decolonisation — Reconsidering Decolonisation (2018) — and the late Turok seethed with anger, full of contempt for those who chose “mystifying” decolonisation as “some obscure psychological distortion”:

Another African intellectual giant, Thandika Mkandawire (2005), says arguments about “Africa’s recent past and current dependence” having “anything to do with the present conditions” is usually met with the “kind of eye-rolling impatience with which committed postmodernists treat people who still fail to understand that history has come to an end and so has struggle” against the unholy trinity of ignorance, poverty and disease.

Delivered to the continent courtesy of the “African diaspora and South African (mostly white) scholars” (Mkandawire 2005), the postmodern condition stands accused of having “both its feet firmly off the ground, aloof, cynical and patronising” (Mkandawire 2009). As Nigerian Denis Ekpo (2003) says:

“Little to nothing stops the African from viewing the celebrated postmodern condition… as nothing but the hypocritical self-flattering cry of overfed and spoilt children of hypercapitalism. So what has hungry Africa got to do with the post-material disgust… of the bored and the overfed?”

Or as Ato Quayson asks:

“What, for instance, is the use of discursive analysis of the language of the IMF’s economic recovery packages when this does not address the terrible economic and social disjunctures produced in [Africa] by the application of IMF policies and those of other international monetary agencies?… What… is the use of undermining discourses of power when we never encounter any specific scenario of injustice, domination or actual resistance from which we may gather intimations of the passage through the ‘postcolonial’ order? What, to put it bluntly, and even simplistically, do academic postcolonial studies contribute to the experience of post-colonialism in the world today?” (Quayson 2000, cited in Mkandawire 2005).

It may however be a tad unfair to expect and demand that postcolonial studies engage front centre with the inhumanity and misery of the dispossessed, displaced, and disenfranchised. It is simply not geared for this task, built as it is on disunity, ie postcolonial studies have neither an intelligible epistemic nor institutional framework. Rather, postcolonial studies resemble “trading zones”, a space of “provisional agreement” permitting exchange and discourse among scholars with diverse assumptions and epistemological positions (Watson 2013).

Sadly, even those scholars and researchers in Africa and the diaspora who do not “occlude” political economy (Mkandawire 2009) and realpolitik (Oloruntoba & Falola 2020) seem unable to address the “real challenges for sustainable development in Africa”, ie “economic and industrial development, the eradication of poverty, the resolution of conflicts, and the optimum use of natural resources” (Thabo Mbeki 2015 citing the Abuja Declaration 2009).

It is unsure as to whether those of and/or associated with the Pan-African condition — self-determination, self-reliance, pride, oneness of the human race — in particular, the Renaissance championed by Thabo Mbeki, will deliver Africa and its people to a prosperous, inclusive and sustainable future. With foreign direct investment and financial assistance from the West as the “only option available to Africa”, Mbeki’s Renaissance, “steeped in western dependency”, is slated as “a general reformulation of the World Bank’s strategy for Africa” (Beckles 2020). World Bank strategies have done considerable harm to African economies and societies including excessive downsizing of the state; institutional monocropping and monotasking (Mkandawire 2009); and neglect of infrastructure and tertiary education (Mkandawire 2014).

A grounded curriculum that reflects the realities and is responsive to the needs of the poor, hungry and homeless of Africa is urgent and long overdue. This translates to a radical rethink of the purpose and mission of higher education, particularly the place, status and priority accorded universities by the elite in the national, continental and Southern development agenda. Taking billions away from the national higher education budget to bail out a historically mismanaged and looted state airline must surely reflect poorly on the agenda and prioritisation of governing elites.

Africa is not alone

Regardless of complexion and condition, contemporary academics, researchers and scholars the world over continue churning out “increasingly precise answers to increasingly irrelevant questions” (Carnegie Reporter 2014). Unsurprisingly, these “answers” are of “declining practical relevance of academic research to policymakers, and more broadly, as part of the public discourse on global affairs” (ibid).

“Translating information into knowledge”, the Mexican novelist Carlos Fuentes alerts us, is “one of the greatest challenges facing modern civilisation”. Rest assured we could do without “armchair erudition, dead knowledge, and the peddling of petty antiquities” (Nietzsche 2000 in Reinert & Reinert 2006). “Science, and above all the social sciences”, said Nietzsche (2000), “should serve life” (ibid). How then to serve life in our troubled times when despair is “convincing” and hope in desperately short supply (apologies to Williams 1989 cited in Macduff 2017).

Serving life or choreographing a rhyme in tune with history confronts numerous obstacles.

First, politicians, officials, academics and researchers in Africa encounter texts and theories blind and deaf to “their own history, lived experiences — and their dreams” with “little exposure to their own continent and all its complexity” (Heleta 2016). When Africa appears in the curriculum, it is “little more than a version of the continent offered by apartheid’s Bantu education system — where students are taught a curriculum, which presumes that Africa begins at the Limpopo… and that this Africa has no intelligentsia worth reading” (Mamdani 1998).

Indeed, Africa is “probably the only part of the world about which it is still legitimate to publish without reference to local scholarship” (Mkandawire 2005).

From the classroom to the lecture hall to high office, Africans are lectured and taught what Chimamanda Adichie (2009) refers to as a “single story”, the “only story”:

“The single story… the only story… of Africa ultimately comes, I think, from Western literature. Now, here is a quote from the writing of a London merchant called John Locke, who sailed to west-Africa in 1561 and kept a fascinating account of his voyage. After referring to the black Africans as ‘beasts who have no houses’, he writes, ‘They are also people without heads, having their mouth and eyes in their breasts.’… And one must admire the imagination of John Locke. But what is important about his writing is that it represents the beginning of a tradition of telling African stories in the West: a tradition of sub-Saharan Africa as a place of negatives, of difference, of darkness, of people who, in the words of the wonderful poet Rudyard Kipling, are ‘half devil, half child’ [sic].”

With the canons of our disciplines inherited from the Enlightenment and Western modernity and their “plant[ing] in Africa with little consideration for nor understanding of local conditions on the continent”, African universities were born in chains (Mkandawire 2005). Sadly, Africans have come to accept our chains and jails with “little questioning, little debate, little assertion of what it is that [Africa] can contribute to global knowledge production”.

The late anthropologist, anarchist academic and “house theorist of Occupy Wall Street”, David Graeber (2007), reminds us that “the ultimate, hidden truth of the world is that it is something that we make, and can just as easily make differently”. Making differently — questioning, debating, asserting, contributing — is an arduous and dangerous undertaking comprising dislodging the single story, the only story of beasts with no heads and houses, and spores of the demon. Once again, I must return to the words of the Nigerian feminist novelist, Chimamanda Adichie (2009):