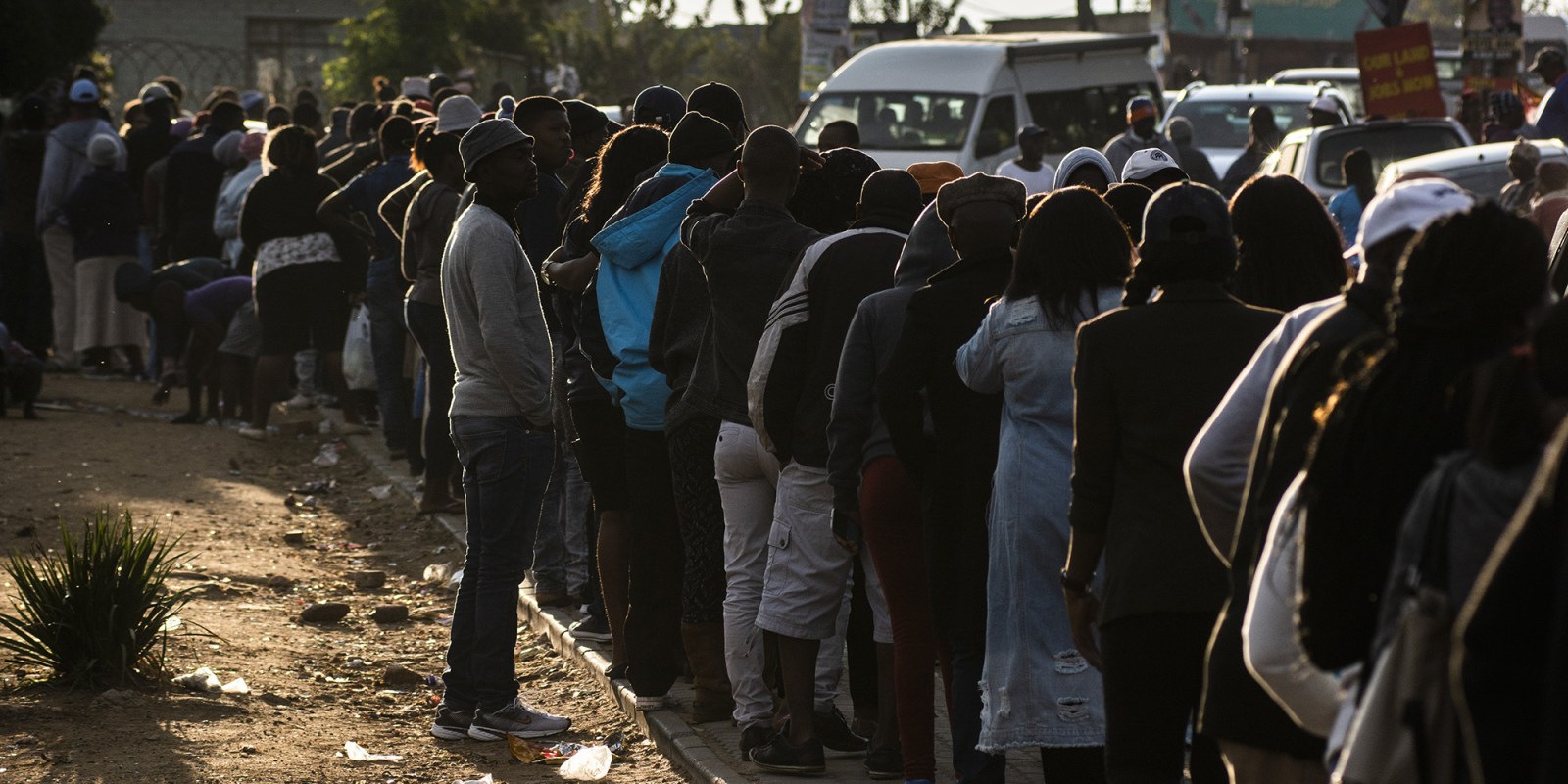 Voters stand in line to cast their ballots on Wednesday, 8 May 2019. (Photo: Waldo Swiegers / Bloomberg via Getty Images)

Over 145 candidates (including eight independent candidates) from 29 political parties are set to contest the by-elections in 40 wards in the country on Wednesday 19 May 2021. This article, on the City of Johannesburg and Ekurhuleni, is part of a series of preview articles.

There will be six by-elections in the City of Johannesburg and Ekurhuleni on Wednesday, 19 May. The Democratic Alliance will defend seats in all four of the Johannesburg wards while the African National Congress and DA defend one seat each in Ekurhuleni. The ANC and Gayton McKenzie’s Patriotic Alliance (PA) will aim to strike down a beleaguered DA in three wards in the south of Johannesburg. Both parties took wards off the DA in Johannesburg in November 2020.

The ANC would desperately want to have outright majorities in Johannesburg and Ekurhuleni after the 2021 Local Government Elections.

The party will want to build good momentum in these two metros on Wednesday as these are the last Gauteng by-elections before the local government elections. It will want to pick up Ward 7 in Johannesburg from the Democratic Alliance and have strong showings in both Ekurhuleni wards. It will also be interesting to see whether a small party like the Patriotic Alliance has the resources and personnel for three key by-elections in one day. The DA has struggled in Gauteng. It will be in desperate need of some morale-boosting wins.

Ennerdale and Finetown are in the deep south of the city, lying next to Grasmere. This by-election was called after ward councillor Danny Netnow defected from the DA to the PA. The DA beat the ANC by more than 1,500 votes in 2016. The DA ran up the numbers in the four Ennerdale voting districts while the ANC won the four Finetown voting districts at a canter. It was much closer on the provincial ballot in 2019 with the DA getting 60 more votes than the ANC as both parties received 42% of the vote.

The PA received only 12 votes in 2019 on the provincial ballot, well down from the 165 votes it received in 2016. There is a good chance that the PA eats into traditional DA support in Ennerdale. This will give the ANC a big advantage in this by-election as the PA is unlikely to drastically affect the ANC’s vote share in Finetown. The EFF doubled its vote share in the ward in 2019 by getting 10% of the vote. It will aim to eat into the ANC’s handsome majority in Finetown. While the former ward councillor Netnow defected to the PA, he will not be running for his old seat. The PA has chosen a different candidate for this by-election.

Brenda Johnson, an independent candidate, was at the forefront of community protests in 2018 to complain against the injustices experienced by coloured people in the province. She will hope that her name recognition in the community aids her in this crowded field. Al-Jamah and Congress of the People (Cope) are also on the ballot. The ANC will go into the by-election as favourites as it will face less competition in its Finetown stronghold.

Ward 17 includes a big chunk of Eldorado Park, Kliptown and a small bit of Pimville in the south of Johannesburg. Most of the voters are in the Eldorado Park section of the ward. In 2016 and in 2019 the DA beat the ANC by more than 1,000 votes in four of the five Eldorado Park voting districts. The ANC carries the two Kliptown voting districts and the small Pimville voting district. The by-election is taking place because DA ward councillor Peter Rafferty defected to the PA. He is the candidate for the PA and will aim to win back his ward. The PA got only 56 votes on the provincial ballot in 2019. It would be sensational if it picked up this ward less than 24 months later.

The DA and the PA will duel it out in Eldorado Park, with the victor likely to emerge as the winner of the ward. The ANC will hope that a split Eldorado Park vote and a higher turnout in Kliptown and Pimville will see the ANC sneak an unlikely victory. Other parties on the ballot are the EFF, Al-Jamah, COPE, the African Independent Congress (AIC), new party the Civic Movement of South Africa and the Shosholoza Progressive Party.

The DA won Eldorado Park by a landslide in 2016 and 2019. The party will now wonder how much ground it will lose to the PA in Ward 18 on Wednesday, 19 May and whether it could suffer the same shock as it did in Riverlea. The ANC and DA were accused of ignoring the interests and concerns of the coloured community, with matters reaching boiling point when a young boy with Down Syndrome, Nathaniel Julies, was gunned down in Eldorado Park in late August 2020. Gayton McKenzie seized on this anger when he spoke at Julies’ funeral. His speech re-energised the Patriotic Alliance with it, shocking the DA in Riverlea in a November by-election in 2020.

McKenzie will hope that his words still ring true for many of the Eldorado Park voters and that his party can also take this ward from the DA. This would be astonishing as the DA received 9,535 more votes than the PA in Ward 18 in 2016.

The DA comfortably won every single voting district in the ward in 2016 and 2019. The by-election is taking place because former DA ward councillor Fazel Jaffer defected to the PA. Jaffer is not standing as the PA candidate in the by-election.

The ANC, EFF and AIC are also on the ballot. Faradeba Evans, community activist and Greater Eldorado Park Community Council leader, is the candidate for the Civic Movement of South Africa.

Former DA ward councillor Sarah Wissler defected to Herman Mashaba’s ActionSA necessitating the need for voters in Ward 23 to choose a new councillor. Wissler and ActionSA have opted out of the by-election. The DA will not be losing sleep over this by-election and should hold it comfortably.

Ward 23 is south of the city centre including suburbs like Glenvista, Glenanda, Bassonia, Mayfield Park and the most competitive part of the ward Liefde en Vrede.

The ANC and EFF are on the ballot here.

This Boksburg ward has five distinct parts to it. The DA runs up the numbers in Sunward Park and Freeway Park. Dawn Park is the suburb where Chris Hani was assassinated. This is where the ANC gets the bulk of its votes in the ward. Klippoortjie is the least vote-rich part of the ward but it had a 92% turnout in 2019. It is an area where the ANC gets a lot of support. Windmill Park had the ANC and DA evenly matched in 2016, but the ANC carried both voting districts there in 2019.

The 2019 provincial results saw a much closer race with the DA getting 43% of the vote and the ANC finishing 10 percentage points behind on 33% as it received more than 1,400 more votes than the ANC. The EFF finished third on 14%, and the VF+ obtained 6%. The AIC was well off the pace here in 2019. There is a strong possibility that the AIC’s 5% in 2016 was an error in the counting of the votes in the ward. The AIC and VF are not on the ballot for this by-election, but Ashley Rutherford, a former DA councillor with links to the Independent Ratepayers Association of South Africa (IRASA) party is on the ballot as an independent candidate.

Ward 63 is in the southern part of the Metro near the Palm Ridge Magistrates’ Court and the Suikerbosrand Nature Reserve. The 2019 results in the ward were similar to the 2016 results with the ANC and the EFF having some gains and the DA and the chasing pack losing some ground.

The ANC and the EFF are the only parties on the ballot here and will want to make their mark on the Katlehong electorate before the 2021 Local Government Elections. DM