Better in the long run: How a migrant businessman found... 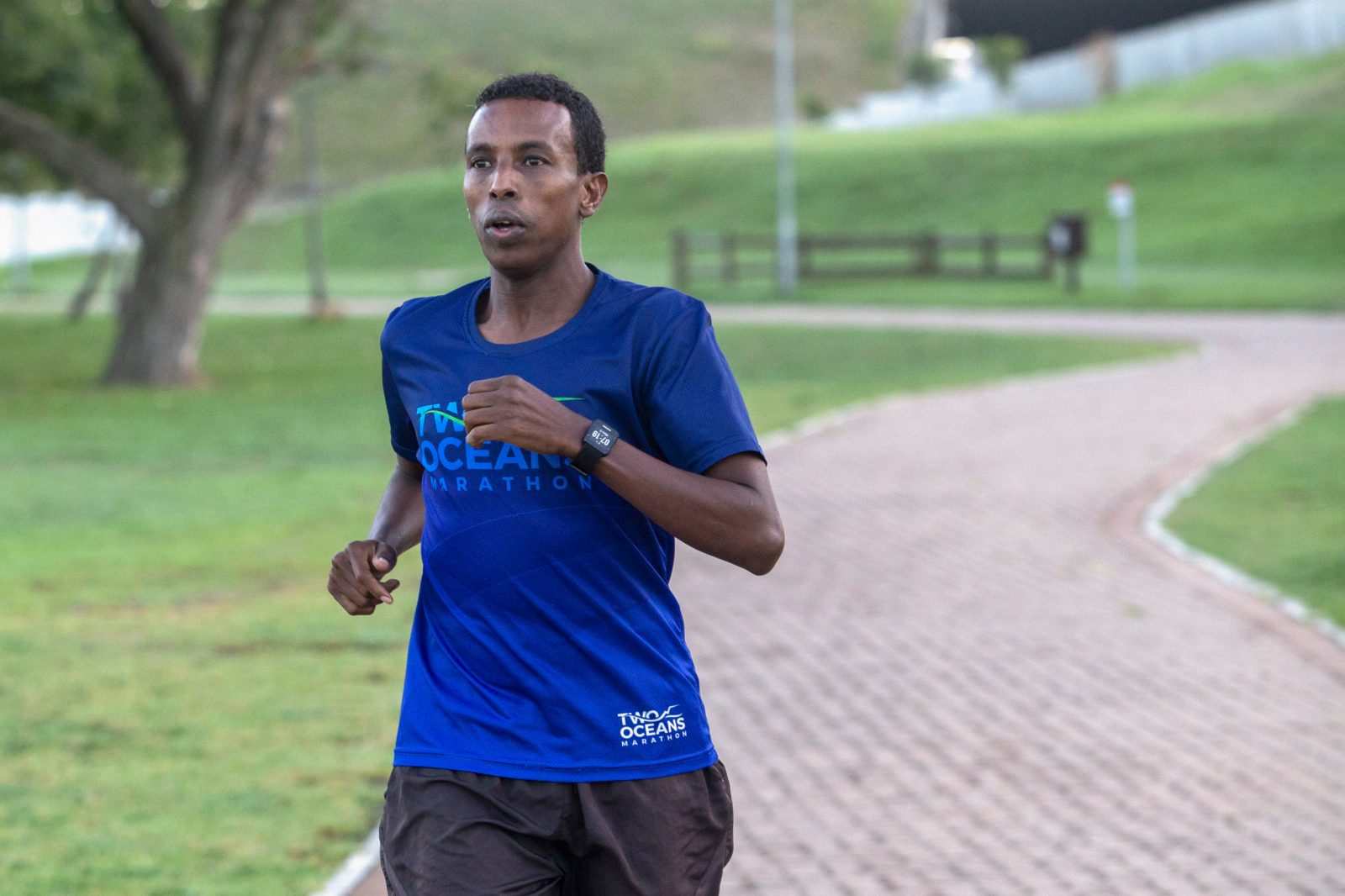 Abdullahi Ali Hassan enjoys running in public space. He was dismayed that during lockdown parks such as Jack Muller Park were closed, while golf courses stayed open to the public. (Photo: Ashraf Hendricks)

One of the best ways to explore a neighbourhood is on foot. That usually means walking when you’re on holiday. But what about running near your home? Local businessman Abdullahi Ali Hassan can vouch for this, too.

Abdullahi Ali Hassan is a well-known Bellville businessman and community leader. But, despite his intimate knowledge of the area, Ali says he learnt the most about his neighbourhood during hard lockdown when, throughout South Africa, people were only allowed to exercise within a 5km radius of their homes between 6am and 9am. “Through this experience I learnt every corner of my neighbourhood and gained great appreciation for it,” he explains.

Ali was born in Somalia and moved to South Africa in 2004. He says he woke up in Bellville on his first morning after moving to Cape Town and never looked back. He talks passionately about Bellville, its challenges and opportunities, and how they extend across the rest of Cape Town. He is acutely aware of the high levels of inequality as well as the positive role migrant entrepreneurs play in the country. He jokingly says to me, as a fellow migrant, that there is a stronger role for us to play.

But on the morning we visit him in the northern suburb, the conversation is not about politics. As the sun has just risen, we get a chance to glimpse Ali’s experience of public space since the pandemic started – in his daily routine as a long-distance runner.

Frans Conradie Street is his favourite training ground. He runs there almost every day. If injured, he walks. We go along to see what he means by the perfect training route: The mix of hills and flat land, the trees and, importantly, the eyes on the street for safety. “I know that when Capetonians think about Bellville, Voortrekker Road and Durban Road might come to mind first. But honestly, for a runner, Frans Conradie – with its wide pavements, relatively green surroundings and public park – are essentials of life.”

Frans Conradie connects to Jack Muller Park, one of Ali’s favourite public spaces in Bellville. He also takes us to the Tygerberg Nature Reserve and shows us a Bellville that is lush, green and full of life. Ali does not only run in Bellville; he enjoys running along many roads in Cape Town. Even though there are other runners around, he says not everyone finds this normal. He recalls running from Bellville to Cape Town one morning and a taxi driver who had seen him starting out and later saw him at the Salt River Circle shouted: “Are you mad?” She simply could not find an alternative explanation for such behaviour.

The way Ali describes running during lockdown resonates strongly with his philosophy of life. He says the trick is not to force things, but to run when and where you can. For instance, he doesn’t like to run with others, since this entails planning. He prefers running when work allows and when his body wants him to. He follows no particular training programme, but rather runs as fast or as slow as his body allows and also in the place where he feels most comfortable.

While he chooses to run on the open road, he says his neighbour and good friend prefers running through the residential streets of Bishops Lavis towards the airport. He says they each have their own reasons for picking those routes and it is great that they can connect with the environments they enjoy.

Ali’s experience of being “forced” to explore his neighbourhood is relevant not only in South Africa but around the world. He reflects on the advantages of what it means for people who are unable to move freely because they don’t have a car or rely on public transport that is not always reliable – or who simply have lost the means to pay for transport.

At the same time, he acknowledges that our realities are vastly different depending on where we live in Cape Town. During lockdown, Ali reflected on various contradictions visible in public space. He points to the fact that places like Jack Muller Park were shut but others like the Bellville Golf Club park remained open. In his view, such decisions seem to have had less to do with Covid safety and more with the social issues in Cape Town. “Can it be related to the power dynamics of the city and how resources are often distributed? Can this indicate how the restrictions and regulations and their implementations of Covid-19 have more major implications for the poor and ordinary citizens than the connected elites?”

When asked how he thinks public space could be improved in Cape Town more broadly, Ali says Bellville is relatively privileged compared with other places. “My suggestion is to prioritise places that have no access to green open spaces, and then come back here and improve what we have.” DM/MC