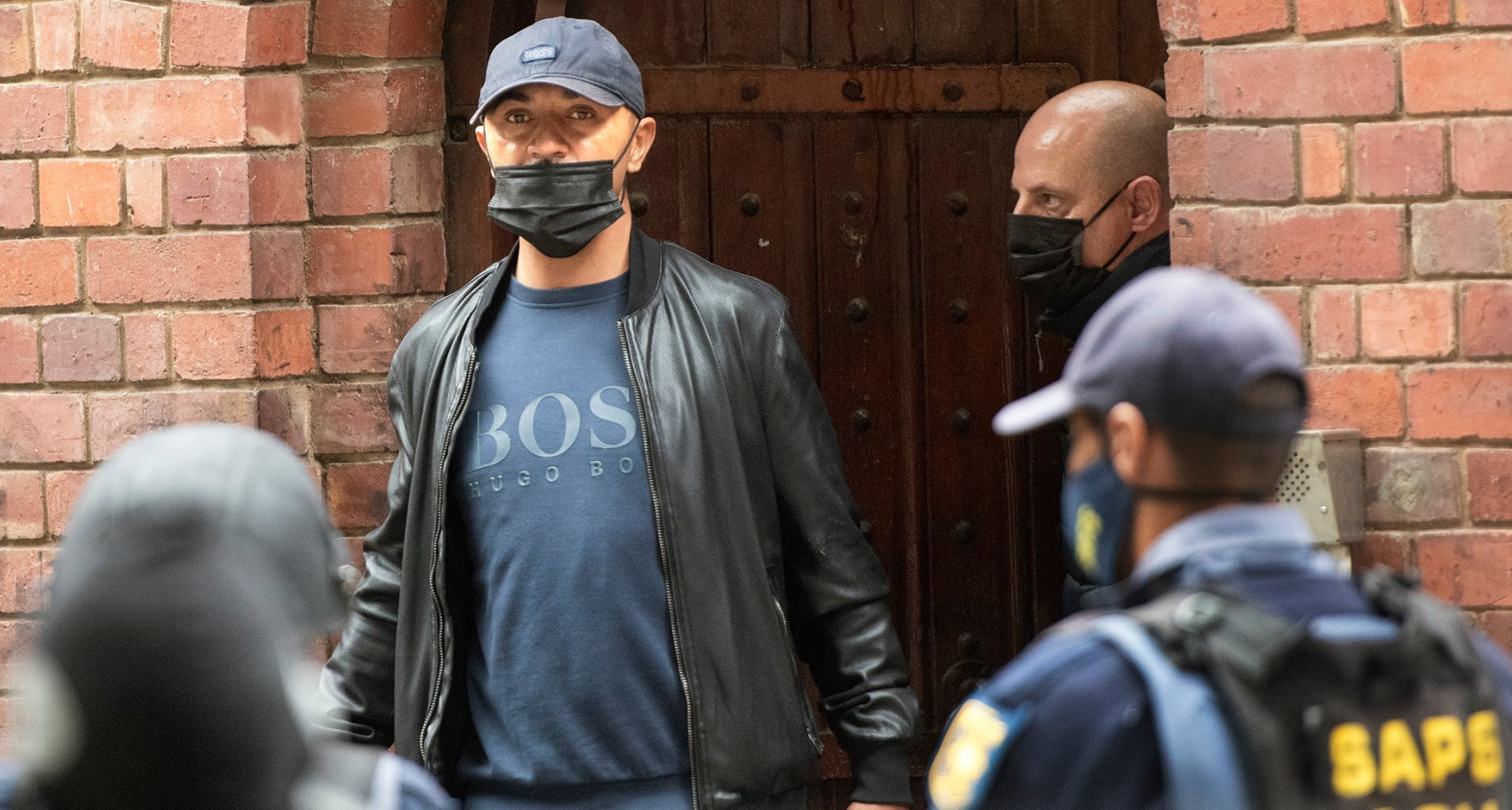 Nafiz Modack and co- accused appear at Cape Town Magistrate's Court on May 07, 2021 in Cape Town, South Africa. It is reported that Modack and co-accused face numerous charges, including intimidation, extortion, money laundering and kidnapping. (Photo by Gallo Images/ER Lombard)

Seven months after the assassination of Anti-Gang Unit (AGU) Lieutenant-Charl Kinnear, Nafiz Modack has been added as a second accused in the murder charge.

Initially, former rugby player Zane Kilian was the sole accused arrested shortly after the murder of Kinnear on 18 September 2020. On Friday, 14 May, Modack, appearing in the Blue Downs regional court, was added to the charge sheet.

The indictment consists of 62 charges and is a combined summary of incidents relating to the failed hand grenade attack on Kinnear’s home on 23 November 2019, his assassination, the failed hit on the life of criminal lawyer William Booth on 9 April 2020 as well as the pinging of both the cell phones of Booth and Kinnear and 21 other individuals.

Co-accused Jantjies and Adonis are in custody for the hand grenade incident and didn’t join the other five in the dock.

The State contends that the crimes were allegedly committed between October 2019 and September 2020. During this period there were five attempts at eliminating Kinnear in November 2019, the failed hit on Booth and the murder of Kinnear.

Charge 35 in the indictment reads: “Nafiz Modack and Zane Kilian upon or about 18 September 2020 and at or near 10 Gearing Road, Bishop Lavis, did unlawfully and intentionally kill Charl Kinnear.”

For the first time since the murder of Kinnear, the identity of “Mr X” whom Kilian claimed had instructed him to ping Kinnear’s phone, was revealed in charge 37, the contravention of Electronic Communication Act, of the indictment.

The court record in Killian’s earlier bail application indicated that Kinnear’s phone was pinged 2,408 times from March 2020 until the day of his demise.

The gang-related charges against Modack, Adonis, Jantjies and Tabisher relate to the events leading up to the failed hand grenade incident at Kinner’s home on 23 November 2019.

During the bail proceedings of Jantjies in the Parow Regional Court evidence was heard that Adonis is a member of the Junky Funky Kids (JFK).

The State further alleged that during the period October 2019 until September 2020, members of the JFK gang, on five occasions, allegedly conspired to murder Kinnear and acquired an explosive to bomb his house.

Because Modack is alleged to have been part of this plot the State has instituted gang-related charges against him.

Morgan, who is only facing a charge of money laundering, after agreement with the prosecution was released on R50,000 bail. He was placed under house arrest and with strict bail conditions.

Tabisher’s legal representative, advocate Bruce Hendricks, caused a stir when he stated that his client was unhappy with the manner in which the matter had been handled and was being treated unfairly.

“My client claims that AGU members and other officers knew what went on and that he is not prepared to take the fall for everyone.”

On Modack’s link to the death of her husband, Nicolete Kinnear said: “There is not much that I can say. I think Fridays, in general, are tough for us. Obviously with the new charges, it is overwhelming but I also think it is but the tip of the iceberg”.

She added: “As a family, you can say you want justice done, people arrested, but when you are face to face with it is a different ball game. At the end of the day their dad was their everything”.

Summarising events that transpired in Blue Down regional court, Hawks spokesperson, Lieutenant-Colonel Philani Nkwalase, confirmed that Modack had been arrested in connection with an assortment of charges related to the murder of Kinnear.

“Modack, 39, was allegedly linked to the police killing, following the arrest of Kilian, This now brings the total of two suspects charged for the murder of Lieutenant-Colonel Kinnear who was assassinated outside his home in Bishop Lavis, on 18 September 202o.”

Modack was also charged with attempts to murder Kinnear in the days leading up to a failed hand grenade attack at the detective’s home on 23 November 2019, said Nkwalase.

Modack, Kilian and Cronje are back in court Monday, 17 May for a bail hearing.

Later on Friday, the Hawks said Richard Morgan was also being charged with Kinnear’s murder.

On Tuesday, 18 May, the Western Cape high court will hear Kilian’s appeal against a decision by the Bellville Regional Court to deny him bail. Kilian wants the court to set aside the ruling and be released on bail. DM/MC