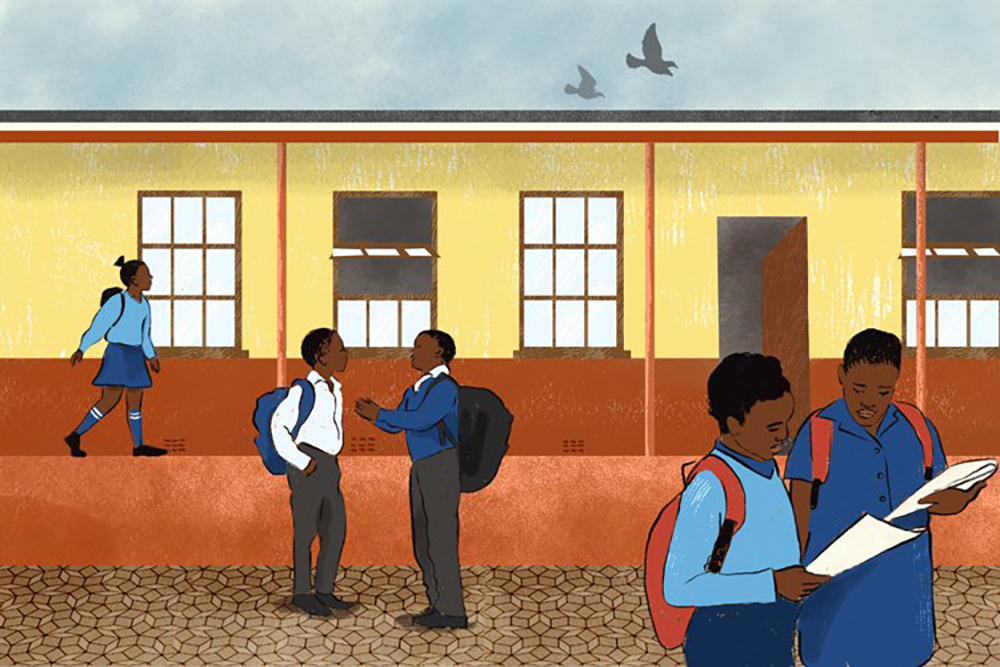 Learners who depend on the National Schools Nutrition Programme (NSNP) must get school meals during the Covid-19 pandemic, a court has ordered. (Illustration: Lisa Nelson)

Fewer than half of children received school meals from the National School Nutrition Programme (NSNP) this year while schools were open.

This is one of the findings of the fourth set of results from the National Income Dynamics Study – Coronavirus Rapid Mobile Survey (NIDS-CRAM) released on Wednesday.

The study looked at the changes in education during the Covid-19 pandemic and focused on school attendance and school feeding, and was based on the responses by 5,629 people from surveys conducted between 2 February and 10 March.

NIDS-CRAM researchers asked parents whether their children had received a school meal within the last seven days. Restricting this to the days when schools were open and children could receive meals, 43% of parents said yes.

The parents interviewed in the survey said that rotating timetables was the main reason for children not receiving school meals. These disruptions to school attendance led to further interruptions in learner access to school meals.

In 2020, the overall school year was reduced from 198 days to 156 days, and this year school reopening was delayed by nearly two weeks. During these periods of school closure and delays in reopening, many learners were not provided with school meals, the researchers found.

Speaking at the launch of the survey, the Department of Basic Education’s Nompumelelo Mohohlwane said, “At least 55 days of school meals were lost between March 2020 and March 2021 due to no schooling if you compare the overall number of school days in 2019 to 2020.

“However, these estimated days do not include diminished meal access affected by rotational attendance, and 55 days of lost meals is likely to be an underestimate.”

In July 2020 the North Gauteng High Court ruled that the Department of Basic Education must roll out the NSNP to all nine million qualifying learners, whether or not they were attending school.

The court also granted a supervisory order – that the education minister and eight MECs (in all provinces except the Western Cape, which had already committed to feeding learners, in or out of class) report back to the court on progress.

While learners were allowed to come to school for meals even on days when they were not attending school, the report estimates that the total lost days of meals could be as high as 133 out of 211 school days.

According to a report by Education Director-General Mathanzima Mweli, at least 1.5 million learners were still not receiving their meals by March 2021.

According to a joint statement by Equal Education (EE), Equal Education Law Centre and SECTION27, some provincial education departments had repeatedly failed to report on whether they were effectively rolling out the NSNP, despite the court order.

“This is an unbelievable and terrible neglect of responsibility that allows children to go hungry. This is an ongoing violation of children’s rights, and barriers to learners getting the school meals they are entitled to must be fixed urgently,” the statement read.

To prevent the further decline of learner access to school meals, NIDS-CRAM researchers are recommending the return to full-time school attendance.

“The issues at stake are critical. While international evidence initially recommended school closure, and responses by the government used the best evidence available, there is now a strong case for going back to full-scale school attendance,” Mohohlwane said.