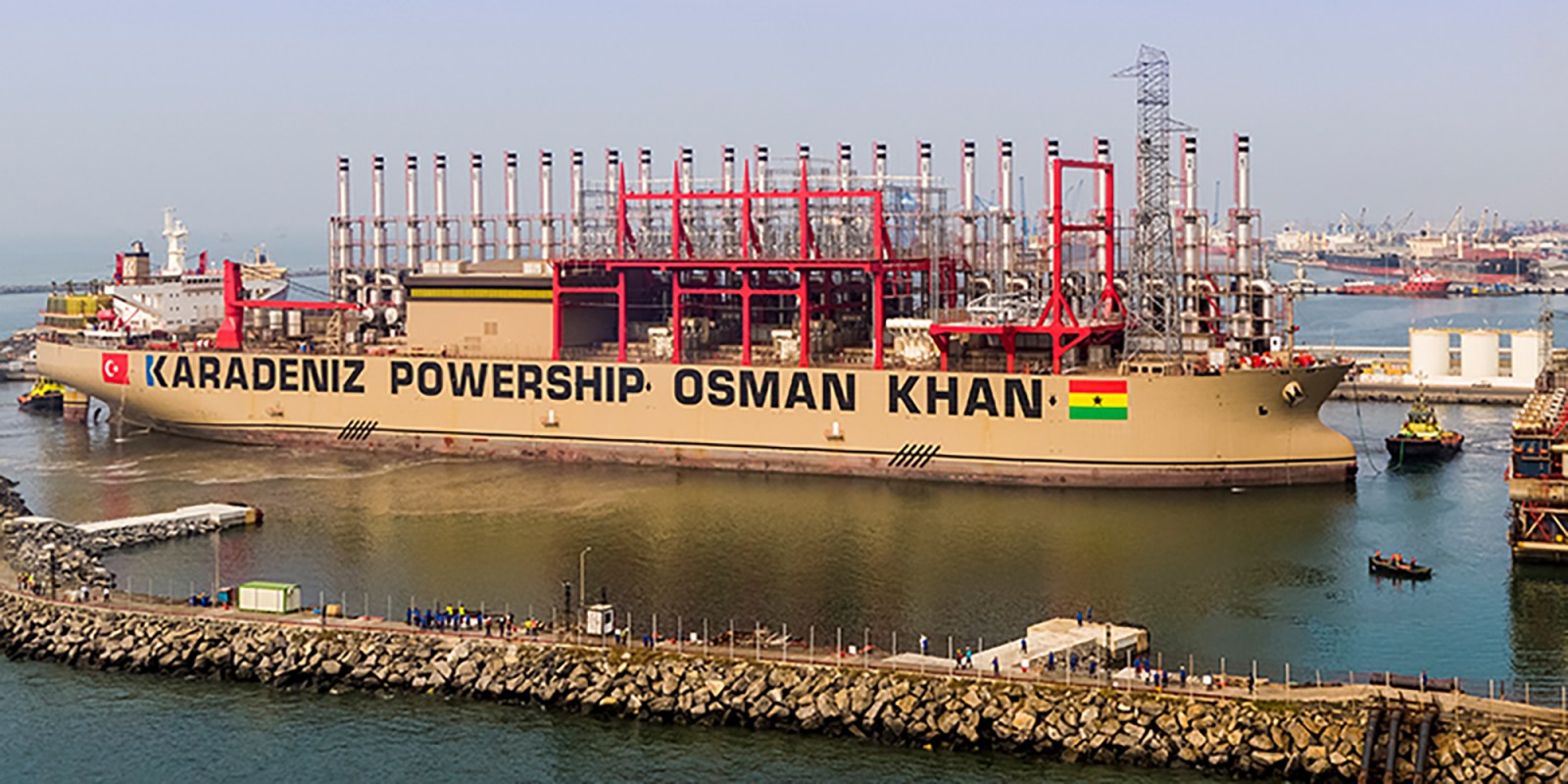 The emergency exemption from environmental impact studies in 2020 was based on claims that gas-burning Turkish power ships would somehow help to save lives at the height of the Covid-19 pandemic. (Photo: Karpowership)

A complaint has been lodged against an environmental consultant who played a leading role in facilitating a successful emergency exemption permit for a Turkish powership plan that was subsequently revoked.

The exemption permit would have allowed the company to bypass a mandatory environmental impact assessment (EIA) and public participation process, based on the claim that gas-burning Turkish powerships would somehow help to save lives at the height of the Covid pandemic and electricity crisis.

But this was revoked by Environment Minister Barbara Creecy on 25 August after the plan was exposed by Daily Maverick.

At the time, Creecy’s department acknowledged that there was “in fact no emergency situation” to justify an EIA exemption for the 20-year long, multibillion Turkish gas-to-electricity plan.

More recently, there has been further criticism of the estimated R200-billion cost of generating electricity for Eskom via five powerships in Richards Bay, Ngqura and Saldanha harbours.

A businessman has also claimed in court papers that the tender process was “grossly and blatantly flawed, corrupt and procedurally unfair”, while environmental law experts suggest that the Turks’ initial bid to skirt the EIA process seemed to be a deliberate attempt to exploit a potential loophole in section 30 of the National Environmental Management Act (NEMA), opening the door for other developers to also dodge public environmental scrutiny.

Now Howick-based environmental consultant Judy Bell has lodged a formal complaint with the Environmental Assessment Practitioners Association of South Africa (EAPASA), an authority set up through the government in 2012 to regulate the professional conduct of environmental assessment practitioners (EAPs) who are paid on a consultancy basis by developers.

The complaint, alleging professional misconduct, has been made against Aletta “Hantie” Plomp, the managing director of Ballito-based consultancy Triplo4 Sustainable Solutions, which is now belatedly completing a full EIA process for Karpowership SA, a subsidiary of the Istanbul-based Karadeniz group.

Daily Maverick has been trying to contact Plomp for comment via phone, text and email since 6 May, but she has not responded. EAPASA registrar Dr Patrick Sithole has acknowledged written queries on the matter, but has not responded to the questions sent on 4 May about the complaint against Plomp.

According to procedure, if the association receives a complaint “which prima facie points to improper conduct by an EAP” Sithole must refer the complaint to its professional complaints committee to determine whether the EAP should be charged.

But the registrar and committee are under no obligation to conduct a formal inquiry for every complaint submitted as “misunderstandings and disputes” involving EAPs may not amount to a breach of the Code of Ethical Conduct and Practice.

However, if Sithole decides to call for a formal investigation by the EAPASA complaints committee, Plomp will probably become the first consultant to face professional misconduct charges by the regulatory body, set up to ensure the professional competence of EAPs and to ensure practitioners act independently and impartially when assessing environmental impacts of development projects.

Because environmental consultants are paid by clients to assess and objectively describe harmful impacts that could potentially derail major projects, concerns have been expressed for decades about the need to prevent “sweetheart reports” tainted by financial influence.

Though EAPASA was formally established almost a decade ago, the association’s malpractice policy was developed only two years ago and only 404 EAPS are registered as members. There are no records on its website of any practitioner being sanctioned thus far.

According to the association, more than 2,000 draft membership applications have been lodged, but there have been several delays in the compulsory registration of EAPS.

In 2020, Creecy extended the compulsory registration deadline to February 2022. However, the association is still able to take disciplinary action against registered members such as Plomp.

As a body appointed in terms of the National Environmental Management Act, EAPASA says it is mandated to take measures against unethical EAPs to protect the public and the environmental sector.

“EAPASA has a responsibility of investigating any act of improper professional conduct and maladministration by an EAP such as acceptance of bribes,” it said in a statement last year.

All EAPs are also required to

Plomp, who has won several entrepreneurship and business awards, successfully applied for an EIA exemption to the Department of Forestry, Fisheries and the Environment in July last year, apparently after convincing senior department official Sonnyboy Bapela that the Turkish power plan was a critical “life-saving initiative” that could alleviate the Covid-19 crisis.

When Daily Maverick asked Plomp and the company last year to explain how the powerships would directly alleviate the Covid crisis, the company said its application was based on “the economic and health crisis arising from the Covid-19 pandemic”.

“Karpowership South Africa’s response will be critical to mitigating and containing the impact of the disaster. The factual evidence submitted by Karpowership includes: studies on impact of healthcare facilities of lack of power supply; pronouncements from government on the pandemic; daily statistics showing trend of effect of Covid and NICD projections on infections and deaths and Eskom’s supply-side failure and load shedding up to August 2021.”

In a letter to affected interest groups in Richards Bay, Plomp further sought to justify the exemption letter she signed on the basis that the powership plan was linked to the National State of Disaster Act and would be “a significant contribution to life-saving initiatives through secured energy supplies within the shortest time period”. 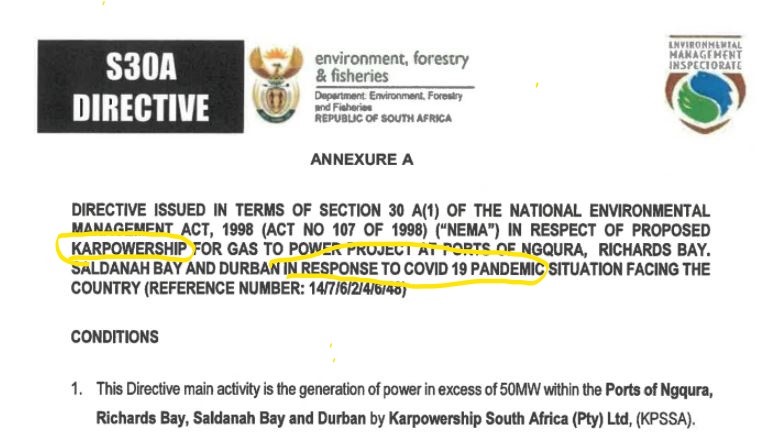 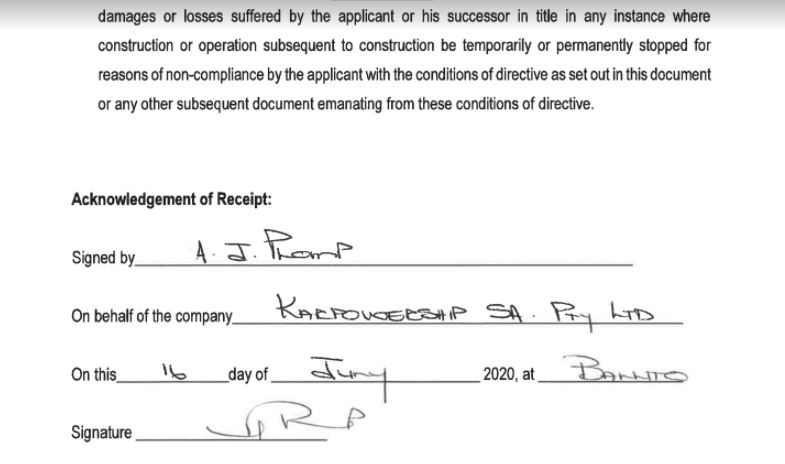 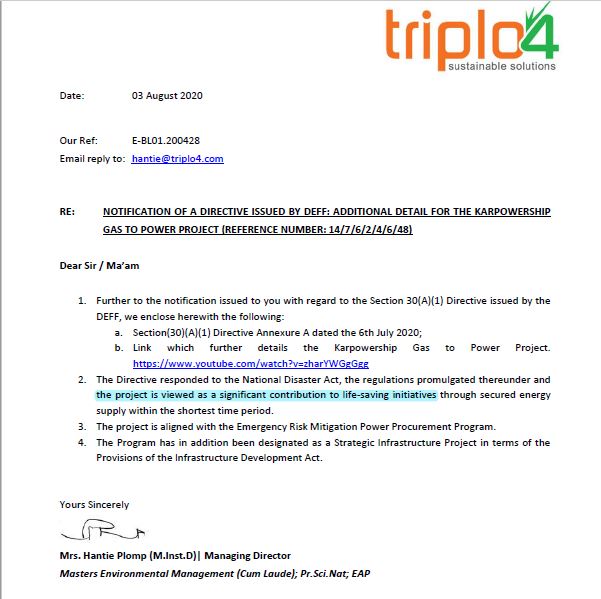 Karpowership sales director Patrick O’Driscoll said: “Although the energy crisis is not new, the need for a reliable and sustainable power supply is required to safeguard critical infrastructure and maintain industry such as the manufacturers and industries that support the medical fields.

“This is critical in terms of immediate and emergency efforts to ameliorate the impact of Covid-19. The increased supply of medical PPE equipment (particularly for front line workers), oxygen supplies and waste removal, for example, all require a steady electricity supply to maintain and manage the demand on their products… It is also vital for post-Covid-19 national recovery strategies.”

At the time, environmental law experts expressed astonishment. Jeremy Ridl, a former environmental law professor at the University of KwaZulu-Natal, said: “There is so much wrong with this it is hard to know how to respond.”

Assuming that section 30A could be used to bypass the EIA regulations, the sites would still have to be assessed, he said.

“How can this be done when no site has been identified and approved by the Ports Authority? You cannot get blanket approval for activities that are listed, but unspecified and whose impacts are completely unknown.”

Ridl commented at the time that Plomp may have been acting in good faith. If so, making the application seemed to reveal a lack of knowledge of the law that was required of an EAP and a professional natural scientist.

He commented that if the “bizarre” exemption application turned out to be legal, it would mean that EIAs for most projects would become unnecessary.

“Conceivably every development project or farm produces some or other social or economic benefits that will help to combat the many impacts of the Covid-19 ‘disaster’… This is far too remote from the clear intention and purpose of section 30A,” Ridl suggested. DM