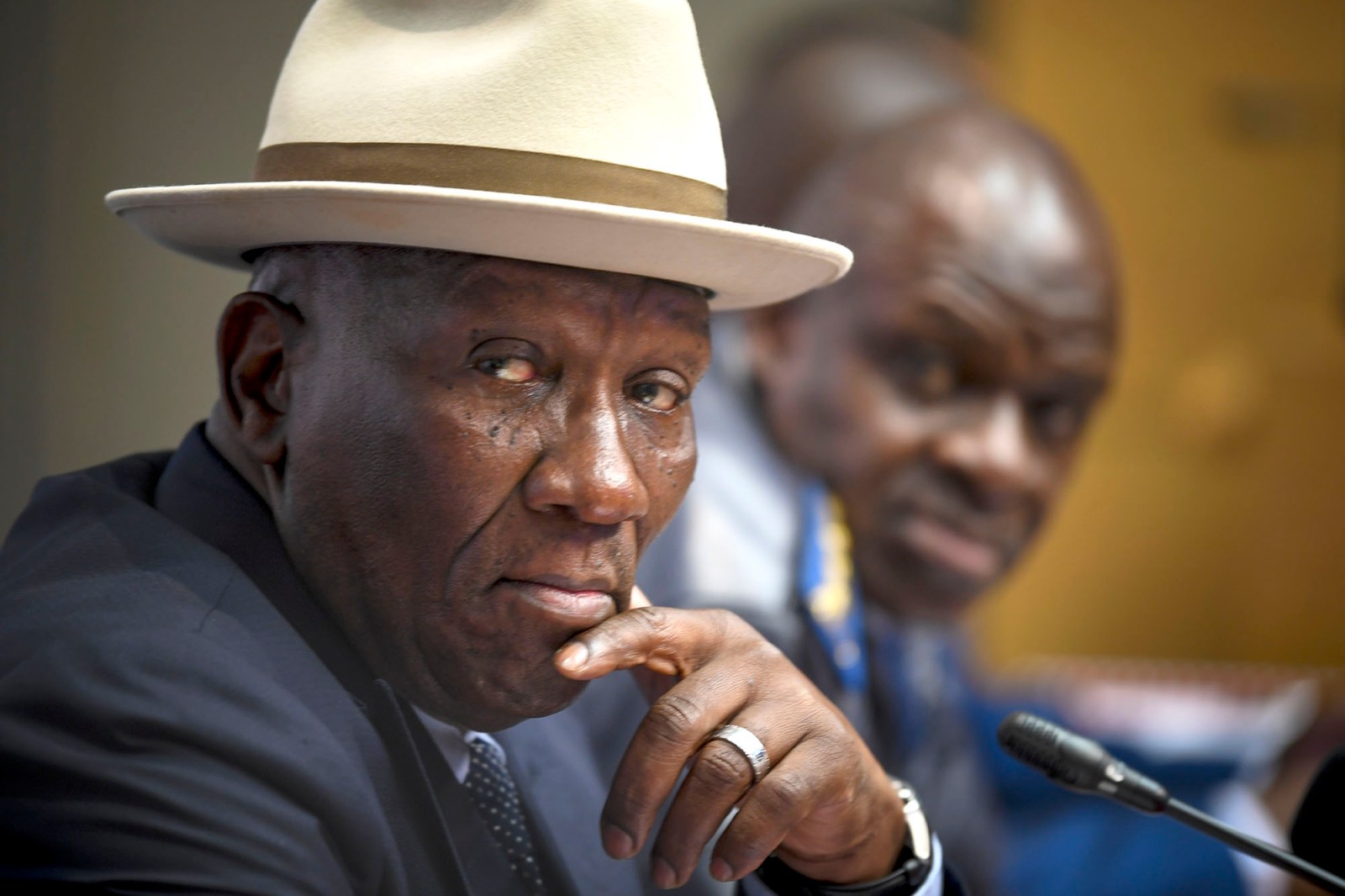 The minister of police wrote a strongly worded letter to the national commissioner after the latter announced – in Parliament – several appointments that went against instructions the minister had given to him.

A frosty standoff between the two figures in charge of South Africa’s police – National Police Commissioner Khehla Sitole and Police Minister Bheki Cele – has become even more fraught with Cele this week saying Sitole’s “disregard” for him will not be tolerated.

On 4 May, Sitole announced four senior appointments in the SA Police Service during a meeting in Parliament.

But it turns out he went against Cele’s instructions, who has deemed the appointments irregular and invalid.

This has exposed even more bad blood within the police service, which has been rocked by factionalism as well as claims and counterclaims among officers.

DM168 has previously reported that Cele called for an inquiry into Sitole’s fitness to hold office. This related to the classification of documents linked to Crime Intelligence’s allegedly unlawful procurement of a surveillance device known as a grabber at an inflated price of R45-million (when the usual price was a comparatively low R7-million) ahead of the ANC’s elective conference at Nasrec in 2017.

Sitole subsequently approached President Cyril Ramphosa to hold off on the inquiry so he could have a chance to explain his side of what transpired.

Fresh tensions between Sitole and Cele surfaced this week. These stemmed from Sitole’s announcement on 4 May that new provincial commissioners had been appointed in KwaZulu-Natal and Limpopo. Briefing the Parliamentary Portfolio Committee on Police, he also said the service’s forensic and crime detection divisions had merged because of certain “constraints” and that a new divisional commissioner had been appointed to head this unit.

In addition, Sitole said a lieutenant-general was appointed to head the police’s merged visible policing and operational response services division.

He referred to those appointed mostly by their rank and surnames.

After announcing these appointments, he told the portfolio committee: “Other appointments shall be announced after endorsement by the minister.”

Sitole, therefore, appeared to be pointing out that appointments first needed the nod from Cele. But Cele, in a strongly worded letter to Sitole, effectively said that Sitole had bulldozed through Cele’s own, different view on the appointments Sitole announced on 4 May. Cele also seemed to nullify the appointments, saying they were invalid.

DM168 has seen the letter to Sitole, dated and signed by Cele on 5 May.

In it, Cele referred to a meeting he had had with Sitole in Pretoria West on 15 April.

“Despite the fact that I gave clear instructions to you, you still went ahead and announced the appointment of Senior Managers, in key positions, during a briefing to the Portfolio Committee on Police…

“As instructed, during the meeting held on 15 April 2021, you were supposed to submit a new submission in respect of the appointments we agreed on, for my consideration and concurrence.”

Cele said his office had not received this new submission. He also referred to an appointment the deputy national commissioner of crime detection, Lieutenant-General Sindile Mfazi, had announced. The appointed person is unnamed, but Cele said he had “telephonically instructed” Sitole to tell Mfazi to “retract his statement”, but this, he said, had not happened.

“You, therefore, blatantly ignored my instructions and the provisions of the SAPS Employment Regulations, 2018, when you went ahead and announced these appointments,” Cele said to Sitole in the letter.

“Your disregard for my position as the Executive Authority of the Department of Police and relevant regulations is regarded as serious and will not be tolerated. Your irresponsible actions further opened the Department to possible litigation and disputes.”

Cele said the appointments Sitole had announced were invalid and considered irregular. “I herewith instruct you to retract the appointments with immediate effect… Your blatant contempt of my Executive Authority was also brought to the attention of the Chairperson of the Portfolio Committee of Police as well as the consequences of your actions.”

This week national police spokesperson Vish Naidoo declined to comment on the letter.

“It is rather unfortunate that someone would choose to leak any correspondence between two offices to the media,” he said.

“We will not respond to any query based on any communication between the office of the Minister and National Commissioner.”

Asked who headed the positions that Cele had referred to in Parliament on 4 May, Naidoo told DM168:

Limpopo’s commissioner was “General Radebe”, although the official police website said it was Lieutenant-General Nneke Ledwaba;

The head of the forensics division was one “General Sentemule”; and

The head of merged visible policing and operational response services was a “General Mohtlala”, understood to be Lieutenant-General Michael Motlhala, who previously headed the forensics division.

This tallied with what Cele had told the police portfolio committee on 4 May.

It was, therefore, not clear what effect Cele’s letter to Sitole, saying the appointments were invalid and should be retracted, had.

Police ministry spokesperson Lirandzu Themba did not respond to a DM168 query about the matter by the time of publication.

Speaking to News24 on the same issue this week, she said the ministry would not be commenting on the letter.

Tensions between Cele and Sitole first started showing when Sitole was seen as pushing ahead with the suspension of, among others, Lieutenant-General Peter Jacobs, who headed Crime Intelligence.

Jacobs’s controversial suspension, which came into effect late last year, was lifted last month. But, instead of being allowed back to his Crime Intelligence position, he was instead placed as the head of the police’s inspectorate division.

In the Jacobs matter, Cele had stepped in when Jacobs wrote to him to point out that he believed a disciplinary process against him was effectively unlawful.

Cele had written to Sitole, saying his office needed to urgently deal with Jacobs’ allegations. DM168