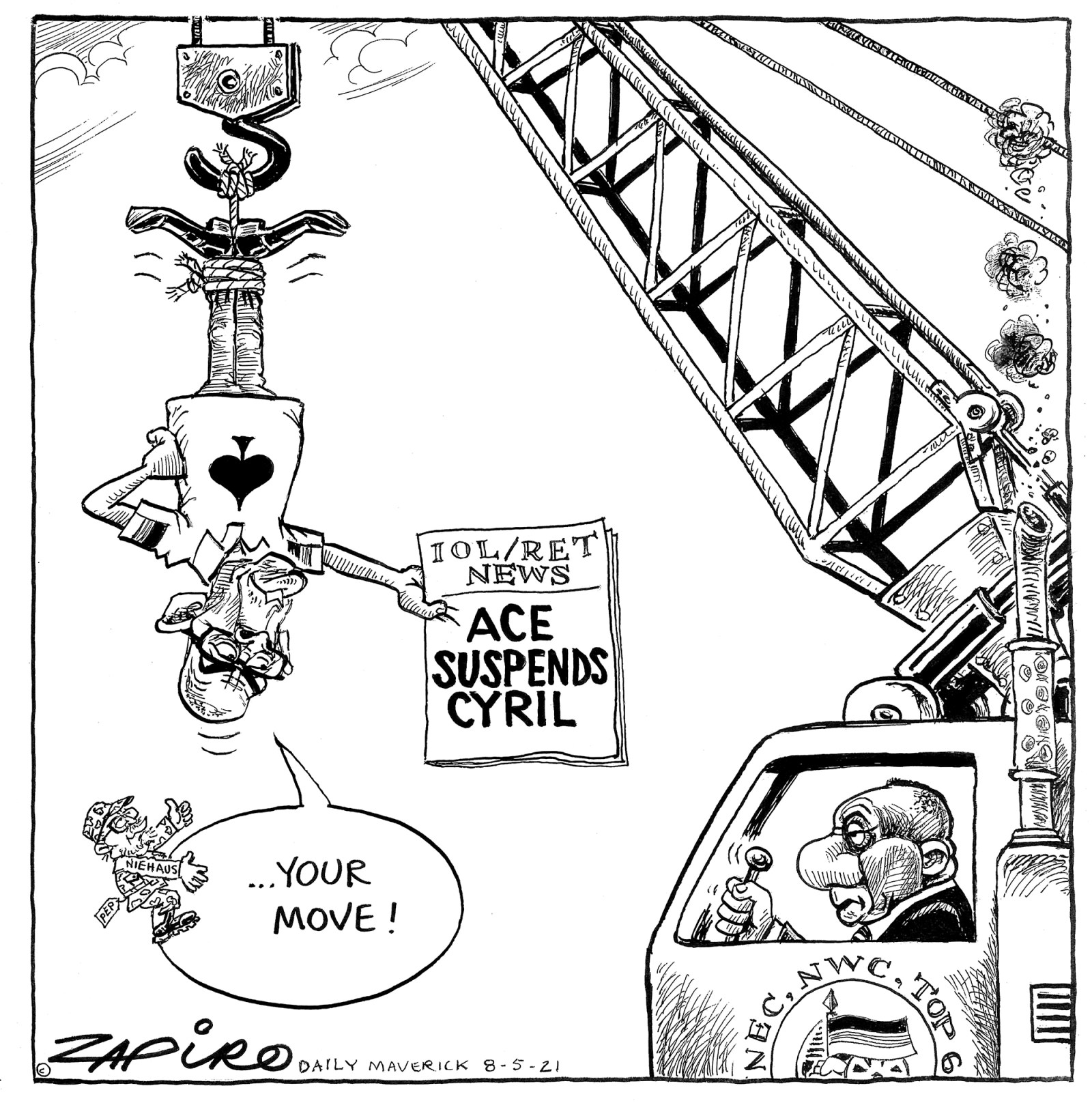 The governing party leadership battle is coming to a head, with this weekend’s National Executive Committee meeting expected to rubber-stamp the National Working Committee's decision to suspend Secretary-General Ace Magashule with immediate effect.

In an ironic twist of fate, the day that embattled ANC Secretary-General Ace Magashule sought to counteract his suspension and openly defy his party was the same day one of his exemplary predecessors, Walter Sisulu, died in 2003.

On 5 May 2021, Magashule stunned many inside and outside the ANC when it was discovered that he had written a letter, dated 3 May, purporting to suspend party president Cyril Ramaphosa – without a mandate from any structure.

That it came to such a cringeworthy episode, with the highest-ranking leaders of the party engaging in a tit-for-tat exchange, was perhaps a sign of how the ANC has deteriorated. It is nothing like the party once led by illustrious black intellectuals like Sisulu, who was elected ANC secretary-general in 1949.

For some in the ANC, Magashule’s odd move was the last straw. He could now be expelled from the party. Some National Executive Committee (NEC) members want him charged with “misconduct” for his behaviour.

Magashule defiantly said he will attend the NEC meeting on Saturday morning. In an interview with the SABC, he said: “I will attend the meeting. I am the secretary-general of the ANC.”

He accused Ramaphosa of using his dominance in the ANC NEC to ram down the decisions on those who oppose him.

“The ANC has been factionalised. The resolutions have been factionalised. I will never allow any individual to take the ANC from me. I’m waiting for whatever process to unfold because I  have appealed. I’m saying to the branches of the ANC throughout the country, relax, I’m the SG of the ANC.”

ANC NEC member Mondli Gungubele told DM168 that the events of Wednesday night showed the party in a bad light.

“If this represents the relations in the organisation currently … it is the lowest point. If we differ on such basic issues like the [principle of ] equality before the law of this country, it’s the lowest point.

“The problem with the current debate [on the step-aside resolution] is that it’s an embarrassing debate about whether we should deal with corruption or not. What makes it even more uglier is that 99% of the people charged with corruption are against stepping aside. It exposes a high level of subjectivity,” said Gungubele.

Gungubele said the defiance of some ANC leaders has the potential to undermine the work of law enforcement agencies in the country.

“This type of debate by the governing party casts serious aspersions on law enforcement agencies in this country. It has the potential to send fears to those in the law enforcement space … to scare them, where they question whether those charged will not be elected to powerful positions in future.

“It threatens the objectivity in the legal system in the sense that there are those who are not strong enough who might start thinking about their future. It is a serious thing that must be stopped,” said Gungubele.

Gungubele is one of the outspoken ANC NEC members who is unequivocal about the party’s need to restore its image and deal with corruption within its ranks.

Without mentioning Magashule by name, Gungubele called for tough action to be taken against anyone who defies the directives of the party.

“The conduct of anyone who undermines the conditions of discipline [of the party] always calls for sterner action… That person is asking for trouble,” he said.

The calls for Magashule to be hauled before a disciplinary committee have been expressed by other leaders of the ANC, who feel that his behaviour is anathema to the party – especially from someone at his level. One ANC NEC member likened Magashule’s behaviour to that of a branch member from a rural ward.

“The problem with Ace is that he never transitioned from being a regional, provincial leader. He still behaves as though he’s in the Free State, where he did as he pleases. This is a national stage and he does not quite get it,” said an NEC member who once worked closely with Magashule.

He is just fighting for his position, but once the NEC decides [on a matter] he can’t go against that. It’s easy to undermine [the] NWC but not the NEC. The decisions of the ANC don’t depend on the acceptance of the individual.

Now the question of whether he will attend this weekend’s NEC meeting – after being served with a suspension letter by his deputy, Jessie Duarte – is part of the consideration by Magashule’s informal advisors who want to avoid further embarrassment for him.

In an impromptu press conference on Friday, 7 May, ANC spokesperson Pule Mabe was at pains to deal with the issue of Magashule attending the meeting or not, but could not give a clear answer.

“Everyone expected to attend the NEC meeting will attend,” was Mabe’s readymade response.

Perhaps the reality is that, until this morning, no one in the ANC knew whether the virtual three-day meeting’s online link will be shared with Magashule. He has, after all, been suspended.

The ANC leadership has also probably realised that they may have blundered by allowing Magashule to continue in his position during the 30-day grace period, when he was afforded the courtesy of “consulting” with party leaders.

The NEC meeting of 26-28 March 2021 had already concluded the issue of the step-aside requirement for those charged with corruption. Yet Magashule’s request that he be able to make further consultations during the same period was granted by the NEC.

At the National Working Committee (NWC) meeting of 3 May, which all the ANC top six officials attended, none of the leaders were bold enough to tell Magashule that Duarte would immediately assume the role of  acting secretary-general.

This also explains his unexpected response when the suspension letter, sent to Magashule’s chief of staff, was leaked.

ANC leaders believe the letter was leaked deliberately, as part of Magashule’s fightback.

An NEC member sympathetic to Magashule said the troubled former Free State premier – who is out on R200,000 bail, having been charged with fraud and corruption in the Free State asbestos case – was still weighing his options.

“If he insists on coming, no one will stop him. It will give the NEC an opportunity to regularise his suspension [because] he may want to argue that the DSG [Duarte] does not have the authority to suspend him.

“What NWC should have done was to come to NEC and regularise the appointment of [Duarte] as the acting secretary-general. That did not happen, so if [she was] not appointed as acting SG by the NEC, on whose behalf was she acting? Remember, even if things are written in the [ANC] constitution, they must still be processed to regularise them.

“The NWC should have advised the SG that he is becoming ineffective,” said the NEC member – although he admitted that the argument was merely a technicality, because Magashule’s suspension was inevitable.

Magashule’s antics were a cry for attention, said the same NEC member.

“He’s seeking attention. We will be clumsy to say he must be expelled. That argument won’t hold. In the ANC, it’s only the incorrigible that are expelled. The SG has not reached that point.

“He is just fighting for his position, but once the NEC decides [on a matter] he can’t go against that. It’s easy to undermine [the] NWC but not the NEC. The decisions of the ANC don’t depend on the acceptance of the individual,” he said.

The NEC is expected to rubberstamp the NWC’s earlier decision to suspend Magashule and others charged with corruption. Compounding this issue is that some ANC leaders – like ANC KZN deputy chairperson Mike Mabuyakhulu and JB Marks mayor Kgotso Khumalo – have already stepped aside, in line with the resolution. As a senior leader, more is expected from Magashule.

Also, Magashule does not enjoy the support of the NEC. The recent vote at the March 2021 NEC meeting to fill a vacancy in the NWC proved that Ramaphosa has the upper hand. The president’s grouping favoured Gwen Ramokgopa to replace NomaIndia Mfeketo – who is now an ambassador to the US – whereas Magashule’s grouping preferred State Security Minister Ayanda Dlodlo. Ramokgopa won by 53 votes to Dlodlo’s 36 votes.

Ramaphosa also seemed unfazed by Magashule’s defiance when the president addressed the ANC’s parliamentary caucus on Thursday afternoon ahead of his appearance in the National Assembly.

The president “ridiculed” Magashule’s letter of suspension to him, according to one MP who attended the meeting.

The NEC meeting will end on 10 May. It will consider all the reports of the party’s Integrity Committee, including reports on other party members who may have brought the party into disrepute but are not facing direct criminal charges. DM168