‘Thick, thick, thick’ murder accused Zane Kilian pinged and debt-collected for me, but is no killer — lawyer 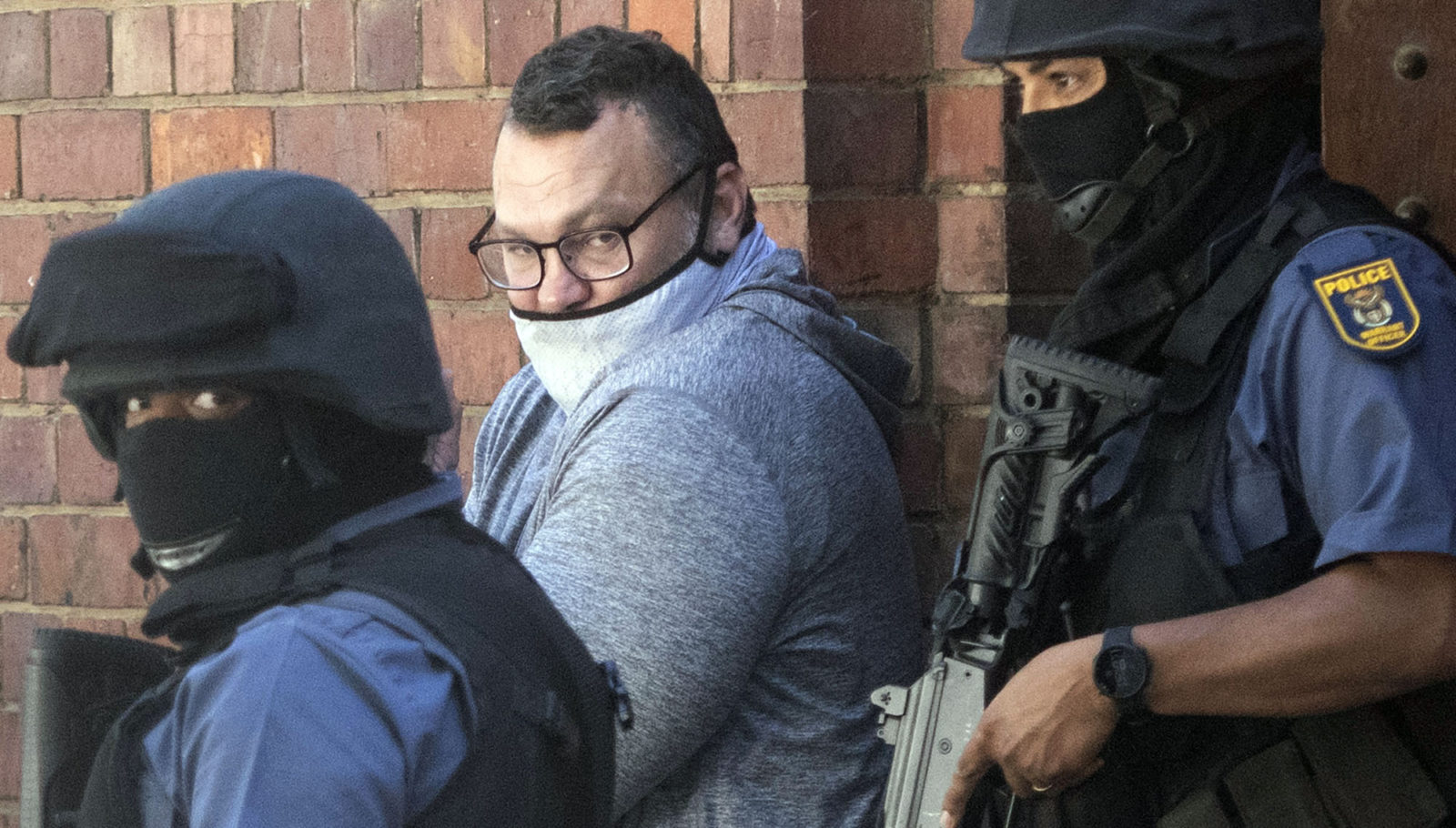 Eric Bryer, the lawyer of Charl Kinnear murder accused Zane Kilian, has made startling comments about his client — and himself — including that: ‘I… have used him to debt collect and he sent me a few photographs of people with their heads chopped off to intimidate people to pay. But he’s a gentle giant.’

Attorney Eric Bryer (65) spoke about his client Zane Kilian in a nearly 50-minute interview with presenter Izak du Plessis on the Afrikaans current affairs and news podcast, Nuuspod, also uploaded as a video to YouTube on Monday.

Du Plessis said on the podcast that the interview was made possible by economist Dawie Roodt and financial services provider Efficient Private Clients, which Roodt chairs.

Kilian is accused of playing a role in the 18 September 2020 murder of Lieutenant-Colonel Charl Kinnear who was assassinated outside his Bishop Lavis home in Cape Town.

He also faces charges in connection with the attempted murder of attorney William Booth, who was shot at outside his Cape Town home on 9 April 2020 — a case in which underworld suspect Nafiz Modack now also faces charges following his arrest last week.

Bryer represents Kilian in both cases. He previously represented Czech criminal Radovan Krejcir and was himself once accused of criminality, which he denied.

During the Nuuspod interview, Bryer made some startling, and in some instances seemingly disparaging, comments about Kilian — as well as remarks that could be viewed as self-incriminating.

Bryer told Daily Maverick: “I’ve got a big mouth but I’m a nice person.” He maintained that he had spoken the truth on the podcast.

During the interview, he said: “Zane is my client. I love him to death. But he’s one of the thickest people I’ve ever met on this earth.

“He’ll probably punch me in the jaw for saying so. But really, to talk to him is like talking to a wall sometimes… you don’t know if the brain is switched on.

“I want to klap [smack] him so many times, but he’s eight times the size of me and I wouldn’t last one punch from him. But he is thick. Thick, thick, thick, that’s for sure.”

At another point, Bryer referred to Kilian as a “gentle giant”.

“There’s no way on this earth I could imagine him killing anyone. Maybe he would smack somebody to get money out of them, but there’s no way he would ever be party to a murder.”

He pointed to Kilian’s background — that of the son of a former policeman who had “45 years’ distinguished service”.

But Bryer also spoke about what seemed to be questionable activities.

He said he used Kilian’s so-called services, including debt collection and “pinging” — tracking the location of a particular cellphone using the coordinates of cellphone towers it connects with.

This is what Kilian is accused of doing in the Kinnear murder case.

In the Nuuspod interview, Bryer said: “Zane is in breach of the Telecommunications Act, there’s no doubt about it. But that’s where the bus stops. He pinged left, right and centre.”

Bryer also said he had got Kilian to ping a relative of his. “(Kilian) pinged him a thousand times for me because I was worried about his safety…

“I used to phone and say, ‘please ping the guy’… He’d never question me… He took me for my word and just did so. And then two minutes later I got the location.”

Bryer said many figures were involved in pinging.

“I represent a number of security companies to trace motor vehicles etc, and to find people who are hiding away and not paying their debts. It was the most useful way ever to be able to locate them.”

He added that he paid Kilian for every ping, “so I had to give him lots of money”.

Bryer said he had established that two of South Africa’s most prominent cellular networks could ascertain the origin of a ping and he found it “a disgrace” that the team investigating Kinnear’s murder did not determine and disclose this information.

“I’m not saying for one minute that Kilian did not ping Kinnear,” he said, but added that there was no way Kilian did this 2,400 times, as was reported.

“I maintain that there were other people pinging (Kinnear) at the same time.”

Bryer, who had met Kinnear and described him as “helluva decent”, said the cop had “the most horrific job ever”.

“He had a multitude of enemies, from his own police team to other gangsters to international arms developers.

“There was probably a queue to eliminate him, but we don’t know who jumped the queue and got there first. That is a mystery to everybody.”

Bryer said he could not understand how the gunman who shot Kinnear had not yet been identified, especially with the technology and resources police had at their disposal.

“In the old days, within 72 hours the shooter would be identified,” he said.

Bryer said legal processes around his client were hampered by delays, some brought on by Covid-19, but also by postponements and courts being switched, leading him to believe “something just doesn’t make sense” with the Western Cape’s judicial system.

“Zane Kilian has been treated differently to any other accused in South Africa. There’s no doubt about it.

“Murderers, rapists, arsonists, they all get bail immediately. Zane Kilian has been singled out… I’m convinced.”

Kilian, who was denied bail in March, is pushing ahead with an appeal in an attempt to secure his release. This is set to be heard in the Western Cape High Court on 18 May.

Modack was arrested yet again last Thursday, 29 April, on a growing list of charges.

Previously, during court matters centred around Kilian, it emerged that a figure identified only as Mr X had asked Kilian to ping Kinnear’s phone. There has been widespread speculation that Modack was Mr X.

In the Nuuspod interview, Bryer said Kilian had phoned him on Saturday morning following Modack’s arrest. Bryer used the opportunity to ask Kilian if he had told an investigator Mr X’s real identity, which “he denied vehemently”.

During the interview, Bryer also touched on policing in the Western Cape, which is known as being factionalised.

“Every policeman you speak to in the Western Cape, you don’t know which side they’re on.”

He also had harsh words for the witness protection programme, saying that even if Kilian decided to become a Section 204 witness, which would mean testifying for the state in the hope of indemnifying himself, his safety could not be assured.

“At the end of the day, I don’t know who killed Kinnear… Kilian knows a lot more than he’s told me.

“Even if he wanted to 204, he’d be taken out, his family would be taken out… so what the fuck do you do in a situation like that? The only thing you can do is go to Israel and pick oranges on a farm and hide your identity because they’ll find you here, because, you know, the witness protection programme in South Africa is a fuck-up deluxe.”

(The National Prosecuting Authority’s 2019/2020 annual report said: “For the past 18 years, no witnesses or related persons were threatened, harmed or killed while on the programme.”)

Contacted on Tuesday about the Nuuspod interview, a confident Bryer said he stood by all he said.

“Everything there is an open agenda. I spoke the truth and nothing but the truth,” he told Daily Maverick.

Asked if he was worried that his comments about hiring Kilian to ping for him would lead to legal trouble, he said: “I’m not in fear of anything.”

Bryer, originally from Durban, said he had been practising as an attorney for most of 15 years (the Legal Practice Council in KwaZulu-Natal confirmed to Daily Maverick that he is registered as a practising attorney).

He said he practised with a colleague in Johannesburg. “I’m an old campaigner, an old judicial officer… I’m not there to cover up.”

Bryer previously had a brush with the law — in April 2018 it was reported he had been charged with corruption and defeating the ends of justice after allegedly getting personally involved in a kidnapping case while representing a client in Johannesburg.

He said the charges against him were later changed to kidnapping and that in August 2020, the case was struck from the roll.

As a result, he said he was suing the state for R100-million.

Given the nature of his work, Bryer said he understood that he would sometimes be targeted.

Returning to the case against Kilian, he said: “I don’t know if he’s a full box of chocolates. I just think he’s been given a raw deal.” DM