AGE OF THE ASSASSIN: NEWSFLASH 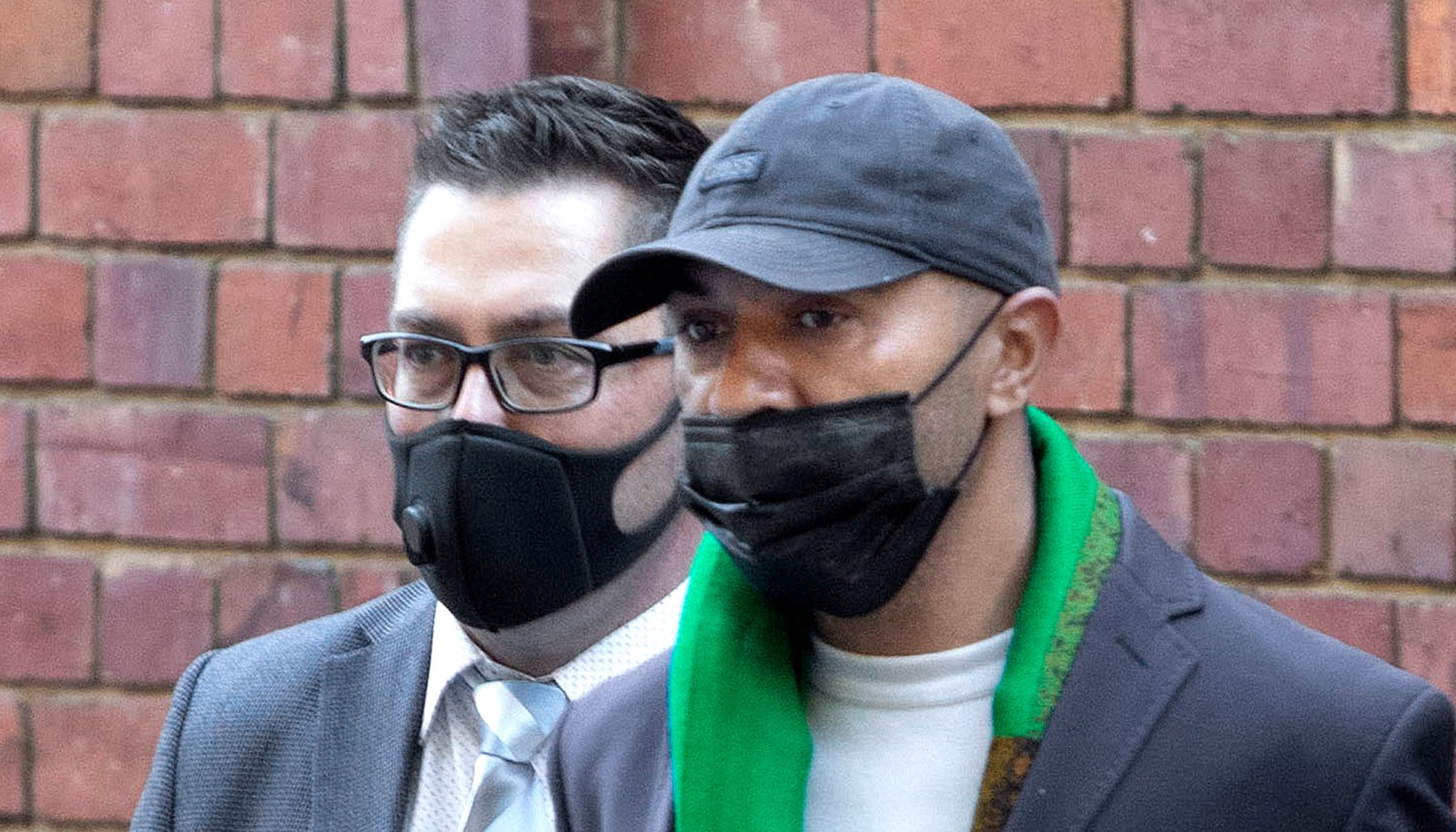 Nafiz Modack, led by Lieutenant Colonel Eddie Clark who has been leading the investigation in Charl Kinnear's murder, leaves the Cape Town Magistrates Court following a court appearance on Monday 3 May 2021. He and two other suspects, Jacques Cronje and Ricardo Morgan, were arrested on Thursday 29 April 2021 following investigations by the Anti-Gang Unit and a special task force. (Photo: Leila Dougan)

The alleged underworld figure will face charges of attempted murder and the illegal interception of communications relating to the failed assassination bid on prominent Cape Town lawyer, William Booth.

The growing case against Modack, 30, was revealed on Monday, 3 May 2021, in the Cape Town Magistrate’s Court where the “businessman” appeared alongside co-accused Jacques Cronje, 50, and Ricardo Morgan, 36.

Emanating from his arrest on Thursday, 28 April, Modack also faces further charges of attempted murder, reckless driving and resisting arrest. It is alleged that he tried to run over one of the officers carrying out the arrest.

On the conspiracy to commit relating to Booth, the state alleged that Modack and murder accused Zane Kilian, on or about 9 March 2020 until 9 April 2020, conspired to “unlawfully or intentionally murder Booth”.

“On the contravention of the Electronic Communications Act, Modack and Kilian, from 6 March 2020 until 18 September 2020, unlawfully intercepted the cellphone of William on 658 occasions,” read the charge sheet.

Kilian is already facing charges of murder, attempted murder and the illegal interception of cellphones relating to the assassination of Kinnear on Friday, 18 September 2020 in front of his Bishop Lavis House.

Affidavits handed in by the Hawks indicate that Kilian pinged Kinnear’s phone 2,408 times until his demise.

On a separate charge of intimidation, the state contends that Modack and Cronje, on or about 9 March 2020 near the Crystal Towers Hotel, Railto Road, Century City, had threatened Sameer Vallie for money owed.

According to the indictment, Modack and Cronje: “Are guilty of kidnapping in that they on 9 March 2020 unlawfully and intentionally deprived Sameer Vallie of his freedom by keeping him in a boardroom at Crystal Towers and threatening him until he signed an admission of debt for R600,000 owed to Shamil Maharaj and forced him to do an immediate EFT to the amount of R90,000 into an account”.

The state further argues that Modack, Cronje and Morgan contravened the Prevention of Organised Crime Act (Poca). It is further alleged that Modack and Kilian, on 11 March 2020, wrongfully and unlawfully intercepted, on three occasions, the cell phone of Vallie.

Prior to the court proceedings getting underway, barbed wire was used to cordon off a section leading to the courtroom. A water cannon was on standby and heavily-armed AGU and Public Order Policing (POP) members secured the premises.

Inside court, armed AGU members flanked Magistrate Ronel Oliver and provided protection to the prosecution and the accused.

State prosecutor Blaine Lazarus, in his opening remarks, told the court that further cases will be added and that the different cases needed to be consolidated so that all matters can be dealt with collectively. He indicated the state would oppose bail.

Irfaan Parker, acting for Modack said: “On Thursday, 29 April, my client was charged with attempted murder of an advocate and the murder of a police officer. This was reflected in the first statement sent out by the Hawks.”

However, said Parker, on Friday, 30 April, the murder case had been retracted.

The hand grenade charges against Modack come after the prosecution played back recordings and produced Whatsapp messages between Modack and Amaal Jantjies.

Jantjies, along with Farez Smith and Janick Adonis, is facing charges related to being part of a gang, five counts of conspiracy to commit murder and acquiring an explosive.

This relates to the failed hand grenade attempt on 23 November 2019 at Kinnear’s house in Bishop Lavis.

On Friday in the Parow regional court during the continuation of the bail proceedings of Jantjies said: “A member of the Tactical Response Team attached to the AGU known as Tabisher agreed for a fee of R10,000 that he would give information on when raids were supposed to be carried at Modack’s residence and who are the people feeding the AGU information about him.”

Whilst the matter of Modack was heard in the Cape Town Magistrate’s Court, Hawks spokesperson, Colonel Katlego Mogale, released a statement saying a 39-year-old member attached to the Tactical Response Team was arrested over the weekend.

Commenting on the police officer who allegedly colluded with an underworld figure, Cele said: “We have said being a police officer is an honourable job. Keep you blue, if you don’t want to keep you blue we don’t hesitate to convert it for you to orange.

“The guy who is in one of our elite units opted to be greedy and work with the underworld. So he is not one of us, we will treat him as such, it is his choice. So he must live with his choice.”

Clarifying the two conflicting statements issued by the Hawks, one stating that Modack had been arrested in connection with the murder of Kinnear and a retracted second statement, Cele said: “We have seen the guys on the court on Monday. There will be other guys joining them after that there will be a charge and some of them will join that charge. That charge of murder is coming Lt Col Kinnear. That charge is definitely underway.”

Modack and the arrested AGU member will appear on Tuesday, 4 May, in the Bishop Lavis Magistrate’s Court in connection with the failed hand grenade incident at Kinnear’s house and the alleged corrupt relationship between the office and Modack. Modack and his co-accused are due back in the Cape Town Magistrate’s Court on 7 May 2021. DM/MC