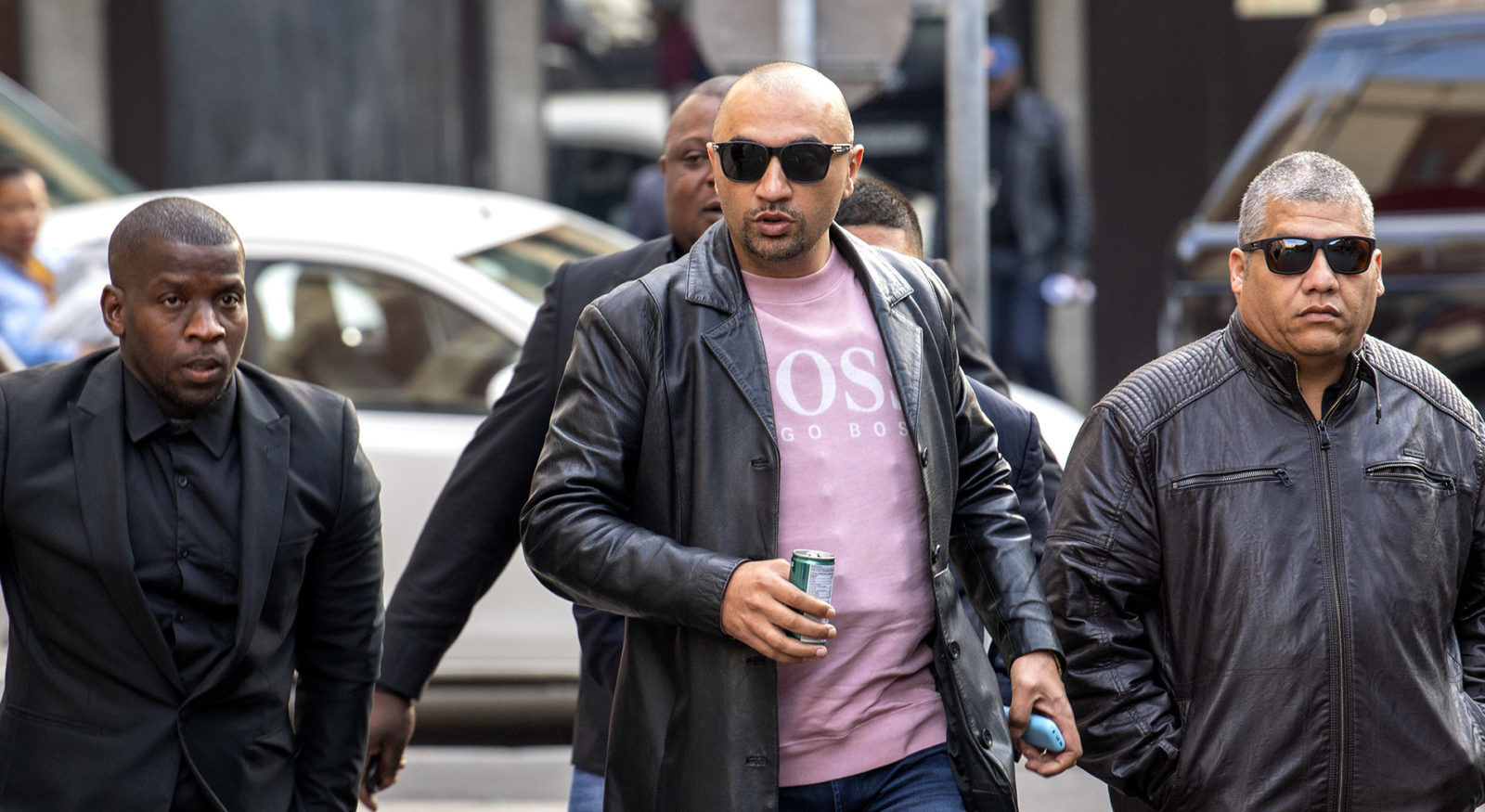 Nafiz Modack is flanked by his bodyguards outside the Cape Town Magistates’ Court in 2019. (Photo: Gallo Images / Netwerk24 / Jaco Marais)

Four suspects, including alleged crime boss Nafiz Modack, have been arrested in connection with the murder of Lieutenant-Colonel Charl Kinnear and the attempted murder of criminal lawyer William Booth.

Investigators on Thursday made a breakthrough in the murder case of Anti-Gang Unit section commander Lieutenant-Colonel Charl Kinnear and the attempted murder of criminal lawyer William Booth, arresting four suspects after a high-speed car chase in Cape Town.

The Directorate for Priority Crime Investigation (Hawks) confirmed that the National Task Team had apprehended the suspects, one of them the alleged crime boss Nafiz Modack, after they were cornered on Sable Road near Century City.

Hawks spokesperson Colonel Katlego Mogale said the four men, aged between 29 and 49, were arrested on charges relating to the attempted murder of Booth, the murder of Kinnear, and gang-related extortion, kidnapping and intimidation.

Mogale said members of the task team had noticed the suspects in Century View, but that they had sped off when approached. A car chase ensued and the suspects were cornered at Sable Road.

Police Minister Bheki Cele said: “This breakthrough must be congratulated, more so because we have always maintained that the murder of Lieutenant-Colonel Kinnear was no random act but a callous act that was part of a conspiracy which is being exposed by the work of police. We also expect more arrests to follow.”

The arrest of Modack and the three others comes a week after three members of the Terrible West Siders (TWS) gang, in a plea and sentencing agreement, admitted that the attempted murder of Booth on 9 April 2020 outside his home in Gardens, Cape Town had been ordered by their imprisoned leader.

These revelations were contained in the plea and sentencing agreement of the TWS trio Kauthar Brown, Ebrahim Deare and Riyaad Gesant at the Cape Town Magistrates’ Court on Friday, 23 March.

Prior to this, the Hawks investigation team had established the identity of “Mr X”, the man who allegedly requested murder accused Zane Kilian to track the phones of Kinnear and Booth.

Maverick Citizen was informed that the man was identified when the Hawks established that the person who made threatening calls to Hawks Captain Edward du Plessis on 19 January 2020, telling him that there was a R1-million “hit on his head”, had been employed by Mr X.

And during the bail application this month of Amaal Jantjies, Farez Smith and Janick Adonis in the Bellville Regional Court, WhatsApp messages between Jantjies and Modack were submitted as evidence.

Prosecutor Blaine Lazarus told the court that Modack had sent Jantjies a message on 14 November 2019 with the address of Kinnear and told her to give it to Adonis because he knew what to do with it.

The prosecution, in this case, contends that Modack ordered the hit on Kinnear.

Mr X also features prominently in the affidavits of Hawks investigators Captain Pieter Joubert and Captain Du Plessis during the bail application of murder accused Zane Kilian in connection with the murder of Kinnear and the attempted murder of Booth.

Du Plessis, in his affidavit, stated that Kilian pinged the phone of Booth at least 658 times from 6 March 2020 to 18 September 2020. On the day of the failed murder attempt on Booth, Kilian pinged Booth’s phone from 3.35am until 7.45am. The murder attempt was carried out at 7.10am.

In the assassination of Kinnear, the affidavits indicate that Kilian was asked by Mr X to ping Kinnear’s phone. Until 18 September 2020, when Kinnear was killed, Kilian had pinged his phone 2,408 times.

The four will appear on Monday, 3 May in the Cape Town Magistrates’ Court on charges of conspiracy to commit murder, attempted murder, extortion and kidnapping. DM/MC