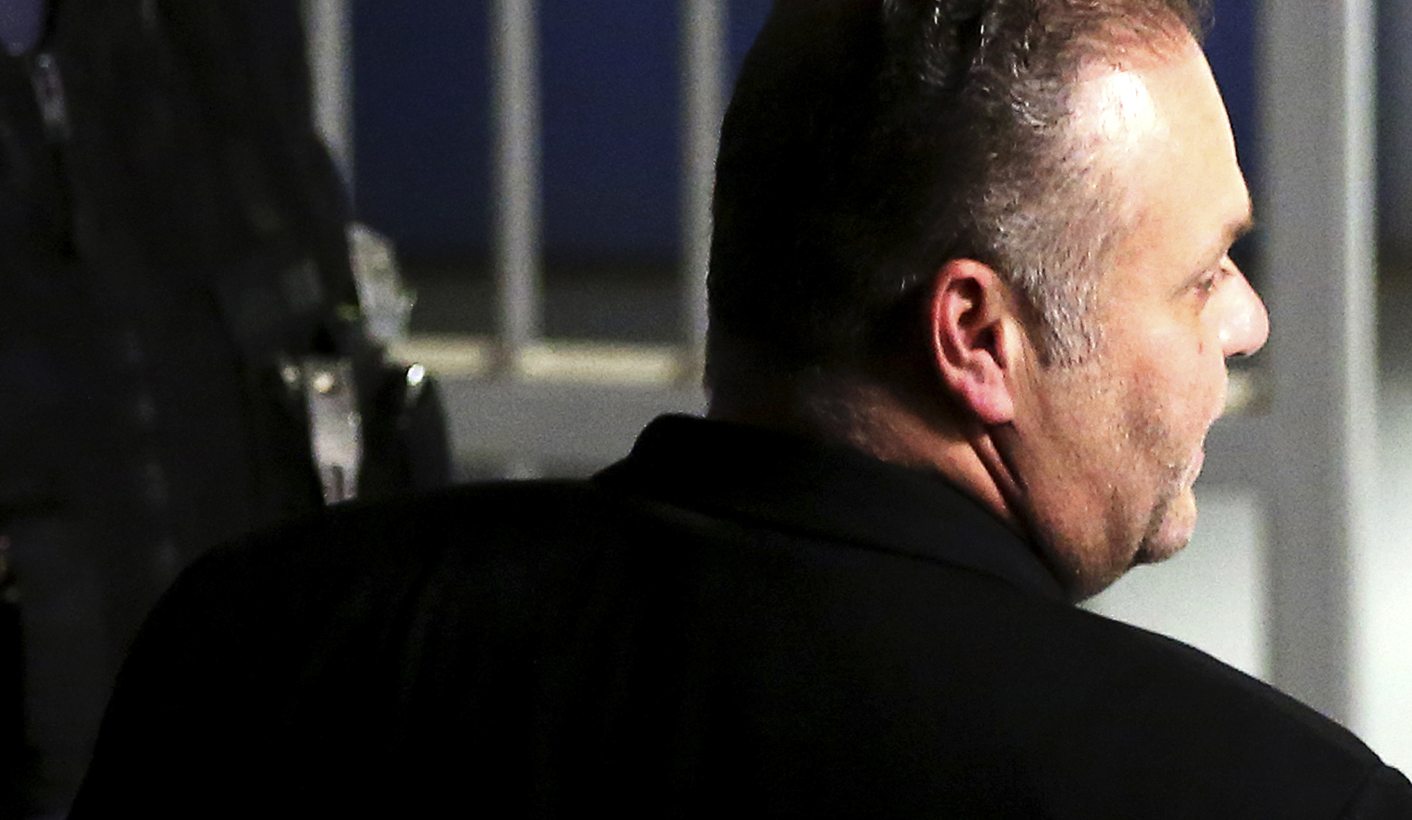 In the ten years that he made South Africa his home, Czech criminal Radovan Krejcir lived a charmed life of fast cars and easy money while at least eight bodies piled up around him. Krejcir seemed untouchable as he corrupted everyone in his orbit including low- and high-ranking police officials, three of whom sat with him in the dock of the South Gauteng High Court yesterday. One man who will be celebrating Krejcir's 35-year prison sentence is forensic investigator Paul O’Sullivan who flew across the world compiling a thick docket of affidavits and evidence of Krejcir's criminal dealings. By MARIANNE THAMM.

There is a neat symmetry to the fact that the judge who finally managed to secure the long-term incarceration of “fugitive” underworld kingpin Radovan Krejcir lives in the same upmarket East Rand suburb of Bedfordview as the Czech felon.

The suburb was also home to murdered Teazers boss Lolly Jackson, another of Krejcir’s “associates” who owned two houses in the area. The Harbour restaurant in the Bedford Centre was effectively Krejcir’s office, and the Czech’s Moneypoint gold and diamond pawn shop and money lending racket squatted on the corner of Bradford and Nicol Roads.

Krejcir dramatically survived an apparent assassination attempt outside Moneypoint in July 2013 when a car with remote-controlled shot gun barrels concealed behind a number plate were triggered one afternoon, peppering Krejcir’s bullet proof-car with buckshot.

Three months later drug trafficker Sam Issa, a fugitive from French law who was also linked to Krejcir, was murdered in a drive-by shooting on the corner of Bedford and Smith Streets in 2013 causing a massive mid-afternoon traffic jam.

What one would give to read posts on the Bedfordview neighbourhood crime watch Whatsapp group.

But on Tuesday, after a late-afternoon bomb threat on Monday and earlier attempts by Krejcir, accused number one, to filibuster sentencing proceedings in the South Gauteng High Court, he was finally sentenced to an effective 35 years behind bars on charges relating to drug dealing, kidnapping and attempted murder.

His five co-accused, including former Hawks cops Samuel Modise Maropeng, Jan Lefu Mofokeng and Siboniso Miya, and another accused Desai Luphondo, were all sentenced to 15 years each for the attempted murder of Bheki Lukhele.

On Monday, while listing reasons why Judge Colin Lamont should recuse himself – including that the judge was part of “a conspiracy against me and my family,” – a manacled Krejcir slipped in a final threat: “I believe you stay in Bedfordview,” he told the judge.

Decoded: I know where you live.

An especially sinister threat considering that a European hitman allegedly hired by Krejcir to bump off Judge Lamont had tried to visit Krejcir at the Kokstad C-Max prison in December.

“How do you know that?” asked the long-suffering Judge Lamont, who wore an expression of barely concealed irritation throughout the pre-sentencing court delays.

“I read it in the papers,” replied Krejcir.

In 2014 Judge Lamont was given extra security when his windscreen shattered after a loud “bang” as he was driving home, so everyone in court this week was reading between the lines.

“Yes I know a chip supposedly shattered my windscreen,” a rubicund Lamont quipped to Krejcir this week.

Perhaps residents in Bedfordview will sleep less disturbed in the knowledge that Krejcir is finally behind bars. But “Mr Teflon” has managed, many times, to escape the coils of justice, so you never know.

While the ten-year drama that has unfolded around Radovan Krejcir often reads like a Hollywood b-grade thriller, the reality is that he successfully managed, in a remarkably short period of time, to corrupt a wide and complex network of South Africans including policemen and government officials. Krejcir was, as veteran investigative journalist Sam Sole once wrote, a threat to the country’s stability and democracy, yet he was seemingly allowed to get away with it as paralysed authorities watched from the sidelines.

In what must rank as the ultimate stroke of fantastic luck Krejcir, after his arrest at OR Tambo Airport for arriving on a false passport in 2007, shared a cell at the Kempton Park police station with Cypriot George Louka (alias Smith) who was closely linked to tax evader, money launderer and strip-club owner Lolly Jackson.

Louka had even ordered a Surf and Turf meal and caviar from the nearby Emperors Palace Casino, and that was delivered to the two men while they languished in police cells. Krejcir’s was a smooth entry to South Africa lubricated by Louka.

Oddly a South African magistrate refused to grant an extradition order even though Krejcir had been arrested after being flagged by Interpol as someone who was on the Czech government’s “most wanted” list. Instead, Krejcir was granted R1 million bail and released into the world where he soon established himself in the criminal underworld with the help of Jackson and Louka.

A terminally ill Louka, who was extradited to South Africa to testify against Krejcir in April last year, finally spilled the beans. He told the court that it was Krejcir who had shot and killed Lolly Jackson in 201o after an argument about money.

In 2012 Krejcir was sentenced in absentia in a Prague court to 11 years in jail on a charges of money laundering, and in relation to three charges in the Czech Republic outstanding since 2006.

Despite this South African authorities, specifically the National Prosecuting Authority and Home Affairs, failed to act and extradite Krejcir or prosecute him for crimes committed in South Africa because of “a lack of evidence”.

The fact that Krejcir has finally been convicted and sentenced to a long jail term in South Africa is almost all due to forensic investigator Paul O’Sullivan’s efforts to expose the Czech’s criminal activities.

Since initiating his investigation into Krejcir in 2009, O’Sullivan compiled an over 80-page dossier on the gangster’s activities. He handed between 12 and 15 damning sworn statements to police from a range of individuals implicating Radovan Krejcir in a string of serious crimes including money laundering, smuggling drugs, smuggling contraband cigarettes and more. Meanwhile, at least 16 bodies have piled up around Krejcir in South Africa and the Czech Republic.

It was O’Sullivan who submitted an extensive and detailed affidavit – with attached sworn statements of the various crimes linked to Krejcir, including the murder of former Apartheid police operative turned “private investigator” Kevin Trytsman, Jackson, and German luxury car convertor, Uwe Gemballa – to the refugee appeals tribunal in 2011 requesting the Czech not be granted asylum in South Africa.

“I do not believe our system is perverted. I have faith in South Africa and its government, its people and this honourable tribunal. I do not believe Krejcir’s claim that he has paid all the right people in the right places to ensure he gets to stay in South Africa. I have faith that you will do the right thing and send this gangster back to the Seychelles, where he belongs, or any country that will take him,” O’Sullivan wrote to the tribunal.

Without O’Sullivan’s affidavits and submission Krejcir’s bid to gain political asylum might have succeeded. At the time Krejcir claimed he had been a victim of a “political plot” in his home country.

But within a few years Krejcir managed ruthlessly to infiltrate and destabilise established crime networks while police appeared to look on helplessly, at times appearing to aid and abet him.

O’Sullivan has always maintained that the question is not how many cops were on Krejcir’s payroll but how high up the corruption went. O’Sullivan is currently investigating those officers whom he says have been influenced or bought by Krejcir.

While Krejcir has intimated that he intends to appeal against the sentence there are several of his former enablers, some who are still in the SAPS, who might be sweating a tad in what will surely follow in the aftermath of Krejcir’s sentencing.

Asked by the Daily Maverick whether he was celebrating the sentence, O’Sullivan, who featured on a hit list found during a raid on Krejcir’s house, replied: “I’m too busy working to expose the rotten Generals who helped him.” DM

Photo: Radovan Krejcir, a Czech fugitive and businessman is led to the holding cells during his court appearance on charges of kidnapping and attempted murder at the Palm Ridge court, east of Johannesburg December 2, 2013. REUTERS/Siphiwe Sibeko