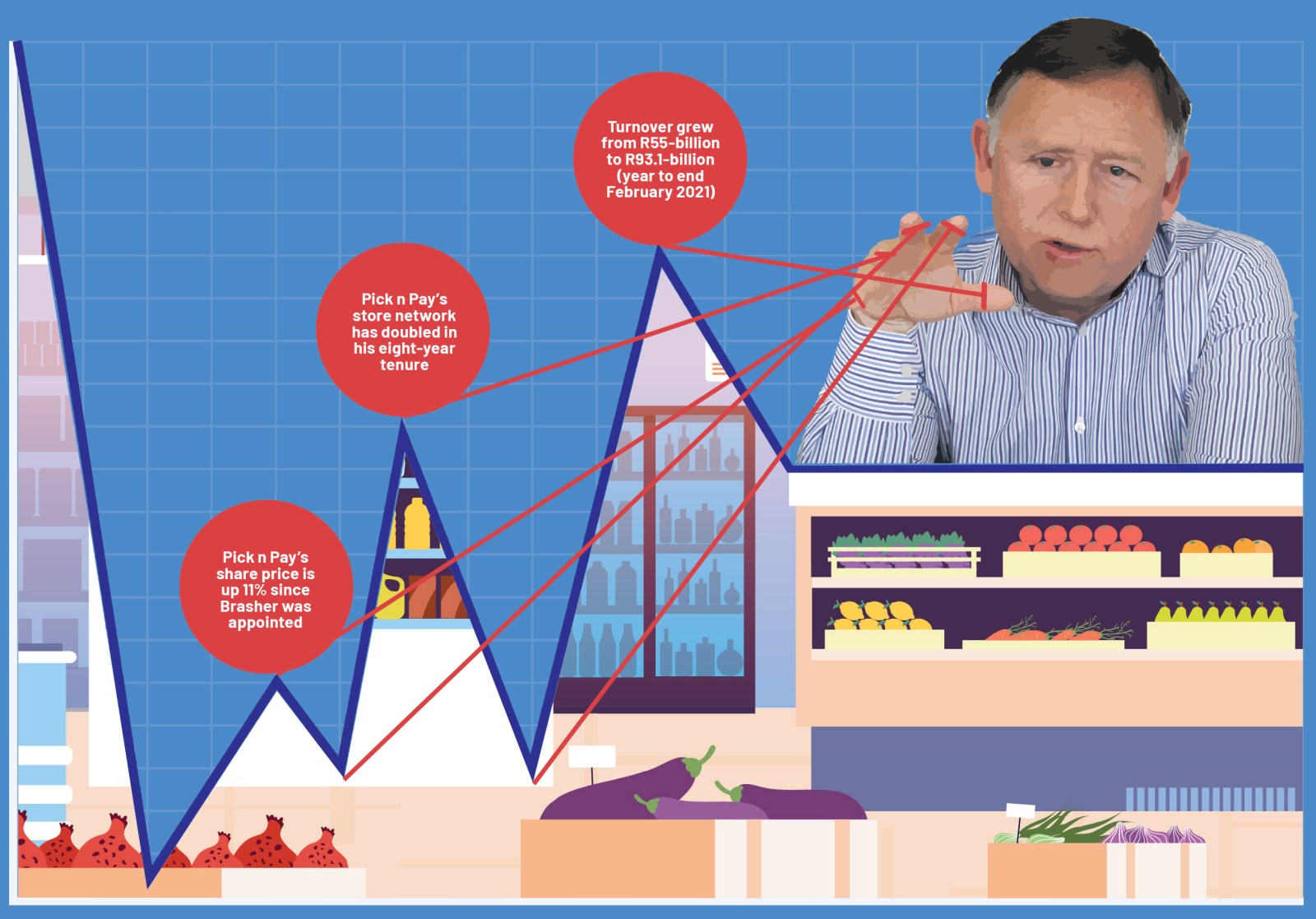 Having saved the retailer, Richard Brasher plans to stay in SA – and stay in retail. Many companies could do with the advice of the man who pushed the chain’s share price up 11% during his tenure.

Richard Brasher, the outgoing Pick n Pay CEO of eight years, is adamant that his retirement from the retailer at the end of April won’t push him to embrace a slow life of playing golf or sailing around the world on a boat.

“‘Retirement’ is a comfortable word for some people,” Brasher told DM168. “But I cannot imagine retiring in the traditional sense of the word. And besides, I’m not good at golf or building boats to sail them.”

In the offing for the 58-year-old Englishman is some time taking it easy and not anticipating work days of more than 14 hours. Brasher wants to take a few weeks off from May to spend time with his wife and their university-going son.

He plans to stay in SA and explore job opportunities in the retail industry. “There is a lot to like about SA; it is a good base for me to plan on what I want to do next. I won’t be taking up another CEO role, but I will probably stay involved in retail in some sort of advisory capacity.”

Arguably, Brasher will be readily asked for help by struggling retail companies, considering his track record of putting Pick n Pay on the path of stability and profitability – saving the once leading retailer from decline.

Brasher gets the job done

For the Ackerman family, Pick n Pay’s founder and controlling shareholder, appointing Brasher to the top job in February 2013 was a big gamble. The family preferred appointing insiders who rose through the Pick n Pay ranks, such as Sean Summers, Nick Badminton, and Richard van Rensburg. Brasher was an outsider in every sense of the word; he is British and had led Tesco, the UK’s biggest food retailer, before joining Pick n Pay.

The Ackermans’ bet on Brasher has paid off. “Pick n Pay has transformed. Our stores are looking more modern and now perform efficiently. But there is still plenty more to be done, including accelerating our digital transformation and online shopping platforms for the new Covid-19 world.”

Brasher said although Pick n Pay has reached stage three of its recovery phase – the retailer is now positioned for sustainable long-term growth – there is still a lot of work to do in attracting a wider pool of customers into its 1,994 Pick n Pay and Boxer-branded stores.

Pick n Pay wants to attract more of the low-to-middle-income consumers who comprise the vast majority of SA consumers. Africa’s biggest grocer, Shoprite, has largely cornered that market. “A 1% growth in our market share in that market is worth R5-billion [in terms of potential sales for Pick n Pay]. The same percentage growth in the high-income consumer market is worth about R1.6-billion,” said Brasher.

Pick n Pay might buy its way into the low- to middle-income consumer market – Massmart’s discount chains, Rhino Cash & Carry, and Cambridge stores are up for sale. “I’ve expressed an interest in buying the Massmart chains,” said Brasher, adding that Rhino and Cambridge stores would help Pick n Pay to compete with Shoprite.

All the Pick n Pay growth plans laid out by Brasher will have to be executed by his successor, Pieter Boone, a Netherlands-born businessman and former COO of Metro AG, a German-based multinational food and hospitality business. Boone, too, is a Pick n Pay outsider.

“Before Brasher joined Pick n Pay, the company was struggling relative to its peers. It is now remarkably transformed and in a much-improved position – operationally and financially,” said Ron Klipin, a senior portfolio manager of Cratos Wealth.

Before Brasher’s appointment, Pick n Pay had implemented many failed turnaround plans, dating back to Nelson Mandela’s presidency. At some point, it was feared that Pick n Pay could go the way of OK Bazaars, once a leading retailer, which was bought by Shoprite for R1 in 1997.

Brasher came in and launched a recovery plan that involved opening more Pick n Pay stores and sprucing up ageing stores, cutting costs in several areas, such as doing away with advisers and turnaround specialists, investing in promotions and discounts, improving on-shelf availability, investing in centralised warehouses and making the supply chain slicker.

Brasher’s recovery plan has largely worked. Pick n Pay’s share price is up 11% since he was appointed in February 2013, outpacing Shoprite (down 19% over the same period), Woolworths (down 20%), and Massmart (down 71%). Pick n Pay’s store network doubled during his eight-year tenure. Turnover grew from R55-billion to R93.1-billion (year to end-February 2021).

But Brasher didn’t meet his turnover target. “I planned to leave when I’d broken through the R100-billion mark, but I didn’t make that,” he said. Pick n Pay’s profit margin — a key metric for measuring profitability in retail – is 2.1%, still far from the peak of 4.5% when Raymond Ackerman, the founder, managed the retailer more than 20 years ago. Shoprite still has an industry-leading margin of 5.3%. DM168