By Nompendulo Ngubane for GroundUp• 23 April 2021 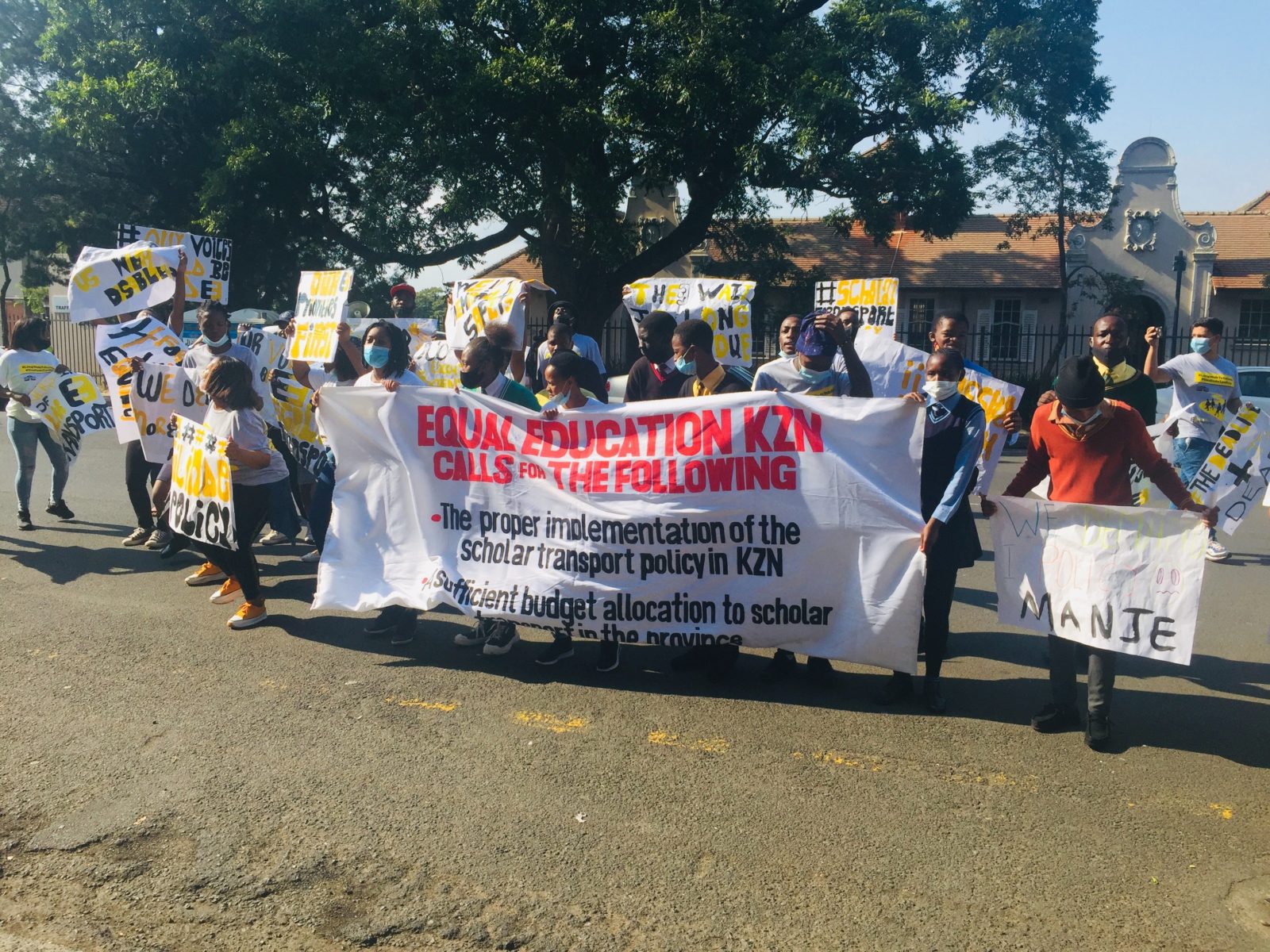 About 50 learners and Equal Education members picketed outside the Department of Education’s offices in Pietermaritzburg on Thursday, demanding that the final provincial Learner Transport Policy document be released. (Photo: Nompendulo Ngubane)

Protesters quiz why release of document has taken so long, insisting rural learners are suffering without school transit.

About 50 Equal Education (EE) supporters picketed outside the Department of Education’s offices in Pietermaritzburg on Thursday. They are demanding that the final provincial Learner Transport Policy document be released.

Learners from schools in Nquthu walked from the Market Square to the department’s offices in Burger Street while chanting songs and carrying placards.

According to a statement on Thursday, in 2019, EE and the Equal Education Law Centre (EELC) received an order from the Pietermaritzburg high court, to get the provincial department to release the draft transport policy by 30 January 2020. “After several delays, the draft policy was finally published for public comment in April 2020.”

The statement said after the release, EE and EELC made a joint submission to the department where they “pointed out many serious shortcomings in the draft policy”.

EE junior organiser, Tebogo Tsesane, said they want to put pressure on the department to release the final policy because learners, especially in rural areas, are still struggling with transport.

“The department is delaying and not prioritising the needs of the constituency which are the learners of KZN. Learners still travel more than three kilometres to go to school. Walking long distances exposes them to dangers. When the weather is bad they get sick because they have to cross rivers to go to school,” said Tsesane.

He said the draft policy published in April did not include timeframes and how the department planned to cater for all learners in need of transport. “It was the wrong policy … It also didn’t state how scholar transport will be funded,” said Tsesane.

Learner Alwande Msimango, from Nhlalakahle Secondary School, explained the difficulty getting to school in Ndindindi. There is one bus that has to make many stops to pick up learners at different locations. This means some have to be at their bus stops by 5am.

“In winter it’s dangerous because it’s dark. Sometimes when the bus has mechanical problems, we have to walk to school and by the time we arrive, some of us are tired already. It’s difficult to concentrate in class after a long walk,” said Msimango.

The department’s deputy director-general Bheki Masuku accepted a memorandum from the group and promised to respond in 21 days. DM