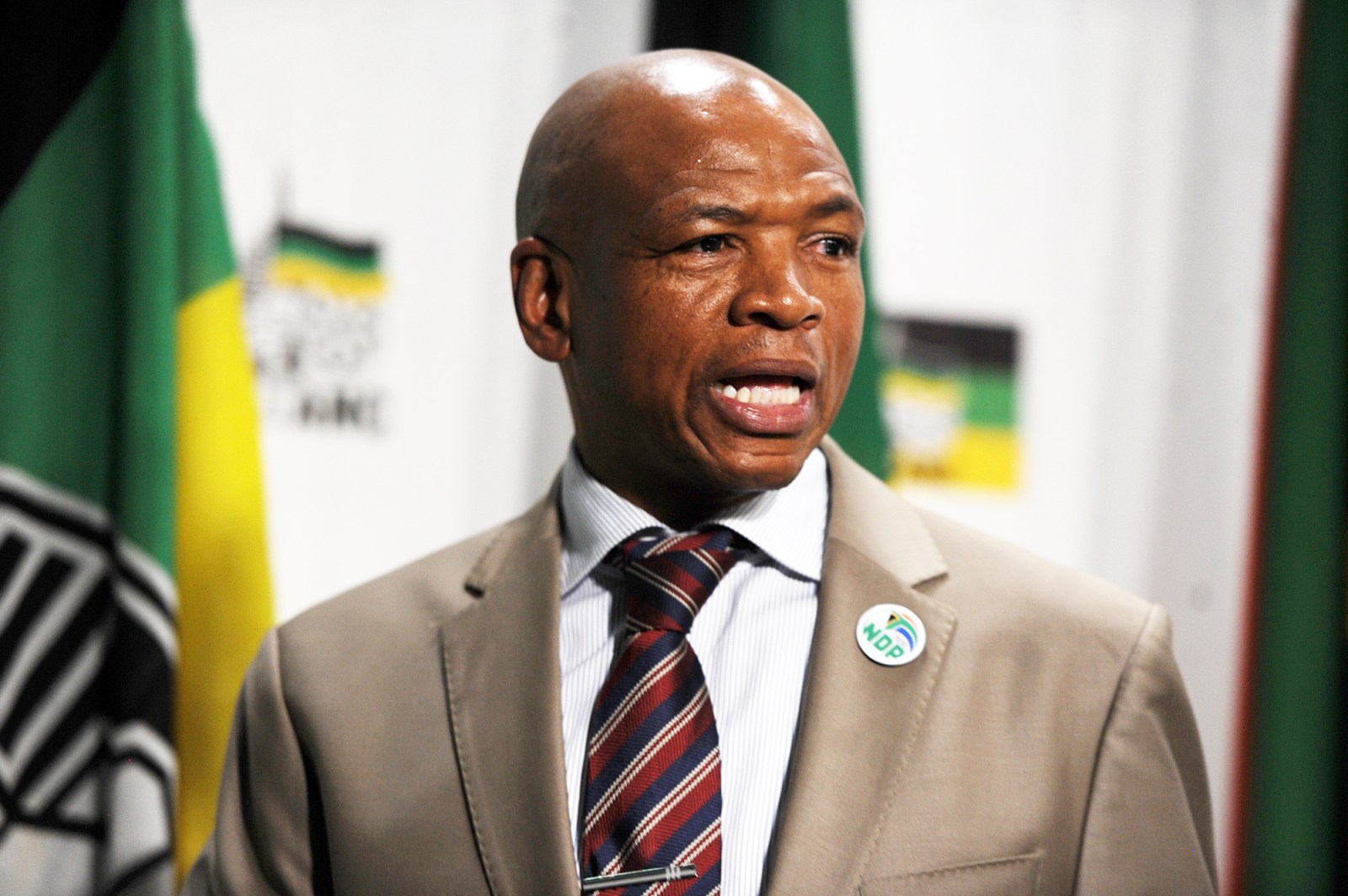 Former North West premier Supra Mahumapelo during a media briefing to announce his resignation at Luthuli House on May 23, 2018 in Johannesburg, South Africa. Mahumapelo announced that he is taking "early retirement" as premier of the North West. (Photo by Gallo Images / Daily Sun / Jabu Kumalo)

Supra Mahumapelo has had his ANC membership temporarily suspended by the party’s interim provincial committee in the North West. It’s a move that can be seen as a test of the strength of the ANC’s Radical Economic Transformation (RET) faction.

When former president Jacob Zuma returned to South Africa last February after medical treatment in Cuba, Supra Mahumapelo was at the airport to welcome him.

To everyone who had an “issue” with Zuma, Mahumapelo had a message: “You touch Zuma, you touch us”.

But if you touch Mahumapelo – what happens next?

Mahumapelo has made no secret of his alliances within the Radical Economic Transformation (RET) faction of the ANC. The news that Mahumapelo’s ANC membership is to be suspended will serve as an acid test for the RET forces and their ability to mobilise when threatened.

The former North West Premier stands accused of encouraging a fraud-accused Northern Cape mayor not to step aside from his role, in contravention of the ANC resolution dealing with this issue.

JB Marks Municipality mayor Kgotso Khumalo was arrested by the Hawks in October 2020 and charged alongside a municipal manager for the alleged theft of R5-million from the municipality. Khumalo has thus far declined to stand aside and is causing the ANC further headaches due to the decision of party councillors to reject a DA motion of no confidence in him.

Mahumapelo allegedly addressed a gathering at Sarafina Hall in the JB Marks region on March 22 at which he “informed comrade Kgotso Khumalo not to resign as the executive mayor of JB Marks local municipality”, according to a letter sent to him by interim provincial committee coordinator Hlomani Chauke.

A video of Mahumapelo subsequently circulated on social media showing his address to the hall. Chauke further accused Mahumapelo of failing to respond to a letter asking him to explain the video.

Mahumapelo will be suspended while disciplinary proceedings against him are undertaken. He will be charged with bringing the party into disrepute and undermining the functioning of the ANC.

This is just the latest allegation to be brought against Mahumapelo within the province. Following his 2018 axing as the ANC’s leader in the North West, he has repeatedly been accused of sowing divisions and fomenting factionalism within the party – and reportedly continues to wield influence.

Indeed, the former premier is already accused of having organised a parallel rally to an official ANC gathering in the North West aimed at drumming up support before by-elections in December 2020. He allegedly did so alongside the acting provincial ANC Women’s League secretary Bitsa Lekonpane.

Such actions undermine the unity of the party in the North West, says the interim provincial committee – which has now finally pulled the trigger on Mahumapelo’s suspension. SABC News reported that Mahumapelo was scheduled to appear before the provincial disciplinary committee, apparently on the charges related to the parallel rally, on Thursday. He was a no-show at the first scheduled disciplinary hearing for this matter in February.

Already, familiar voices have spoken out in support of him. Unofficial RET spokesperson Carl Niehaus previously told News24 that Mahumapelo was being politically targeted with “trumped-up disciplinary charges”.

Another vocal supporter in the past has been ANC secretary-general Ace Magashule, who was reported in November 2020 as saying that there could be no ANC in the North West without Mahumapelo.

“We can’t fix anything in North West without comrade Supra being there,” Magashule was reported as telling supporters.

“Whether you like him or not, it’s ok. Hold on Mahumapelo, hold on.”

Another figure lodged firmly in the Supra camp is North West Premier Job Mokgoro, who has been accused of making Cabinet appointments in the province to please Mahumapelo.

“Seemingly pulling the strings behind the scenes is Mahumapelo, the man Magashule dubbed the alpha and omega of the ANC in the North West,” wrote Setumo Stone for City Press in November 2020.

Adding to the political mess in the province is the fact that Mokgoro’s ANC membership has also been suspended since February after he and four others voted alongside the opposition in a poll regarding a secret ballot in the North West Legislature. Mokgoro has, however, remained in place as North West Premier – making something of a mockery of the suspension decision, but certainly placing his political future in jeopardy.

On the note of multiple roles: Mahumapelo is also an MP in the National Assembly and the chairperson of Parliament’s tourism committee, raising the question of what will happen to those positions.

With both Mokgoro and Mahumapelo’s ANC membership suspended, the ANC’s interim provincial committee can be seen as attempting to clip the wings of the RET gang ahead of the provincial elective conference in June.

What it will really test, however, is the level of grassroots support for RET figures like Mahumapelo – who often claim that their real following is on the ground. Mahumapelo’s supporters were expected to gather outside the ANC provincial offices in Mahikeng on Thursday, and there will be many curious eyes to see the size of the crowd he can attract.

With Zuma currently in legal limbo, Magashule on the back foot and Mahumapelo suspended, the RET forces will have to make significant moves soon – or be finally cast into the shadows. DM