The rallying rand: Next stop, R14 to the dollar?

The rallying rand: Next stop, R14 to the dollar? 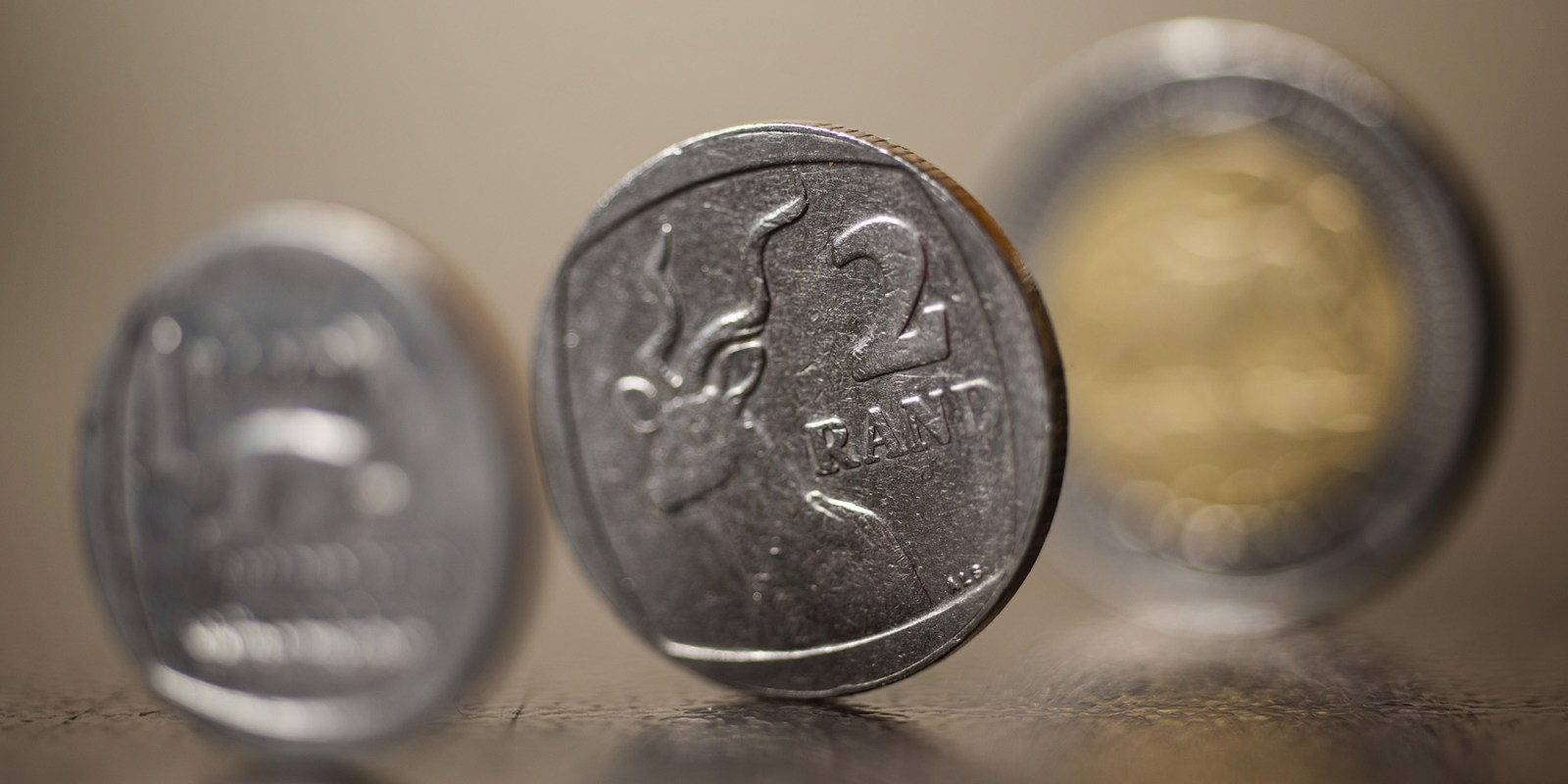 The rand has surprised over the past few weeks by outpacing its emerging market counterparts and coming in as the currency that has appreciated most this year. But are there sufficient tailwinds to carry it through R14 to the dollar and what will it take?

The rand has decisively turned around its fortunes in the past few weeks to bear down on the crucial R14 to the dollar, already having gained a third of its value since reaching R19 to the dollar a year ago and 8.4% since early March.

Admittedly most of the tailwinds have come from global factors, primarily the turnaround in the world’s benchmark 10-year US Treasury yield and renewed broad-based weakness in the dollar.

Concerns about a potential taper tantrum saw the US Treasury yield peak at 1.75% at the end of March and it has since retreated 17 basis points to 1.5680% – a material move given the historically low level of US yields. A lower yield has encouraged more risk-taking by investors and has also added to the carry trade credentials of emerging markets, given the yield premiums relative to developed markets that they continue to offer.

The emerging market currencies that started off the year ahead of the pack, Turkey and Brazil, are now far lower down the ranking. The Turkish Lira (in 14th position) was leading by a wide margin in the first quarter but has been profoundly undermined by the country’s political instability and the worrisome ousting of the third central bank governor.

Meanwhile, the Brazilian Real has been decimated by the devastating, and still uncontrollable, Covid-19 rate of infections and deaths in Brazil, with the currency now in the last place and generating carry returns of -6.5% over the past year. 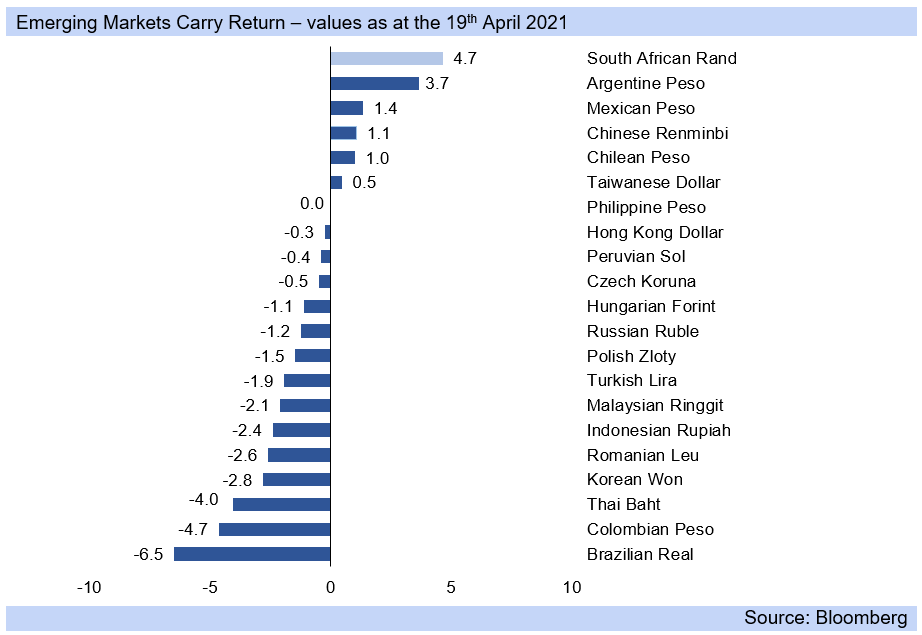 The rand took a breather on Tuesday after gaining ground consistently over the previous week, remaining around R14.30. However, the burning question in currency markets is whether it will continue to appreciate past the R14 to the dollar level.

It seems economists believe that the prevailing conditions wouldn’t be sufficient to get it there in the near future – and that it would take a significantly positive local or global development to propel the currency through that key level.

Arthur Kamp, Sanlam Investments chief economist, attributes the strong appreciation in the currency predominantly to the positive influence of the terms of trade, saying: “We haven’t had trade balance surpluses like this for a long time.”

Other contributing factors are the buoyancy of the global economy and the US fiscal expansion. In South Africa, positive surprises on revenue collections and better news in the Budget have contributed to the rand’s gains too.

He believes the currency is fairly valued at its current level after clawing its way back from its undervalued level last year, and notes that it is difficult to take a strong call either way on where the rand is likely to be headed next.

There would need to be a “new development”, he says, for the rand to strengthen to R14. “The rand has been buoyed by more confidence on the economic recovery but it still needs to become established. Credit extension is still weak. We need some lift in that.”

Old Mutual Multi Managers investment strategy Izak Odendaal says a move to below R14 a dollar is “entirely possible” but he also believes it would need “some new piece of good news”. If it got there, however, he warns it would start looking expensive.

Odendaal points out that the recent gains caught many off-guard and were largely a result of the trade-weighted dollar weakening since the start of the month after a surprisingly strong run in the first quarter, as shown in the graph below. 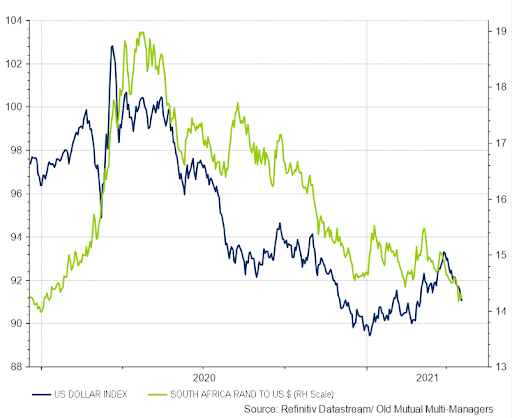 He says that the good news would need to be evidence of strong growth without inflationary pressures or more balanced growth, with more than just the US growing globally. An unbalanced global recovery could put further upward pressure on the dollar to the detriment of emerging market currencies. Locally, he says, it would take something big politically – or further gains in the price of platinum group metals and iron ore.

Investec economist Annabel Bishop says although SA is showing some progress in structural reform, these are not sufficient to explain the domestic currency’s recent marked strength. It has been the currency’s strong carry trade return that has been a key support, she believes.

Bishop is not expecting the rand to strengthen beyond the R14 level and, instead, expects the rand to average R14.50 a dollar during April. Beyond that, the domestic currency faces the risks of materially higher inflation and credit rating downgrades, which would see the currency sell-off.

“While the rating agencies may choose not to downgrade SA in May, the risk remains.”

On the global front, she says the traditional sell-in-May-and-go-away investor behaviour, which usually sees a reduction in demand for riskier assets during the northern hemisphere summer holidays, could be less prevalent this year, with Covid keeping many investors at home.

So it is likely to be a stretch, but certainly not impossible, for the rand to break through the R14/$ level in the weeks ahead. A combination of locally and globally positive developments would need to materialise for it to do so.

These could be the US 10-year Treasury yields falling further and the dollar weakening, improving the attractiveness of South Africa’s carry trade credentials. All bets would be off, though, if there was a resurgence in risk-off sentiment driven by fears of another taper tantrum.

Any news that shows South Africa has made progress towards entrenching the domestic economic recovery would provide the tailwinds needed, as would continued commodity price increases and favourable trade data. Good news on the Covid-19 vaccine front would provide further impetus to the currency’s appreciation.

Should the rand make it through that critical psychological level, however, it could well become overvalued and vulnerable to any turnaround in global risk appetite, which, as we have seen this year, is quite possible.

The rand has a history of surprising the market with sudden, and steep, sell-offs. So it may be a case of “be careful what you wish for” when viewing the R14 level as the next stop for the currency. DM/BM