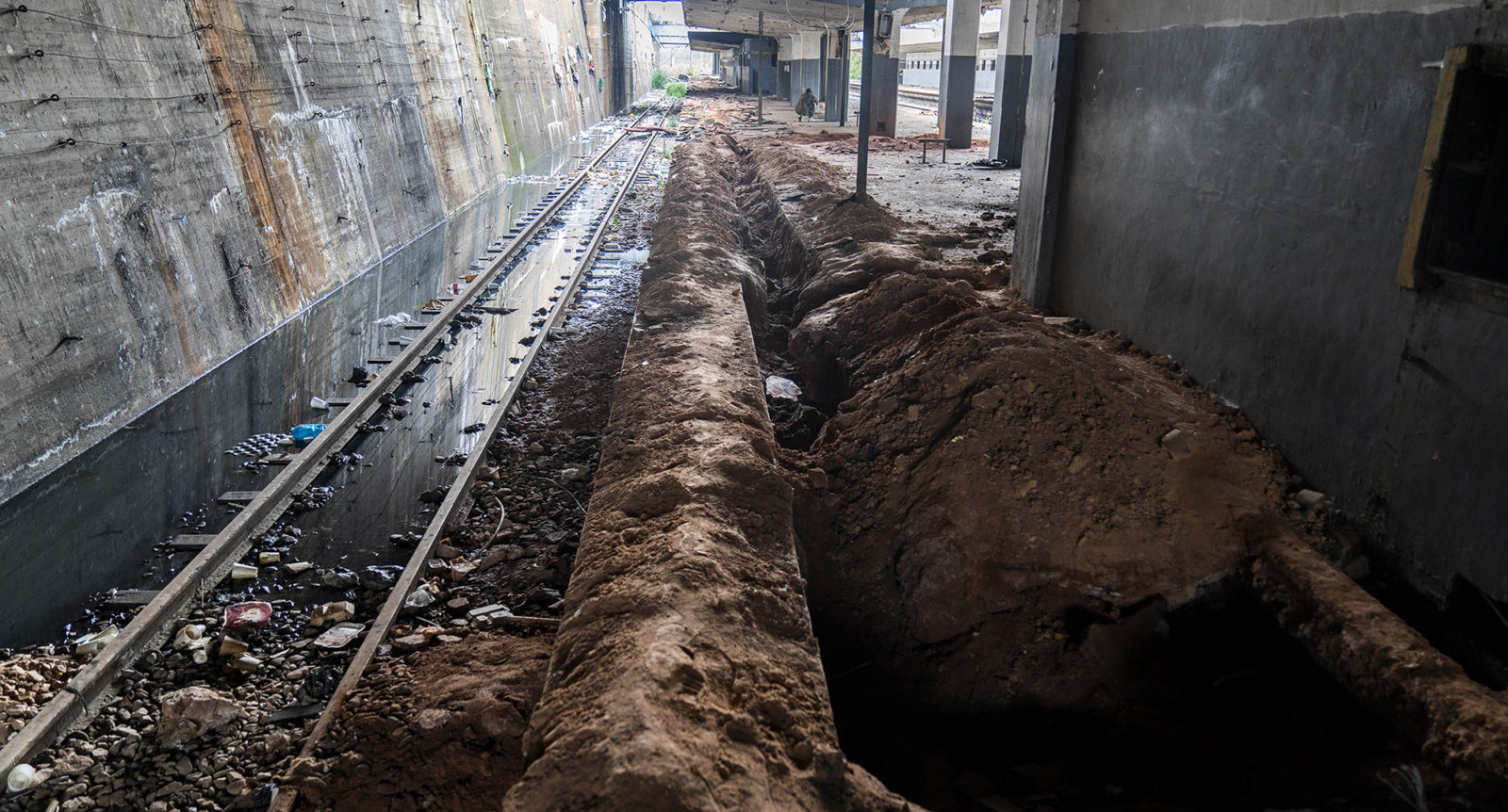 We are now at the point where most of South Africa’s railway network is likely to be written off and closed. Full or partial privatisation is the only way to save the railways.

We are standing on one of Johannesburg’s old yellow mine dumps, looking south. In the middle distance is the magnificent FNB Stadium that will host the Fifa World Cup final. In the foreground is an elegantly arched concrete bridge carrying the shining rails, masts and overhead cables of the new 14km rail link between central Johannesburg and Nasrec. After 18 months of construction at a cost of R70-million (2020 value: R115-million), the new line is ready to ferry more than 20,000 peak-hour passengers.

The Nasrec station is closed. The steel of the rails is rusting; the overhead electrical equipment has vanished, apart from a few lengths of cable drooping uselessly from the masts; and the pillars of the concrete bridge are covered with graffiti and piled with litter. Many other stations have been wrecked by vandals and thieves.

The broken and deserted Nasrec rail link is an emblem of what has happened to the South African railway network — once regarded as one of the world’s best. And its destruction has little to do with the Covid lockdown. Transport Minister Fikile Mbalula admitted in January 2020 that Prasa “has suffered blows from many years of mismanagement and deteriorating corporate governance. Today it is a broken organisation.”

In January 2020, before the lockdown was even thought of, Prasa announced it was experiencing “unprecedented levels of vandalism and theft across all the regional Metrorail [commuter] and Shosholoza Meyl [intercity] services, resulting in massive disruption to commuter services, with vast sections being closed down”.

Goods trains, the responsibility of Transnet Freight Rail (TFR), did not escape the effects of rampant crime. In March 2020, also before the lockdown, Transnet reported that it was cancelling about 170 goods trains a month because of a spike in 2019 in the theft of overhead cables.

Lloyd Tobias, acting CEO of TFR, confirmed what every stakeholder has known for years: “It is clear that organised crime syndicates are engaged in cable theft.” In some places, the rails themselves have been lifted and stolen for scrap. The overall damage will cost billions of rands to repair.

A year on, in January 2021, the national rail network is no longer on its knees: it is out for the count. In mid-September 2020, more than 6km of cable was stolen in just 24 hours.

The International Rail Journal reported in September 2020 that “hundreds of kilometres of overhead cables, signalling wires and catenary masts have been stolen, affecting every Metrorail route in Gauteng. On the once-busy 35km mainline between Johannesburg and the western mining town of Randfontein, around 60km of cable was stolen during the lockdown alone. No commuter trains are running on this line, while the handful of Transnet-operated freight trains still running are often caught in cables left dangling by the thieves.”

These statistics are merely the symptoms of chronic and possibly fatal decay. However, contrary to some perceptions, our railway decline started long before the ANC took over government in 1994.

Until the 1970s, nearly all goods traffic went by rail. As the economy grew, however, so did competition from road transport. The railways had enjoyed legal protection, but by 1977, government policy finally switched to being road-friendly. After more than six decades as a protected national carrier, rail now faced unrestricted road competition for passengers and goods.

In 1981, the SAR & H (South African Railways and Harbours) was renamed the SA Transport Services (Sats). Consultants were brought in and applied the business jargon fashionable at the time — “business units”, “goal-orientated management”, “core business”, “profit centres” — and succeeding mainly in disrupting without creating anything new or finding solutions.

In April 1990, after 80 years of direct government and parliamentary control of the railways, Sats became a limited liability company under the name of Transnet Limited. The National Party administrations of PW Botha and FW de Klerk were in favour of privatisation of major state-owned entities, an approach that was broadly adopted by the first ANC administration under Nelson Mandela. But the push to privatisation in the 1990s was later abandoned by the ANC under President Thabo Mbeki.

Meanwhile, the main change at Transnet from the old SAR & H/Sats structure was that all suburban train services now fell under a new SA Rail Commuter Corporation (SARCC). Later the SARCC was renamed Passenger Rail Agency of South Africa (Prasa), with long-distance passenger trains added to its responsibility, and the goods operation was placed under Transnet Freight Rail (TFR).

It was a great mistake to separate goods trains from passenger traffic, which mostly used the same tracks. This created major operational, safety and accountability problems that had not existed before. To make matters worse, Prasa reports to the minister of transport, who is responsible for national transport policy, but Transnet falls under the Department of Public Enterprises.

South Africa has about 750,000km of roads and streets, the 10th biggest network in the world. About 158,000km of roads are tarred. Only a few important intercity national roads are in excellent condition because they are maintained by toll revenue.

As early as 1997, the Council for Scientific and Industrial Research warned that “the trend in maintenance expenditure on national roads has been one of steady decline since the late 1980s. Since then, the number of commercial vehicles on South African roads has increased by between 5% and 10% per year.” This analysis could be applied unchanged in 2021, more than 20 years later — but with road conditions now much worse.

What is to be done? The government must accept in principle that full or partial privatisation is the only way to save the railways.

The main cause of rapid road deterioration over the past 30 years has been the constantly rising volume of vehicles on the same roads. Overloading has been a problem ever since deregulation of road freight began in the 1970s — yet little has been done in 40 years to stop it.

Against the backdrop of operational, managerial and financial decline, the railways became progressively more unsafe and unsecured. This was a 35-year process that culminated in the unchecked theft and sabotage during the 2020 lockdown.

To understand this, we need to go back to the 1980s, when an effective railway policing system was simply abolished. In October 1986, the 16,500 members of the Railways Police were amalgamated with the South African Police to beef them up as the apartheid state buckled. Many criminals — petty thieves, syndicates — could not believe their luck and migrated to the rail environment.

The lack of policing was exacerbated by appalling management. The Railway Safety Regulator’s (RSR’s) first report appeared in 2005/2006. It referred to “ineffective safety management systems, a shortage of trained staff in safety-critical positions, and a lack of investment in safety”. Over the next decade, the RSR’s scathing criticisms continued, but there seemed to be little practical effect.

The safety record on freight operations was hardly better. The RSR report for 2017-2018 showed a 17% increase in train derailments on the previous year. Theft of assets and malicious damage to property rose 21% in the same period.

In December 2014, the media reported excitedly on the launch of the Afro 400, a new diesel locomotive “designed locally” by the 34-year-old “Dr Daniel Mtimkulu, head of a star team at Prasa’s engineering services division”. After five years as Prasa’s chief engineer, Mtimkulu was exposed as a fraud in 2015 and fired. He did not have a doctorate, only a matric certificate. Thirteen locomotives had already been delivered when it was discovered that they were “too tall” for South Africa’s railway infrastructure.

Lucky Montana, who as Prasa CEO had appointed Mtimkulu in 2010, said after the latter’s dismissal that Mtimkulu “was a genius of an engineer. It’s really unfortunate that South Africans equate academic qualification with competence to do the job.” Montana has been a prominent figure at the Zondo Commission of Inquiry into State Capture, along with other senior former railway executives: Transnet CEO Brian Molefe, TFR CEO Siyabonga Gama and Transnet CFO Anoj Singh.

What is to be done? The government must accept in principle that full or partial privatisation is the only way to save the railways. The biggest question, though, is whether the private sector would be interested in trying to salvage a network that may now be beyond repair. Meanwhile, all railway operations should be placed immediately under the Department of Transport, where policy is made and its implementation can be monitored.

We are now at the point where most of South Africa’s railway network is likely to be written off and closed. Unless the government gets the strategy, policy and governance structures right, and appoints men and women of integrity and competence who can execute a realistic, sensible strategy, the Covid lockdown of 2020 will come to be regarded merely as the last nail in the coffin. DM

David Williams is a former deputy editor of the Financial Mail.

This article is based on the paper Why There are So Many Trucks on the Road and so Few Trains on the Tracks written for The Brenthurst Foundation.