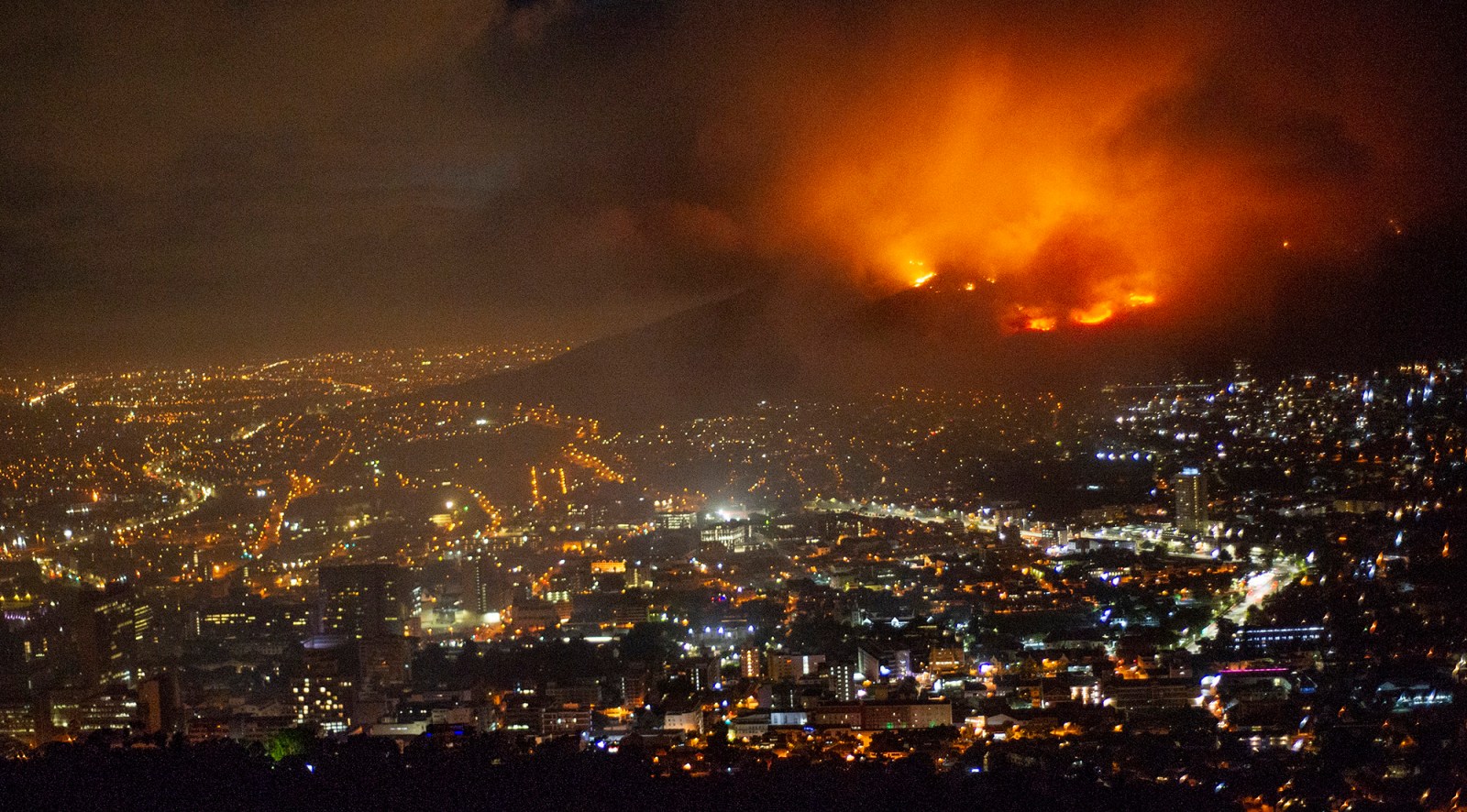 Just as it seemed the summer and autumn of 2020/21 could not exact a tougher toll on the locked-down city of Cape Town, the mother of blazes charred at least 400 hectares of natural world heritage on Table Mountain, gutted cultural treasures and sent hundreds fleeing.

During the first two days of dramatic weather in the wake of the runaway Rhodes Memorial fire – and a second southeaster-fanned fire – face-masked students evacuated the University of Cape Town (UCT) and City Bowl residents escaped Vredehoek’s populated perimeter.

On the mountain’s eastern slopes, the Rhodes Memorial restaurant – a cherished haunt among Capetonians – was forever claimed by flames. At UCT’s upper campus a little further down the drag, heritage buildings were destroyed, including the Reading Room in the nearly 200-year-old Jagger Library and potentially irreplaceable African literary gems. On the other side of the M3 motorway, fire consigned the 1796 Mostert’s Mill as we know it to history – although Friends of Mostert’s Mill has vowed to rebuild it.

The first blaze, reportedly started by an unattended vagrant fire, was sparked in the game camp area between UCT and Hospital Bend above Philip Kgosana Drive at about 8.45am on Sunday.

“Eight structures had reportedly been damaged and/or destroyed in the fire.” These included four buildings on the UCT campus, the Western Cape government noted.

Soon, as the fire raced over the lower slopes towards the memorial, a cloud of smoke, near-apocalyptic in immensity, loomed over the City Bowl. Whipping up its own winds, it could be seen across the metropolis. Water-bombing helicopters floated like toy craft against the might of that colossus, making it nigh impossible to get close enough to douse the inferno.

As the day wore on, the mercury climbed deep into the thirties.

More than 200 firefighters would be called to the frontlines while the notorious Cape Doctor – a gale-force southeaster – dished out its own dose of bad medicine, fuelling the out-of-control flames. By Monday evening, five firefighters – the brave foot soldiers of the mountain’s trenches – had been injured and taken to hospital, according to Western Cape Premier Alan Winde.

Visiting the campus during a briefing on Monday, Winde wished the injured firefighters a speedy recovery and said it was “devastating to hear of the loss of major heritage sites… along with vast tracts of land”.

It was five firefighters too many, during a conflagration whose ferocity no one had expected to feel this late during the fire season, which normally peaks in December and January.

Indeed, this has been an autumn of attrition.

On Sunday night, the fabled smoking contest between the devil and Van Hunks, the Dutch pirate etched into the fabric of the city’s legends, met its match in a suspected arsonist. Caught doing the supposedly unthinkable, a suspect in his thirties was taken into custody for reportedly starting a brand-new blaze, even as scores of firefighters still battled fire number one on the other side of Devil’s Peak above Philip Kgosana Drive.

At a press briefing on Monday, JP Smith, mayoral committee member for safety and security, said: “After dark, we suddenly started getting a flood of calls from people, saying, ‘Quick, quick, the community is seeing three people walking through the bush, with fires starting as they’re going.”

When a law-enforcement officer questioned the suspect about whether he had started the fire, Smith noted that, “The person responded in the affirmative and said, ‘Yes, I did.’”

Smith added: “He was spotted by a resident, who tracked him down with the help of his sons and the family’s dogs. The matter is with the SAPS for investigation and further details will follow as they become available.”

Night-time temperatures cooled the city somewhat, but the race against the mammoth fire was still heating up. When most Capetonians woke to a new working week on Monday, the kind of southeaster typically associated with the height of summer was tearing across the City Bowl.

Fire smoke mingled with clouds billowing out of Van Hunks’ and the devil’s pipes, and pushed the glowing haze towards the Atlantic Seaboard and on to the Foreshore. With the winds picking up by 2am, residents on Vredehoek’s wildland edge had started pouring out of their homes in the small hours. On their person and in their cars: their children, pets and most precious belongings.

Disaster Risk Management staff and volunteers evacuated several streets in the suburb, including the Disa Park residential towers and all nearby schools.

The following have been evacuated in Vredehoek: Ministerial Estate, Disa Park and Mountain View complex.

The Vredehoek fire had been contained by 2.30pm, when Philip Prins, Table Mountain National Park fire manager, released a statement.

Throughout much of the day, however, the southeaster rattled doors and windows like thin cymbals. The smell of smoke curled its tentacles through every conceivable crevice. And the wind, that merciless wind, would prevent firefighting corps from smiting the inferno. By Monday afternoon at 3.30, the fire had curled around the north face of Devil’s Peak towards Tafelberg Road.

Although four helicopters at some R36,000 an hour each had been deployed on Sunday, no aerial support was possible on Monday due to the unfavourable weather conditions.

On Monday night, fire crews from South African National Parks, Working on Fire, NCC Wildfires, the City of Cape Town, and Volunteer Wildfire Services were still working around the clock to suppress the ongoing fire.

UCT remained closed, yet Prins was hopeful that the wind would die by Tuesday morning, allowing aerial resources to be deployed to fight the remainders of the fire. He said the majority of it had been suppressed.

“The fire is still burning, with several flare-ups receiving attention. All efforts will continue throughout the night,” Western Cape government spokesperson James-Brent Styan told Daily Maverick at 7.45pm on Monday. “The wind remains a factor, but is projected to slow slightly. The evacuees have been allowed to return to their homes.”

Roads around the affected areas were still cordoned off, while fires were being monitored at Perth Road, Zonnebloem and De Waal Drive. There were active fires at Groote Schuur Hospital Drive and Deer Park, he said. DM/OBP

For firefighters, energy bars, energy drinks and light snacks can be dropped off at Roeland Street Fire Station in central Cape Town.

The public can donate essential items and food to students at Old Mutual West Campus, 91 Jan Smuts Road, Pinelands, Cape Town. Items must be sealed, in accordance with Covid-19 protocols. Financial donations can be made to (donor names can be included as references):

[TEAMWORK] Tortoise quenches his thirst! What an amazing effort by the Devil’s Peak Vredehook Neighbourhood watch, you guys rock! https://t.co/JBTkhpNNuR

To help care for wildlife/other animals affected by the fire, the Cape of Good Hope NSPCA has called on the public who reside in affected areas to:

For more information, visit the organisation’s How to Help page.