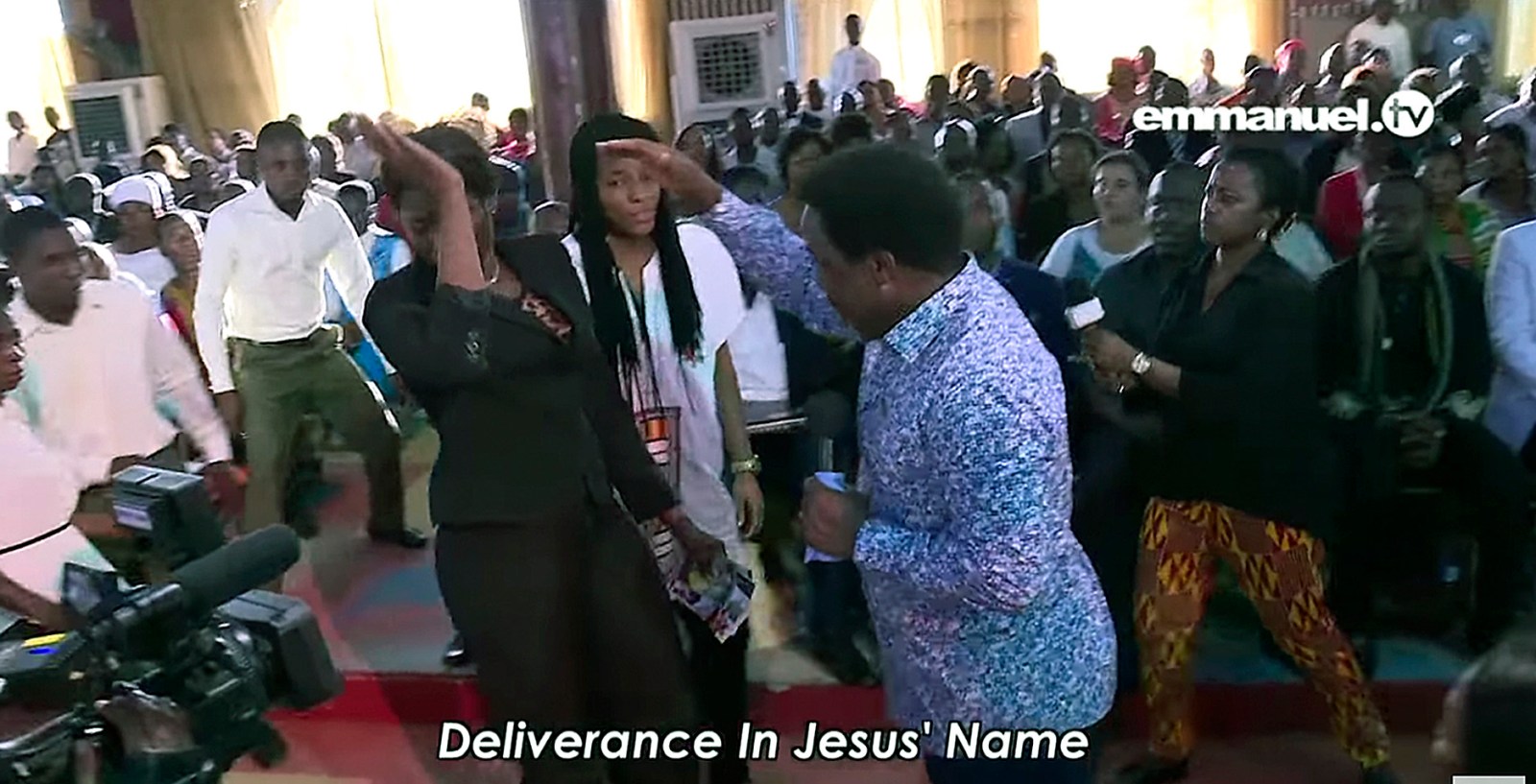 In response to openDemocracy’s enquiries about TB Joshua’s controversial exorcisms, YouTube terminated his channel. Facebook says it has removed certain posts, but a number are still visible, and MultiChoice, which broadcasts his 24-hour channel, did not respond.

Pastor TB Joshua, the controversial Nigerian televangelist, hits Mary Okoye’s head and she falls to the floor. When she gets up, he hits her again and tells her to call her “second”, another woman he refers to as Okoye’s “wife”.

Joshua slaps and pushes Okoye and the unnamed woman at least 16 times and tells Okoye: “There is a spirit disturbing you. She has transplanted herself into you. It is the spirit of woman.”

This scene, which appears in a video uploaded to YouTube in April 2018, then changes to events a week later. Okoye, accompanied by her mother and two sisters, testifies before Joshua and his congregation that “the spirit of woman” had been destroying her life. But now, thanks to Joshua’s intervention, she has “no affection whatsoever” for her “second” and “now I have affections for men”.

The video has been watched more than 1.5 million times on TB Joshua Ministries’ YouTube channel. It appeared first on Emmanuel TV, a television station owned by Joshua’s Lagos megachurch, The Synagogue, Church of All Nations.

Between 2016 and January 2020, the channel posted at least seven similar clips showing the charismatic Christian televangelist engaging in violent exorcism to “cure” gay and lesbian congregants of their sexual orientation by casting out “the demon of homosexuality”.

YouTube closed the channel, which had more than 1.8 million subscribers, on 12 April after openDemocracy contacted it to ask whether this content violated the platform’s community guidelines.

“YouTube’s community guidelines prohibit hate speech and we remove flagged videos and comments that violate these policies. In this case we have terminated the channel,” a YouTube spokesperson told openDemocracy.

YouTube says it “prohibits content which alleges that someone is mentally ill, diseased, or inferior because of their membership in a protected group including sexual orientation”.

“So-called conversion therapy is neither therapy, nor does it result in conversion” and it has been recognised as being “tantamount to torture”, said Rudusa.

OutRight’s Yvonne Wamari, who manages a project fighting conversion therapy in Africa, said that research among the LGBTQI community in Nigeria found that almost half of the respondents had undergone similar rituals, mostly conducted by religious leaders.

The TB Joshua Ministries Facebook page has more than 5.6 million followers. Unlike YouTube, which terminated the ministries’ entire channel, Facebook says it has “removed a number of pieces of content from this page for violating these policies”.

“We don’t allow attacks against people based on their sexual orientation or gender identity, including content promoting conversion therapy services,” said a Facebook company spokesperson. “We take attacks on the LGBT+ community incredibly seriously and encourage people to report this kind of content when they see it so we can investigate.”

But at the time of publication, this 16-minute video in which Joshua claims that a young man, Eugene Monama, “is a man with a woman inside him”, was still available on the ministries’ Facebook page.

During their exchange, Joshua describes Monama as walking and talking like a woman, while slapping and punching him numerous times. The pastor then says he is casting out the “spirit of woman” and claims Monama is “free”. Later, Joshua’s officials cut off Monama’s dreadlocks and the young man says he is no longer attracted to men.

One of the exorcisms since taken down from Facebook claims to “cure” a man of “the bondage of the spirit of homosexuality and bedwetting”.

Emmanuel TV is broadcast throughout Africa by DStv, which is owned by the MultiChoice Group, an entertainment company based in South Africa. MultiChoice did not respond to openDemocracy’s query about whether Emmanuel TV’s content violated the country’s Constitution, which prohibits discrimination against people on the basis of their sexual orientation.

openDemocracy also asked TB Joshua Ministries to comment on its pastor’s actions towards LGBT people, and on its YouTube channel being terminated for hate speech. The ministry did not respond. However, it has launched a social media campaign to contest the decision, which it claims was “made in haste”.

TB Joshua, a Nigerian pastor in the “prosperity gospel” mould, is said to be one of the 20 richest preachers in the world. In 2015, he was reported to have bought a $60-million Gulfstream jet via a front company.

In 2011, Forbes estimated his net worth at $10-15-million. In 2006, Joshua and his wife, Evelyn, were named in the Panama Papers as having incorporated a company called Chillon Consultancy Limited in the British Virgin Islands, according to Nigeria’s Premium Times. However, Joshua denied this.

Hanzline Davids, who works with the Inclusive and Affirming Ministries (IAM), a pan-African network that champions LGBTQI rights in religious organisations, says that Joshua promotes the notion that LGBTQI people are “bad spirits” blocking prosperity.

“Parents from poor communities bring their children that are LGBTQI-identifying to Joshua’s services, in the hope that their ‘bad omen’ child will be turned into something good, and they will start to have ‘good luck’ and prosperity,” says Davids, who is a former reverend with the Uniting Reformed Church in Southern Africa.

For the people taken for these “conversions”, said OutRight’s Wamari, “these practices have a long-term negative impact on every realm of life, causing deep, lasting trauma, which contributes to internalised homophobia, depression, anxiety, suicidal ideation and substance abuse as a coping mechanism. In a number of instances, individuals have taken their lives.”

TB Joshua remains popular in South Africa despite the collapse of a Lagos guesthouse belonging to his ministry which resulted in the deaths of 116 people, including 85 South Africans. Joshua was charged for the poor workmanship of the guesthouse, despite claiming it collapsed because a “mysterious plane” had flown over it, but the case has yet to be heard in court. DM/MC

Kerry Cullinan is the southern Africa correspondent for openDemocracy