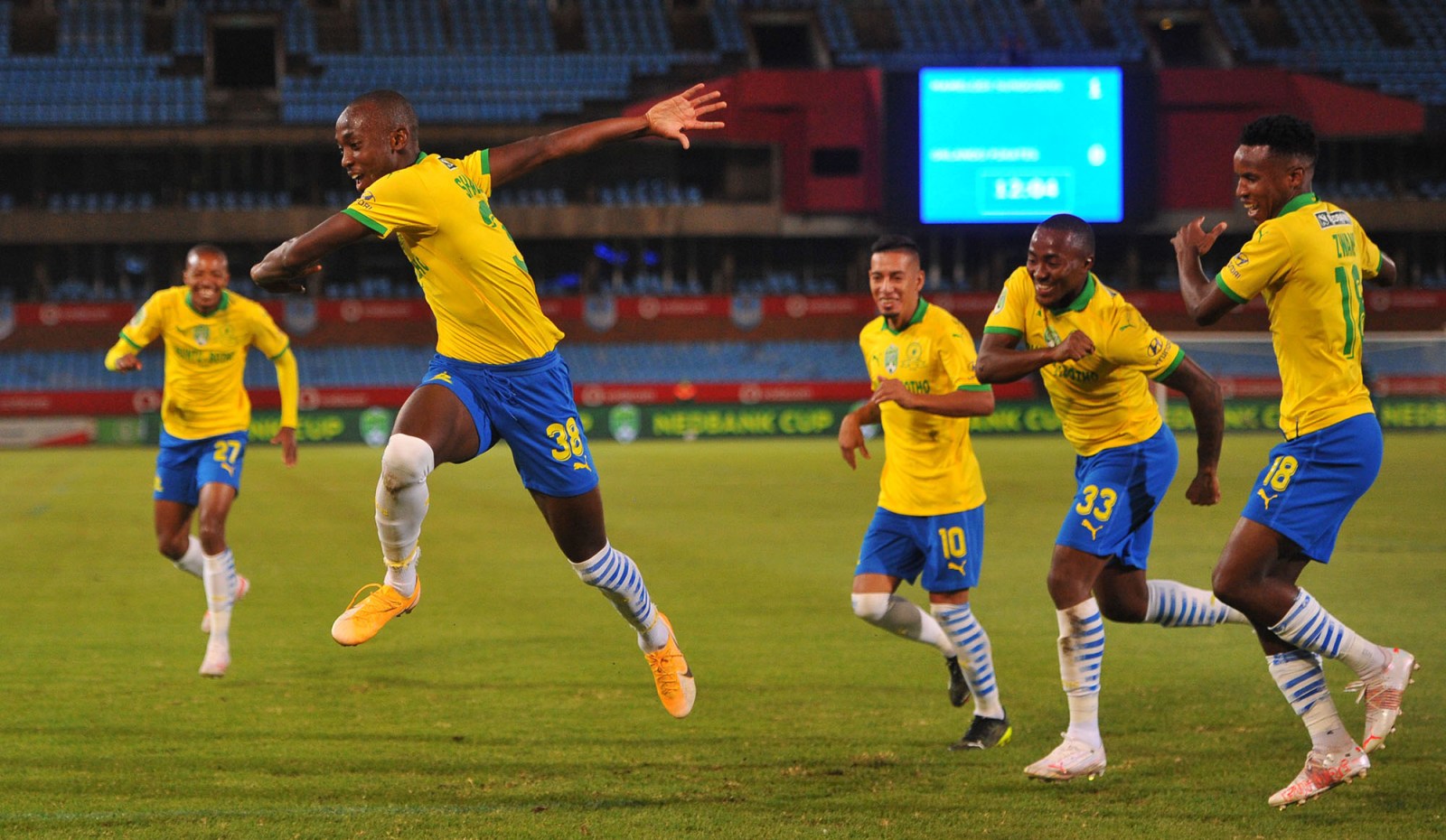 Peter Shalulile of Mamelodi Sundowns celebrates a goal with teammates during the 2021 Nedbank Cup Quarterfinal match between Mamelodi Sundowns and Orlando Pirates on the 15 April 2021 at Loftus Versfeld Stadium (Photo: Sydney Mahlangu/BackpagePix)

The semi-finals of the Nedbank Cup are upon us, with two of the semi-finalists in Chippa United and Pretoria Callies having an opportunity to reach their first-ever cup final. Meanwhile defending champions Mamelodi Sundowns are favourites to win the whole competition, but in Tshakhuma Tsha Madzivhandila they face an opponent with nothing to lose and much to gain.

Mamelodi Sundowns are still on track to defend their Nedbank Cup title after demolishing Orlando Pirates in a delayed fixture on Thursday evening, owing to the two sides’ continental football commitments.

Chippa United, Pretoria Callies and Tshakhuma Tsha Madzivhandila (TTM) had already booked their spots in the last four over a month ago. The draw pitted Chippa against Callies, while TTM would have to contend with either Sundowns or Pirates.

The Limpopo side now know for sure that it is Masandawana that they will seek to strike down this weekend.

With the efficiency that the Tshwane giants displayed in their 4-1 win against the Buccaneers, TTM might be shaking in their boots at the prospect of trying to halt the Sundowns freak train.

“Maybe they [the Pirates players] had too much respect, I don’t know, but after the game you don’t have the right answer. I’ll watch my game again and then we find the points where we have to improve for the next game.”

For Sundowns, despite the big margin of their victory, they will be looking to improve even further. Had the team been slightly more clinical, particularly in the first half, the match could’ve easily ended with the reigning Nedbank Cup champions netting two or three more goals than they managed.

Their opponents in waiting, whom they will clash with on Sunday, are confident that they can manage an upset, more so considering they have nothing to lose, and many will have written them off as vanquished before the game even starts.

“I told them to give it their best shot and win. I know nobody believes or fancies us to win anything and we have to go against the odds,” said TTM technical team advisor Dylan Kerr.

This is the same advice that Sundowns co-coach Manqoba Mngqithi has shared with the DStv Premiership rookies.

“If they decide to sit back, I think they [TTM] will make the game very easy for us,” said a confident Mngqithi after the game against Pirates. “If I was them, I would take the game to Sundowns because you have nothing to lose. I think their coaches are aware of that, when you play against Sundowns you better give your best shot.”

The underdogs in the first semi-final, GladAfrica Championship side Callies will be slightly more confident as they endeavour to reach their first-ever final.

In Chippa they face a team that finds itself fighting desperately to stave off relegation from the top flight. Less than a fortnight ago, the Eastern Cape-based side axed coach Dan Malesela just four months into his fourth stint with the club.

His assistant, 31-year-old Siyabulela Gwambi, has since taken over the reins on an interim basis.

“We must not give them a chance. Because if we leave them [to play their game], we are going to fall behind. We need to go in and we need to give everything. If we can score many goals [early on], we can rest our players for the Premiership game against Baroka on Tuesday,” said Chippa forward Bienvenu Eva Nga.

Just like Callies, the Chilli Boys have an opportunity to add another page to their history. If they progress past their Atteridgeville-based opponents, they will make a final for the first time in their history. Something Eva Nga is confident they can achieve.

For Callies, their foray so deep into the Nedbank Cup has been a great buffer for their struggles during what is their first season in the GladAfrica Championship.

They are currently 11th on the log with 27 points after 22 games. More importantly, they are only four points away from 15th-placed Cape Town Spurs, but have played one game more.

Should they indeed reach the final, they will be dreaming of matching the achievement of TS Galaxy, who beat Kaizer Chiefs in the final of this competition as a second-tier club a couple of seasons ago.

Kick-off for the Chippa and Callies game is on Saturday at 15:00, while Sundowns versus TTM will take place a day later, also at 15:00. DM