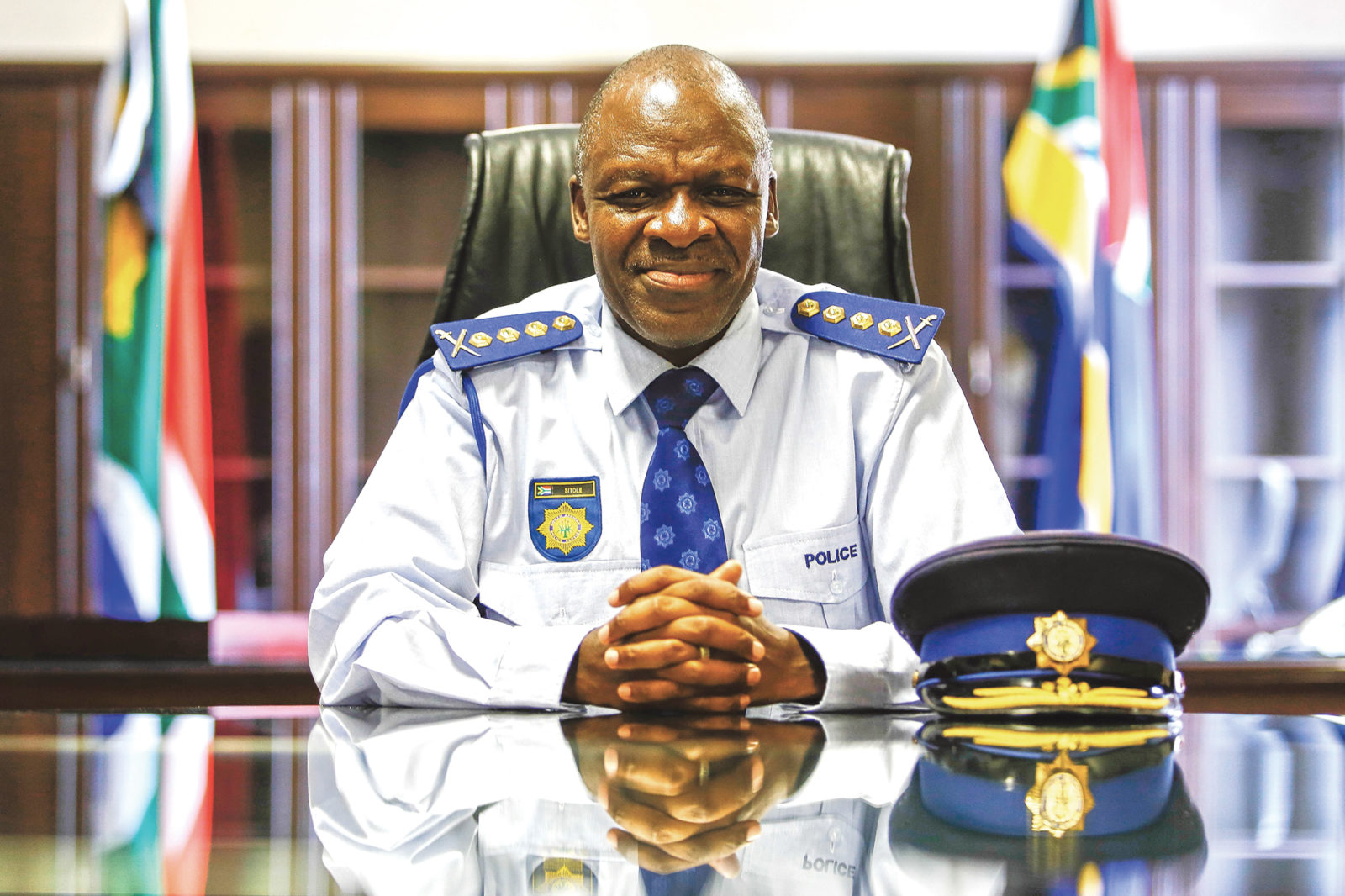 The National Police Commissioner wants to give his side of the story about the ‘Nasrec grabber’.

In 2021 Sitole is fighting for his job after Minister of Police Bheki Cele called for an inquiry into his fitness to hold office in light of a scathing high court judgment that Sitole and two of his deputies breached their duties.

This was in relation to the classification of documents linked to an allegedly unlawful procurement by the police’s Crime Intelligence division of a surveillance device, a grabber, at the inflated price of R45-million prior to the ANC’s elective conference at Nasrec in 2017.

Sitole has appealed the court finding and has subsequently approached President Cyril Ramphosa to hold off on the inquiry because he would like to be afforded an opportunity to clearly set out his side of exactly what went down at the Protea Hotel in Pretoria on 13 December 2017.

Tyrone Seale, acting spokesperson for the Office of the Presidency, has confirmed to DM168 that Sitole had made a “submission” to Rama­phosa, which was receiving “due consideration”.

A few months prior to Sitole’s “surprise” appointment in 2016, Corruption Watch and the Institute of Security Studies launched a vigorous public campaign for a more transparent selection of the heads of the SA Police Service (SAPS) and the Directorate for Priority Crime Investigation (DPCI) or Hawks.

This is in line with recommendations in the National Development Plan.

Sitole seemed to have come from “nowhere” to occupy the tainted position. The fact that almost every commissioner before Sitole left the office in ignominy – and that it was Zuma who appointed him – has weighed heavily on the softly-spoken, Standerton-born Khehla John Sitole.

It is important to bear in mind that Sitole has not explained why he was at that meeting, which was captured on the hotel’s CCTV system, and neither does his presence there implicate him in any wrongdoing at this point.

Though Sitole has been called out by the courts for the SAPS’s three-year pushback against an Independent Police Investigative Directorate (IPID) investigation into the grabber procurement by avoiding declassification of the documents,

Sitole, as the accounting officer, did call off the deal. This he did after being tipped off by IPID, then headed by Robert McBride.

Sitole’s action suggests two possibilities. Either he was unaware of the true nature of the deal, having been in the job for only two months, or he was aware and only called it off after being made aware that IPID was on to the scam. It is probable that, as the accounting officer, Sitole knew he would have to carry the can.

Sitole has now asked for an opportunity to present his version to Parliament’s police committee.

According to Sitole’s court papers related to the “Nasrec grabber solution”, the deal was being pushed by then Crime Intelligence acting head Major-General Bhoyi Ncgobo. Ncgobo was appointed by Zuma in November 2017.

The decision to procure the grabber, Sitole has said in court papers, had been taken at “Cabinet level” after intervention by a “minister in the Security Cluster”. This after Crime Intelligence had identified some massive undisclosed “threat” to the national security of South Africa on the eve of the ANC’s Nasrec conference.

Whatever the threat, the high court did remind Sitole and his deputies that this did not justify deviating from mandated procurement protocols to facilitate a corrupt and criminal purchase at an inflated price.

The presence of Bo Mbindwane, “special adviser” to the then minister of police, Fikile Mbalula, at the Protea Hotel meeting was explained by

Sitole as being necessary because the decision had been made at such a high executive level.

Meanwhile, it has come to light that a comprehensive State Security Agency sweep of possible threats to the ANC’s elective conference found no major issues and certainly no threat to the country’s national security (see accompanying story here), contrary to alleged claims by Crime Intelligence.

Sitole’s deputy, Vuma, is herself the subject of an investigation by the DPCI for alleged PPE procurement fraud amounting to R200-million. Later, when Sitole provisionally suspended Crime Intelligence head Peter Jacobs for alleged PPE fraud, it was Vuma he tasked with investigating the matter.

Jacobs was placed on a precautionary suspension by Sitole after the CI head’s alleged involvement in an irregular R500,000 PPE procurement from the secret service fund.

Jacobs, in his challenge to Sitole, attached a Treasury Note allowing for the emergency procurement from the secret service fund. Jacobs has maintained that he is being sidelined by Sitole and other senior cops as he had uncovered massive corruption and had reinstituted investigations into colleagues.

The face-off between Sitole and Jacobs has drawn in Cele and has further exacerbated the position of the National Commissioner at this point.

Prior to his appointment, Sitole, a decorated officer, had kept a low profile. At the time, Johan Burger of the Institute of Security Studies remarked that Sitole’s “anonymity” had made him “a surprising candidate”.

Among Sitole’s decorations are the South African Police Star for Outstanding Service as well as the SAPS Medal for Faithful Service.

The only blip he made on the public radar was when Nkosazana Dlamini Zuma was granted SAPS VIP protection on returning to South Africa after her term as African Union Commission chairperson. Sitole was never able to satisfactorily answer about this deviation of protocol.

After Sitole’s appointment, DA spokesperson on policing Zakhele Mbhele, while acknowledging Sitole’s experience as a senior career officer, added  “we are not convinced that he has the backbone to resist political pressure on the SAPS”.

It is important to hold in mind that under Sitole’s watch at least 40 top SAPS officials have been either suspended or charged with fraud and corruption, including former acting commissioner Khomotso Phahlane and Deputy National Commissioner Bonang Mgwenya.

It is also significant that Sitole committed himself to eradicating deep-rooted corruption in the SAPS.

The “Nasrec grabber” incident and the National Commissioner’s desired attempt at explaining it hopefully will reveal some of the political and criminal undercurrents that pulse through the SAPS.

The question will be: Who will be tossed under the bus?

Sitole joined the SAPS in 1986 as a student constable and became a commissioned officer in 1988. He steadily rose through the ranks and was appointed as an Assistant Commissioner in Mpumalanga in 2000.

Many were sad to see Sitole leave the province when his ally, former National Commissioner, Riyah Phiyega, transferred him to the national office.

Sitole must have known that one of his biggest challenges would be dealing with the endemic and deep-rooted criminality in Crime Intelligence, mismanaged and looted for years by its former head Richard Mdluli.

In fact, a short while after Sitole’s appointment, Captain “KGB” Tshabalala, a covert Crime Intelligence agent, now implicated in running a similar scam to the “Nasrec grabber” one at the ANC’s 2012 Mangaung elective conference, was arrested.

Tshabalala, a convicted criminal, had managed to escape justice and has remained footloose and fancy-free until he was finally jailed in 2013. In 2016 it was discovered he was still on the SAPS payroll.

Interviewed shortly after his appointment, Sitole said that failure to turn around the SAPS “was not an option”.

He said he was in matric when it dawned on him that he had a “calling” to serve in the SAPS. He was a good student whose marks had prompted his teachers and parents to suggest he study medicine.

It was, he said, his “patriotism” that drew him to the SAPS as the political climate around him transformed.

In November 2017 he accepted the top job with a promise to keep experience where it belonged, “on the ground”.

Burger at the time said that Sitole had substantial experience.

“It’s obvious he has practical policing experience as well as managerial experience.” He said there is always suspicion over Zuma’s appointments “but in this instance it seems like it’s a firmly good choice”.

Sitole’s refusal to declassify the documents or answer any questions related to the Nasrec grabber is what has landed him in his current position.

The high court was scathing about Sitole, Vuma and Tshumane’s convoluted attempts at avoiding accountability, stating that the top cops had protected the interests of the ANC and not those of SA.

Did Sitole just find himself in the wrong place at the wrong time with regard to the Nasrec Grabber scandal, or was the newly minted National Commissioner not yet firmly in control when he was informed that the command for the grabber procurement had come from higher up?

In any case, Sitole will have to explain whether, in the end, like his predecessors, he fell prey to political masters, thus confirming Mbele’s comment about “the backbone to resist political pressure” – or whether the national commissioner has acted, or not acted, within or outside the powers of his office. DM168 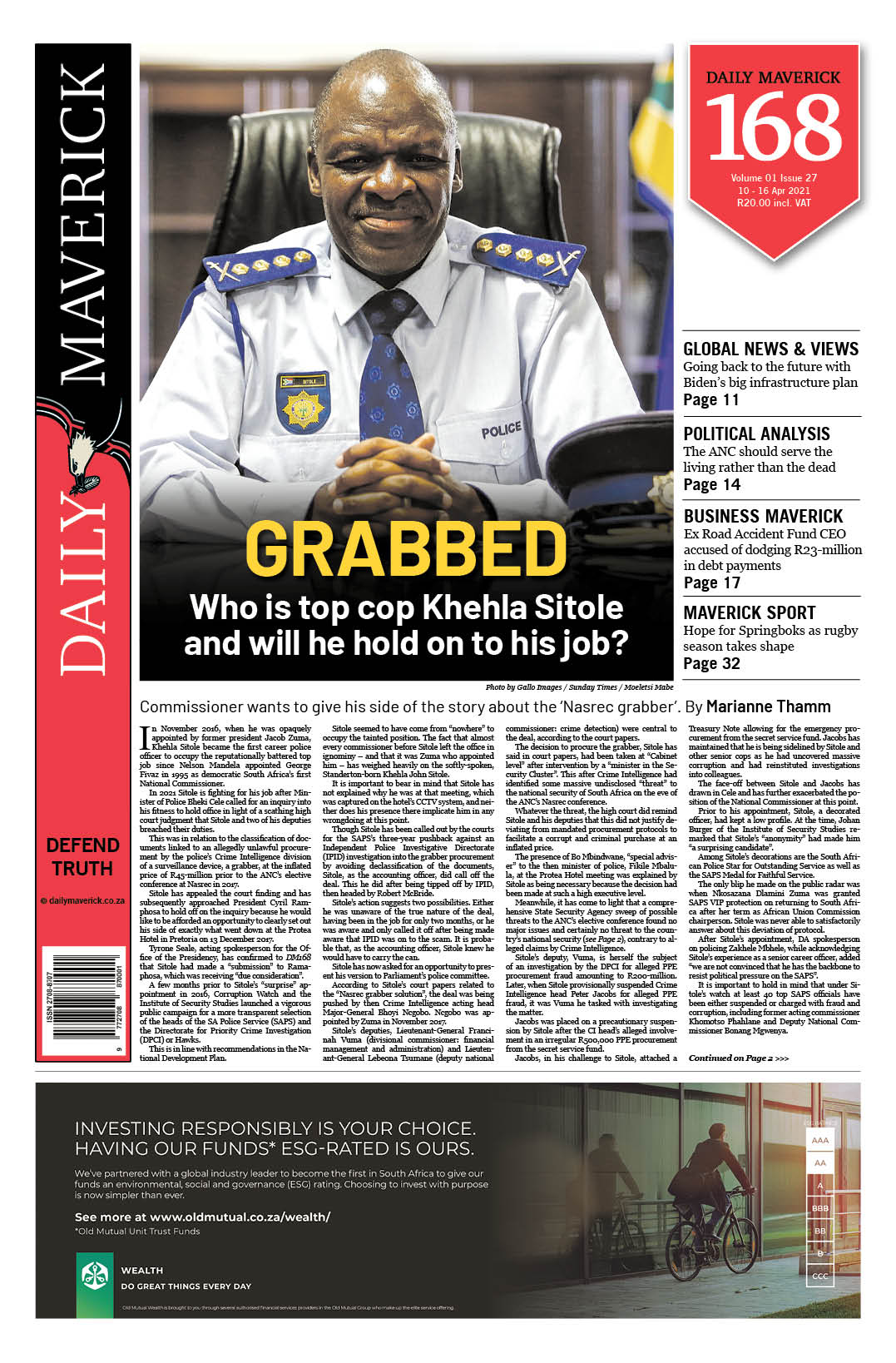