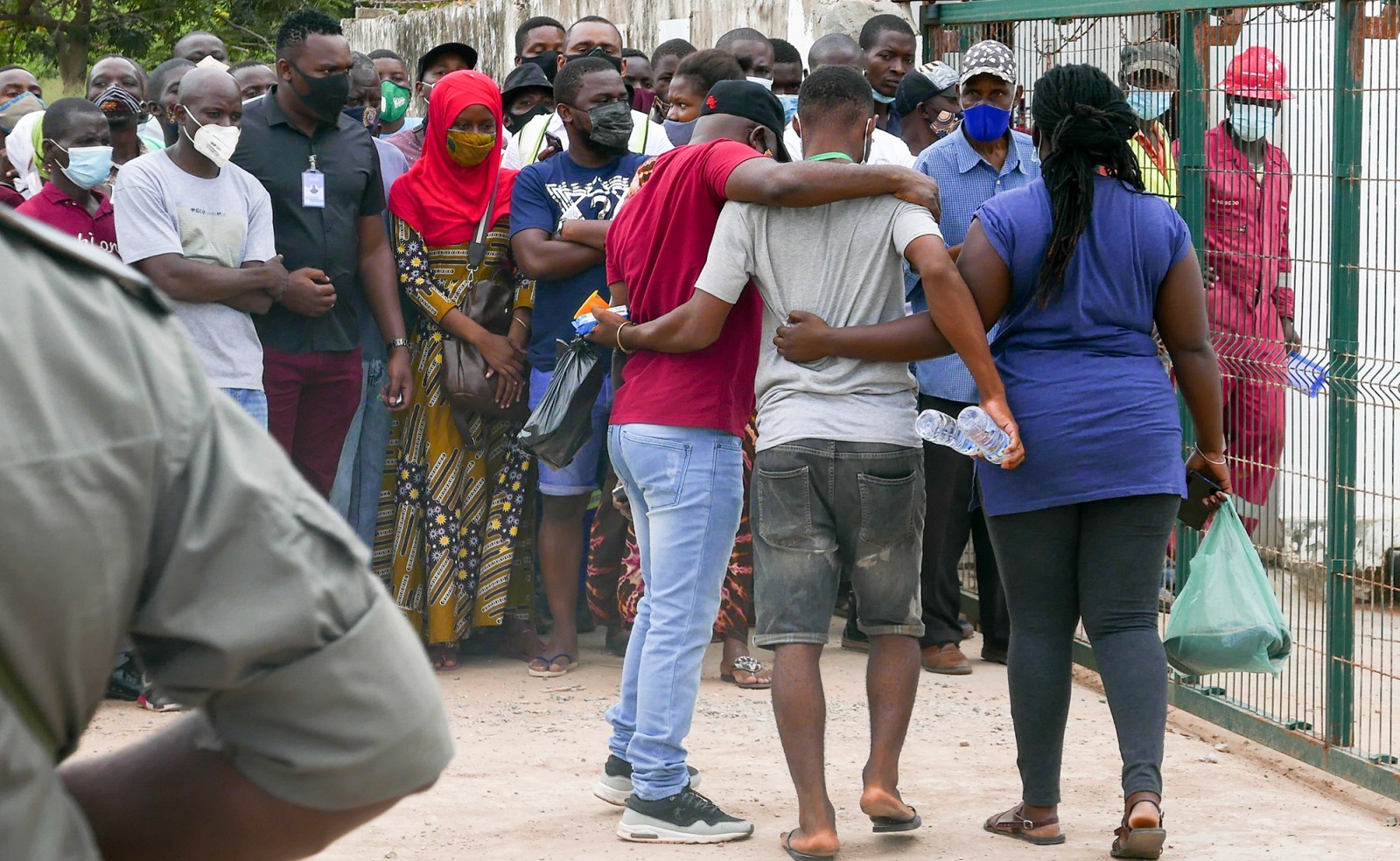 Relatives welcome a family member on 1 April 2021 after arriving at the port of Pemba on a boat carrying 1,200 people who fled an insurgent attack in Palma, northern Mozambique. (Photo: EPA-EFE / Luis Miguel Fonseca)

Regional leaders moved closer to military intervention in Mozambique on Thursday, deciding to deploy a technical mission immediately to assess what neighbouring countries could do to help Maputo counter a growing Islamist insurgency.

A SADC technical mission to Mozambique, decided at a summit in Maputo on Thursday, is seen as a planning mission for what the leaders called “a proportionate regional response”, possibly a military intervention.

Zimbabwe President Emmerson Mnangagwa told journalists that the summit had agreed that the standby force of the Southern African Development Community (SADC) “should be resuscitated and capacitated immediately so that it can intervene”.

“The defence and security chiefs now have the responsibility to implement the decisions of the double troika,” he said. The meeting was a summit of SADC’s double troika, comprising the leaders of SADC’s troika — Mozambique, Malawi and Tanzania — and the troika of SADC’s security organ — Botswana, South Africa and Zimbabwe.

Mozambique President Filipe Nyusi has so far resisted appeals by SADC to allow it to intervene to prevent the three-year-old insurgency in northern Mozambique from spilling over Mozambique’s borders.

But at Thursday’s summit, he offered no objection, according to official sources. The summit was prompted by a major insurgent attack on the coastal town of Palma in Mozambique’s northernmost Cabo Delgado province, beginning on 24 March 2021, in which dozens of locals were killed and at least two foreign contractors, one a South African.

Official sources said that at several past SADC summits regional leaders had asked Nyusi what he wanted them to do and had waited patiently for him to respond.

“This time they told him what they wanted to do,” one official said. He said the tightness of the timetable of action which the leaders agreed on showed this was a different kind of meeting.

According to a communique issued afterwards, President Ramaphosa and the other leaders directed the deployment of a technical assessment team to Mozambique “immediately”. An official said the team from SADC’s security organ had been given until 16 April to get to Mozambique. The team has been instructed to complete the assessment of the situation in Cabo Delgado and to report back on its findings to ministers of the security organ troika by 28 April. The ministers will in turn report to the security organ summit on 29 April in Mozambique.

The fact that Thursday’s summit did not announce any immediate deployment of a SADC military intervention force has been interpreted by some as a sign that Nyusi once again fobbed off his neighbours. But officials insisted this was not so.

“I have no reason to believe he is not going to cooperate,” an official said.

“It’s quite paramount that we must be seen to be doing something — taking action,” he added. “We are quite aware that the world is waiting to see what we are going to do.”

Alex Vines, a Mozambique expert and head of the Africa programme at Chatham House, agreed that Nyusi was no longer playing for time.

“I see it as some baby steps forward. A SADC team going into Mozambique to make an assessment on FDS (Mozambique defence and security forces) gaps and how SADC members can support the Mozambique government is helpful.

“There needs to be a proper needs assessment — to match what the region can realistically offer.

“I never expected more right now — but Maputo accepts it needs technical support and knows it needs to offset the reaching out to northern partners (Portugal, US, UK, France and others) with accepting support from regional neighbours.”

The summit communique “noted with concern, the acts of terrorism perpetrated against innocent civilians, women and children in some of the districts of Cabo Delgado Province of the Republic of Mozambique; condemned the terrorist attacks in strongest terms; and affirmed that such heinous attacks cannot be allowed to continue without a proportionate regional response.” DM