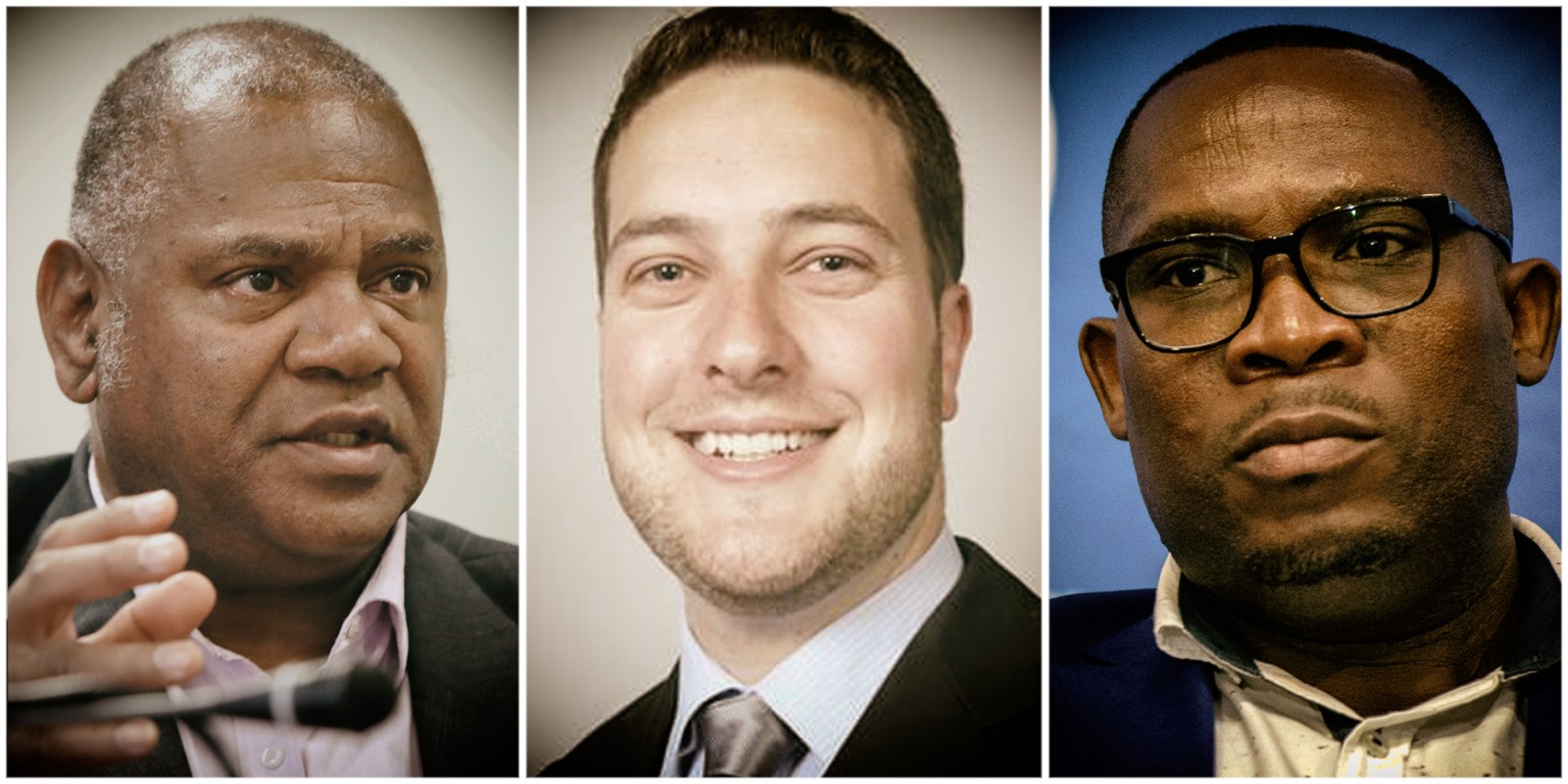 Ahead of the local government elections this year, political parties are beginning to consider which candidates to put forward as mayors. When it comes to Cape Town, there’s no shortage of volunteers – with three DA heavyweights going head to head.

Nominations have now closed for the DA candidates hoping to stand as Cape Town mayor, with three high-profile names – Dan Plato, Bonginkosi Madikizela and Geordin Hill-Lewis – confirmed as being in contestation for the position.

This is one of the most sought-after positions within the party, because it is regarded as a safe seat. The smart money is still on the DA to comfortably take the Cape metro in the local government elections this year, so the candidate who emerges victorious from the DA’s internal selection process will almost certainly end up wearing the mayoral chain in Cape Town and wielding actual political power.

What follows now is a screening process and interviews carried out by a selection panel consisting of the party’s top brass, including the chairperson of the DA’s Federal Council, Helen Zille. There is no wider party vote for the successful candidate, which should theoretically limit the chances of the contest turning into the kind of bruising factional dispute that the DA has repeatedly endured.

The stakes are high, however, because the party’s electoral prospects will be linked to some degree to the face on the DA posters. None of the three major candidates is tested in this regard. The incumbent, Dan Plato, has never led the DA to victory in local government elections.

As Plato pointed out in an email to colleagues seen by Daily Maverick, he has “twice stepped in as caretaker to carry this council forward in a middle of a term”.

The first occasion Plato served as Cape Town mayor was for two years in 2009, when he was given the nod to take over from Zille while she moved to take up the premiership of the Western Cape. The second occasion was his current term, which began in 2018 after the chaotic and premature departure of mayor Patricia de Lille.

Both times, Plato wrote, he has had to “inherit processes, systems, IDPs, budgets and visions”.

Now he is asking for the chance to set his own vision: one “built on the needs of our people and a real understanding of this city”.

Of the three candidates, 60-year-old Plato has the longest record of City of Cape Town service, as a former National Party councillor who has been a member of the council executive since 1997. Within the party Plato is viewed as a dependable choice: a DA loyalist who knows where the bodies are buried (perhaps literally; in his former role as MEC for community safety he attracted controversy for his relationship with police informants) and can be relied on to keep serving without major scandal.

What Plato lacks is the spark of his predecessor, Aunty Pat  – and, perhaps, the wide public popularity. Although insiders say Plato’s commitment to uplifting, in particular, the residents of the Cape Flats cannot be questioned, his public appearances during both his mayoral terms have not always proceeded smoothly. In 2009 a woman smacked him in the face during a surprise visit to Blikkiesdorp; just weeks ago, Plato’s tussle with an Ocean View resident went viral.

Plato has perhaps been hamstrung by having the latter part of his mayoralty take place during conditions of lockdown, but his public visibility as mayor of Cape Town has also been relatively low. Plato’s communications team has pleaded with the media to give more coverage to initiatives from the mayor’s office such as a weekly food drive during the Covid-19 pandemic.

It’s highly likely that De Lille would have seized the pandemic as an opportunity for further personal branding, and rolled out citywide campaigns featuring her face wearing a mask, and so forth. There has been none of this showboating from Plato, which ultimately may be to his detriment. At times of insecurity and fear like the Covid-19 emergency, citizens look towards leaders for reassurance and support. It is Western Cape Premier Alan Winde, rather than Plato, who has largely played that public role.

Going head to head with Plato is the current DA provincial leader, Bonginkosi Madikizela, who has been a fixture of Western Cape politics for the last 15 years or so. Madikizela (46) was another beneficiary of the De Lille turmoil, having replaced her as Western Cape party leader in 2017 when she left the position prematurely. Madikizela was elected for a second term in late 2020.

Madikizela was a member of Zille’s first provincial Cabinet in 2009. According to the Western Cape government website, he boasts the claim to fame of being the longest-standing provincial human settlements minister in South Africa, having held the position as Western Cape MEC from 2009 to 2019.

Whether this is an effective boast is another story. The Western Cape’s housing crisis has escalated during those years, with NGO Ndifuna Ukwazi stating on Wednesday that the “city’s failure to address a major affordable housing shortage” is evidenced by the fact that there are now approximately 14,357 people living on the streets of Cape Town.

It will take courage to unshackle Cape Town from the consequences of crumbling national services, to secure a future for residents and their children.

Madikizela indicated on social media that he would not be undertaking a public campaign for the mayoral position “but will subject myself to the selection panel, the only structure that will make the decision, not the public”.

The provincial leader is a known ally of Zille. He initially announced his intention in 2019 to throw his hat in the ring for the DA’s top position – eventually won by John Steenhuisen – but subsequently withdrew his candidacy. There were rumblings at the time that he was persuaded to do so in exchange for receiving backing for another post. Could the mayoral race be Madikizela’s payback time?

The third candidate vying to be the DA pick for the party’s Cape Town mayoral contender is the youngest, at 34 years old, and the most surprising. Geordin Hill-Lewis is currently the party’s spokesperson on finance and, as an MP, one of the DA’s most senior and active figures in the parliamentary caucus. Hill-Lewis has played a key role in setting economic policy for the party and is unquestionably one of the DA’s sharpest minds.

Hill-Lewis is also one of the party’s canniest political operatives. Despite being close to the centre of DA power for more than a decade, he has managed to publicly appear to keep his hands clean from the fray of factional disputes. Quite unusually for the DA’s top brass, he maintains good relationships with journalists – many of whom will have noted, for instance, his recent intervention in defence of eNCA’s Lindsay Dentlinger.

Hill-Lewis’s departure from the parliamentary caucus would be a blow to that body. In a letter to colleagues announcing his candidacy, Hill-Lewis explained the bid as motivated by Cape Town’s needs, with the city facing “challenges that were previously unthinkable”: load shedding, broken public transport, crime.

“Only a clear and bold vision can overcome the extraordinary threats we face,” Hill-Lewis wrote, in a message that hinted that if successful, he intended to use his mayoralty to push the legislative limits of the Western Cape’s provincial powers even further.

“It will take courage to unshackle Cape Town from the consequences of crumbling national services, to secure a future for residents and their children.”

Of the three candidates, Hill-Lewis has the least experience on the coalface of provincial governance, and his appeal as an electoral draw is again untested. The DA must, surely, consider the optics – or, y’know, the genuine representation problem – of potentially having two white men in position as Cape Town mayor and premier.

Then again, perhaps any consideration of race is considered kowtowing to the demons of wokeness under the Steenhuisen-Zille leadership team: the party recently voted in another white man as KwaZulu-Natal provincial leader. DM