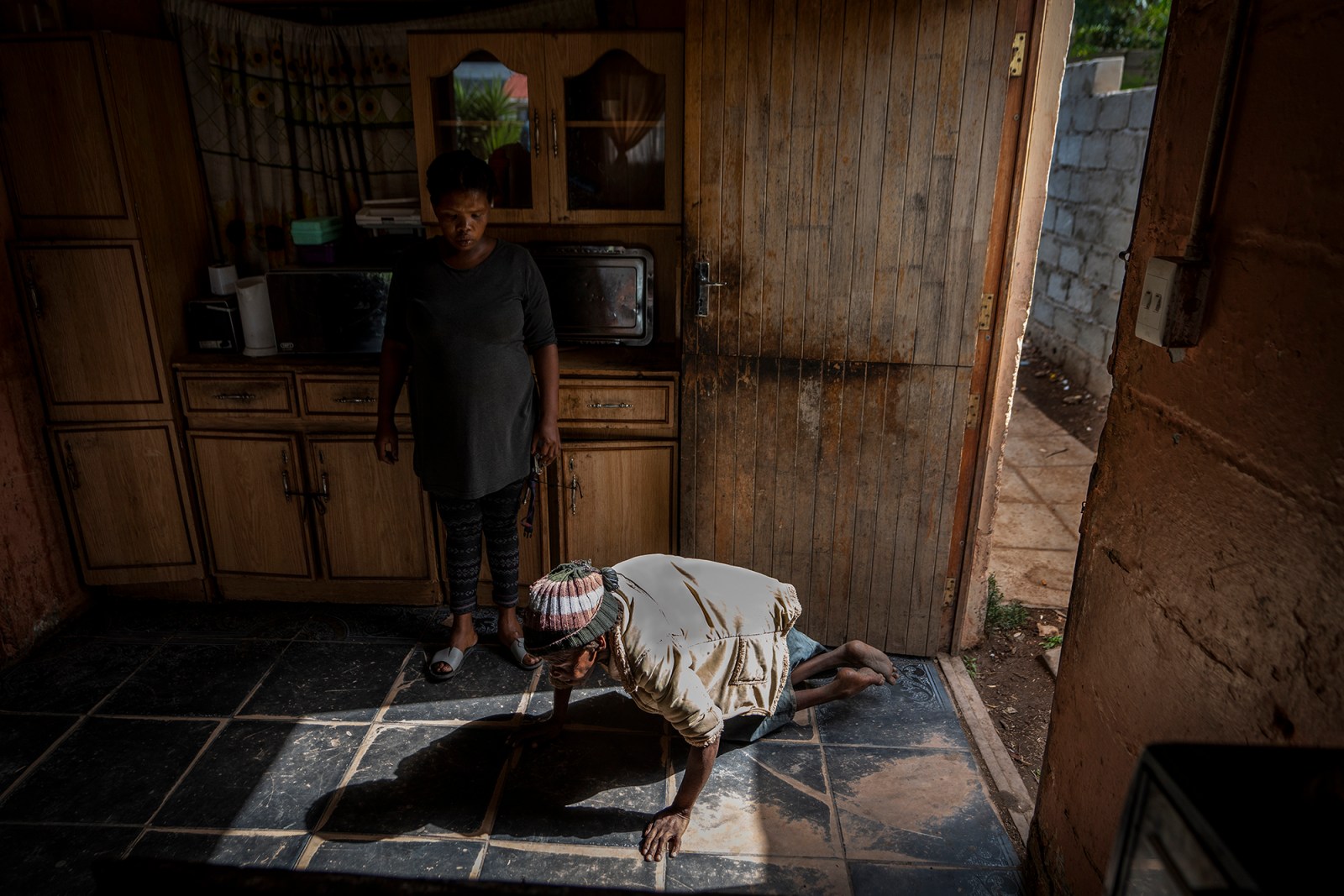 Eunice Ndokweni crawls through her house in Uitenhage. Ndokweni who was born with clubfoot is unable to stand or walk. Photo: Shiraaz Mohamed

Simple daily tasks have to be undertaken at excruciating physical and emotional cost – because there are no wheelchairs for the disabled in the Eastern Cape.

This article was produced in collaboration with Spotlight.

Eunice Ndokweni is a vibrant, 56-year-old woman who does all her household chores herself, despite being born with clubfoot, which means she is unable to walk or stand.

Ndokweni crawls to help herself around the four-room house she shares with nine family members in Uitenhage in the Nelson Mandela Bay metro. Her hardened, darkened knees and blisters on her feet are evidence of the excruciating circumstances the woman has had to endure over the years.

Ndokweni is one of the many physically disabled and terminally ill people who are not able to access wheelchairs in the Eastern Cape.

“I used to have a wheelchair, but it broke two years ago and my family has no means to replace it. Since then, I prefer to crawl on the ground to go to the toilet or when I’m washing dishes or doing other household chores. It used to be painful to crawl around as I used to develop blisters on my knees and hands, but now I’m used to it,” she said.

“I just can’t crawl all the way to the clinic. If I want to go to town, I have to crawl to catch a taxi. Sometimes taxi drivers have no patience and I have to hire transport whenever I want to go somewhere. All I want is a wheelchair. I have no problems with my hands as I can do household chores. I’m healthy, I just need help so that I can be able to move freely.”

Sipho Belesi, 68, can no longer walk unaided after his leg was amputated above the knee due to necrosis caused by circulation problems. He told DM168 that he had gone to Laetitia Bam Day Hospital in KwaNobuhle, Uitenhage, because he felt a numbness in his leg. He was transferred to Livingstone Hospital in Gqeberha (Port Elizabeth) for amputation.

“When I was discharged in hospital, they gave me walking aid, but I’m unable to use it. I borrowed a wheelchair from my neighbour, who was no longer using it. This wheelchair that I’m currently using is old and worn out. I don’t understand why the Department of Health cannot provide wheelchairs to persons with disabilities in time,” Belesi said.

“Patients have to wait several years for a wheelchair. I’m still waiting for the wheelchair that I ordered in 2019. When I went for a check-up, on 11 March, I was told that I’m still on the waiting list. I’m worried that unrealistically long waiting lists mean that by the time the wheelchair arrives it may no longer be the correct fit.”

Eighty-one-year-old Mary Dokwana is also in desperate need of a wheelchair as the pain of arthritis in both her knees prevents her from walking.

“I used to walk normally but, recently, it has become a daily struggle. The pain became unbearable and it got worse the older I got. I have had to accept that I won’t be able to walk again, and that is the most painful experience ever. More especially to me because I used to do my house things on my own, but now l depend on my grandchildren for household tasks such as cooking, bathing and cleaning.

“My life is stuck. It is difficult to leave my house because I can’t walk. I can’t go out and get fresh air. I’m always trapped in this house,” Dokwana said.

Thieves stole the wheelchair of Christina Gxathi, 81, who now has to depend on a walking stick to get around.

“My wheelchair was taken in front of my house last year. Having my wheelchair stolen is a big blow. I don’t understand people who take from needy people. Without the wheelchair, getting around independently is difficult. I cannot walk far without it and I’m still shocked. I completely lost my independence after my wheelchair was stolen.”

Mobility may be in sight for Eunice Ndokweni, Sipho Belesi and Mary Dokwana if the plans announced in the budget policy speech by Nomakhosazana Meth, the new Eastern Cape Health MEC, are implemented.

On Thursday, Meth announced that the province had managed to distribute 848 wheelchairs in the previous financial year, but this would be increased by another 700 through a donation by the charity arm of the Church of Jesus Christ of Latter Day Saints.

This donation would also be used to procure 1,200 walking aids, she said, adding that the department also planned to establish six wheelchair repair workshops across the province. DM168