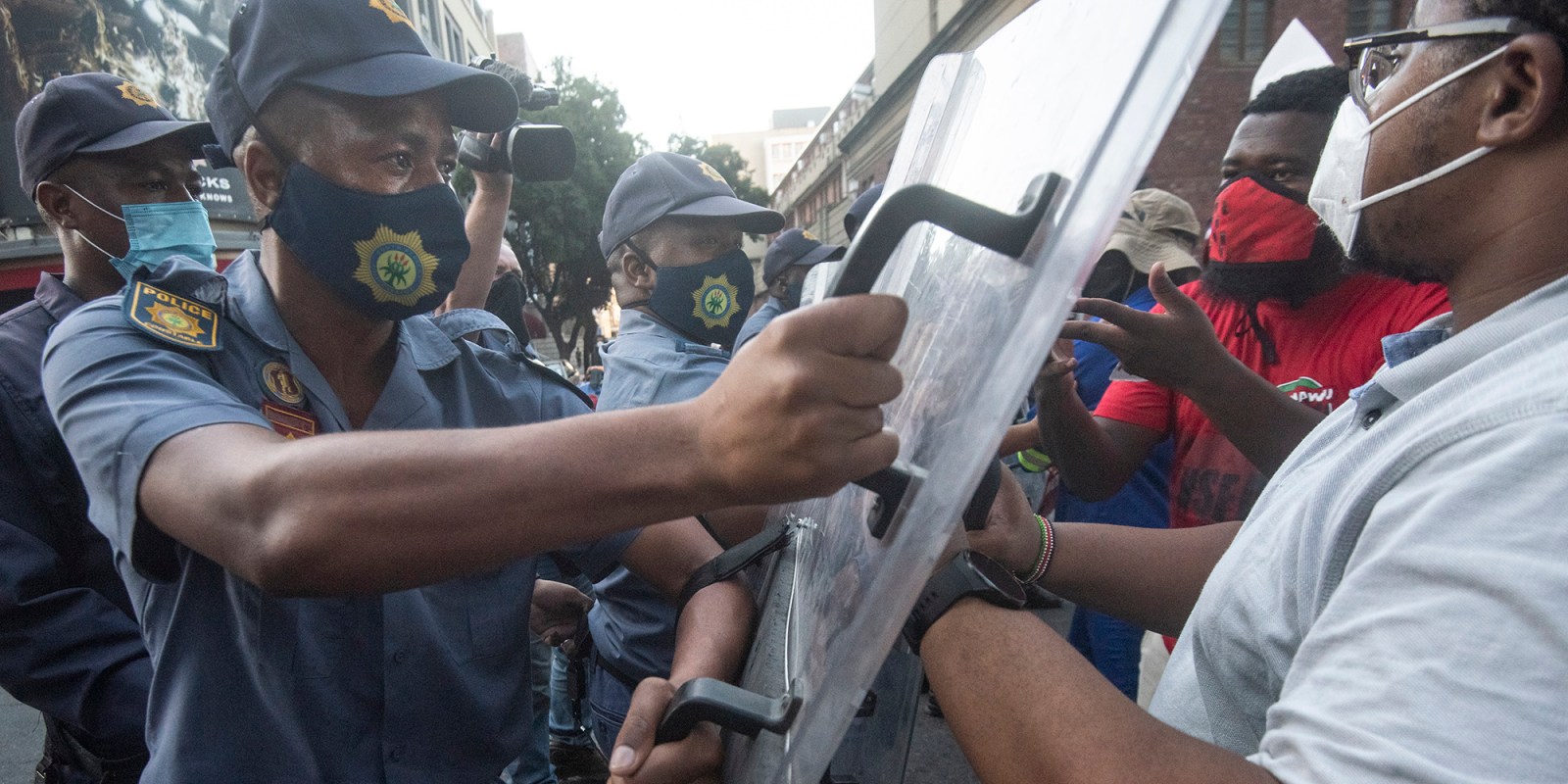 The violent police response to ongoing student protests is a sobering reminder of how the brutalisation of activists across the country persists. The perpetrators are rarely held to account. It has, for example, been five years since Bazooka Radebe’s murder and no arrests have been made.

When #BlackLivesMatter gained global support, millions of protesters in the US, at the height of a pandemic, made history when they marched against the unlawful killing of black people by state police. Equally as momentous was the police’s response. Police brutality, the use of excessive force and unlawful arrests ensued at the protests, once again bringing to the fore the kind of repression faced by activists.

Hailed as a country with one of the best constitutions in the world, South Africa’s constitutional democracy should be a vibrant one where activism, freedom of expression and the quest to advance one’s rights and freedoms are protected and encouraged. Instead, our constitutional democracy – founded on the principle of public participation, which includes the freedom to express dissent – is being threatened by the continued victimisation of activists by private and public bodies.

For many years after the transition to democracy, activists have continued to face mounting hostility from repositories of power. Hardly anyone will need to be reminded that in August 2012, at least 34 mine workers were gunned down by police during a protest against Lonmin’s Marikana platinum mine.

In 2015 and 2016, dozens of students were injured, arrested, suspended and faced disciplinary action for taking part in the nationwide #FeesMustFall protests. Also in 2016, Bazooka Radebe – leader of the Amadiba Crisis Committee opposed to the mining of titanium on local land in Xolobeni on the Wild Coast – was shot eight times outside his home and died.

In October 2020, Mam’ Fikile Ntshangase of the Mfolozi Community Environmental Justice Organisation, who was fighting against the expansion of the Tendele coal mine, was shot dead in her home.

And on 10 March 2021, a bystander was shot dead by police during a protest against financial exclusion at Wits University in Braamfontein. Five days later a student was reportedly shot and wounded during another student protest in Johannesburg.

These are a small sample of the countless cases of intimidation and violence against activists. Organisations such as the Centre for Applied Legal Studies and the Right2Protest Project represent and assist dozens of activists who are unlawfully arrested, unfairly criminalised, harassed, threatened and intimidated merely for trying to exercise their constitutional rights and those of their communities. The widespread failure to hold to account the perpetrators of violence against activists further fuels the crisis of activist repression in South Africa.

The International Covenant on Civil and Political Rights, which binds South Africa, makes it clear that the state has to protect the inherent right to life for all human beings. This includes activists.

Article 9(1) of the covenant further prohibits the arbitrary arrest and detention of people, a popular modus operandi of perpetrators of activist repression. Private actors such as corporations are also complicit in the victimisation of those who dissent. The United Nations Guiding Principles on Business and Human Rights call on businesses to respect human rights and address any adverse human rights impacts with which they may be involved.

In addition to South Africa’s obligations under international law, our own Constitution provides for the protection of a range of rights and freedoms that are pivotal to the work of an activist. These include the rights to freedom of expression and peaceful assembly in sections 16 and 17. Furthermore, in section 12, everyone has the right to freedom and security of person, which includes the right ­not to be deprived of freedom arbitrarily or without just cause, as well as the right to be free from all sources of violence from both public and private sources.

Despite these international and national obligations, violence against activists continues while the perpetrators are rarely held to account. It has, for instance, been five years since Bazooka Radebe’s murder and no arrests have been made. The response to the ongoing student protests is also a sobering reminder of how the brutalisation of activists across the country persists – apparently unabated.

The state is under an obligation to ensure that it protects activists against victimisation and that it promotes the plurality of voices in society as an important aspect of a participatory democracy. Activism allows the voice of the people to be heard, it guards against injustices and demands accountability from those with power. These are critical for the achievement of social justice, inclusion and the promotion of an equal society.

It is time for the state to recognise that the repression of activists in South Africa has reached crisis mode. Measures have to be put in place to ensure that engagements between activists and repositories of power remain open, transparent and nonviolent.

Furthermore, similar to the sentiments shared by the #BlackLivesMatter movement, the urgent need to reform the police has become indispensable. DM

Busisiwe Kamolane is the research coordinator at the Centre for Applied Legal Studies based at Wits University.