Jacob Zuma, Donald Trump, Beyoncé, Busi and the mystery of the number four 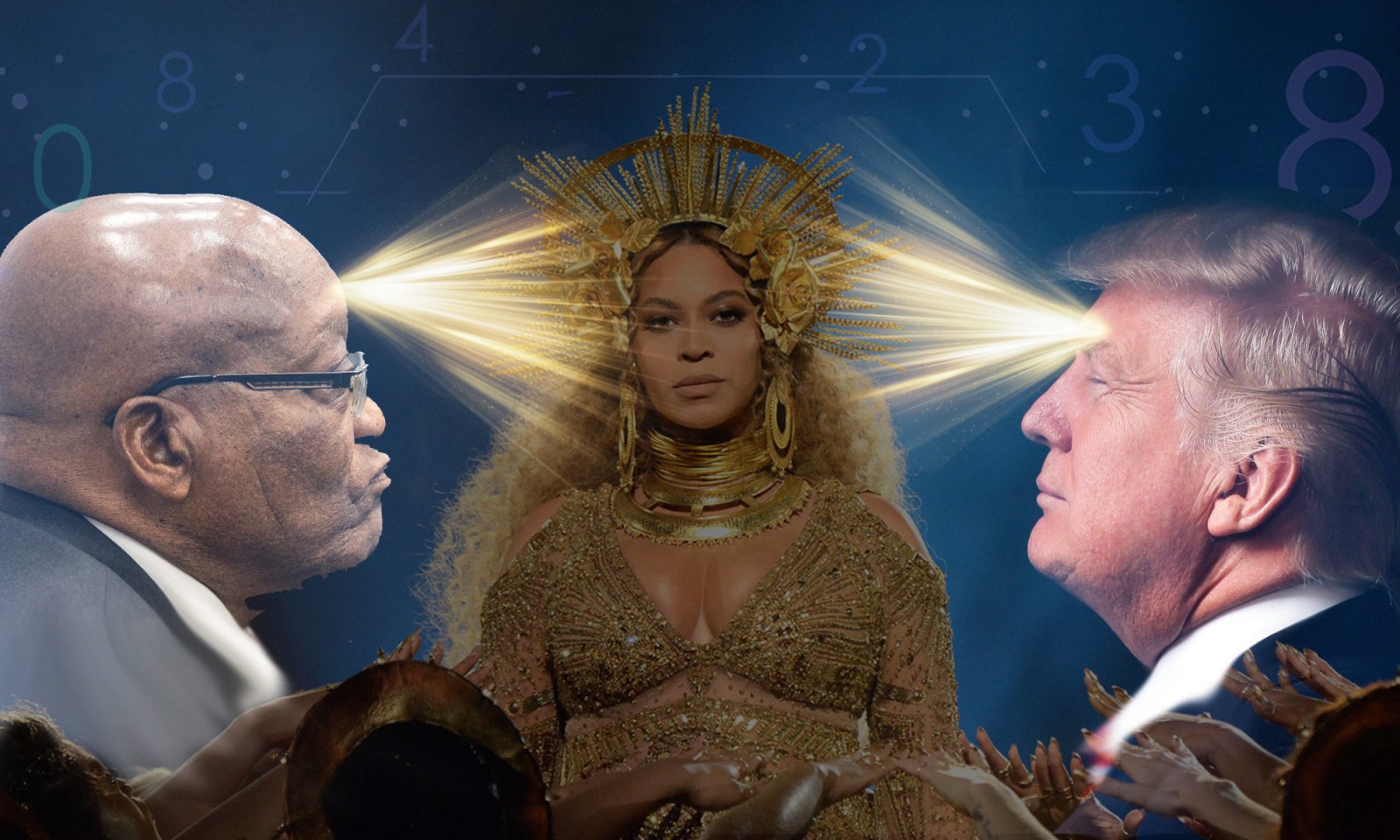 I was blown away. This information resonated with me deeply. I swear I felt it in my waters. I immediately felt a deep spiritual urge to share it with kindred spirits on Twitter.

Hear me out, I’m recently psychic

For those who may not know, I have recently been called to practice numerology. After all, these are challenging times for journalists. That said, I’ve always known that I have something of a psychic connection in me. In fact, I always thought the ancestors would call and I would go the sangoma route. Alas, no calls from beyond, not even a voice note. Thankfully, just as I was starting to feel like a psychic reject, the call to numerology came to me in what you might call “a spectacularly presidential fashion”.

As a rule, I absolutely do not read or watch the news, ever! That, dear reader, is how I maintain my sunny disposition and allegiance to “rainbownationism”. Some say ignorance is bliss, I say understatement of the century; only the truly and wilfully ignorant can know real happiness, and I am happy AF.

Anyway, I digress, I was about to tell you about the exact moment I was called to practise what I call Numerology 4.0, which is slightly different from the old traditional pre-Y2K stuff. As usual, I was doing a bit of spiritual reading on the website Refinery 29. It was an article about the number four and one of the great spiritual leaders of our time, Beyoncé, who also happens to be one of my four spirit guides, alongside Lil’ Kim, Gwyneth Paltrow, and Sis’ Busi Mkhwebane.

It read thus: “The numeral has been an invisible hand guiding her through life. She was born on September 4, and Jay Z was born on December 4. Their daughter’s middle name is Ivy, after the Roman numeral four. And that number is tattooed on both Bey and Jay’s hands, as a wedding-ring alternative. Good things come in fours for Bey.”

I was blown away. This information resonated with me deeply. I swear I felt it in my waters. I immediately felt a deep spiritual urge to share it with kindred spirits on Twitter. I opened the app, but it had been a while since I’d done my weekly deep cleanse on my timeline; you know, to unfollow those peace-snatching newsy types. You know them, the terminally grumpy wokey talkies who never miss a headline or attempt breakfast before writing a 10-tweet thread.

Two of these overinformed unhappy souls had contaminated my Twitter timeline with … news. One was a piece about beloved ex-president Jacob Gedleyihlekisa Zuma refusing to go to some party, hosted by something called the Zondo Collective or something. Good for him, I thought, he gets it, he gets physical distancing, he always has. There are few homesteads in this country that offer the kind of physical and mental distance that Nkandla offers. Hence Jules needed a heli to pop in for that piping hot tea. Teach us your ways, Jacob. By the way, Jules, if you’re reading this, please be a hun and respond to my letter.

The other tweeted headline was about another beloved former leader, Donald John Trump. I believe his grateful followers have made a stunning gold idol in his likeness. This thing was gorgeous. The guy who made the Nelson Mandela statue at that square in Sandton could learn a thing or four about contemporary sculptural practice from that. For a few seconds, I thought: maybe checking out the news once in a while is not so bad after all. The world seems to be in a really great place. These two former presidents were making it an even better place from beyond their presidential terms; one adored and his likeness adorned in gold, and another leading the physical distancing movement by example. I couldn’t help but imagine if Jacob were still in office when the corona panasonic hit. This could have been a really fruitful time for a few more. Oh well.

In that moment of deep Zumaphoric Trumpian spiritual joy, things got epiphanic real quick. It was as though lightning struck. My calling to Numerology 4.0 was revealed. I swear I heard the queen of the number four, Beyoncé, speak to me non-verbally from the fourth dimension. In a nanosecond, nay, a quadrosecond, I understood why these two tweets had been brought to my attention, and why they had given me so much joy.

Are you sitting down? This is gonna blow your effing mind!!!

Both Jacob Gedleyihlekisa Zuma and Donald John Trump were born in the 1940s, four years apart from each other: Zuma in 1942, in April, the fourth month of the year, Trump in 1946, on 14 June, and he served a single term of four years and he was the 45th president of the US. Zuma was the fourth president of South Africa, and prior to that he was Deputy President from 14 June 1999 to 14 June 2005.

Are you seeing what I’m seeing?

But wait, there’s more, much more!

The Book of Revelations, chapter 4, verse 4, reads thus: “Around the throne were 24 thrones, and seated on the thrones were 24 elders, clothed in white garments, with golden crowns on their heads.”

Q, are you listening? Actually, I know my #QAnon peeps are listening; and if I may address you directly, fam.

I know y’all been holding on to the number 17 because Q is the 17th letter of the alphabet. I just wanna say you guys are definitely on to something, because, guess what? 1 + 7 = 8, and 8 divided by two equals what? BOOM!

How’s that for ex-presidential Numerology 4.0?

Come to think of it, these superspreaders of misery who do so under the cloak of journalism used to call themselves the Fourth Estate. It makes total sense then that it would be those aligned with the number four who would fight their fakery and reclaim the number four and the truth, and in doing so, offer the world alternative facts.

So much makes sense now in my personal universe of personal truths. In a world whose joy has been stolen by far too much news, a new incarnation of leaders like the lifetime leaders of old have come to us to shift our attention in a different direction, away from peace-snatching facts, to the land of bliss.

This duo may have come and gone. As with many prophets before them, they were chased out of town before they could finish their work. But, thankfully, a seed has been planted, and they have left many a disciple in the governments they once led.