A letter to Julius: What’s the tea? 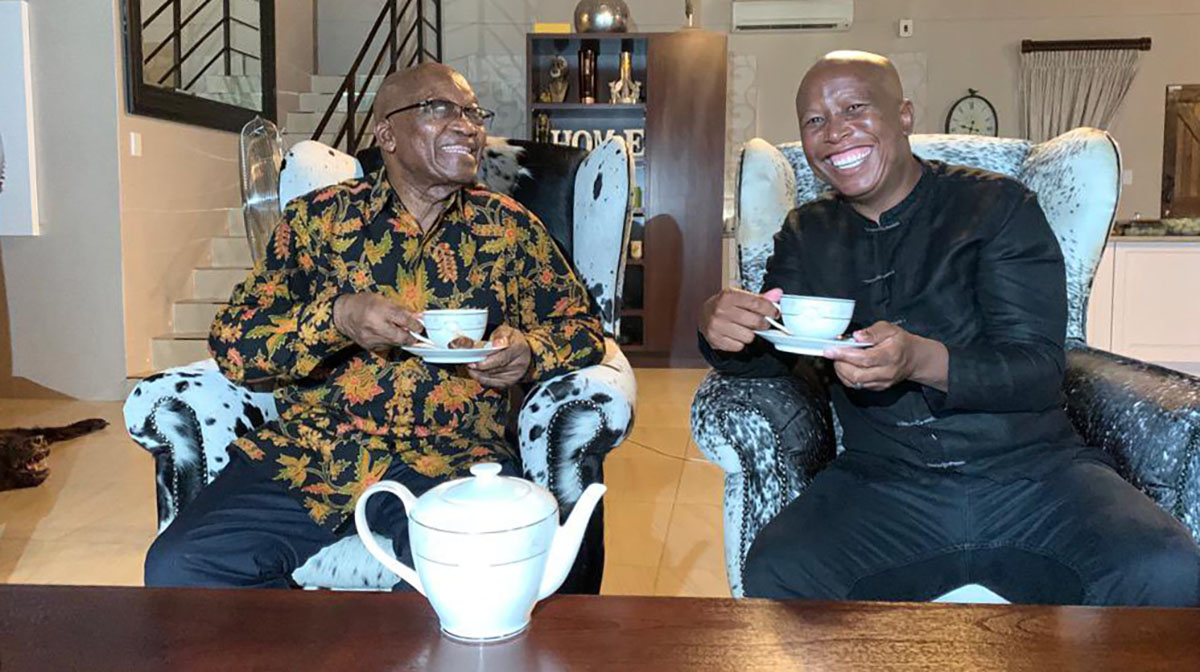 ‘From Zondo to the ConCourt to the voters, I imagine there was much to laugh about.’

“tea: the best kind of gossip, typically shared between friends. It’s a bonding tool for people of all ages. Tea is usually about someone you know, but can also extend to celebrities, random internet scandals, etc.” – urbandictionary.com

I trust this email finds you well. Sorry to spam, but after rereading the one-sentence email that I sent to you on Thursday, the one with the tea recommendation, I realised that it was far too brief. In the excitement of the moment I sent it off too quickly without explaining my thinking. No wonder you didn’t respond. It’s obviously too late now for the recommendation (which I still hope you took. Please say you did), but I thought it best to drop you another email anyway, to explain my thinking.

First, congratulations on the “tea” sesh. When I saw the video of you stepping out of that helicopter at Nkandla, and into those black SUVs towards the homestead, I was like… #goals. For a moment, the country felt less unequal, like anything is possible. You’re amazing, and watching you fight for your personal economic freedom over the past few years has been nothing short of inspiring.

I was so happy to hear via EFF spokesperson Vuyani Pambo that “the meeting went well”. Although I must admit that I was a bit worried when he said, “The tea was nice and sweet and very hot.” I do hope he was using the word “tea” the way drag queens use it, to mean “the gossip was nice and sweet and very hot”. In which case, tell him Yassss Kween for me.

But, in the case that he was speaking in an actual cishet dialect, I have to express my concern for the former president’s well-being. As we all know, sugar is basically the new tobacco, IT IS SOOOOOOO BAD FOR YOU. I recall that just a year ago he couldn’t make it to court because he was diagnosed with a terrible medical condition described by his doctor on his sick note as “Medical Condition”. Knowing what we now know about sugar, there really is no medical condition that is not aggravated by sugar, especially “Medical Condition.”

I must confess that when you took time away from your busy schedule of fighting for personal economic freedom last week, and publicly invited yourself for tea at the former president’s home via Twitter, that great platform where the highest quality conversation takes place, I was beyond excited. Unlike the rest of the homogenous body known as Media, who started sweating over their keyboards, rushing to be the first to analyse and speculate on the meaning of the upcoming tea, I was most concerned about the actual hot beverage you’d be drinking.

Like… I was seriously shocked that not a single one of these chatterboxes had bothered to contemplate what tea our hairless fearless leaders might drink at this the highest of high teas. Hence I took it upon myself to send you that recommendation. And, as I said in my previous email, this being an event arranged on Twitter, with definitely no prior arrangements, never mind what Stephen says, I felt the choice of tea should reflect its progressive nature. It should’ve been a progressive tea, a tea of the times, a tea that would start the meeting off on a high note: namely, cannabis tea.

Much has gone on over the past few years between you two. A peace pipe is needed, but considering the harm smoke imposes on one’s lungs, best to drink our kush I say, a peace pot if you will.

I really do hope you took my recommendations, that you two embraced the calmness the holy herb provides, and that you two old buds enjoyed the finest bud and giggled the day away. From Zondo to the ConCourt to the voters, I imagine there was much to laugh about. You probably had a lot to catch up on as well.

Please don’t take what I’m about to say the wrong way. But I have to tell you that many of us watched in disappointment when you went through your rebellious phase, when you went from being prepared to die for Papa Z to demanding he “pay back the money”. And the way you interrupted the grown-ups in Parliament!

Papa is a kind and generous man who is ever so keen to spread the love, aggressively even. I have no doubt he forgave you. After all, every young man has to break away at some point and chart his own path, secure his own bag, $tack hi$ own paper, a$ it were. Was it not Jesus himself who told us in the Gospel of Matthew 10:35 “For I have come to ‘set a man against his father, a daughter against her mother, and a daughter-in-law against her mother-in-law’.” And again in Luke  12:51-53:“Do you suppose that I came to give peace on earth? I tell you, not at all, but rather division… Father will be divided against son and son against father.”

I suppose the last few years have been nothing more than the fulfilment of the lord’s prophecy. So I’m letting bygones be bygones. After all, these are different times, peaceful times, and honestly Jules, you’ve gathered a lot of your own experience over the years, had your own challenges, and your financial affairs have come under the scrutiny of the same agents as those who would chase Pops. Perhaps now you’ll be able to show a bit more empathy to your elders and trust that they know what is best. Maybe Papa Z can advise you on how best to fight the smear campaign against you… you know, that VBS mess about you and your fam receiving all those millions stolen from poor South Africans… blah blah blah. A luta continua, my fighter.

I must say though that while I respect your brilliantly strategic mind, I was kinda disappointed that this meeting was off-camera, especially considering that it had been publicly arranged on Twitter with definitely no prior communication between you two, never mind what Stephen says. It would have been so, so, so great to bring the public in on the tea, as it were.

… I haven’t given up hope. I suspect you recorded and are in the process of negotiating broadcast rights and payments and such, maybe with Netflix? Last-minute helicopter rides ain’t cheap, and YouTube ads don’t pay much.

Papa Z could have brought in the crew that shot his genre-defying YouTube show, the reality TV-cum-talkshow series, Zooming with the Zumas. Better yet, he could have brought in a top-level moderator. Yes, I’m talking about that gorgeous hunk of a man with a walk so sexy it erases sin and rewrites narratives, Duduzane Zuma. The dry-eyed emotional range he displayed in Zooming with the Zumas, while interviewing his father about the family’s more traumatic moments! Wow! Oprah-esque. I must add that Dudu’s undying commitment to 2010’s fauxhawk haircut is nothing short of a masterclass in consistency. And that is the kind of moderator we would need to turn this high tea into high TV.

But I haven’t given up hope. I suspect you recorded and are in the process of negotiating broadcast rights and payments and such, maybe with Netflix? Last-minute helicopter rides ain’t cheap, and YouTube ads don’t pay much.

Anyway, I’m going to leave you be; I know you’re very busy, man. If I may ask just one favour, that you drop me an email and let me know what tea you went with. I just have to know and I promise I won’t tell. Since you invited yourself, I assume you brought the tea? I’m not sure what the correct etiquette is for high teas organised on Twitter with definitely no prior arrangement, never mind what Stephen says.

But if you brought the tea, and God forbid, you didn’t take my recommendation, I hope that at least it wasn’t one of these new-fangled super fruity teas. I think he would have preferred a strong traditional brew, or at the fruitiest, a strong rooibos. He’s man’s man! Remember that time in 2006 at the Heritage Day celebrations in KwaDukuza, when he said “When I was growing up, unqingili [a homosexual] would not have stood in front of me. I would knock him out.”

Now I can’t speak for all gaykind, but some of us (jk, just me) are partial to a fruity cuppa tea, gossip as well, but in this case I’m literally referring to a hot bev. I wouldn’t want the fearless leader and aggressive lover of the female form to think that you fraternise with us lot. Typically, the homophobia would bother me, but this tea is a matter of national importance, and I’ve learnt to put personal feelings, morals, and principles aside in the interest of expediency, just as you have demonstrated many times over, my leader.

Wishing you many more safe helicopter flights to many more high teas.

Long may you secure the bag.

PS: Please forward me the details of your helicopter guy. You wouldn’t believe what a mission it is to get the guys I normally use to come through on short notice. So annoying, ugh. DM/ML

The dietary fat debate rages on