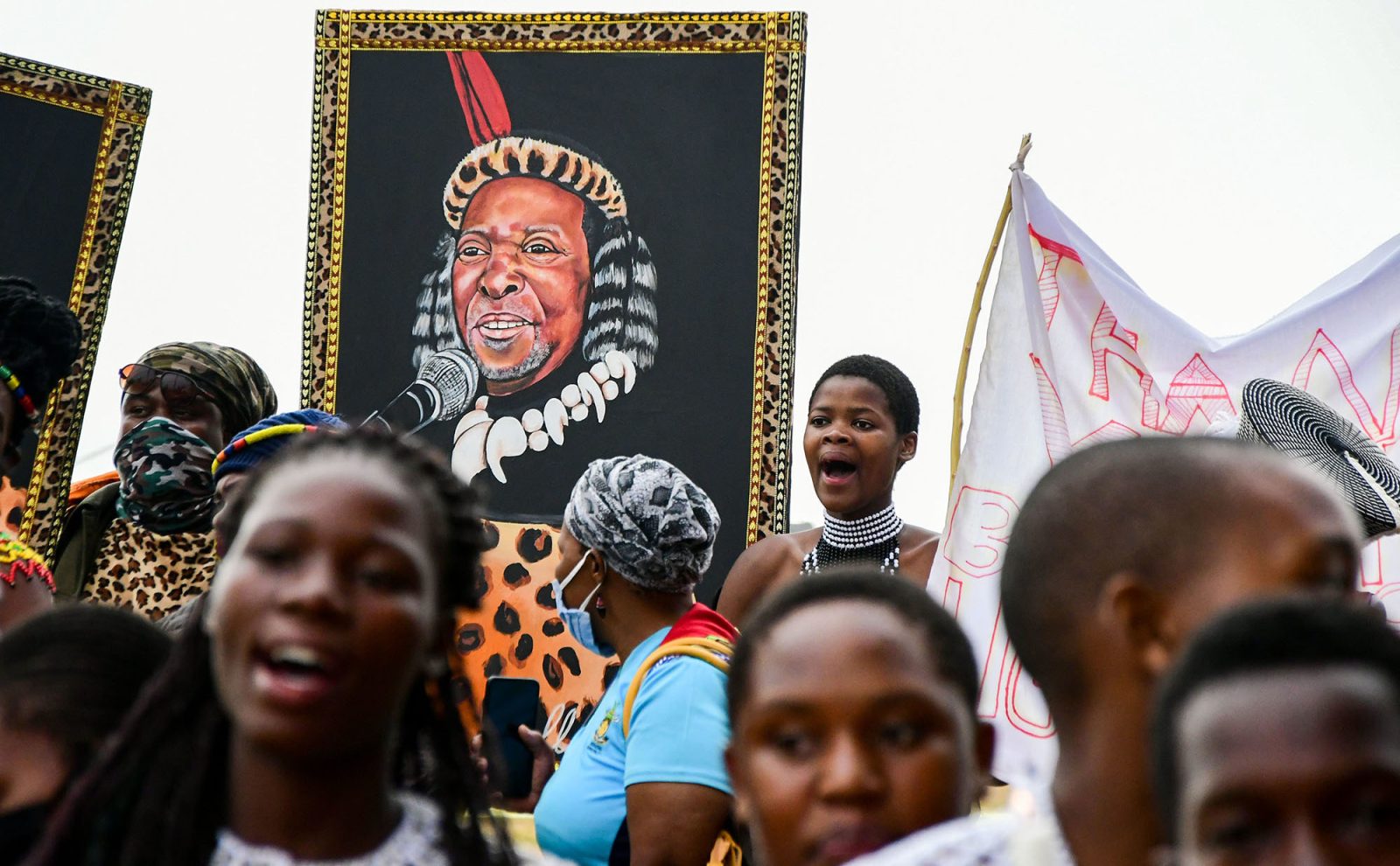 General view at the memorial service of King Goodwill Zwelithini KaBhekuzulu on March 18, 2021 in Nongoma, South Africa. It is reported that the late King was accorded a Special Official Funeral Category 1 funeral with military honours. (Photo by Gallo Images/Darren Stewart)

What could have been a sombre occasion became a celebration of the life and legacy of Zulu King Goodwill Zwelithini kaBhekuZulu. His official memorial service was held on Thursday. Prior to this, the King was ‘planted’ buried in the early hours of the morning by close male family members at a secret location.

The Zulu nation’s longest-reigning monarch, King Goodwill Zwelithini kaBhekuzulu was given a celebratory send-off during an official memorial service on Thursday morning at Kwakhethomthandayo Royal Palace in Nongoma, KwaZulu-Natal.

President Cyril Ramaphosa, who delivered the eulogy, described Zwelithini as a “repository of Zulu customs and tradition” who defended and advanced the interests of his people.

“It was with the heaviest of hearts that we received the news last week that our beloved leader and king had, after a courageous struggle, succumbed to the deadly disease that has taken the lives of so many people,” he said.

The king passed away on Friday, 12 March from a Covid-19-related illness at Inkosi Albert Luthuli Central Hospital in Durban.

Zwelithini served the Zulu nation, the country’s largest cultural group, for nearly 50 years, a milestone that would have been celebrated on 3 December 2021.

The ceremony drew large crowds who gathered outside the palace to pay their respects. Maidens and amabutho (Zulu warriors) clad in traditional attire sang and danced as the king was honoured in a short service led by prince Qedi Zulu and Cooperative Governance and Traditional Affairs minister Nkosazana Dlamini-Zuma.

The memorial, held under a large marquee, was limited to 100 people as per Covid-19 protocols and included dignitaries, politicians and members of the royal house.

Concerns were raised that the memorial could become a super spreader event. While masks were worn and social distancing was adhered to inside the marquee, outside, many were seen flouting protocols.

National Health minister Zweli Mkhize, who spoke to eNCA before the ceremony, said the government and royal house were doing their best to manage the situation.

“The most difficult part was the fact [that the ceremony] was not an organised event where people are invited. People just rocked up at the royal palace,” he added.

The gravity of the occasion led Eskom to suspend load shedding for four hours to allow the nation to witness the memorial.

Prince Mangosuthu Buthelezi, the traditional prime minister to the Zulu nation, said Zwelithini was a true leader who fought for freedom and social justice. He also praised his efforts in the fight against HIV/Aids in KwaZulu-Natal. He re-introduced male circumcision (an old Zulu custom) to curb the spread of the virus.

“His reign saw no wars. No warriors were sent into battle. Yet he reigned through one of the most turbulent times in our nation’s history,” said Buthelezi.

The king’s sister, Princess Thembi Ndlovu, urged the royal family and the nation to uphold his legacy of peace and called her brother a “man of courage”.

Zwelithini was a direct descendent of King Shaka kaSenzangakhona, the founder of the Zulu nation. He was affectionately referred to as iSilo Samabandla onke, (loosely translated as the ‘king of all Zulu kings’). He was coronated in 1971 at the age of 23 years old.

Zikalala, who gave a short tribute, called the monarch a custodian for peace who fostered unity across party lines.

Ahead of the memorial, the king was ‘planted’ (buried) in the early hours of Thursday morning during a private ceremony attended by close male family members.

The term ‘planting’ is used because according to Zulu beliefs, the King does not die but returns in the form of a spirit to guide and protect the Zulu nation and royal family.

The site where the king is planted is also a closely guarded secret. This is partly to prevent sorcerers or witches from interfering with the king’s grave.

On Wednesday, scores of amabhutho, maidens and members of the public braved the rainy weather to accompany the King’s body to Kwakhethomthandayo royal palace after it was fetched from a mortuary in Nongoma.

Traditionally, the King would have been laid in state to allow mourners to pay their respects, but this was not done as a precaution against Covid-19.

The name of the king’s successor is also being kept a secret, though Buthelezi announced on Tuesday that the King’s will would be read in private after the memorial service. It is unclear whether his successor’s name is contained in the will, and the process of selecting the new king is shrouded in secrecy.

Since Friday, gifts, including heads of cattle (a sacred commodity to the Zulu nation) have been delivered to Kwakhethomthandayo palace.

The memorial ended off with an Anglican church service led by the Archbishop of Cape Town, Thabo Makgoba. DM