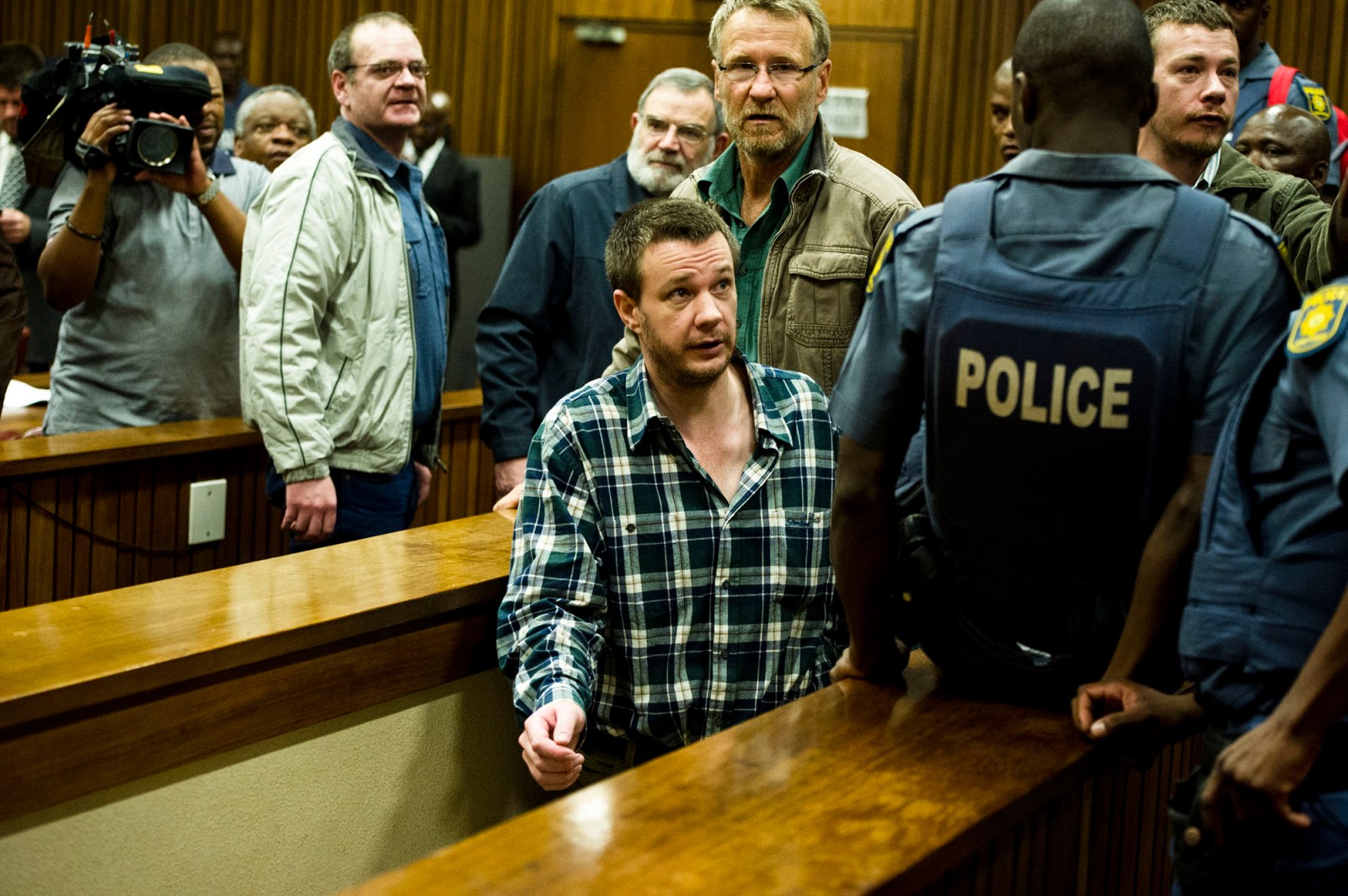 Boeremag members leave the North Gauteng High Court on October 29, 2013, in Pretoria, South Africa. The members of the Boeremag were convicted of high treason and given jail terms between 5 and 30 years. (Photo by Gallo Images / Foto24 / Theana Breugem)

South Africa has the highest number of prisoners in Africa and the 12th-highest globally. More than 16,000 prisoners are serving life sentences, according to the 2020 annual report by the inspecting judge of prisons, Justice Edwin Cameron.

Despite turning down an application by one of the Boeremag trialists to allow conjugal visits with his wife, North Gauteng High Court Judge Jody Kollapen said his ruling “may not necessarily be the last word on the subject”.

The prisoner was not identified in papers before court, but was described as a 41-year-old man currently serving a sentence for treason. It is understood that he is one of the Boeremag trialists.

The man is being held at the Zonderwater Correctional Centre in Tshwane, a maximum security facility for offenders serving lengthy sentences as well as those convicted of very serious crimes.

The prisoner was allowed to marry in 2017 and was also given permission to father a child through artificial insemination.

He and other members of the Boeremag, a right-wing Afrikaner organisation involved in sabotage, are serving an effective 25 years’ imprisonment for treason for their involvement in a campaign to blow up several targets in Soweto in 2002. They were sentenced in 2013 after a trial that lasted more than a decade.

He approached the high court to ask that he be allowed to have conjugal visits with his wife. He also wanted permission to have a cellphone and to have more visits in prison, during which he would be allowed to sit close enough to his wife to hold her hand.

Kollapen turned down most of his demands, including the one for conjugal visits.

South Africa has the highest number of prisoners in Africa and the 12th-highest globally. More than 6,000 prisoners are serving life sentences, according to the 2020 annual report by the inspecting judge of prisons, Justice Edwin Cameron.

Kollapen added in his judgment that though the current law and the interpretation of the Constitution did not allow for conjugal visits in prison, he did not believe this was “the last word on the matter”.

“The matter of conjugal visits remains an important issue and has complex policy and legal implications,” Kollapen said.

“Ordinarily, many personal and intimate human relationships are characterised by a physical closeness and sexual intimacy is often, though not always, a vital part of those relationships. It is said that such intimacy and the physical connection between people often adds value and quality [to] such relationships.

“On the other hand, there are many personal and intimate relationships that exist and thrive without the need for any physical intimacy or sexual connection. The complexity of the human condition and the diverse range of human relationships and interaction simply mean that there is not a single model that fits all.”

He said that although prisoners are allowed and encouraged to keep up contact with family members, this did not extend to conjugal visits.

“Much has been written and said on the matter [of] whether prisoners should enjoy conjugal visits and there are many who argue with great force and persuasion that if the object of imprisonment is not to punish but to create the conditions under which rehabilitation can meaningfully take place conjugal visits should be permitted… “On the other hand, it is argued that the deprivation of liberty that imprisonment necessarily entails has as its consequence that for those whose freedom is curtailed they of necessity give up much of what is associated with that freedom. Included in that is what may be regarded as a normal family life and a normal relationship with their spouse or partner.

“At other levels, the debate around conjugal visits in prisons implicates a host of other related and relevant issues and they include the commitment to equality for all within the penal system, the recognition of human dignity and the physical, logistical and other challenges such a shift in policy would create. The recognition of gender equality and given that the large majority of prisoners are male and heterosexual, how their partners may feel about such a change in policy may also be relevant,” the judge said in his ruling. “Coupled with that, the issues of consent, patriarchy and the significant imbalance in power relations between men and women which still characterise our society all become relevant considerations in the debate about conjugal visits.

“These issues all become relevant in how society is to approach such a matter and make a determination thereof if it is called upon to do so.

“It does appear that it is in nature a matter that is largely a policy choice that would ultimately require a consideration of a number of factors and the views from a number of stakeholders.

“It is hardly a matter that courts are necessarily well suited or well equipped to determine given the nature of and the wide-ranging interests and stakeholders who are relevant in such a process.”

The United Nations Standard Minimum Rules for the Treatment of Prisoners (known as the Nelson Mandela Rules) state that prisoners must be allowed to “communicate” with family and friends either through correspondence or visits and “where conjugal visits are allowed, this right shall be applied without discrimination, and women prisoners shall be able to exercise this right on an equal basis with men”.