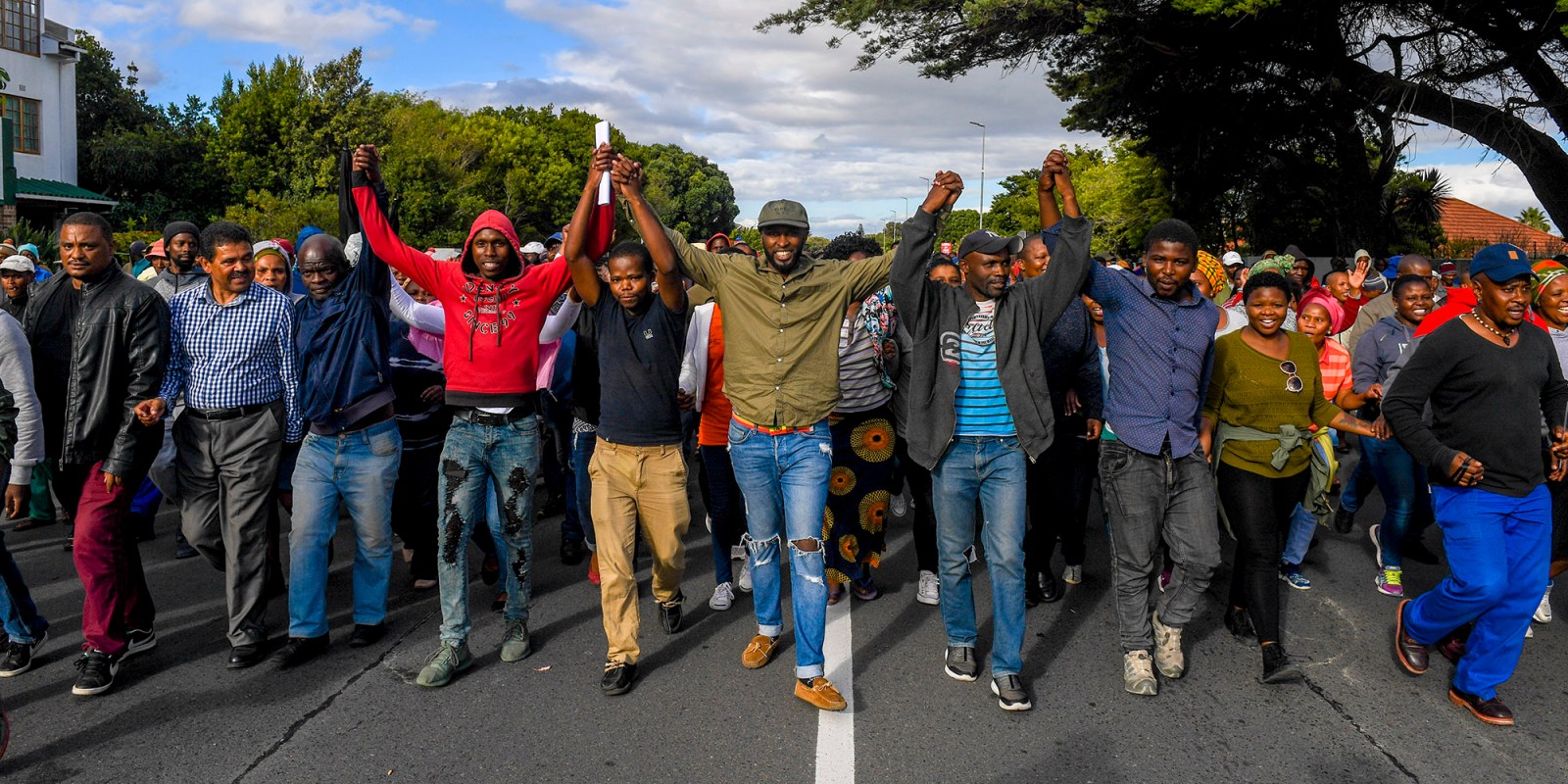 Hundreds of people from the Zwelihle community in the Cape march to the Hermanus Magistrates' Court in support of fellow community members arrested for public violence during ‘land grab’ protests on 10 April 2018. (Photo: Gallo Images / Netwerk24 / Jaco Marais)

The Democratic Alliance has objected to a column in Daily Maverick by Ismail Lagardien. This is its reply.

South Africa’s housing laws are some of the most humane in the world. The duty to provide shelter and access to housing isn’t just a matter of responsible government, it is a justiciable right in the Constitution. Nobody can be evicted from their home without a court order, and in deciding eviction applications the court has to consider a number of factors that seek to tilt the balance in favour of vulnerable people.

Constitutional jurisprudence has gone further, establishing a duty on the part of the state to provide alternative accommodation to people who have been evicted from their homes. It is only fair that such a duty should fall to the state, the only party capable of levying rates and taxes to fund the progressive rollout of socioeconomic rights (whether municipalities get sufficient support from national government for this purpose is a different debate).

It made sense for government to include additional safeguards during the levels of hard lockdown, including a moratorium on evictions. But as lockdown restrictions on free movement and economic activity were gradually eased, the additional restrictions on evictions should also have been eased. Unless, of course, the government could help property owners whose rights have been deprived due to illegal occupation.

But no such government help was ever offered. And despite now being at Level 1 lockdown, current regulations still make it unusually difficult for ordinary property owners to succeed with any application to restore lawful possession of land and buildings. This includes fighting back against outright land grabs, even those orchestrated by criminal syndicates whose intention it is to charge their own rents in place of the deposed landlord.

The factors that a court has to take into account in deciding eviction applications according to regulation 73(2) stack the cards against ordinary property owners who don’t have money to litigate on a grand scale.

Before deciding to grant any application for eviction or destruction of an unlawfully erected structure, the applicant – normally an aggrieved property owner or long-term lessee – has to show inter alia that the person who stands to be evicted has immediate access to an alternative place of residence and basic services.

The regulations offer no clear and corresponding recourse in the applicant’s favour to compel the state to provide immediate access to alternative accommodation. The court may require a report from “the responsible member of the executive regarding the availability of emergency accommodation or quarantine or isolation facilities.”

But as lockdown regulations have been eased, many of these facilities have been closed. And so, what if the government’s answer is simply: there is no alternative accommodation immediately available? Even if an ordinary property owner can afford to litigate at this level of complexity, the risk is that many courts will simply refuse to grant eviction orders.

When it comes to hastily drafted disaster management regulations, deferring to the government’s interpretation is the path of least judicial resistance – even an interpretation that helps the government dodge its constitutional duties. And while we wait for the minister (and not the scientific) determination of when the Covid-19 national state of disaster will be over, the door for land grabs is left wide open.

This is why the Democratic Alliance (DA) asked for the Regulation 73(2) to be lifted under Alert Level 1, so that courts could revert to the far clearer eviction laws that compel them to consider individual circumstances (and all the other safeguards already built into our law). At the very least, the restriction on property rights must match the level of restrictions of movement and economic activity.

When I raised this issue in a member’s statement in the National Assembly this week, the Minister of Cooperative Governance and Traditional Affairs, Nkosazana Dlamini Zuma, made no effort to explain the reasoning behind the regulation. In fact, it’s not clear that the minister or her deputy were even logged into the parliamentary sitting.

Stepping into the breach was Daily Maverick opinion writer Ismail Lagardien, no laggard when it comes to picking up stompies to throw at the DA. In a piece published on 11 March (“Sense of humanity: If you’re not angered by the callousness of the DA, nothing will anger you”) Lagardien makes the dishonest and bizarre insinuation that the DA wouldn’t want eviction orders to be granted against whites.

Dishonest, because the DA never insisted that anyone be evicted, least of all on the basis of race. Bizarre, because Lagardien seems to imply that black South Africans don’t have an interest in a minimum level of legal protection afforded to people whose savings or livelihoods, or both, are invested in property.

The truth is that black South Africans are property owners and landlords too. In fact, by 2015, 52% of the value of SA’s residential property market was owned by black people. Regardless of race, letting out a room often helps first-time homeowners to cover their bond (a large percentage of rental property is bonded). Far from landlordism, this is a way of joining the middle class or simply making a living after retirement.

If our country shapes into the society envisaged by our Constitution, the number and the diversity of property owners will continue to grow. Asking for reasonable protection of ownership rights – and that government doesn’t transfer its tax-funded constitutional duties to ordinary property owners – is a matter of common interest to all South Africans. DM