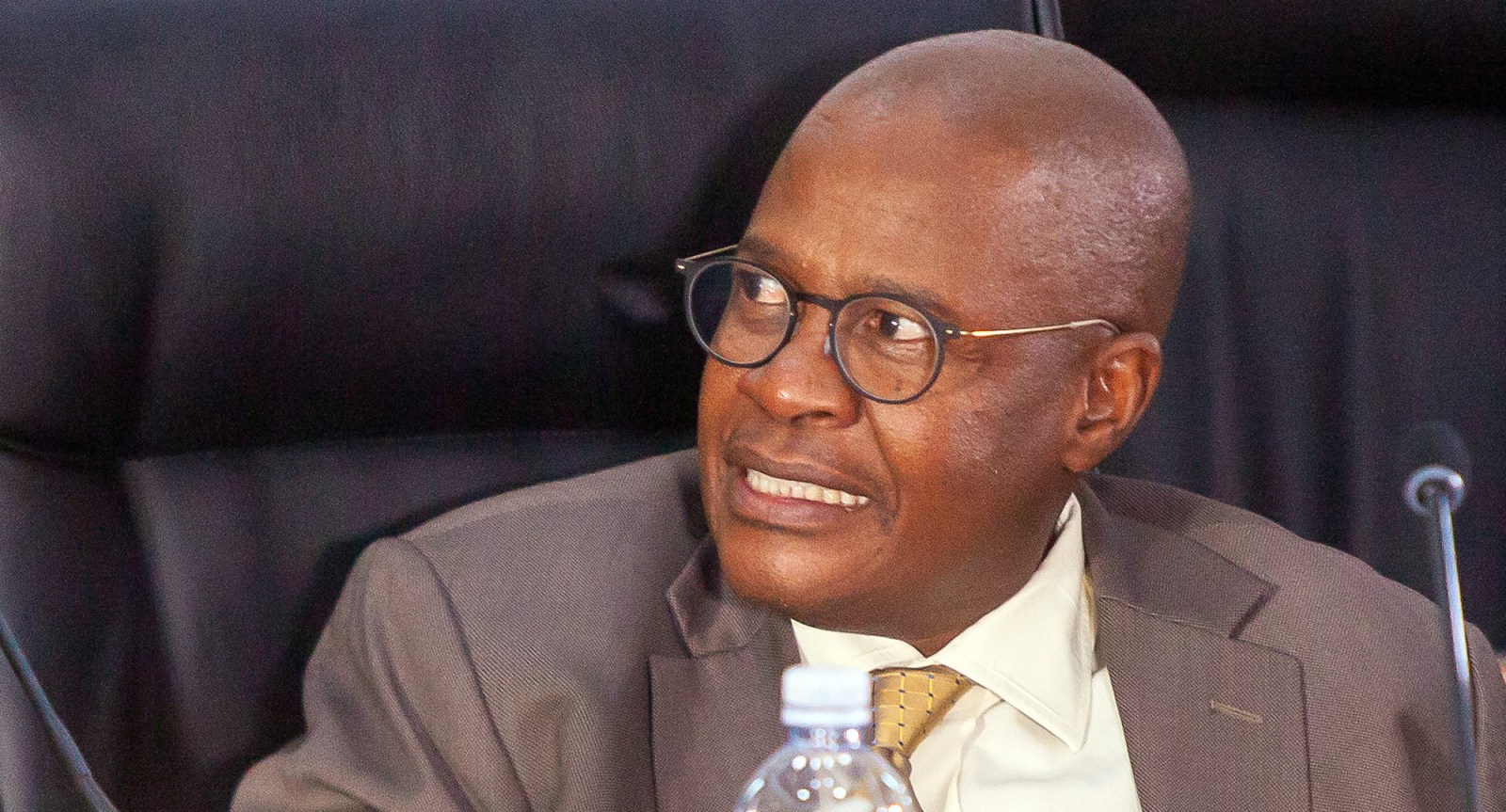 In his two days at the State Capture Commission, Brian Molefe described himself as an exemplary leader who was maligned for taking on Glencore and Cyril Ramaphosa. He intimated there was no smoking gun over allegations that he benefited his friends, the Guptas, but evidence shows that the Guptas benefited handsomely from his time at Eskom.

Brian Molefe’s emotional exit from Eskom after revelations about his cosy relationship with the Gupta family is old news. But when the former Eskom CEO appeared at the State Capture Commission in January and claimed President Cyril Ramaphosa and Glencore collaborated to extort Eskom, it was both shocking and familiar.

The mining giant Glencore is hardly known for its altruism. Ramaphosa’s lucrative career in business and his partnerships with large corporates will always raise questions in a country that has been exploited by big business and politicians working in concert.

“Mr Ramaphosa was their bet. The profitability of Optimum was therefore dependent on the pedalling (sic) of political influence,” reads Molefe’s opening statement to the State Capture Commission when he first appeared earlier in 2021.

Ramaphosa was Glencore’s local empowerment partner in 2012 when the group took a controlling stake in Optimum Coal Holdings (OCH). Glencore’s company, Piruto, took a 67% stake in OCH and Ramaphosa’s company Lexshell took about 9%.

Whether Ramaphosa became Optimum chair was a point of debate at the commission, but it was widely reported in 2012 that he was elected chairperson, succeeding Bobby Godsell.

At the time, Glencore announced: “Optimum will add to our coal presence in South Africa and will be highly complementary to our joint venture [with] Shanduka Coal and our investment in Umcebo. South Africa is an important producer to supply the growing Chinese and Indian markets, so we are delighted to add to our business in the country with our partner Cyril Ramaphosa.”

Molefe, who tried to balance his degrees of blame, had vaguely accused the president of attempting to influence Eskom’s negotiations with Optimum in 2015 while the company tried to secure a coal price to cover its costs. Ramaphosa, who was deputy president at the time, led the government’s Eskom “war room”, established to oversee efforts to avert load shedding.

Molefe admitted on Tuesday that his claims about Ramaphosa were mere speculation.

The commission heard that President Ramaphosa plans to respond to Molefe’s accusations only after he finishes his testimony.

Glencore has issued a statement saying Ramaphosa divested his interest in Optimum in 2014 and had no interest in the company’s negotiations with Eskom the following year. Neither Molefe nor any other witnesses have presented evidence to show Ramaphosa interfered with the negotiations.

Molefe often appeared in control during his two days of testimony this week. Evidence leader advocate Pule Seleka struggled to pin him down on the core issues, which come down to his refusal to engage Optimum on its attempts to increase the price of the coal it sold to Eskom.

After he was seconded to Eskom from Transnet, Molefe essentially ended negotiations with Optimum about increasing the price per ton it was charging for coal to supply the Hendrina Power Station. While he testified that he acted in the country’s best interests, he has admitted his justifications were mostly based on principle.

Molefe had dealt with Optimum when he was CEO at Transnet in 2014. The company refused to sign a rail agreement with Transnet, like all other miners, according to Molefe, while it was working out its grievances with Eskom. When he arrived at Eskom in 2015 and saw Optimum wanted to increase its Hendrina coal price, Molefe believed the company was playing both SOEs to get the best deal from each.

When Glencore bought Optimum in 2012 it didn’t do its due diligence on the contract it had to supply coal at R150 per ton. It was making a loss and proposed raising the price, first to R530 and then to R442 per ton. Eskom officials and independent experts, after looking at Optimum’s finances, suggested the power utility pay the raised price, but Molefe intervened and ended negotiations.

Optimum also owed around R2-billion in penalties and Molefe said he refused to let that slide. He never took the same position on Tegeta after it purchased Optimum, claiming he didn’t know that company had failed to deliver on its contract.

Molefe said he refused to agree to a new coal price with Optimum because Glencore was one of the mining companies — large, white-owned — that had bullied Eskom and benefited from favourable deals for years.

He might have been right, but there was no pragmatism in his principle — Eskom’s own officials and independent experts, who knew the story far better than the new CEO, had already said it would benefit Eskom if it agreed to an increased price.

Nevertheless, Molefe ended negotiations with Optimum, arguing that the company had to stick to its agreed coal price of R150.

The former Eskom CEO repeatedly referred to the problem of white-owned companies taking advantage of Eskom and the need to diversify suppliers to increase competition and lower the price of primary energy, but all he and his fellow executives, particularly Anoj Singh and Matshela Koko, did was ensure the Guptas took control of Optimum through their company Tegeta.

“You are pinning me on Tegeta at all costs, even when I tell you I was in hospital,” Molefe told Seleka.

Molefe was hospitalised in December 2015 when Eskom executives misled the board to fund a prepayment of R1.68-billion to Optimum, only to modify it the next day to support a guarantee to the Gupta family’s Tegeta for the same amount.

Board members have told the commission they had no idea their decision would be used to support Tegeta, just as they said they didn’t believe Molefe even had the mandate to end discussions with Optimum about increasing its coal price.

The commission has heard that ANC leaders Zweli Mkhize, Jessie Duarte and Gwede Mantashe have all written under oath that former president Jacob Zuma wanted Molefe to become finance minister as Zuma was looking to replace Pravin Gordhan.

Molefe might have been in hospital when Eskom essentially decided to fund the R1.68-billion the Guptas needed to buy Optimum, but he is suspected to have been part of the set-up.

Eskom executives approached the Department of Mineral Resources (DMR) on the supposed coal crisis related to Hendrina and other power stations in early December 2015, and finding a response to their inquiries already in his inbox, former DMR director-general Dr Thibedi Ramontja simply signed the letter, which was used as justification for Tegeta’s prepayment.

Seleka put it to Molefe that there was no crisis at Hendrina. In September 2015, Optimum agreed to supply the power station at R150 per ton and that deal lasted until mid-2016. He suggested Molefe and his colleagues had exaggerated the crisis so that Tegeta would get its prepayment. Molefe strenuously denied he had anything to do with the DMR correspondence.

Molefe’s hard line on Optimum was a key reason the Guptas were able to buy Tegeta, with an eventual R659-million prepayment from Eskom, but the former CEO relied on plausible deniability whenever he was questioned about directly trying to benefit his friends.

His denials, however, don’t seem plausible.

In the Public Protector report that landed Molefe in this mess, Thuli Madonsela wrote “there appears to be a clear line of communication between Mr Molefe, the Gupta family, and directors of Tegeta (Ms Ragavan and Mr Howa). These communications were made during a critical period and cannot be ignored”.

Ronica Ragavan was CEO of the Gupta family’s Oakbay, which owned Tegeta. She called Molefe on 11 April 2016, the same day Eskom approved the prepayment to Tegeta, without which it could not have bought Optimum.

The Public Protector found that between 2 August 2015 and 2 March 2016 Molefe and Ajay Gupta shared 58 phone calls.

Molefe’s alleged allegiance with the Guptas didn’t end when he resigned as Eskom CEO in late 2016 with a plum retirement deal that is still in court.

He became an MP and went to the National Assembly for two months. Molefe said he agreed to the move because he was always ready to be a public servant when called upon, yet in the same testimony, he hyped his credentials as the saviour of the PIC when he led the institution, and Transnet, suggesting he believes he was always destined for higher office.

The commission has heard that ANC leaders Zweli Mkhize, Jessie Duarte and Gwede Mantashe have all written under oath that former president Jacob Zuma wanted Molefe to become finance minister as Zuma was looking to replace Pravin Gordhan.

Former deputy finance minister Mcebisi Jonas has said the Guptas had earmarked Molefe for finance minister. Molefe wasn’t appointed to the post and left Parliament after two months, returning briefly as Eskom head before once again leaving it after opposition to his return.

Molefe is due to return to the commission next week to testify on Transnet matters. His close colleague Anoj Singh was due to testify on Wednesday about his time at Eskom, but chairperson Deputy Chief Justice Raymond Zondo granted him leave after hearing his wife had recently had a Caesarean and needed his attention. DM