Cape Winelands: Firefighters battle the blaze for another day 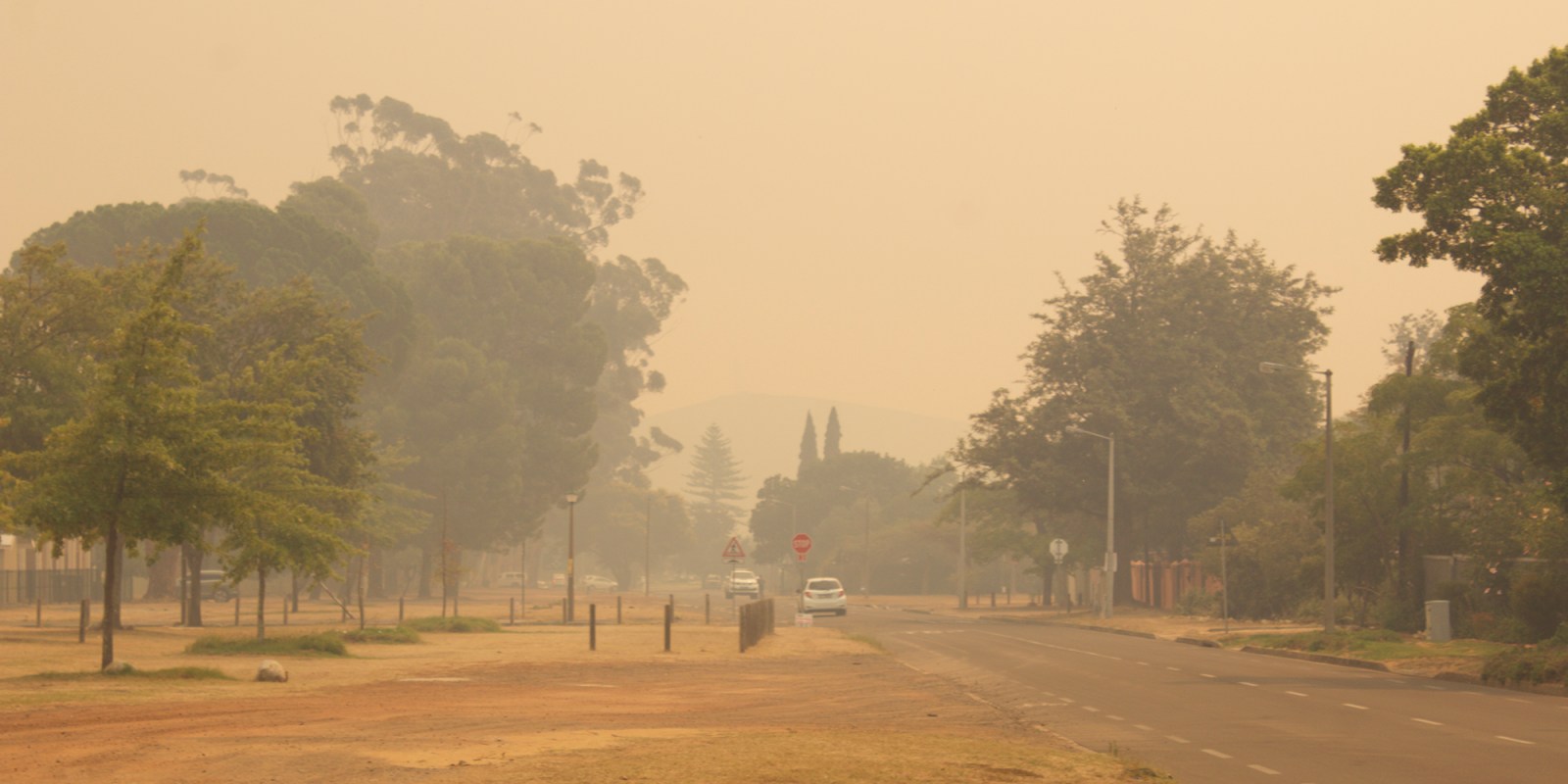 The stiff heat and howling southeaster are proving to make the fight to control the blaze challenging for the firefighters. (Photo: Rebecca Pitt)

At the peak of the fire season, a week-old runaway fire that originated in the Overberg Mountains continues to burn in the Cape Winelands. As firefighters work to bring the fire that has burnt 13,600 hectares to a halt, nearby residents fear for safety as flags are raised for the short fire-return interval.

Vicious, thick smog hovered over the Cape Winelands District Municipality for the greater part of last week. The air has been stiff with heat for the past week, but now and then the southeaster picks up. Usually, relieved locals would welcome a breeze in the scorching heat that February brings, but not amid a week-old wild fire gone loose.

Firefighters continue to battle a blaze that rages on in the peaks of Bothmaskop and Jonkershoek. At the time of publication, two firefighters had sustained serious injuries. No farmland or property had been damaged but an estimated 13,600 hectares had burnt.

The fire originated in the Overberg Mountains on 21 February, and spread to the Cape Winelands District, in the Banhoek Mountains outside Franschhoek by 22 February. In Stellenbosch Central, while firefighters managed to divert the flames from the R45 and farmland on 25 February, the fire had set a golden haze over the town’s skyline.

Overnight, the number of firefighters deployed to fight the flames – being fuelled by howling winds and mixed vegetation – rose from 60 to 107. The veld fire had crested the mountains and travelled into the  Jonkershoek Valley. By the afternoon of 26 February, the team increased to 236, and law enforcement officials were deployed to advise residents neighbouring the fire to be alert to potentially evacuating their properties. By Friday night a dense cloud had extended to the distance of the Kuils River area.

So far, into this fire season – which runs from November until late April – 857 fires have been recorded in the Cape Winelands District alone, according to Wayne Josias, acting Fire Chief for the district.

This veld fire comes at the peak of this fire season, he says.

The Cape Winelands District area’s mountainous terrain and old vegetation makes it a prime hotspot during this time, Josias says.

According to Professor Ben du Toit of Stellenbosch University’s Department of Forestry and Wood Science, this has been the third wildfire in the last 12 years in the region. He says mountain fynbos in the high rainfall areas should burn, on average, every nine to 10 years.

And while all biomes burn every five to 10 years, the fire-return interval is getting shorter and shorter, says Du Toit.

A major fire like this means that a combination of municipal and contracted firefighters are working ceaselessly during their 24-hour shifts. The fire has been burning for days and by Sunday was yet to be extinguished.

Teams of 12 attend to the blaze. Ground fire fighters and troopers – who are dropped from the helicopters into the mountain to fight the fire from higher ground – are trying to prevent the flames from moving to property or farmland; choppers and fire engines are all active, says Josias.

“When things are down and tough and, the [firefighters] have been there for long hours, day in and day out, they are still laser sharp when they are bringing this fire under control, because they know what the implications are for the community out there,” Josias says.

With strong winds and high temperatures, things can change very quickly. “You prepare for that,” he says.

Locals were watching as fire engines and law enforcement vehicles moved in and out of Jonkershoek Road when Daily Maverick visited the area just outside the Jonkershoek Plantation close to where the fire was burning, on 26 February.

Two neighbours, Shanelele Frans and Nadia Galant, could hear the sharp crackling of burning not far in the distance.

The two stood outside a home with a group of children, watching the activity outside. All were on high alert.

“We are very nervous, we don’t know what we must do. We can hear how the trees are burning,” said Galant.

A press statement, released later in the day by the district’s spokesperson, Jo-Anne Otto, said that residents neighbouring the plantation were relocated to a community hall in Cloetesville as a precaution. They returned home during the morning of 27 February.

Theo van Heerden, who lives in Simonsberg Road further down from the Jonkershoek region, said “it feels like you are living next to a volcano, the house is full of dust now.”

Local businesses and wine estates were also on the lookout.

“Some of our fynbos got torched and a tiny bit of grapes got hit during the fire,” Rüdger van Wyk, winemaker at the Stark-Condé wine estate in the Jonkershoek Valley told Daily Maverick on 27 February.

With these runaway fires the problem is not just the lives, property or assets lost, says Du Toit. “The problem is also that every time we get a wildfire, the fire burns right into the mineral soil. We are losing a lot of soil carbon, we are degrading our soil, we are rendering the whole landscape such that the land is very prone to soil erosion.”

“Instead, we want a lot of small, controlled fires that we burn every other year, so that we constantly reduce the fuel load,” Du Toit points out.

Constant fuel load reduction and proactive management is the name of the game, he maintains.

“Lots of little fires under controlled conditions, all the time, rather than waiting for the fuel loads to burn up on a very bad day and then we have a wild fire – then we have all these economic losses, plus a mad scramble to contain the fire,” he says.

In the mountainous regions, it follows that the only way to stop large-scale fires is to divide the area into smaller blocks and do fuel load reductions, in strategically placed buffer zones, says Du Toit.

“This has to be done in this region now, because every time we see the same problem,” he says.

Reducing the number of wildfires will also mean protecting the firefighters who work at the front of the fire lines.

“[Fire fighters] are prepared to give their all, all the time. We are also reminded that it is safety first at all times, even though this is what we are called to do: to protect,” says Josias.

“We also want to fight for another day.” DM