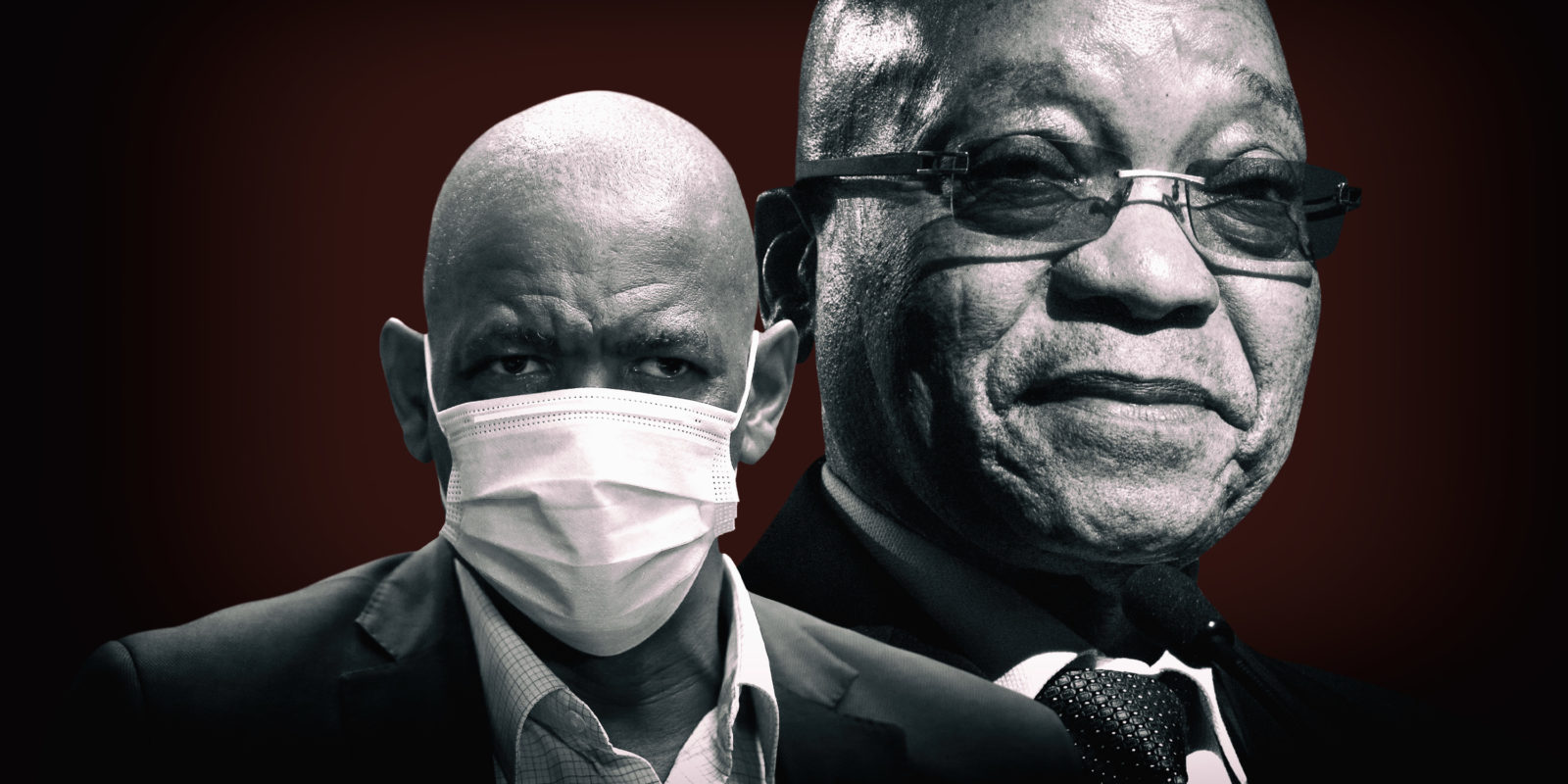 While these days both Ace Magashule and Jacob Zuma, and their supporters, give every impression of defiance against the ANC’s national executive committee (NEC), the sacking of the Eastern Cape Health MEC Sindiswa Gomba suggests the picture is becoming more complicated.

Magashule was in a defiant mood on Friday afternoon. Hours after his appearance in the Bloemfontein Magistrates’ Court on corruption charges, he gave a press conference when it emerged Covid-19 regulations made it impossible for him to address his supporters directly.

Magashule told reporters he would not step aside at this point, as the issue had to go to branches. When quizzed about whether he was now defying the ANC’s constitution by refusing to step aside, he asked a reporter to read out all of the points of the NEC’s step aside resolution, before saying that “words can be interpreted”.

It seems difficult to understand how so many people can have such different views over what is supposed to be a simple set of words:

“Cadres of the ANC who are formally charged with corruption or other serious crimes must immediately step aside from all leadership positions in the ANC, legislatures or other government structures pending the finalisation of their cases.”

Ramaphosa’s potential game changer? Only if there’s a strong follow-up

Now it appears that Magashule wants the entire process to go to branches, rather than for the NEC, to decide.

But this raises another question.

It was the branches, through their delegates at the ANC conference at Nasrec that decided to pass a resolution stating that the party must “summarily suspend people who fail to give an acceptable explanation or to voluntarily step down, while they face disciplinary, investigative or prosecutorial procedures”.

Now it would seem that Magashule, strangely, wants to go back to those same branches, which have already empowered the NEC to run the ANC between the national conferences.

He might feel that he has stronger support than people realise. While no provincial and regional breakdowns appear to be publicly available, it may be that Magashule’s supporters have been able to change the balance of power in the branches, or they may feel that they have. But this is also hard to know, given that there should not have been any physical branch meetings since the start of the pandemic. And how this would have been done is also hard to understand. Of course, some may feel that Magashule, using his position as secretary-general, has been able to cook the books of branches. But no one has offered any proof of this.

What appears to be the case is that Magashule is invoking branches as an ultimate play for time. Any such move will take time, and plenty of it. It would also work to his favour in that he can concentrate on branches while his main opponent, President Cyril Ramaphosa, is trying to govern the country.

But it is hard from this perspective to forecast how this would end, not with so many moving parts and like “black swan” events that are coming South Africa’s way. It does appear that there may soon be certain indications as to how some of these battles will play out. While Ramaphosa’s supporters may prefer a quick hearing and an equally quick finding on Magashule’s guilt or innocence, long delays could also mean that he could end up in court before, or even during, an ANC conference. This could well prevent him from campaigning, amid calls from some of his supporters to run for the office of ANC president.

Meanwhile, at least one of Magashule’s supporters has shown, again, that they do not respect the judiciary.

She said that “the best judiciary is a judiciary that listens to the people”. She also appeared to suggest that she had been right to insist that the company Cash Paymaster Services continue to pay out social grants despite the fact the Constitutional Court had ruled the decisions illegal. (For the most eye-popping account of what really happened, this piece by amaBhungane is illuminating.)

Then, the Sunday Times reported that after she had been ordered to pay some of the legal costs in the Constitutional Court litigation around the social grant payment system, Dlamini failed to do this. She said she could not make the payments because she was no longer a Cabinet minister.

While Magashule himself has not said that he would defy the court or the judicial process in any way, he does appear to be keeping interesting company.

Meanwhile, on Thursday the Eastern Cape Premier Oscar Mabuyane announced he was sacking Sindiswa Gomba from her position as Health MEC because she is facing criminal charges relating to claims that she was one of a group of people who tried to make money through the arrangements for Nelson Mandela’s funeral. The case had originally been dropped but was recently reinstated.

The Eastern Cape ANC had said Gomba would have until Sunday to decide whether to resign voluntarily, but it has been reported she stated she would not resign, and so he fired her.

Many might welcome what appears to be decisive leadership on the part of Mabuyane.

But it does lead to another question, which is how did someone accused of making money from the funeral of Mandela become appointed to the position of MEC in the first place? The answer would suggest that she has a strong constituency of some kind. Which means Mabuyane may have to be asked why he appointed her at all in 2019.

However, he has at least been able to set an important precedent. If and when other provincial and national officials are criminally charged, there will be more pressure on them and the people who appointed them to leave their positions.

In a strange sense, one of the indicators of the balance of power in the ANC may well turn out to be if the ANC’s top six national officials are able to convince Zuma to stop his defiance of the Constitutional Court and appear before the Zondo Commission.

While he has said he would not appear, the ANC’s consistent official support of the Zondo Commission suggests he may well run out of options. Certainly it would be impossible now for the ANC to withdraw its support of the commission. That also means anyone in the party who supports him publicly would be defying the NEC.

Zuma appears to be slowly running out of options. The stated deployment of Umkhonto weSizwe Military “Veterans” is now being reported on for its freak show imagery, rather than any sign of strength. As Ramaphosa and others reportedly tried to change his mind, his refusal may start to look stubborn and self-centred rather than principled.

Should Zuma be forced to testify, or arrested, it would be an important symbol that the rule of law, and the decisions of properly appointed judges, reigns supreme. This would make it harder for Magashule (and Dlamini and others) to fight against it. It would be a sign that perhaps there will be accountability for alleged wrongdoing, and that the state has the capacity to enforce its will. DM