I will go only if the premier says I must, says Eastern Cape MEC Sindiswa Gomba 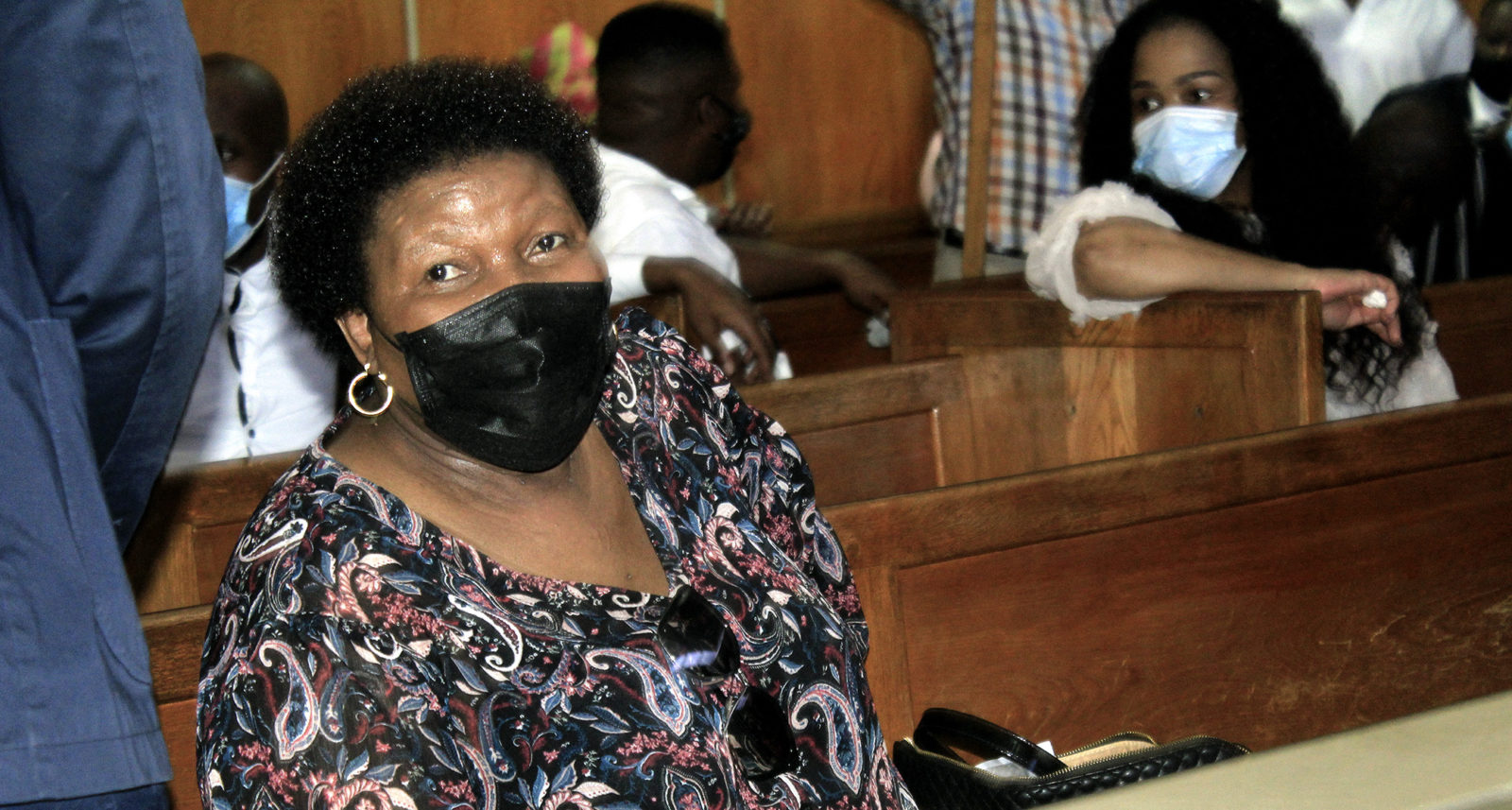 Despite being implicated in procurement irregularities in the acquisition of medical scooters for the province and being criminally charged with 14 others as part of a conspiracy to illegally obtain some of the funds earmarked for Nelson Mandela’s funeral, Eastern Cape Health MEC Sindiswa Gomba said on Monday that she would not voluntarily step down from her position.

Eastern Cape Health MEC Sindiswa Gomba will continue in her job until she is fired by Premier Oscar Mabuyane, her spokesperson Judy Ngoloyi said on Monday.

“The MEC, as a cadre and a deployee of the ANC, will rely on the decision by the ANC and through the premier in this case,” Ngoloyi said after being asked if the MEC plans to step down from her position “This matter is being handled by the ANC in the province and by the Office of the Premier and therefore the MEC is not able to comment,” she said.

Ngoloyi said the MEC considered the charges against her as well as the evidence before a Special Tribunal with regard to the medical scooters as sub judice and would not comment.

The scooters were controversially procured with Covid-19 funds, even though the decision to procure them was taken before the outbreak of the Covid-19 pandemic in December 2019. The vehicles were procured even though the provincial health department had not identified drivers for them. While the department denied it, the Special Investigating Unit (SIU) says the initial plan was to procure both mobile clinics and ambulances.

Referring to an upcoming hearing before the Special Tribunal where the Special Investigations Unit will apply for the cancellation of the scooter contract, Ngoloyi said: “Matters that are going to be ventilated in a court of law… we can’t comment on them. Safe to say this matter is sub judice and therefore prohibited from public discussion. Let’s not predict [what] the Tribunal [is going to do.]”

On Friday the National Prosecuting Authority reinstated charges against her and 14 others for allegedly looting funds from the Buffalo City Metro meant for the funeral of Nelson Mandela. Gomba was a councillor there at the time of Mandela’s death.

Following Mandela’s death on 5 December 2013, National Treasury authorised all municipalities to use municipal funds for transportation services and venue costs associated with memorial services for Mandela.

It is the state’s case that Gomba and three councillors used their positions and influence to set in motion a scheme designed to defraud the municipality and to misappropriate, for the benefit of party and personal interests, municipal funds earmarked for the transportation of mourners to venues where memorial services were to be held.

It is the state’s case that two senior officials in the metro had worked with Gomba and the councillors “with the intention to defraud and manipulate the procurement processes”.

According to a document detailing the background to the charges issued by the National Prosecuting Authority, the plan was, first, to mislead the Buffalo City Metro’s council into accepting that the metro should pay for the transportation of mourners to venues where memorial services were to be held.

It is further alleged that inflated and in some cases possibly fraudulent quotations were then submitted for the transportation of mourners. Contrary to Treasury instructions, a part of the municipal funding was allegedly used to pay for T-shirts and catering. The catering would have been included in the invoice submitted by the transportation company.

The NPA alleges that Gomba’s role was to ensure that the Buffalo City Metro’s council made funds available for the procurement of transportation services.

She and 11 others were provisionally charged on Friday with corruption, money laundering, fraud and contravention of the Municipal Finance Management Act.

They were all released by the East London Regional Court on R1,000 bail.

They were charged with Vazi and Mati’s respective companies, Forty Wings Lodge CC and Mpidos Emergence and Training CC. Another suspect, Dean William Fanoe, whose company, Mantella Trading 522 CC, will also be charged, did not appear in court as he is adhering to Covid 19 protocols.

In December 2014, businessman Mzwandile Sokwali and his company, Victory Ticket, who was the “winning bidder” in the scheme, pleaded guilty to fraud and money laundering after entering into a plea and sentence agreement with the state. He was fined R100,000, with R50,000 suspended, and sentenced to five years’ imprisonment wholly suspected for five years.

The matter was postponed to 5 March 2021 for the defence to obtain copies of the docket and for the rest of the suspects to appear in court.

On 22 April, the SIU is expected to apply for the cancellation of a contract with Fabkomp, a company manufacturing special medical scooters, after investigations found that there had been irregularities in the procurement process.

Premier Oscar Mabuyane’s spokesperson Mvusi Sicwetsha said on Monday that there would not be an answer yet from the premier on whether the MEC will be asked to step down. Mabuyane said on Friday that he was considering the situation.

Under normal circumstances, vehicles are procured through a contract with the provincial department of transport. The provincial treasury also refused a deviation for urgent procurement, but according to papers before the tribunal, emergency procurement procedures were forced through.

The case was also referred to the Hawks and a prosecutor to investigate possible criminal cases.

The SIU requested Premier Oscar Mabuyane to take action against two members of the “executive” in connection with the contract. It is understood that Gomba is one.

Evidence in the affidavit of SIU chief forensic investigator Glenn Muller describes how witnesses told him that Gomba had been actively involved in the procurement process and had made phone calls to senior health department officials “to speed up” the process and to berate them for blocking the procurement.

He said the first decision to procure motorcycle clinics and ambulances for the rural part of the province was taken in December 2019 in a meeting chaired by Gomba.

“Although this meeting dealt with an important departmental procurement, there were no minutes taken to record the discussions and resolutions. I have asked for a copy of the minutes from the department’s officials and I was informed that they did not exist,” he said.

Muller said another witness received a telephone call from the MEC, who told her that she (the MEC) had received a report that the witness was blocking the procurement of the motorcycles, ambulances and motorcycle clinics.

“She said that she responded by telling the MEC that she had not received any documentation relating to the procurement of the motorcycle ambulances and motorcycle clinics at that point. The MEC got aggrieved by the pace of the procurement and, on 3 April 2020, she lashed out at the official, retorting that the transaction needs to be sped up. The MEC then instructed her to proceed with the transaction using the five-day emergency procurement process,” Muller stated in his affidavit.

“The MEC who has no role in procurement matters, played an instrumental [part] in directing how the transaction should be handled,” Muller said, adding that the transaction was pushed through “hastily and inappropriately on the MEC’s instructions.”

Premier Oscar Mabuyane’s spokesperson Mvusi Sicwetsha said on Monday that there would not be an answer yet from the premier on whether the MEC will be asked to step down. Mabuyane said on Friday that he was considering the situation.

The leader of the Democratic Alliance in the Eastern Cape Legislature, Bobby Stevenson, said the premier must fire Gomba.

“No amount of noting developments and looking into the matter is going to change the fact that EC Health MEC, Sindiswa Gomba, is facing a string of charges including fraud, corruption, money laundering and contravening the Municipal Management Finance Act.

“Premier Mabuyane cannot call for people like Ace Magashule to step aside while in his own back yard he does not practise what he preaches. He cannot dither any longer. Gomba must go!

“The longer he takes to act, the more damage is being done to the name of the Eastern Cape, entrenching the view that this province is the epicentre of corruption.

“The premier is supposed to be the highest custodian of ethical values in government. His credibility, that of his government and party, the ANC, are entirely on the line.

“Mabuyane must not hold back, he must fire MEC Gomba, even if his party will not call for her to step aside,” Stevenson said. DM/MC