Civil society responds: Sona 2021 should have focused on strengthening the fundamentals 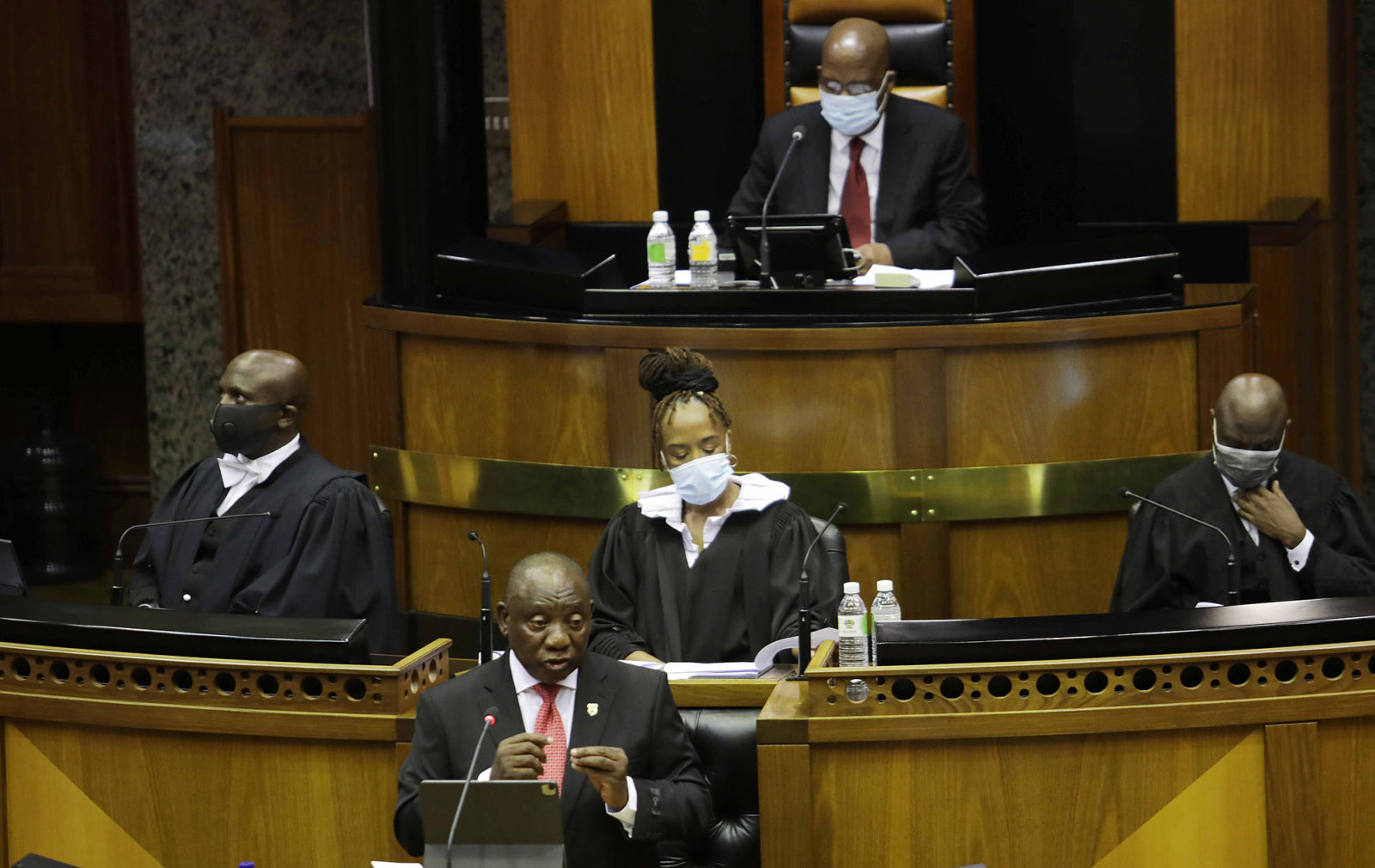 While we acknowledge the president’s statement that this Sona was more a progress report and less a promise of things to come, there are fundamental signals of government plans that the Sona should have issued.

Housing:  given the December 2020 announcement by the minister of human settlements of the downscaling of state-subsidised housing, we expected the president to signal how his administration would ensure that pro-poor housing obligations outlined in the NDP will be met. The Sona instead referred to emerging “smart city” developments. The recent policy shift by DHS appears to be a contradiction of the 2019 Sona promise in which the president committed to “accelerate provision of well-located housing and land to poor South Africans”.

Health: with limited public information pertaining to the Covid-19 vaccine, we expected the president to address key questions in the public domain including the mechanisms by which Cabinet will ensure rigour of procurement monitoring, parliamentary oversight and reporting by the Department of Health. We expected the president to clearly outline how similar corruption and maladministration as was revealed by the SIU in relation to Covid-19 emergency procurement will be avoided. Waiting until allegations of misdirected supply chain processes arise in order to put safeguards in place will not bolster accountability.

Environmental governance: there is abundant evidence that the suite of statutes promulgated in accordance with section 24 of the Constitution (the right to a healthy environment) has not yielded adequate environmental protection. This is attributable to a combination of factors: poor leadership of and inadequate professionalism within the institutions mandated to implement it, in addition to insufficient budget allocations. We’d have expected the president to commit to urgent rectification of this situation beyond mere reference to the green economy and climate change mitigation which – while important – are relatively meaningless in the absence of comprehensive action to address them.

The PSAM is encouraged by the president’s acknowledgement of the importance of addressing “planning and funding” in early childhood development and will seek commitment to this in the minister of basic education’s policy speech. We are also encouraged by developments in the process of professionalising the public service and look to engage the National School of government and DPSA in due course.

President Cyril Ramaphosa correctly identified bringing the coronavirus pandemic under control as the top priority for the government and everyone in South Africa. The most important intervention will be the equitable distribution of vaccines to everyone in this country, regardless of wealth or citizenship. It is only by ensuring that vaccination is available for all that we are collectively protected.

It is encouraging to hear that the first doses of the Johnson & Johnson vaccine are due in the country next week and that there will be 12 million doses of vaccines expected through the Covax facility. However, it is vital that the details of the cost of the vaccine programme are made public. Transparency on pricing and contracting is vital for the building of public trust. We expect that the minister of finance will provide greater detail on the funds that National Treasury will allocate for this programme and the plans for securing the required additional funding.

A glaring omission in the president’s address was the future of the National Health Insurance Bill. According to the draft bill tabled in Parliament in 2019, the NHI Fund is due to be set up by 2022. The legal framework to enable its establishment has not been enacted. South Africa has been awaiting a move towards universal health coverage for over a decade and the pandemic has demonstrated the importance of securing access to healthcare services for all. Decisive and bold leadership is needed from the public and private sectors to bring about equity in the health system.

It is deeply concerning that the president failed to provide detail on how the education sector will be supported in this time of crisis. The future of this country depends on ensuring that teaching and learning is restored. There is insufficient detail in the president’s speech to address the gaps in learning that this pandemic has caused. We expect to see more detail in the minister of finance’s speech in the next two weeks about how the government plans to fill the funding gaps left by the reprioritisation of funds last year away from critical infrastructure projects in education, as these have a direct impact on the safety of learners in schools.

We welcome the announcements of the statutory body to oversee the implementation of the government plans to deal with corruption. It is important to have the political will to eradicate corrupt behaviour in the public service and a crucial step in building a capable state.

The establishment of the GBV Response Fund is a welcome development. As the president noted, ending GBV is a whole society project and it is crucial that the private sector plays its part. It is encouraging that the government has committed R12-billion in the next three years to implementation of the National Strategic Plan.

We’d written an open letter talking to the president about this idea of the widening inequality gap inside the basic education system and put to him the live testimonies of learners reflecting on the types of issues they experienced in the 2020 year.

[#Sona2021] #DearMrPresident Anela, Western Cape Equaliser, Gr 10 expresses her hopes that @PresidencyZA @CyrilRamaphosa
will this evening address safety at schools, the lack of textbooks & the continuation of the NSNP.

[#Sona2021] #DearMrPresident “We would like to demand more classrooms since the schools are reopening & we will have to social distance, while our schools do not have enough classrooms.” – Betty, Limpopo Equaliser

[#Sona2021] #DearMrPresident “I would like you to invest more money in basic education so that schools can have their needs met.” – Gracious, Limpopo Equaliser, Gr 11

They expressed their general anxiety about going into a schooling environment that felt like teachers are anxious, therefore learners are anxious, and there’s a desperate need for people to play catch-up in order to finish the curriculum for the year. Learners were concerned about going back into that environment and we wanted the president to think carefully about supporting basic education and creating an equality in the reopening plans. We wanted a response to our open letter.

Many of our members were also looking forward to hearing a big announcement about the Basic Income Grant. Equal Education does cater to young learners in secondary schools, but we also have a massive contingent of post-school youth between the ages of 18 and 25 who are interested in the possibility of criteria and the objectives of the grant. There was an expectation we would get something solid about when the grant could be expected.

It’s concerning that there were about two sentences featuring basic education in the speech and it read something along the lines of, schools have lost time and need to go back and improve educational outcomes. This kind of language is neoliberal. This idea of foregrounding economic recovery, private enterprise, subsidies to business, economic rejuvenation and thinking about using the coffers of the wealthy and capital to bolster social programmes for a country’s eventual economic growth is worrying.

We don’t have state capacity to run some of these projects. It has been proven. We have 10 years under our belt as Equal Education asking for the eradication of pit latrines and we still have those as the only sanitation in some schools. We do have a corruption pandemic and it’s rife at all levels. There’s a worry about foregrounding that, as opposed to thinking about a deliberate investment in basic and public education. If we are interested in really building a solid democracy, then we must invest in the education of the largest population, the children of this country.

All of these enterprising ideas – smart technologies, the Fourth Industrial Revolution, tech hubs – all of these things also widen the inequality gap. Many of the schools Equal Education works in are struggling with things like computer labs and access to connectivity and data.

We recognise that the president has spoken about the minister’s performance contract. Our question is: how do we ensure that learners and the constituency that Angie Motshekga reports to can influence what sits on that performance contract? How do we inform it and how do we keep them accountable?

The mention of the need to make up days will make learners feel more uncertain. The idea of the catch-up period is worrying because we also know we should be anticipating a third wave and that some provinces are not ready to reopen on 15 February. I don’t understand when a good flow for teachers and learners is going to happen inside schools.

This idea that we need to recover time and improve learner outcomes is neoliberal – the school environment offers more than the ABCs for learners. We need to think about how we take learners and teachers back into an environment which is able to subsidise and safeguard against some of the harms they’ve experienced inside their communities as a result of the socioeconomic crises of the pandemic. It can also be a place where learners can learn about social and behavioural changes that can help them survive this moment. It can help them think about vaccination, which will be critical. We need an open conversation with learners about what curriculum trimming is going to look like. We also desperately need learning material support.

The Department of Basic Education has been losing budget for 10 years and last year lost R2-billion. For us, we’re concerned that the priorities of the government as a whole are leaving out basic education. We think that’s a fundamental flaw of any vibrant democracy. DM/MC