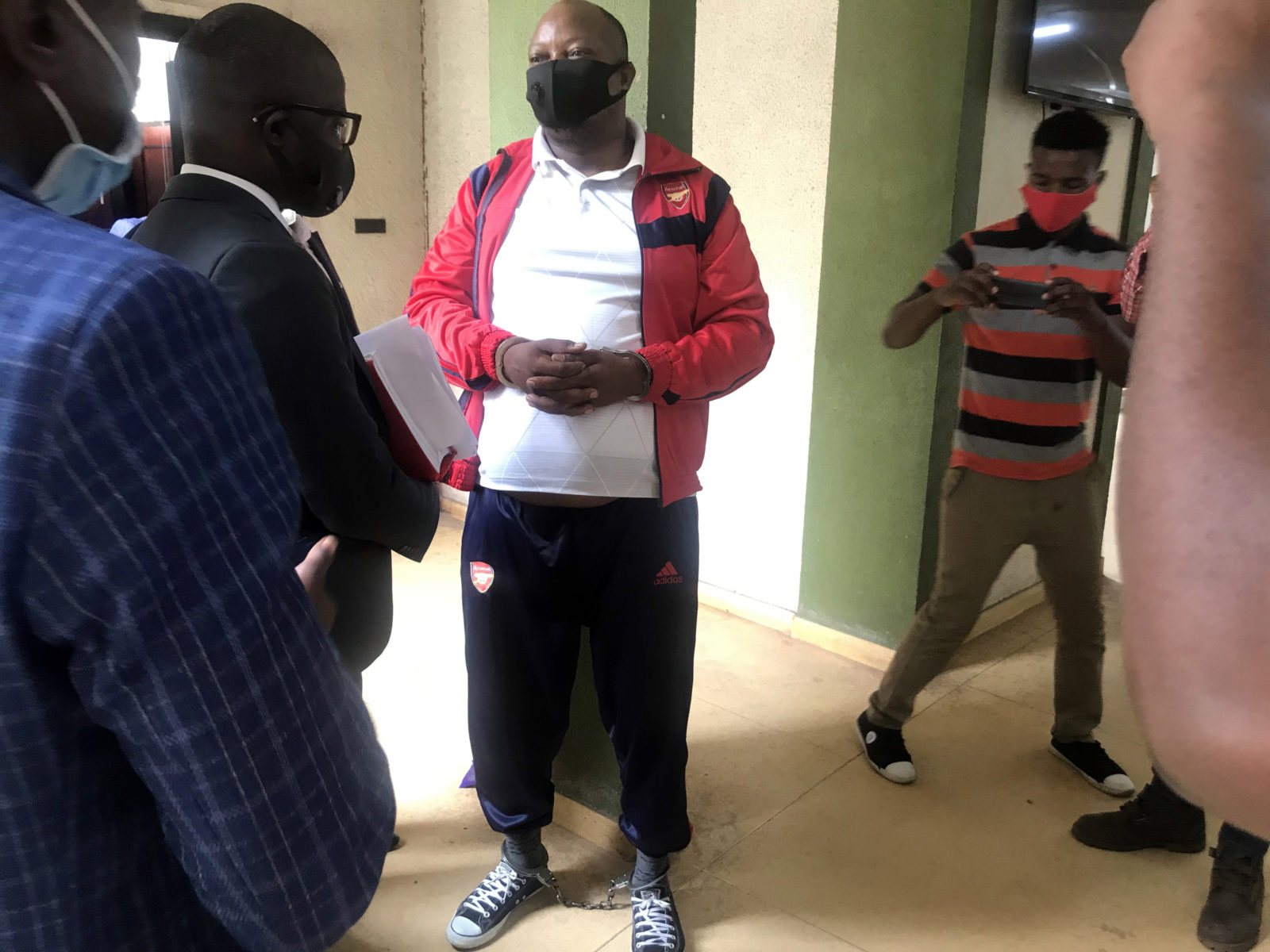 Zimbabweans are using social media platforms to express outrage at the ‘lawfare’ waged by their government against dissenting voices.

“Alert Zimbabwe: I have received information that the Mnangagwa regime wants to arrest me today for the offence which I don’t know. They are alleging that I undermined the authority of the police by Tweeting about the kid allegedly assaulted by them. I have alerted everyone.”

“I am gathering that after my arrest they want to expose me to Covid-19. If anything happens to me let it be known to Zimbabweans that I am Covid-free as I speak. Few days ago I warned about the plot by the regime & they really want to arrest me for no apparent reason. Oppression.”

These were tweets on 8 January by Job Sikhala, a human rights lawyer and vice-national chairperson of Zimbabwe’s main opposition party, the Movement for Democratic Change Alliance (MDCA).

On Saturday, 9 January, as he had warned, he was arrested at the Harare Magistrates’ Court where he was part of journalist Hopewell Chin’ono’s defence team.

Zimbabwe Lawyers for Human Rights (ZLHR) posted these tweets, explaining what Sikhala was accused of:

“Broad charge against @JobSikhala1 is sec 31 of Criminal Code ‘Publishing or communicating false statements prejudicial to the state’ in that he is accused of – sec 31(a)(i) publishing or communicating a statement intending or realising risk or possibility of inciting or promoting public order or public violence or endangering public safety, with alternative charge, sec 31(a)(iii) – undermining public confidence in law enforcement agency.”

ZLHR said the charges arose from statements Sikhala made on Facebook and Twitter about the famous incident involving “a certain mother, child and a cop” which took place in Harare.

On the same day, Chin’ono, who had been arrested the previous day, accused of the same crime, was remanded in custody. It is said that at the time of his arrest, Chin’ono had been in self-isolation since he had been in contact with someone who had tested positive for Covid-19.

Several prominent Zimbabwean lawyers took to Twitter to condemn the arrests of Chin’ono and Sikhala, saying the law used to arrest them was declared void years ago.

Siphosami Malunga, a human rights lawyer and executive director of the Open Society Initiative for Southern Africa (OSISA), tweeted this on Monday:

“What government charges citizens with not just non-existent crimes but crimes that its own Constitutional Court has ruled to be unconstitutional? Zanu-PF is so devoid of moral, legal and constitutional legitimacy; and its own people, Africa and the world know it.”

Alex Magaisa, a lawyer and former chief of staff to the late former MDC leader Morgan Tsvangirai, also posted these three tweets elaborating on the allegation that Chin’ono and Sikhala were wrongfully arrested:

“[email protected] are charging journalist Hopewell Chin’ono @daddyhope under a provision that was struck off from the statute by the Constitutional Court in 2014. In the Chimakure case, the court held that s. 31(a)(iii) of the Criminal Code was VOID.

Doug Coltart, another Human Rights lawyer, also weighed in on the argument and expressed surprise:

“Interestingly, CJ Malaba actually wrote the 2014 Con Court judgment that struck down the offence for being unconstitutional and declared it void (see Chimakure v Attorney General). Legally, the offence that @daddyhope has been charged with does not exist.”

It is not only lawyers who believe Chin’ono and Sikhala are being persecuted by the state for speaking truth to power and not for sharing a tweet claiming a policeman had murdered a baby.

“#FreeHopewell Why is Hopewell @daddyhope being arrested for something thousands of Zimbabweans shared on social media? My next question is apart from the statement police gave that the baby is okay, is the baby actually okay?”

There are people who believe that not only have Sikhala and Chin’ono been charged with a non-existent crime, but that maybe they did not spread false news after all.

The video they shared, which led them to conclude a policeman had murdered a baby, showed a crying woman holding a lifeless-looking baby and with her other hand grabbing a policeman by the collar while the mob around them shouted: “He killed the baby!”

The Zimbabwe Republic Police admits that policemen attacked a kombi with passengers inside, shattered the windscreen and injured some people including a baby and its mother. But they claim mother and baby are fine.

Despite this confession of police brutality and endangerment of civilians, instead of focusing on reforming the police force the government is directing its energies to using the incident to go after leading voices against oppression.

“I am told the military junta led by rebels @edmnangagwa, @MinisterSBMoyo & Chiwenga have given orders to have Adv Fadzai Mahere arrested tomorrow. Again, rebels have continued to use willing @PoliceZimbabwe & the courts to abuse, persecute & terrorise opposition members.”

“That’s why we are demanding reforms. The police shouldn’t be allowed to take orders from politicians. And the use of unjust laws to target and punish the opposition and activists should be condemned.”

Mahere, a renowned constitutional lawyer and spokesperson for the MDCA, is one of hundreds of Zimbabweans who expressed horror after watching the video.

“Members of C.I.D Law & Order visited the home of @advocatemahere yesterday but she was not in. She turned herself in to C.I.D today at 9am in the presence of her lawyers; however, police will not say why they were looking for her or whether she is being charged. More to follow.”

“Arrested. This regime will never break my spirit. We need new leaders.🇿🇼”

ZHLR confirmed the arrest, saying: “Police have proceeded to charge @advocatemahere with violating sec 31 of the Criminal Code. She is at Harare Central Police Station. More details to follow.”

This is the second time Mahere has been arrested in under six months.

She has been leading several social media campaigns advocating for the freedom of political detainees. Just before her arrest she had tweeted:

“Jacob Mafume is the Mayor of Harare. He is being unjustly incarcerated in conditions that have caused the rapid deterioration of his health. He’s sharing a cell with 40 people & has severe Covid-19 symptoms. He has the right to dignity & to be presumed innocent. #FreeJacobMafume”

Mafume is one of hundreds of prisoners of conscience filling Zimbabwe’s prisons. In 2020, we spent almost every week fighting for the freedom of a new political detainee.

Only 11 days into the new year and three prominent dissidents had been arrested. The future looks bleak for Zimbabwe’s dissenting voices.

Maureen Kademaunga, the MDCA secretary for public service and social welfare, had this to say after Mahere’s arrest:

“The list keeps growing. Fadzai Mahere, our party spokesperson, has been taken in. Political repression under the guise of Law & Order is on the rise. No-one is safe anymore.”

After her release on bail, Mahere tested positive for Covid-19, which she is believed to have contracted in prison. Sikhala and Chin’ono were also released on bail, to the relief of many, but Emmerson Mnangagwa’s government had more tricks up their sleeve.

On 1 February, police rearrested the MDCA’s Joana Mamombe, Netsai Marova and Cecilia Chimbiri, popularly known as the MDC trio after their abduction, enforced disappearance and torture by state security agents in May 2020.

Police released Marova but charged Mamombe and Chimbiri under section 11 of SI 83 2020, for obstructing or hindering police officers performing their duty during lockdown.

They are alleged to have shouted at police officers in Shona, saying “do not arrest those people, you will infect them with #COVID. Release them.” Their lawyer, Charles Kwaramba, said: “Hon. Mamombe & Chimbiri are being targeted to break their spirits since as women Human Rights Defenders, they have chosen to participate in the political processes of their country. The intention is to completely break them down.”

The two were denied bail by magistrate Stanford Mambanje, who said there was little reason to trust that the duo would not commit offences while on bail. They are remanded in custody at the Chikurubi maximum security prison, until 18 February.

Also in this notorious prison is Alan Moyo, a 23-year-old student activist who has been in jail without trial for more than 60 days. He is accused of inciting public violence.

A former Zanu-PF youth leader turned opposition after the 2017 coup, Jim Kunaka, has also been in prison since 24 December 2020. He was charged with inciting people to take part in the 31 July anti-corruption protests.

There are many other political prisoners rotting in Zimbabwe’s prisons. Sadly, not all of them are known or popular activists so their cases do not receive prominence. Some have been there for years, many of them since the January 2019 protests.

Zimbabweans have been using Twitter and other social media platforms to express outrage and displeasure at the actions of the government. It is clear from the government’s actions that speaking truth to power, on its own, is not enough to protest against wrongful arrests and tyranny at large.

It is evident that the government of Zimbabwe is hellbent on continuing to use the law (imagined, real and concocted) to oppress and repress dissenting voices. They have captured all law enforcement agencies and the judiciary, allowing them to engage in what is clearly lawfare – “the use of law as a weapon of war”.

Our country is in the hands of criminals. I believe as things stand, that just speaking out is not enough, only a nonviolent uprising of the people can free Zimbabwe. We urgently need a peaceful revolution before the government throws all dissidents in jail for fighting for freedom. DM/MC

Motheo Brodie and Sasha Stevenson • 06 MAY