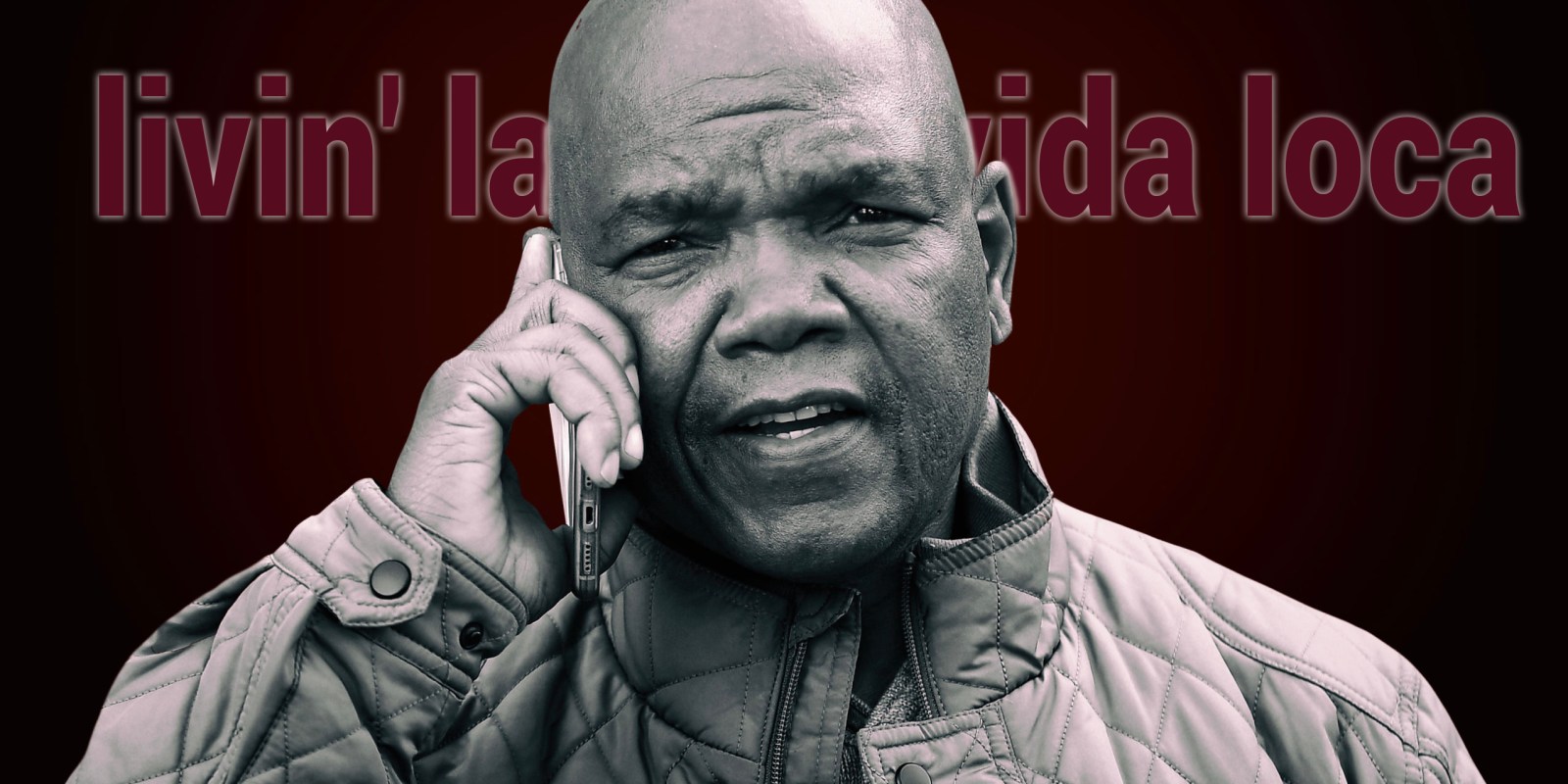 The indictment against the former head of Crime Intelligence Richard Mdluli shows it was a friends-and-family affair down at his division, filled with travel, luxury homes, cars and clothes – all at the taxpayers’ expense.

Barely four months after he was appointed divisional commissioner of Crime Intelligence (CI), Lieutenant-General Richard Mdluli took annual leave and blew over R100,000 of taxpayers’ money on an all-expenses-covered trip to China with his wife.

From 9-13 November 2009, Mdlui and his spouse, known as Agent 78 and who was also employed by CI, flew business class to China to visit their daughter, Agent 80, who was also on the CI Secret Service Account (SSA) payroll.

The Mdlulis took out family travel insurance valued at R86,152 and once in China shopped up a storm, packing in electronic goods, shoes and clothing. We even paid for the sightseeing.

That same year, in July, the man who played a pivotal role in Jacob Zuma’s trajectory to the highest office of the land was selected to head the key position of head of Crime Intelligence with its brimming Secret Service Account.

He was appointed by the former president after a panel, composed of then Minister of Police Nathi Mthethwa, Minister of State Security Siyabonga Cwele, his deputy Susan Shabangu and Deputy Minister of Home Affairs Malusi Gigaba had “recommended” him.

This was after Mdluli had worked his way steadily up the ranks, joining the then apartheid South African Police in 1979 and also serving in the notorious East Rand Unit of the Special Branch that hunted and murdered anti-apartheid activists in the 1980s.

By the time the top candidate came up for selection, the panel seemed to overlook this history and the not insignificant fact that Mdluli had already been implicated, in 1999, in the kidnapping and murder of Oupa Ramogibe, Mdluli’s ex-girlfriend’s partner.

In December 1998, Ramogibe lodged a criminal complaint of attempted murder after Mdluli had threatened him. In February the following year Ramogibe was dead.

That same year Mdluli and his co-accused, Mthembeni Mthunzi, were charged with the assault, kidnapping and murder of Ramogibe. The case dragged on for years, but in 2014 the South Gauteng Director of Public Prosecutions, advocate Andrew Chauke, came to the rescue and withdrew the sword of Damocles that hung over Mdluli’s head. Chauke was later criticised by the Supreme Court of Appeal for the decision.

Twenty years later Mduli – after drawing a cumulative salary of R8.3-million during his seven-year suspension before he was “let go” by the then Minister of Police, Fikile Mbalula, in 2018 – was sentenced, along with Mthunzi to five years’ imprisonment, but only on charges of assault and kidnapping. Somewhere along the road the murder charge was parked.

Mdluli, who was due back in court on Monday 8 February, did not make an appearance alongside his fellow accused, former Crime Intelligence colleagues Colonel Hein Barnard, supply chain manager for the secret fund, and Major-General Solomon Lazarus, who was in charge of the Covert Intelligence Support Unit and chief financial officer of the secret fund,  directly responsible and accountable for CI “frontal organisations”. Mdluli, who is serving time, has twice checked in sick before a court appearance.

Collectively the men face 15 counts of contravening the Prevention and Combating of Corrupt Activities Act, fraud and corruption. The matter was postponed for a pre-trial hearing on 19 February. The accused will appear again in person on 4 March.

These powerful positions not only enabled Mdluli to deal with “political cases” – including the arrest of Gerrie Nel who was about to prosecute Selebi – but also rewarded him with unfettered access to the CI secret fund.

The detailed indictment shows that the China package tour in 2009 was not the first or the only one Mdluli undertook.

The new CI boss had hardly hit the desk when he accompanied the then national commissioner, Bheki Cele, to attend the 78th General Assembly Session of ICPO-Interpol in Singapore. This was from 11 October 2009 to 15 October 2009, before the China trip in November.

On this trip Mdluli splashed out on electronic goods, clothing, jewellery, perfume and luggage, which he claimed for from the secret CI fund.

He had just unpacked the Singapore suitcases when he was off again to China. This time Mduli was flying economy class with a CI colleague at the cost of R10,299 each, but a mysterious agent SA 92, flew business class.

Agent SA 92, according to the indictment, had worked as a chief admin clerk at the Department of Home Affairs at the time. According to South Africa’s birth register, Mduli is listed as the “natural father” of a child born to SA 92 in 2004 and another in 2007.

Agent SA 92 began her career at Home Affairs in 2003 but resigned in 2010 and was appointed as a colonel in the CI agent programme.

The summary of facts also lists Agent SA 70 as Mdluli’s “son” who was appointed as a captain in the CI agent programme in 2010, while Agent SA 78 is Mduli’s ex-wife, whom he divorced in July 2010.

Agent SA 78, the charge sheet reveals, worked as a clerk at the Gauteng provincial commissioner’s office, Loss Management Section, but was appointed in 2010 as a colonel in Mdluli’s CI agent programme.

Agent 80 is Mdluli’s daughter, the one he visited in China and who was appointed a lieutenant-colonel in daddy’s programme.

At some point, Mdluli had simply handed Lazarus a list of people “who should be appointed as CI agents and he went ahead”. All were promoted and received cars to the cumulative value of around R1.5-million, including high-end VW Golfs, BMWs and an Audi.

In November 2010 CI signed a year-long lease with Daez Trading CC for a property in Clearwater Estate, Boksburg. Daez Trading acted as a middleman for UTE, a CI front. The initial lease was around R20,000 with a 10% annual escalation. The lease was approved by Lazarus.

The house was supposedly to be used by Mdluli for “strategic planning with Component Heads” but the boss had “exclusive rights from the day the house was acquired”.

Mdluli also owned a property at Gordon Villas in Gordon’s Bay for which Daez signed a three-year lease at around R10,000 with the usual 10% annual increase. Mdluli got a cool R7,000 tax-free cash rental per month from the deal, reads the indictment.

The indictment also details how audits that were being done on Mdluli’s projects were halted and how he used a payment to Karin Hanekom Attorneys from the secret fund to settle a portion of a personal debut he owed.

Investigators worked hard to nail Mdluli; that much is clear from the indictment.

Considering the exploded view of State Capture and the role of the State Security Agency and Crime Intelligence that has been provided at the Zondo Commission it should come as no surprise to learn of the extent of Mdluli’s profligacy, which is perhaps matched triple-fold by that of the man he served, Jacob Zuma.

The cost to South Africa of placing this former apartheid cop in this critical position has been immeasurable. The lives of many many good people have been ruined along the way, to say nothing of the millions that went down the dark Mdluli drain while crime syndicates moved in and set up alternative governments across South Africa’s cities, suburbs and townships. DM