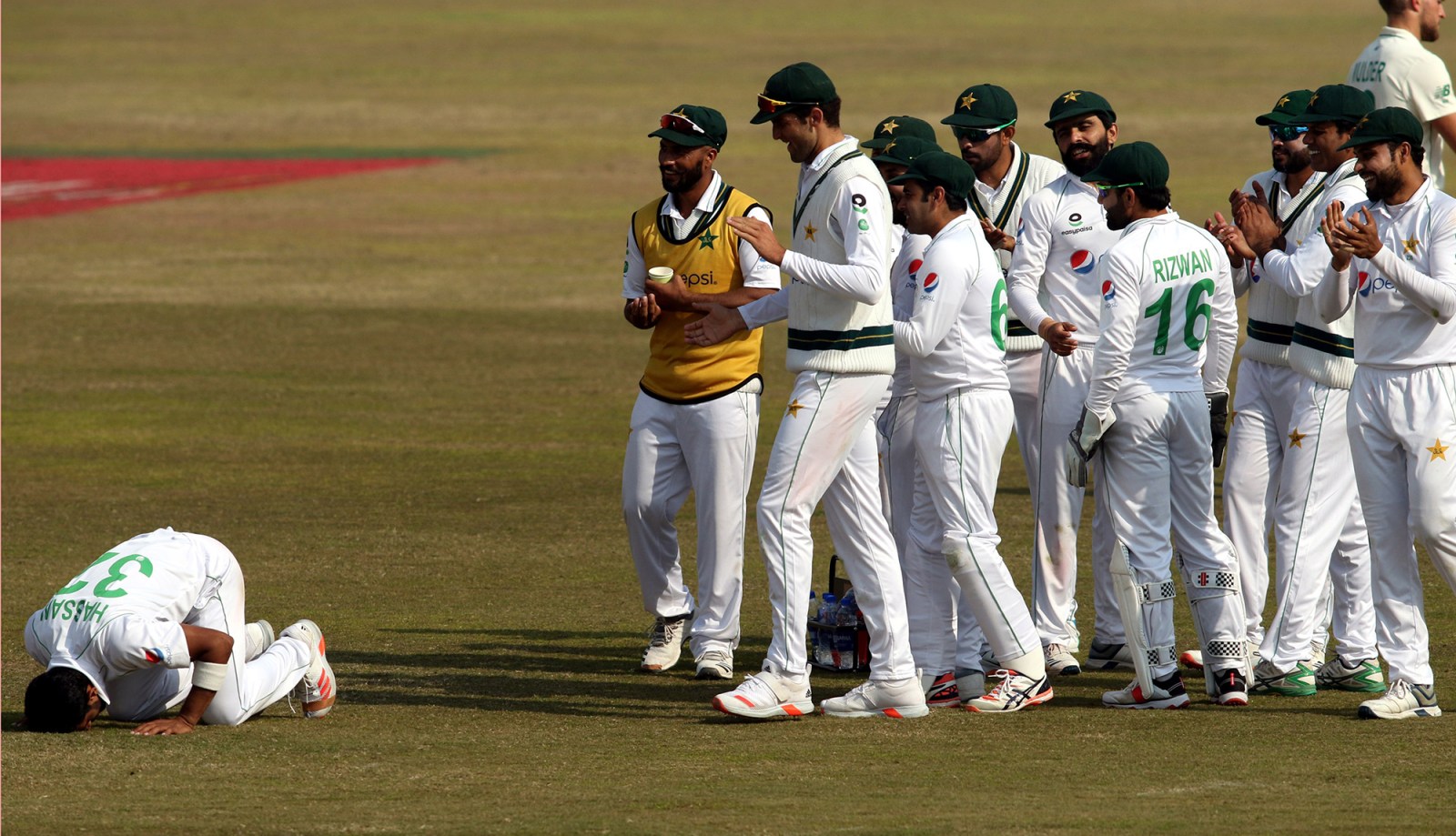 Pakistan's Hasan Ali bows down after taking the wicket of South Africa's George Linde during the fifth and final day of the second Test between Pakistan and South Africa at the Rawalpindi Cricket Stadium on 8 February 2021. EPA-EFE/SOHAIL SHAHZAD

Pakistan wrapped up the 2-0 series victory in Rawalpindi on Monday thanks to a familiar Proteas batting collapse, although a lot of credit must go to a masterful display of seam bowling.

In a now familiar chain of events the Proteas lost seven wickets for the addition of only 33 runs on day five of an enthralling second Test against Pakistan, to lose by 95 runs.

That gave Pakistan a 2-0 series victory over South Africa – their first in 18 years – after winning the first Test in Karachi by seven wickets last week.

It has also given South Africa coach Mark Boucher, and convenor of selectors Victor Mpitsang, some food for deep thought. As the Proteas have no more Tests scheduled until December 2021 after Australia postponed their March tour to South Africa, it will be a long time to stew.

Although the Proteas’ batting collapse was disappointing, it was largely induced by a brilliant spell of hostile and tight fast bowling from the Pakistan duo of Hasan Ali and Shaheen Shah Afridi with the second new ball.

Hasan claimed five for 60 to add to his five in the first innings, returning match figures of 10 for 114. Afridi picked up four for 41 in the second innings as they continued a great tradition of Pakistan seam bowling.

Afridi, a tall left-armer, has a different style to former Pakistan great Wasim Akram, but he is no less exciting. Hasan has a similar action to the great Waqar Younis [currently Pakistan’s bowling coach] and the pair’s spell after lunch with the new ball was reminiscent of those two greats in their prime.

Afridi used his pace and height to test the batsmen with the occasional bouncer, striking Wiaan Mulder on the helmet. But he also employed full deliveries to extract swing. Hasan bowled briskly and with great accuracy, giving the batsmen almost no loose balls while also producing some late swing. It was a masterful hour of bowling from the two.

South Africa were out-batted and out-fielded and ultimately outplayed, despite some signs of improvement.

Brief hope before the collapse

Occasional batting collapses, especially on day-five pitches, are not that unusual in this form of the game. But South Africa are prone to them in every match, in every innings. In the first innings of this match, they lost five for 37. That, more than the collapse on day five, was the reason for this defeat as South Africa only scored 201 in the first innings in reply to Pakistan’s 272 first-innings total.

Last week, in the first Test in Karachi, the Proteas lost seven for 87 and nine for 70 in their two innings. They have now lost four of their past five Test series and 10 of their past 13 Tests.

They can’t even blame the conditions. The Rawalpindi pitch was still a good wicket to bat on, on days four and five, with few demons in it for the batsmen.

Aiden Markram, Rassie van der Dussen and Temba Bavuma all showed that with some application there were runs to be had. Unfortunately, several others, most notably skipper Quinton de Kock, did not display the same mental fortitude.

But it wasn’t enough to stop an always likely Pakistan victory. South Africa needed 370 to win, which was always going to be an unlikely outcome. But the tourists reached 241 for three shortly after lunch on the final day.

Suddenly the target was in sight and there were seven wickets in hand. Could it be? No, it couldn’t. The second new ball brought delight for Pakistan, who had started the day superbly before Markram and Bavuma fought back. Their 106-run partnership was valuable, especially after an early wobble, but not enough to stave off defeat.

When the morning’s play started, South Africa were on 127 for one, with Van der Dussen comfortably set on 48. There was always a feeling that for South Africa to have a realistic chance of winning, Markram, who began the day on 58, and Van der Dussen would have to bat until lunch.

Within three balls that plan was in disarray when the superb Hasan ripped Van der Dussen’s leg stump out of the ground with a ball that nipped back. South Africa had not added to the overnight total.

Faf du Plessis’s stay at the crease was uncomfortable and brief as he looked out of sorts. Inevitably, Hasan produced another fine ball that swung in late and stayed low, trapping Du Plessis for five.

In this match of ebbs and flows, the target suddenly seemed further off than Roodepoort from Rawalpindi. Markram and Bavuma, though, dug in and stabilised the bleeding before resuming the mammoth task of chipping away at the runs.

Markram went to his century with a single off the last ball before lunch, but his stay after the break wasn’t long. After some probing bowling with the new ball, Hasan tempted Markram with a slightly wider one. The batsman should’ve have left it alone, but a brief lapse in concentration at the sight of seeing a rare wide delivery saw Markram poke at it and edge to slip where Imran Butt took a routine catch.

It was one weak moment in an otherwise superb innings. But mistakes have consequences and the consequence of this one was that it exposed the out-of-form De Kock to a new ball, in the hands of a man in fine fettle.

De Kock didn’t even bother to knuckle down and make the bowler work for his wicket. Hasan bowled a full ball across De Kock and the Proteas captain attempted a lazy drive that might have been hit for four if the batter had his eye in. Instead, it flew off the edge to Butt who snaffled the sharp chance.

And so the procession of wickets continued. Bavuma and Mulder briefly looked to halt the slide, but when the former feathered a good ball from Afridi to keeper Mohammad Rizwan, the match was over. The rest of the tail was mopped up and Pakistan deservedly took the spoils. DM