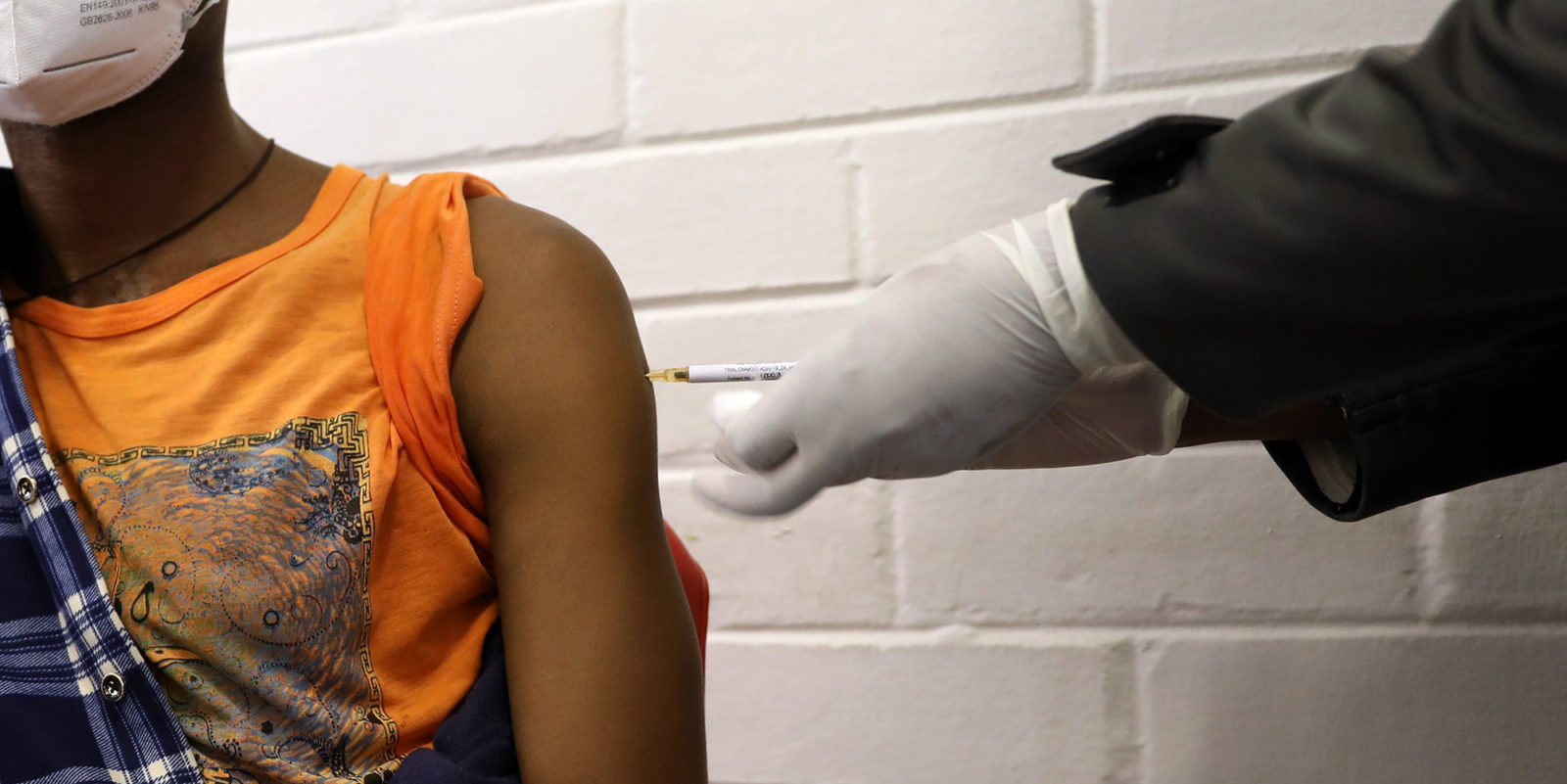 With a shift in budget priorities, Africa can build a robust public health system and wean itself off foreign supply chains whose sudden nationalisation has crippled the continent’s response to the Covid-19 pandemic. (Photo: EPA-EFE / Siphiwe Sibeko / Pool)

The shameless and irrational hoarding of vaccines by Western nations has shown that when it comes to survival, the ever-busy Western supply chains will suddenly grow cold. The notion of multilateralism so fervently proselytised by the West is quickly cast out of the window in the rush to survive the pandemic.

The race to inoculate world populations against Covid-19 has begun in earnest and Africa is losing it. According to The New York Times, as of 4 February 2021 a total of 107.3 million vaccine doses had been administered to individuals across the world. North America leads with 6% of its population having been vaccinated, Europe is on 3.6%, Asia is on 0.9%, South America is on 0.7% and Africa lags far behind with fewer than 0.1% while Oceania has none.

In Africa, only four countries have begun administering vaccines to their populations. Morocco is ahead of the pack having administered 200,081 doses, Seychelles is a distant second on 30,861, Egypt has managed 1,315 while Algeria is fourth with a measly 30 vaccinations. South Africa will soon roll out its vaccination campaigns after receiving one million doses of the Oxford-AstraZeneca Covid-19 vaccines (ED: Doubt has now been cast on the efficacy of the Oxford-AstraZeneca vaccine to protect against what is commonly called the South Africa strain).

The latest numbers paint a gloomy picture for the continent, which has recorded just under 3.6 million cumulative cases, more than 407,000 active cases and 92,391 deaths. South Africa has been the hardest hit on the continent with more than 1.4 million confirmed cases to date and 44,946 deaths making up 48% of the continental total. Even more worrying is that the Covid-19 death rate has spiked from 2.1% in July 2020 to 2.5% at the moment, and in 21 African countries the rate is above the global average of 2.2%.

This is compounded by the emergence of a new coronavirus variant first identified in South Africa known as 501.V2 which reportedly spreads faster than the original virus and may undermine the efficacy of the current vaccines. The Africa Centres for Disease Control and Prevention (Africa CDC) has said that the continent needs to inoculate at least 60% of its population to achieve herd immunity. As such, Africa needs access to Covid-19 vaccines as soon as possible.

However, vaccine nationalism presents a formidable challenge as developed countries rush to hoard the available vaccines, leaving nothing for developing countries.

With vaccine prices ranging from $10 (R148) to $60 (R890.50) per dose, most African countries have been effectively priced out of the market. The Pfizer-BioNTech vaccine costs $19 per dose, Moderna and the AstraZeneca-Oxford vaccines cost $25-$37, Johnson & Johnson is priced at $10, Russia’s Sputnik V vaccine also costs $10 and China’s Sinovac is the most expensive at $60.

President Cyril Ramaphosa, who is also the African Union chairperson, decried the hoarding of the vaccines which is “being done to the exclusion of other countries in the world”. The African Vaccine Acquisition Task Team set up by Ramaphosa in August 2020 has reportedly secured an additional 270 million doses from Pfizer, AstraZeneca and Johnson & Johnson to be supplied later in 2021.

African countries are also relying on the 600 million doses to be distributed through the World Health Organisation’s Covax initiative, which will cover about 20% of the population.

The shameless and irrational hoarding of vaccines by Western nations has shown that when it comes to survival, the ever-busy Western supply chains will suddenly grow cold. Africa’s long-standing relationship with the West has historically necessitated a Western-inclined approach to African problems. This historical bias needs to be scrutinised. Over-dependence on the West can undermine the continent and its people’s survival when supplies of essential medical products like the vaccines become nationalised as they have been.

Just recently the European Union announced that it will institute export controls on vaccines made in European factories, further constricting already fragile supply chains. Even the notion of multilateralism, so fervently proselytised by the West, seems to be only viable in good times. In the rush to survive the pandemic, it is quickly cast out of the window.

The Covax initiative, which promises fair and equitable access to vaccines and which presents many poorer nations’ best chance to get the vaccines, has also been beaten to the market by the developed countries, some of which are even part of the initiative. According to the Economist Intelligence Unit, only three countries in Africa (Gabon, Libya and South Africa) have made financial contributions to the Covax facility. The rest of the countries joined the initiative under the Advance Market Commitment (Covax AMC) which relies wholly on donations through official development assistance. This reinforces Africa’s dubious distinction as an aid-dependent continent.

The emergence of China’s Sinovac and Sinopharm vaccines and Russia’s Sputnik V vaccine will diversify the supply chains to the advantage of Africa and other poor regions. Indeed Egypt, Morocco and Seychelles are inoculating their populations with China’s Sinopharm vaccine while Algeria is using Russia’s Sputnik V vaccine. The vaccines are less of a logistical nightmare as they can be stored in standard refrigerators whereas Pfizer, BioNTech and Moderna need to be stored at between -70°C and -20°C.

In a diplomatic offensive, China has already offered $2-billion to Africa and pledged to make the vaccine available to the continent. While this is a welcome offer, it is not sustainable as it makes Africa dependent on the goodwill of others for lifesaving medicine.

The continent should harness and develop manufacturing and research and development capacities of its own so as to cut the dependency on foreign-controlled supply chains, especially for pharmaceutical products. Although there are fairly vibrant pharmaceutical industries in Egypt, Kenya, Morocco and South Africa, the continent depends on foreign suppliers for 80% of its pharmaceutical and medical supplies. Chronic shortage of human resources, lack of capital and modern technology, and the Balkanisation of African markets are some of the factors that have to be addressed urgently to stimulate the growth of the all-important pharmaceutical industry in Africa.

The implementation of the new African Continental and Free Trade Area – especially the elimination of tariffs and non-tariff and technical barriers to trade and the application of the rules of origin – may give a new lease of life for the pharmaceutical industry. The establishment of the Africa CDC in 2016 to boost the continent’s public health policies is also a step in the right direction.

While Africa welcomes the assistance in the construction of its CDC by its strategic partner, China, it nonetheless raises questions about the ability of its leaders to invest in health infrastructure. It certainly does not inspire confidence that the AU will be able to independently source the funds to support the activities and the work of the CDC.

Moreover, there is a need for a paradigm shift in the understanding of national security among African leaders. African countries spend between $8 and $129 on health per capita per annum, far below the $4,000 average spent in high-income countries.

While Africa carries 23% of the disease burden, it accounted for only 1% of global health spending in 2015. Major countries like Nigeria, Kenya and Ghana spent 0.5%, 2.1% and 1.1% of their budgets on healthcare respectively in 2017, which is way below the 15% threshold recommended at the 2001 Abuja Declaration.

Yet military spending has gone up 20% in the past 10 years. As such, there is a need to move away from a traditional understanding of national security as military spending, to embracing a holistic view of security as inclusive of poverty reduction and, much more importantly, public health preparedness. With a shift in budget priorities, Africa can build a robust public health system and wean itself off foreign supply chains whose sudden nationalisation has crippled the continent’s response to the Covid-19 pandemic, putting the very survival of its people in jeopardy. DM

Dr David Monyae is the Director for the Centre for Africa-China Studies at the University of Johannesburg and Dr Sizo Nkala is a postdoctoral fellow at the same centre.

Information pertaining to Covid-19, vaccines, how to control the spread of the virus and potential treatments is ever-changing. Under the South African Disaster Management Act Regulation 11(5)(c) it is prohibited to publish information through any medium with the intention to deceive people on government measures to address Covid-19. We are therefore disabling the comment section on this article in order to protect both the commenting member and ourselves from potential liability. Should you have additional information, please email [email protected]