Proteas face a fifth-day reckoning against Pakistan in Rawalpindi 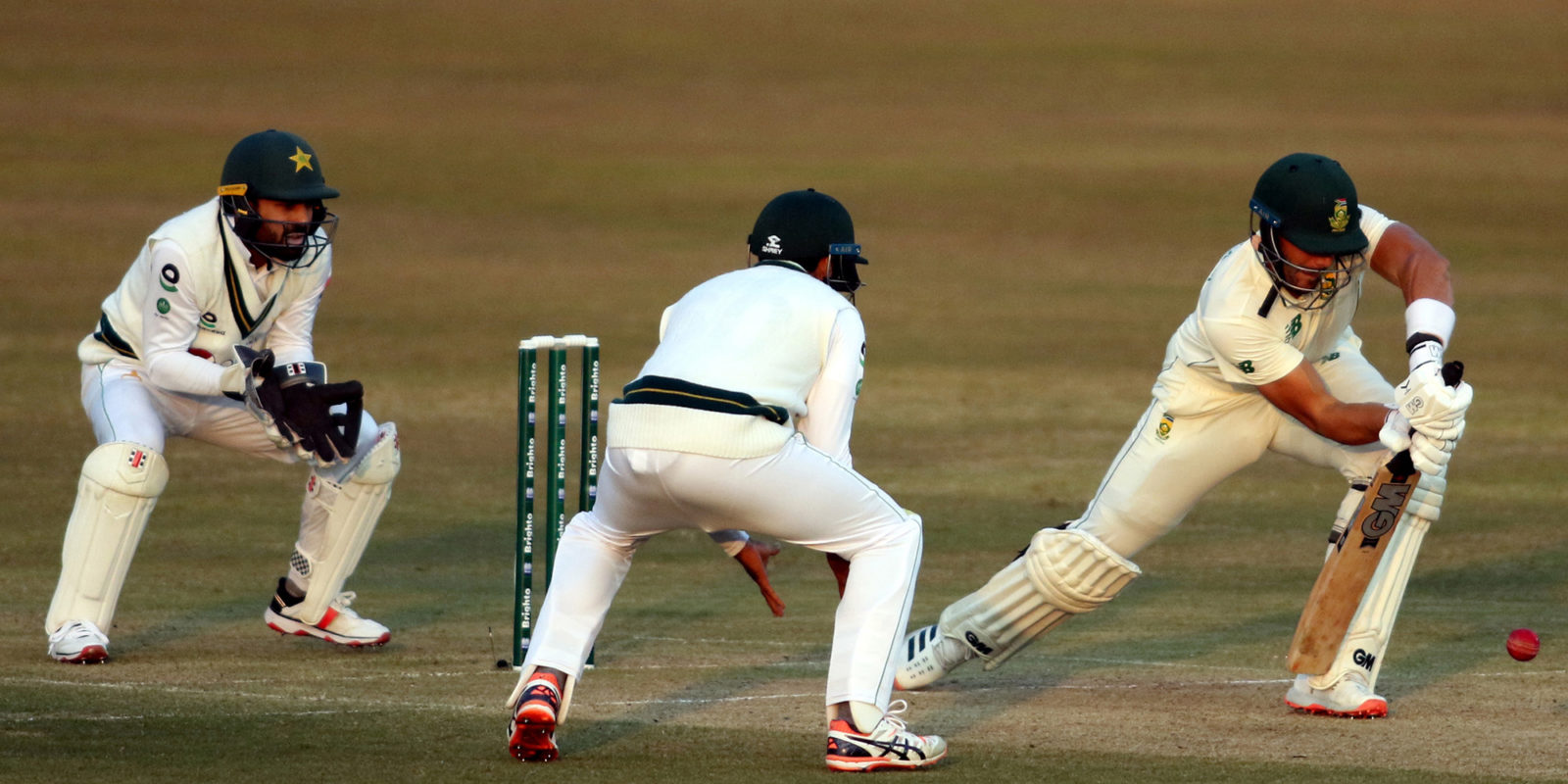 The brief two-Test series between Pakistan and South Africa will come down to the final day in Rawalpindi on Monday after the Proteas’ top order laid the foundation for an unlikely victory.

The Proteas will have to break new ground if they are to chase down the 370 needed for victory over Pakistan in Rawalpindi on a day-five pitch. But they need only watch highlights of the West Indies’ heroics from nearby Bangladesh earlier in the day to draw inspiration for Monday’s reckoning in this absorbing series.

On Sunday the West Indies chased down a mammoth 395 in the fourth innings to beat Bangladesh by three wickets in Chattogram, with debutant Kyle Mayers scoring an unbeaten 210.

It was the highest fourth-innings score to win a Test on the subcontinent. If South Africa chase down the 370 needed for victory over Pakistan, it would be the highest chase by a South African team in Asia to win a match.

The Proteas need 243 more runs for victory with nine wickets in hand and 98 overs to play, to reach that unlikely mark. Aiden Markram (59 not out) and Rassie van der Dussen (48 not out) will resume on day five on 127 for one with history on the horizon. Their second-wicket partnership is worth 92 runs, but they probably need to double that to give the Proteas a chance of pulling off a heroic achievement for an under-pressure batting unit.

Since 2011, the Proteas have been set fourth-innings scores in excess of 200 to win a match 20 times. They’ve lost 17 of them and drawn three. The portents are not good to reach the mammoth 370 target which would level the series. But records are there to be broken and South Africa have made a strong start on a pitch that is still playing true. There are no demons in this wicket.

The Proteas have not scored in excess of 300 to win a Test since beating Australia in Perth in 2008, when they scored a remarkable 414 in the fourth innings.

“The batting unit know they haven’t done as well as they wanted to [in recent series]. We wanted to score more hundreds, so hopefully tomorrow we can have a hundred or two, if all goes well,” Proteas assistant coach Enoch Nkwe said after the day’s play.

“Hopefully, tomorrow we can look to take a step forward as a batting unit. That will give us a lot of confidence for future series. The wicket is playing quite well and the guys just need to apply themselves.

“We’ve encouraged the guys to be themselves and just play. We’ve done a lot of work in terms of clearing their minds and playing within their own characters.

“We’ve spoken about making sure we keep up the intensity, we stay in the moment and we don’t get carried away. But we are not going to go in waiting for 5 o’clock. We are going to play and let’s see how far we get.”

There is no shortage of time for South Africa to reach the required target, but day five’s first session is going to be crucial. If Pakistan make an early breakthrough it will send ripples through the rest of the fragile batting lineup.

It’s obvious, but Markram and Van der Dussen need to see out most of, if not the entire first session, to lay a foundation while also sowing doubt in the minds of the Pakistan bowling unit.

Markram and Van der Dussen have been here before. In the second innings of the first Test, the pair put on 123 for the second wicket and carried the Proteas to 175 for one. But when they fell in quick succession just before the close on day three, the rest of the batting unit collapsed like a tent without poles.

“In the last Test match right at the close of play, we lowered our intensity. That was an area we looked at and it’s good to see the guys responding,” Nkwe said.

“It’s good that the same two [Markram and Van der Dussen] that were in the situation in the first Test are taking full responsibility to make sure the team doesn’t fall into that again. Hopefully they can build on this partnership because that is going to be key. We know in the subcontinent wickets can fall in clusters and that’s something we are trying to avoid.”

Earlier in the day Pakistan resumed their second innings on 129 for six and frustrated South Africa’s bowling, eventually scoring 298 all out. Mohammad Rizwan scored an unbeaten 115 for his debut century. He was dropped by Van der Dussen when he had four. He made the tourists pay as the last three wickets added more than 150 to the total.

George Linde, who suffered a bad injury to his left hand when fielding a ball on day one, which gashed a finger and exposed the bone, collected a career-best five for 64. DM