Republicans leave it to Democrats to boot Trump ‘star... 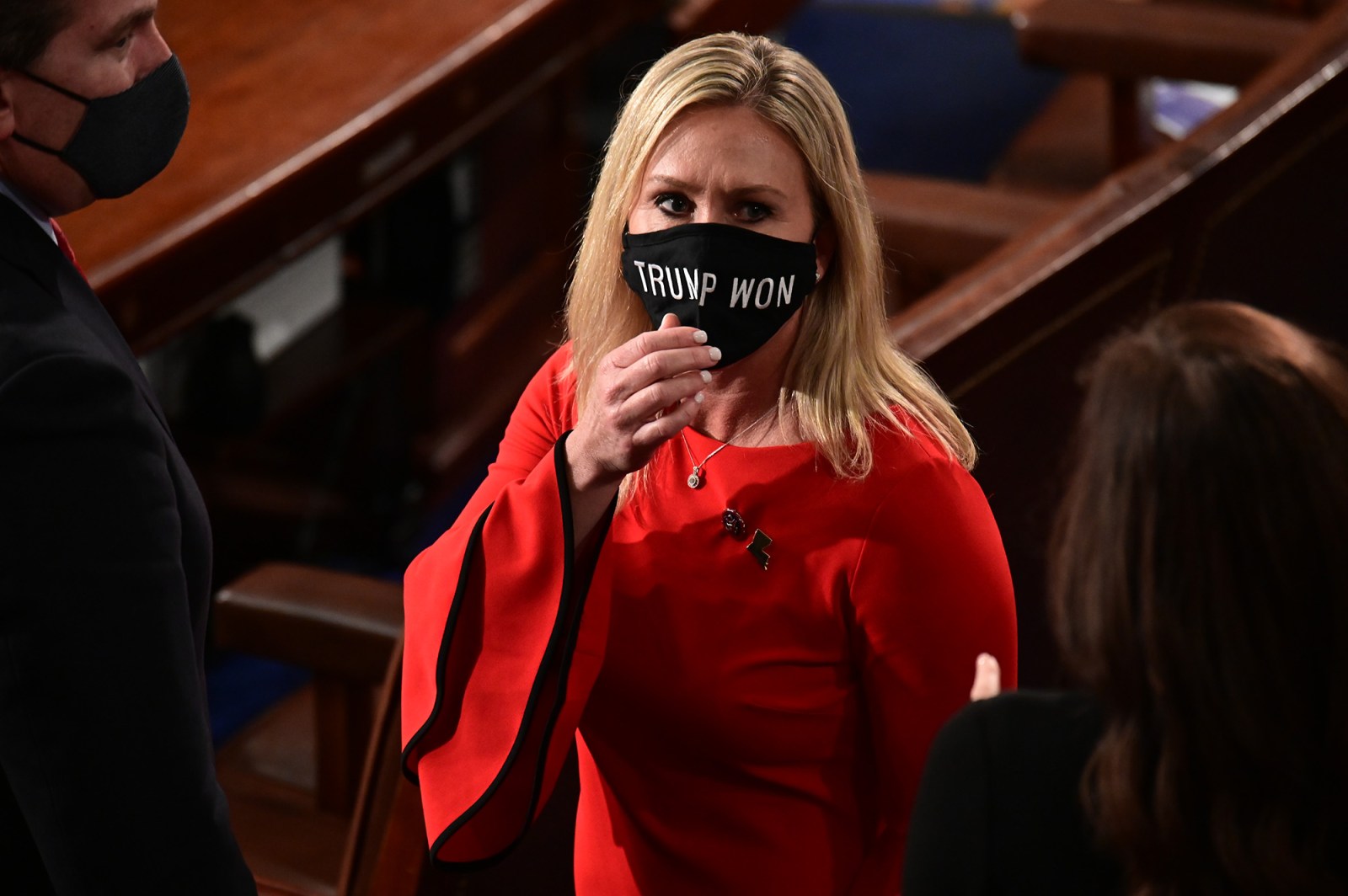 U.S. Rep. Marjorie Taylor Greene arrives on the floor of the House to take the oath office on the year's opening session on January 3, 2021 in Washington, DC. (Photo by Erin Scott-Pool/Getty Images)

Democrats and some Republicans want Greene out of Congress or, at the very least, off its committees. The full House will vote on it on Thursday. Greene, who has pushed QAnon theories, is known for racist rhetoric and has referred to school shootings as staged.

A digital footprint is hard to hide. It’s a lesson Marjorie Taylor Greene is learning the hard way. Republicans gathered late on Wednesday afternoon to decide, but appeared rather to dither, on the way forward with regards the woman who took her oath of office on 3 January 2021 with “TRUMP WON” emblazoned on her mask – leaving it to the Democratic majority’s vote.

It is not difficult to see why some of her fellow Republicans see Greene as possibly not the best leadership material. Before running for office, the newbie, or as the Americans say “freshman”, Republican representative also “liked” comments about executing high-profile Democrats, including House Speaker Nancy Pelosi, “with a bullet to the head”. Then she won easily in the heavily Republican 14th Congressional District of Georgia.

But she is likely best known among Americans for referring to a school shooting with massive fatalities as a “false flag”.

On 14 February 2018, 17 people (14 students and three staff) were killed in a shooting at Marjory Stoneman Douglas High School in Parkland, Florida. Conspiracy theorists were quick to call the shooting a “false flag” – referring to an event planned by someone other than the person found to have carried it out, or to refer to an event as fake or staged. The term is popular among conspiracy theorists. It is also a technique used by cyber hackers, as well as a war term referring to one side trying to confuse the other by using a flag that would make them appear to be an ally.

Greene supported this theory, putting her opinion on broad public display in Facebook posts which have since been removed, but not before being widely reported by the US media. Students who survived the Stoneman High shooting and parents of the victims have called for Greene to resign from Congress because “conspiracy theorists don’t deserve a seat in the people’s House”.

.@mtgreenee, will you be resigning? For the good of this country, you should. Parkland was not a made up false flag event. My daughter and 16 others were murdered that day. https://t.co/wGDSSGeeO6

Greene also posted footage of herself in a 2019 confrontation attempt with David Hogg, a survivor of the shooting who went on to become a gun control activist. In what could politely be described as heckling, she tried to elicit a response from Hogg, then 18 years old. Greene told him: “I carry a gun for protection… you are using your lobby and the money behind it, and the kids, to take away my Second Amendment rights.”

It seems she was confused or upset about the attention he’d been getting from politicians and the media: “How did you get over 30 appointments with senators… how did you get major press coverage on this issue?” He does not respond and she eventually turns to the camera and says he is “a coward, he can’t say one word, because he can’t defend his stance”.

This from a 40-plus adult who has just told an 18-year-old survivor of a school shooting that she has a gun on her person: “I have a conceal permit, I carry a gun for protection.” She also very clearly asks: “Why are you supporting red-flag gun laws?”

Speaking to the media after the video surfaced, Hogg said last week he had felt fear when Greene said she carried a gun, but he also said that as a child he was taught that it was best not to respond to bullies:

Media Matters for America, a web-based non-profit that monitors the US media, also reported, with the accompanying screenshot below, that Greene has posted support for Q, the “head” of QAnon, on Facebook in 2018. 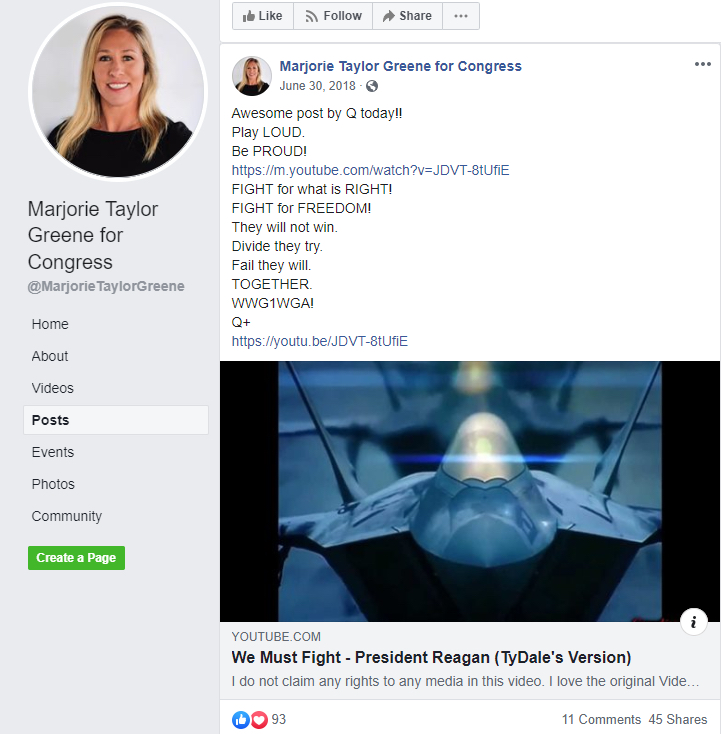 The fervent MAGA supporter (it is in her Twitter bio) has also postulated that no plane flew into the Pentagon on 9/11, which some Republican leaders have found particularly irksome.

The woman former president Donald Trump called “a future Republican star” also believes that wildfires in California were caused by a “space laser” – an idea she shared on social media and which caused many people to respond, much like Republican Senate leader Mitch McConnell, by calling her a “loony”. McConnell also said:

“Somebody who’s suggested that perhaps no airplane hit the Pentagon on 9/11, that horrifying school shootings were pre-staged, and that the Clintons crashed JFK Jr’s airplane, is not living in reality.”

Greene has also shown other biases/prejudices, being very vocal about her unhappiness after midterm elections in 2020 saw three Muslim members of the House of Representatives re-elected and five Muslims elected at state level: “There’s an Islamic invasion into our government offices right now” and “Muslims do not belong in our government”.

One of the five elected at state level is Colorado’s Iman Jodeh, a 38-year-old first-generation American and daughter of Palestinian immigrants. She assumed office on 13 January, 10 days after Greene herself was sworn in. (President Joe Biden, during his campaign, called on the Muslim-American community to go to the polls, and they did.)

On Wednesday, 3 February, Greene, who is also on the Budget Committee, was appointed to the Education and Labor Committee, which prompted Pelosi to ask the Republicans what were they thinking:

Republican Senator Todd Young of Indiana said this week Greene was an “embarrassment” and “there’s no place for her in our party. There ought not to be.”

On Wednesday, 27 January, Democrat Congressman Jimmy Gomez filed a resolution calling for Greene to be expelled from Congress. However, this is easier said than done and requires a two-thirds majority vote. It may come down to censure, which requires a simple majority vote. This would remove Greene from all committees but not from Congress.

The last person expelled from the House was almost 20 years ago when Republican James Traficant from Ohio was kicked out after he was convicted on 10 felony charges, including racketeering. In 2019, however, Representative Steve King was removed from the agriculture and judiciary panels after “wondering out loud” to the media why the terms “white nationalist” and “white supremacist” were problematic. He had also made a range of other, possibly more egregious, comments, including scepticism that pregnancy could result from rape or incest.

Late on Wednesday, Republican House minority leader Kevin McCarthy refused to remove Greene from the committees she has been assigned to, leaving it to the Democrats to make their votes count against her on Thursday. DM