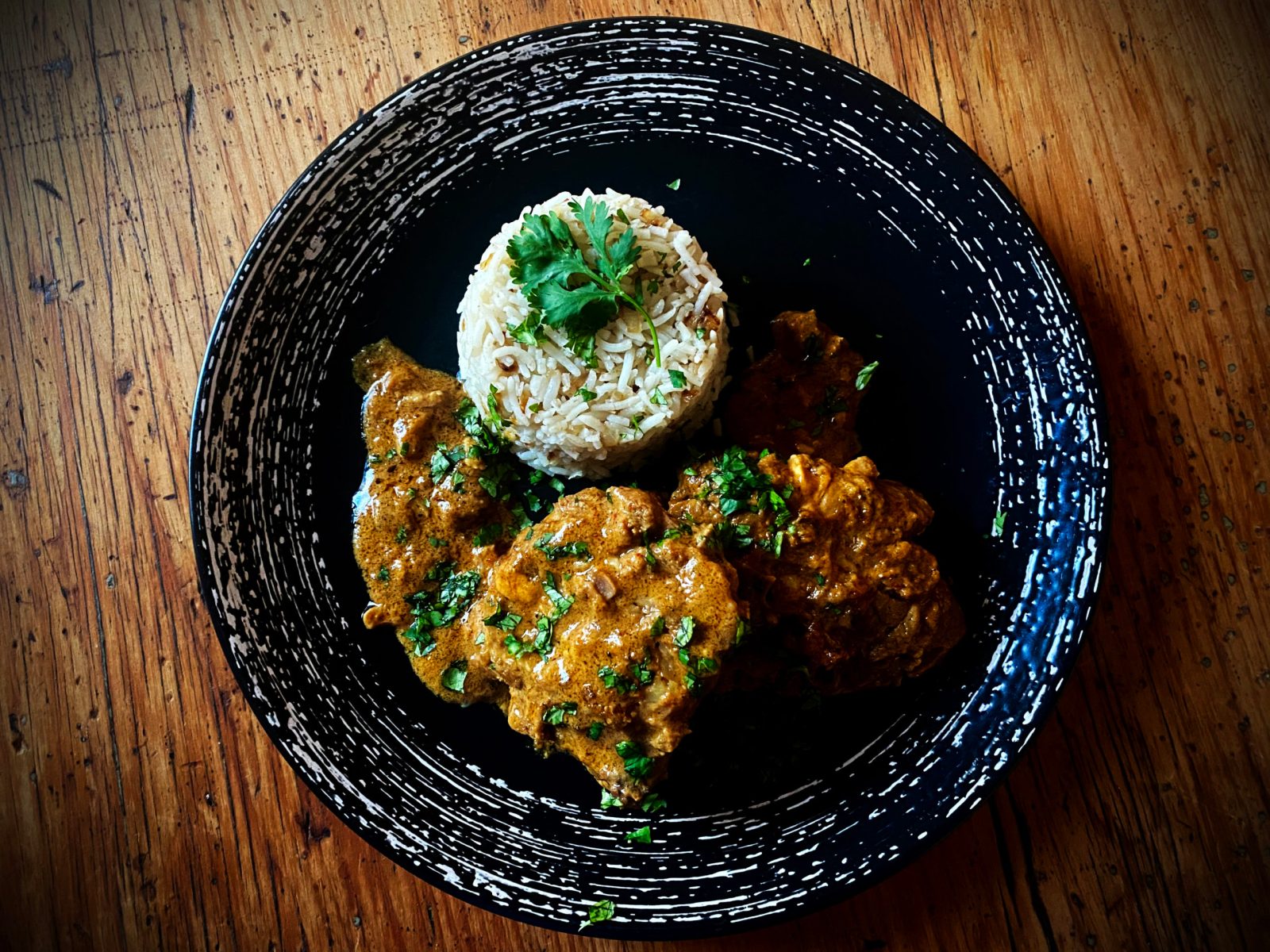 Rogan Josh is usually made with lean pieces of lamb leg meat. But there’s no reason not to break the rules as long as we cook it for long enough for the tougher neck cut to become fall-apart tender.

There are as many recipes for rogan josh as there are Indian cooks who believe their recipe is the right one. Yet they’re all different to one degree or another. This recipe is based on one in The Indian Pantry (Human & Rousseau, 1997) by Monisha Bharadwaj.

Rogan Josh has its origins in Persia, though it is regarded today as an Indian curry. Wikipedia tells us that rogan means oil, while josh refers to heat, so Rogan Josh is a method of cooking a curry involving plenty of heat and oil.

So its name refers to a method, rather than to the ingredients used. In this instance, the key elements are yoghurt and oil, while the core spices are ginger, fennel seeds, cardamom, chilli, and garam masala or, in my case, a rather heady Durban masala. Towards the end, the dish achieves greater depth by the addition of ground almonds.

Grind the fennel seeds, cardamom seeds and chilli flakes to a fine powder.

Add this and the ginger, garam masala and salt to the yoghurt and mix.

Heat oil in a heavy-bottomed pot (preferably cast-iron) with the bay leaves and fry the lamb neck pieces a few at a time until well browned on all sides.

Add a little of the spiced yoghurt at a time and cook on a fairly high heat until the oil splits. Then add a little more spiced yoghurt and cook until it splits again, repeating until all the yoghurt is cooked in. Each time you add more, stir it again for the mixture to coagulate.

Now reduce to a low heat, cover, and leave it to cook until it is very tender, at least an hour and a half, probably two hours. Turn the meat now and then to make sure it cooks evenly and is coated with the yoghurt stock. There will not be a great amount of cooking stock, and that’s as it should be, hence cooking on a very, very low heat, covered, for all that time. It’s all about the flavour and the richness of that delicious spicy yoghurt.

Stir in the ground almonds before serving with Basmati rice, garnished with chopped coriander. DM/TGIFood