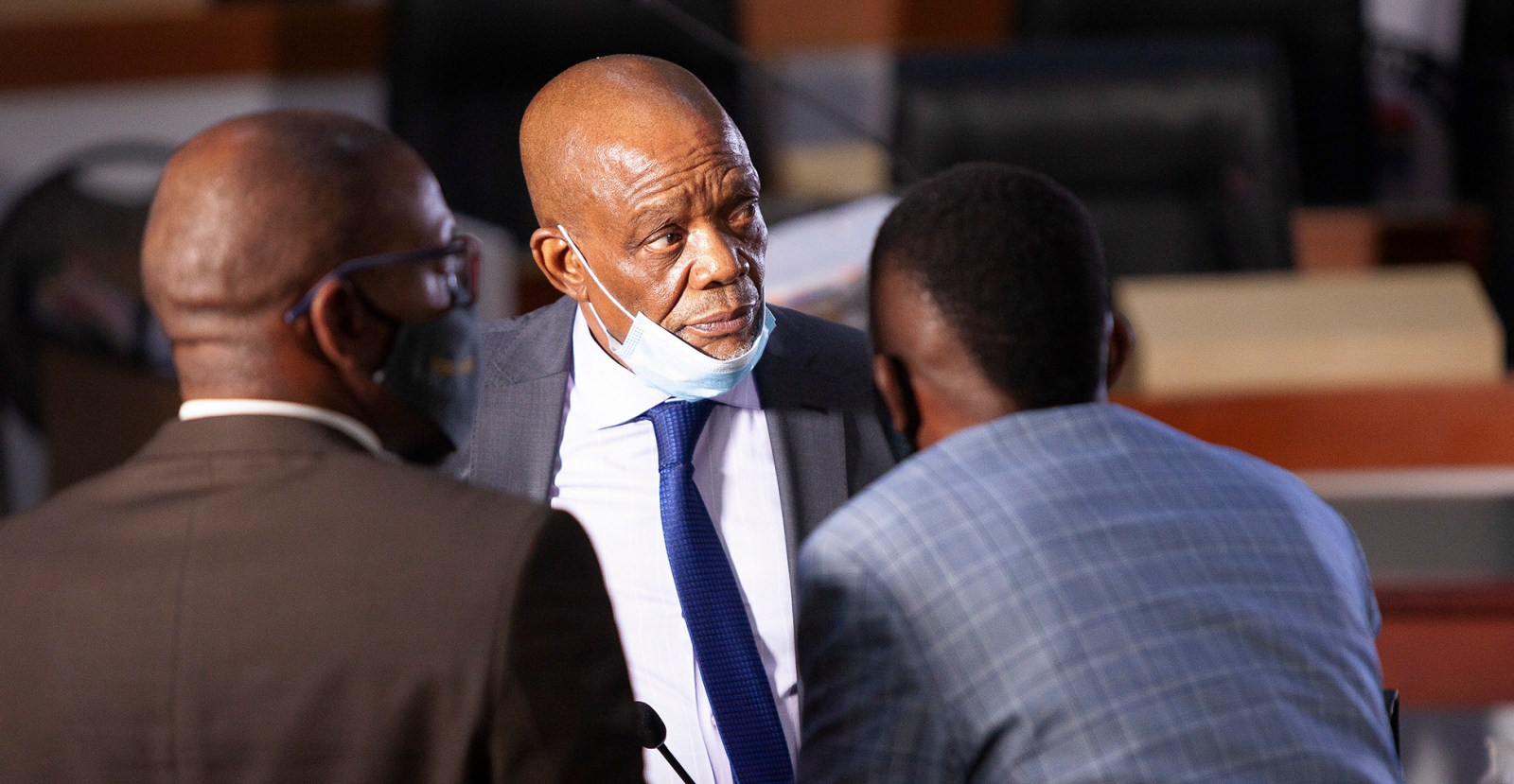 The suspension of North West Premier Job Mokgoro’s ANC membership stems from the claim that during a vote for the “chair of chairs” of portfolio committees in the North West Provincial Legislature he voted with opposition parties in favour of an open vote – a vote that would not be secret. (Photo: Gallo Images / Papi Morake)

The North West ANC’s Interim Provincial Committee on Friday suspended the party membership of Premier Job Mokgoro and four other members, accusing them of voting with opposition parties. While Mokgoro will retain his premiership, the move reflects the chaos in the governing party.

The suspension of North West Premier Job Mokgoro’s ANC membership stems from the claim that during a vote for the “chair of chairs” of portfolio committees in the North West Provincial Legislature he voted with opposition parties in favour of an open vote – a vote that would not be secret. It was claimed that he had voted in favour of one candidate while the ANC caucus had been told to vote for another.

Both of the candidates were from the ANC, and he said he did nothing wrong, that he was voting for an ANC member against an ANC member and that an ANC member won the position. However, it’s been reported that the Interim Provincial Committee believes he did vote with opposition parties and against instructions when he voted for the vote to not be held in secret.

This was the culmination of a series of conflicting dynamics set in train by Mokgoro’s appointment in the first place. It came in the wake of the unprecedented removal of Supra Mahumapelo as premier of the province in 2018. Subsequently, several days of violent protests, ostensibly against Mahumapelo, rocked the province.

ANC North West: Still crazy after all these years

Eventually, in a slightly strange press conference (this was before Covid-19) ANC Secretary-General Ace Magashule announced, with Mahumapelo next to him, that Mahumapelo was leaving his office.

By then the corruption claims against Mahumapelo were ballooning, and there was an understanding that the province could not continue with him as its premier. President Cyril Ramaphosa said that, “We cannot be proud if a whole province’s governance systems are going to so collapse as to lead our people out into the streets protesting about sewage just spilling into the streets.”

Mokgoro was seen as one of the few people who could take over and govern the province. But internal political centrifugal forces and events are now overtaking him.

The situation in the ANC in North West is a microcosm of the party as a whole.

There are different constituencies led by different people who have different interests, all of them contesting for power.

Perhaps the major problem is that there is a roughly equal balance of power, and all of the contenders have strong power bases, which makes it tough for any of them to get any kind of long-term, winner-takes-all sweep. It is this that has allowed the provincial ANC Women’s League to order its members who are mayors of municipalities not to resign when accused of corruption, despite the ANC National Executive Committee’s edict that people accused of corruption must “step aside”.

In the case of North West, these forces go back long before the removal of Mahumapelo. The problems can be traced back to an incident that occurred in May 2008, when police had to be called after a group of people disrupted an ANC provincial conference at Sun City.

The province has not been able to achieve unity for any lengthy period since then. In 2012 shots were fired at the ANC’s then provincial secretary Kabelo Mataboge.

By 2013, this had cost the ANC control of the Tlokwe Municipality through divisions in the caucus.

ANC’s Tlokwe Trouble – and why it may spell more trouble

It was only after this that Mahumapelo was able to assert some control of the province, which lasted for a short period. During this time he was able to count as his achievements the construction of a statue of then president Jacob Zuma, which was unveiled in October 2017, just ahead of the ANC’s Nasrec conference.

The problems in the province reveal how difficult it is to resolve any of the divisions. Mokgoro may be correct when he claims, as he did to News24 that, “All I know is that I’ve been attacked and targeted since the day I was appointed premier.”

It’s obvious that there is a fight for political power and control of the province. It is a fight that cannot be resolved easily. Luthuli House now has to consider its options.

To allow the interim provincial structure to suspend a sitting premier would surely be a step too far.

There is a strong possibility that this will open the door for the Deputy Cooperative Governance Minister Obed Bapela to become the new premier. He is the convener of the ANC NEC’s task team in the province. There has been informed reporting from the Mail & Guardian that he has ambitions to take over.

However, even if he, or anyone else, were to do this, it would not resolve any of the longer-term problems.

North West is a province that gives the impression that service delivery has fallen apart. It appears that the political elite there are too interested in their own battles for power to concentrate on improving the lives of voters in the province.

It is another example of what might be called the “Balkanisation of the ANC”. It reveals how there is no political centre in the party.

It also reveals how the biggest threat to the ANC comes not from any external political force, but from the divisions within  – and that the party is no longer a coherent political force. DM