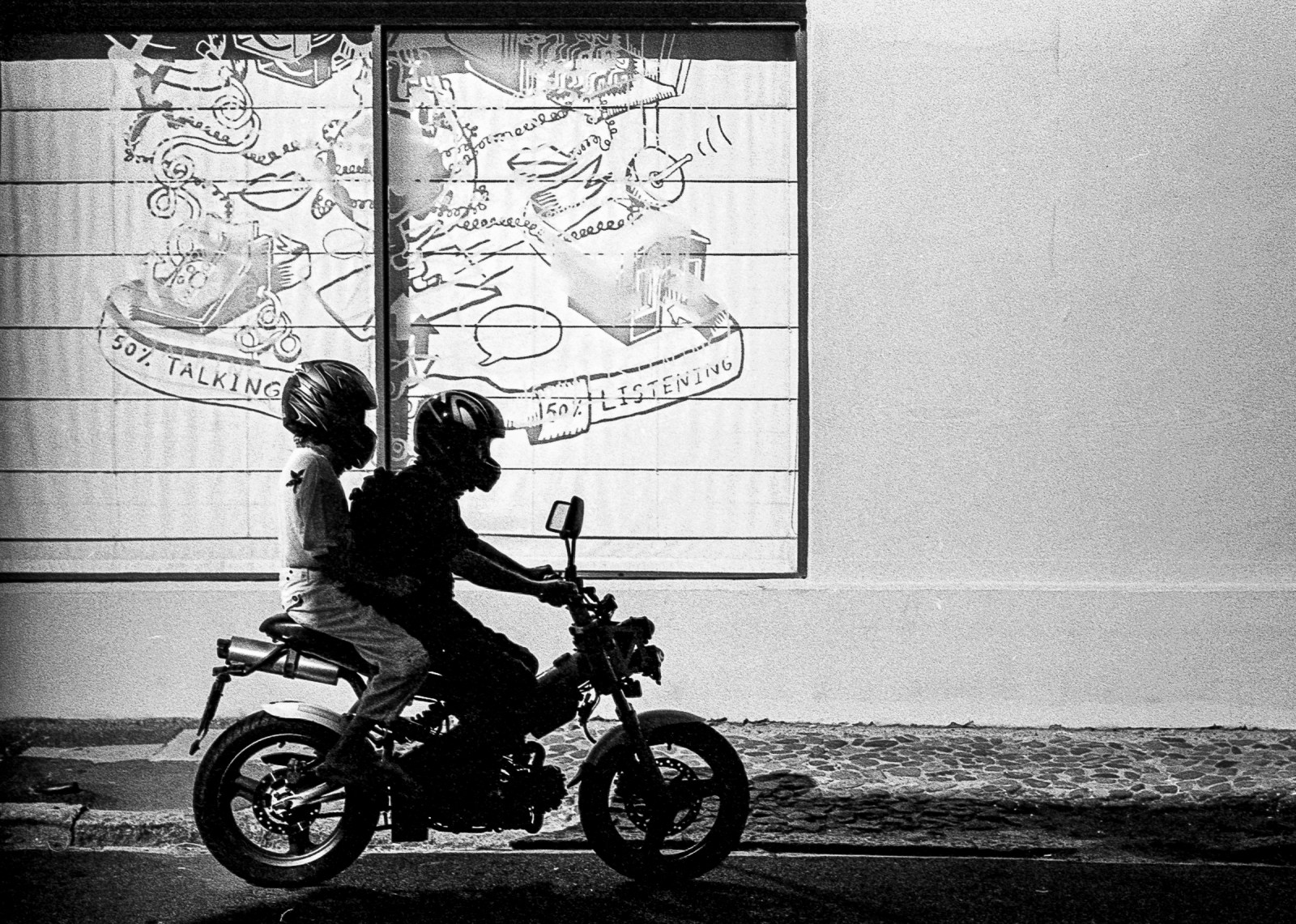 An electrical engineer by profession, Dave Harker has discovered a passion for the world of black-and-white film photography – with incredible results.

“I grew up in a very strange way,” says Dave Harker. He is sitting in his house in the southern suburbs of Cape Town, talking about the meandering journey that led him to where he is now. He shares the story in a gentle, confident manner, with a kind and compassionate regard for everyone he met along the way.

His father was a woodworker who installed cupboards and his mother a furniture saleswoman. The family, consisting of Harker and his sister, grew up in a middle-income neighbourhood, nestled between Gugulethu and the rest of the Cape Flats.

“My father started off installing cupboards in the rich neighbourhoods, such as Constantia and Rondebosch. But then he decided to cater to people in the townships and to build nice furniture for them. And he never advertised a day in his life. It was all word of mouth, through people in the townships. Working for him was my first exposure to township life.”

When Harker had to go to school his parents sent him to a private school, the only top-quality school that would accept coloured students such as Harker, until it became unaffordable. He moved to a Model C school in Pinelands where he experienced horrific racism and only stayed a year. He finished primary school in Mitchells Plain, in the heart of the Cape Flats, where his uncle was the headmaster.

“At the private school I was mingling with kids that were really well off and at Mitchells Plain with kids that didn’t have food to eat during the lunch break. Looking back, I feel so fortunate to have experienced those two extremes, because it gave me a better understanding of the dynamic of what South Africa is about,” he says.

During his studies towards a degree in electrical engineering at the Cape Peninsula University of Technology, Harker worked part time in a music shop in central Cape Town, selling vinyls. He attended university during the day, worked in the evening and got home by taxi long past midnight.

“The job moulded me. I met people from all different cultures, because music really brings people together. And I found certain genres of music draw different types of people. Now, when I reflect, I feel so fortunate to have experienced that because I can understand the mom and dad working late at the restaurant, going home late at night. It gave me a good insight into people who genuinely struggle.”

Listening to his story, it’s clear that Harker’s interaction with the many different facets of South Africa had a direct impact on his photography. Growing up at the intersection of predominantly coloured and black neighbourhoods, while attending a variety of schools with vastly different students, Harker is perhaps uniquely equipped to understand and capture the notoriously complicated social dynamics of our country.

“I want to shoot someone in their natural environment, going about their everyday life in their daily environment. It’s not always safe to go shoot out in the streets. But my path has moulded me and allowed me to blend in on the street or become one with the locals. I grew up playing sports in the street, going into the township, and the Cape Flats, frequently with my dad.”

Harker embarked on a successful career as an electrical engineer, which he has pursued for almost two decades. He is also an avid surfer, husband and father to a four-year-old. But his work ethic and love for all things creative have not subsided. He fulfils his creativity urges through building furniture, in addition to photography.

“Photography really helps me to explore my creativity with no pressure, which allows me to enjoy it. With engineering, it’s either right or wrong. In the arts there is no right or wrong, it’s all subjective. It’s you as the viewer, or the consumer, and how you perceive the piece. It’s how you look at the photograph and what you take away from the photograph. With furniture, it’s the way your eyes fall onto the piece, how you sit in a chair and how comfortable you feel in it. That’s why I’m pushing to do these creative projects.”

His amateur photography career happened almost by accident. He bought a digital camera in the 2000s and used it a bit, but eventually grew bored. Then, he bought his wife a film camera in 2016 as a birthday gift, and it was the perfect gift – not for his wife, who barely touched it, but for Harker. “My wife wanted nothing to do with the camera. She just smiled about it and pretended she liked it. But I found myself gravitating towards this camera, and I started playing around with it. I never looked back once I picked that camera up.

“My idea about photography is not just about taking photos, it’s about talking to people on the streets and listening to their stories. Taking the snapshot is just one part of it, it’s about connecting with people and shooting people in their natural environment.”

His photographs are all black-and-white film shots, which “allows me to slow down, to really think about the shots that I’m shooting. I’ve only got 36 chances to tell that story. I’m looking for that moment, I’m looking for the right light for the story. Black-and-white also works well for street photography. It highlights specific areas of the shot; it makes it easier to get the viewer to focus where you want them to focus.”

One of Harker’s main series of photographs, Finding Woodstock, about the gentrification of Woodstock, was exhibited in a small local coffee shop in the neighbourhood. “I immersed myself in the thick of Woodstock, walking the streets, chatting to people, going into people’s houses; they accepted me walking in their neighbourhood.” He has also exhibited at the Analog Photographic Festival in Barrydale, and at the Future Nostalgia exhibition at Cape Film Supply.

Another 24 Hours deals with everyday life during an extraordinary year as South Africa navigated the Covid-19 pandemic. The images capture a range of South Africans working, shopping and trying to survive in a year marred by suffering and hardship for so many.

The mask, a symbol of the pandemic, is found in photo after photo. The images are striking and capture the essence of the brutal, beautiful and chaotic scenes we all experience daily, distilled into single, enduring black-and-white images.

Towards the end of the interview Harker nostalgically talks about his father again, who passed away 14 years ago. “I didn’t want anything to do with my father’s woodworking business. But I was forced to go work in the township and clean up after him. I hated it. I only started building furniture after he passed away. And now I’m quite upset with myself, disappointed in myself, that I can’t fall back on him and ask for his advice.” DM/ML