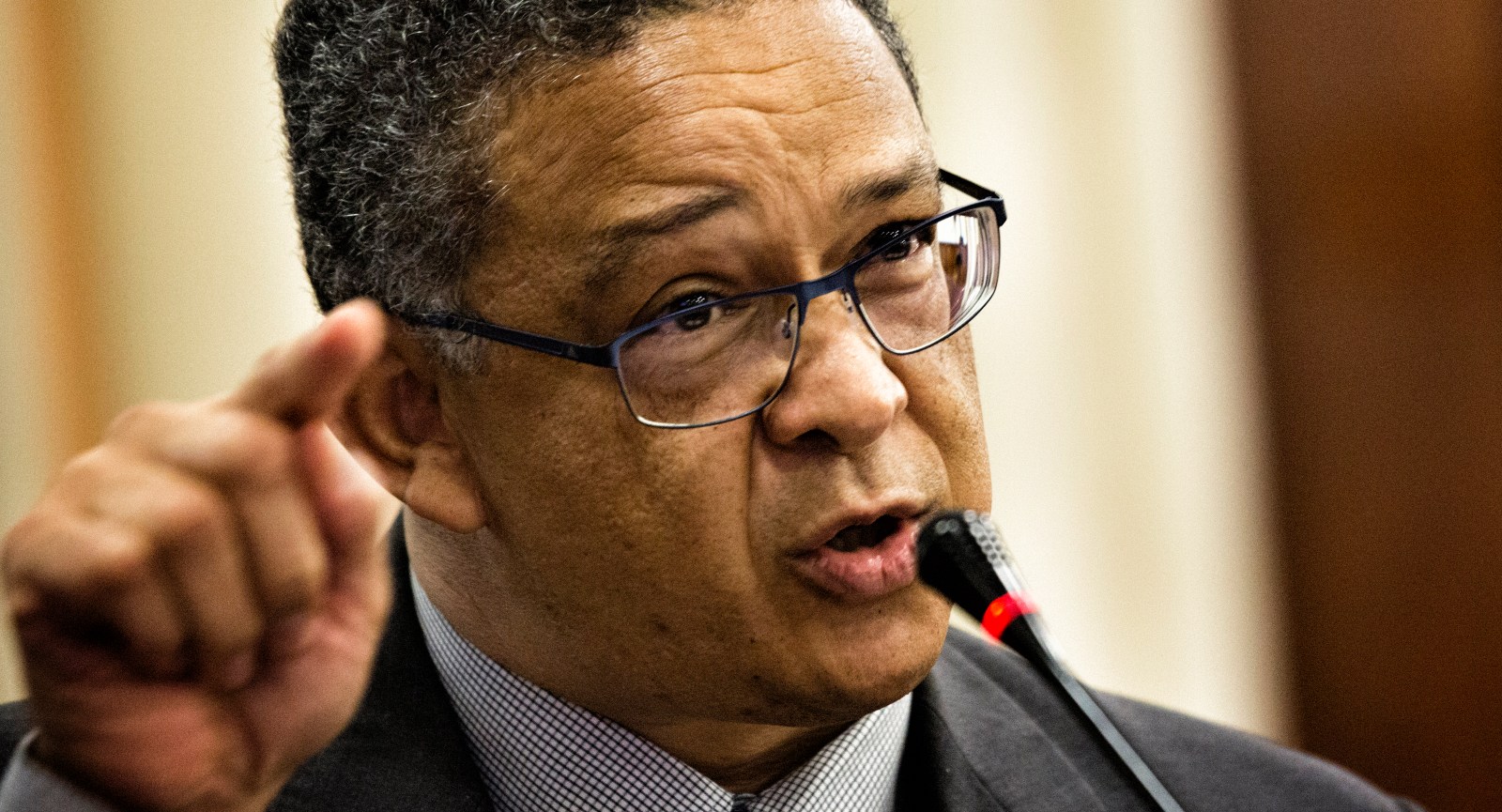 The Pretoria High Court judgment is scathing of top SAPS brass and how they attempted for three years to avoid accountability.

A scathing judgment handed down in the Pretoria High Court on 13 January 2021 has revealed that the SAPS top brass may have attempted in 2017 to illegally procure an eavesdropping device at the inflated price of R45-million to protect the interests of the ANC and not the Republic of South Africa.

It was alleged intelligence received that same month of a possible “national threat” of some “magnitude” and passed on to then-president Jacob Zuma by “a minister in the security cluster” that had prompted the secret emergency procurement, SAPS admitted in court papers.

This alleged threat was never disclosed.

These papers offer the first real glimpse of what went down behind the scenes at the Courtyard Hotel in Arcadia, Pretoria, in December 2017, only days before the ANC’s fraught elective conference at Nasrec which saw Cyril Ramaphosa win by narrowest of margins.

Davis’ ruling that the documents be declassified will enable IPID, now headed by Jennifer Ntlaseng, to properly investigate what could prove a politically scandalous bombshell for a faction within the ANC.

It could also end the careers of top SAPS members.

Davis’ ruling, while it puts an end to the vigorous three-year push-back by SAPS against legitimate attempts by IPID (then headed by Robert McBride) to obtain documents relating to the attempted procurement, leads now to even greater and more urgent questions including whether the ANC attempted to divert public money from the state to fund or swing a party result and whether senior SAPS members attempted to aid and abet this.

SAPS consistently refused to declassify documents related to what has been termed the “grabber” procurement as well as two other dodgy deals by SAPS Crime Intelligence, headed then by Zuma-appointee Brigadier Bhoyi Ngcobo.

The papers reveal IPID had found that senior members of Crime Intelligence had indicated that the transaction for the grabber was being “pushed” by Ngcobo and that “no need existed for the procurement of the device”.

There was, in other words, a need to release R45-million.

All those at the clandestine meeting on 13 December 2017 have refused to account for their presence. They have all consistently maintained the matter related to the “national security” of the Republic of South Africa.

The meeting was caught on the hotel’s CCTV cameras when IPID and McBride received a tip-off. After McBride contacted National Commissioner Khehla Sitole, the payment to I-View, a company whose director is Inbanathan Kistiah and which was in business rescue at the time, was blocked.

Also at the meeting was Bo Mbidwane, Minister of Police Fikile Mbalua’s adviser.

Only Sitole, Vuma, Tsumane and Mbindwane feature in this High Court matter as it was they who challenged IPID’s approach to a magistrate’s court to obtain subpoenas forcing SAPS top brass to assist the IPID investigation.

While Sitole, Vuma, and Tshumane all argued that the matter related to “national security”, IPID argued that it was a procurement matter that could not be classified to cover up potential criminality.

This was a view confirmed in law by Davis who described attempts by SAPS to dodge declassification as “obstructionist” and unjustified.

“There is no lawful or justifiable reason why access to the relevant documents should not be given to IPID and, if declassification is necessary to effect such a process, it should be done,” said Davis.

Vuma, who Sitole recently ordered to investigate now suspended Crime Intelligence head Peter Jacobs, has since been implicated in a R200-million SAPS PPE procurement spree under investigation by the DPCI and the SIU.

Sitole vs Jacobs: what lies behind the top-level rupture at the SAPS?

Jacobs, who was notified of an intention to suspend him for alleged PPE procurements from the Secret Service Account in November 2020, has said in correspondence to Sitole that he was being targeted because he was investigating fellow officers.

In fact it was Vuma, in her court papers, who set out the most comprehensive view we have to date of events in the build-up to the ANC’s fraught elective conference.

In her submission, Vuma revealed that the instruction to investigate an alleged “possible national security threat” came from Zuma, then still president of the ANC and the country, after he had been briefed by the “the minister from the security cluster”.

“During December 2017, there was information received about a possible national security threat, which threat was associated with the ANC National Conference that was to be held in Johannesburg.

“The Minister from the Security Cluster then briefed the Presidency about the threat. Then the Third Applicant, The National Commissioner of Police tasked me and the Second Applicant [Tsumane] to deal with the threat further.

“One service provider who would be able to deal with such a threat of that magnitude was identified by stakeholders in this field of intelligence gathering.

“Then on 13 December 2017, a meeting was convinced to deal with amongst others, the threat and the procurement of the necessary equipments (sic) and services to deal with the threat.

“I pause here to mention that the details that lead to the meeting and of the said meeting amounts to intelligence information that might compromise national security and the identities of the operatives of the intelligence community,” Vuma set out in her affidavit.

Davis said that Vuma’s explanation had a number of “fatal flaws”.

While her affidavit clearly dealt with the aborted attempt to access R45-million which formed part of I-View II — the grabber deal — she had mentioned nothing about I-View I or I-View II which related to the procurement of equipment to monitor the EFF during Fees Must Fall protests as well as an inflated tender for bulletproof vests from the same company.

Vuma did not even claim secrecy, said Davis in respect of other investigations.

“The explanation furthermore fails to disclose either a link or a distinction between the interests of the ANC and its National Conference and a ‘national security threat’ ” said Davis.

Similarly, no cogent explanation had been given by Vuma as to why the procurement process of a cellphone grabber “from a known company would compromise operatives in the intelligence community”.

Vuma did not even try to engage with the contents of the affidavits of two brigadiers, Hlungwane and Chilli, who tipped off IPID, said Davis, adding “there are so many procurement irregularities already disclosed in IPID’s affidavits that more and cogent reasons for classification are needed than the mere bald say-so of Lieutenant-General Vuma”.

For information or documents to qualify as “national security intelligence” contemplated in the National Strategic Intelligence act, these needed to “relate to any threat or potential threat to the security of the republic”.

“Even if a threat existed, the manner in which the grabber was to be acquired is something distinct from the threat itself,” said Davis.

Davis correctly asked what happened to the supposed threat of great magnitude after the deal had been called off.

Vuma had on no fewer than 13 occasions repeatedly cited the Intelligence Oversight Act while the other respondents had done so eight times. They all maintained that only the Joint Standing Committee for Intelligence (JSCI) could declassify the documents and that IPID should “follow procedure”.

The section of the act that Sitole, Vuma, Tsumane and Mbindwane had relied on, suggesting only the JSCI could declassify documents, had been “misplaced”, said Davis, as this section applied to the committee itself and documents “they have obtained in the performance of their functions”.

“It clearly does not provide for a requirement that the JSCI or its chairman need to declassify a document to determine whether to grant a person outside the JSCI access to such documents when access is sought from an institution, in this case, IPID,” said Davis.

The judgment reveals that IPID further found that gross procurement irregularities had occurred in another procurement from I-View which had taken place between 20 December 2016 and March 2017.

Another system, Daedalus, which had cost R21-million, was also procured from I-View which had been under business rescue at the time.

Davis ordered that the “refusal or failure of the National Commissioner of Police to declassify documents requested by IPID for the purposes of its investigation be reviewed and set aside”.

Sitole was ordered to “immediately take all necessary steps to have the documents declassified” for the purpose of IPID’s investigation “and any consequent prosecutions”. DM