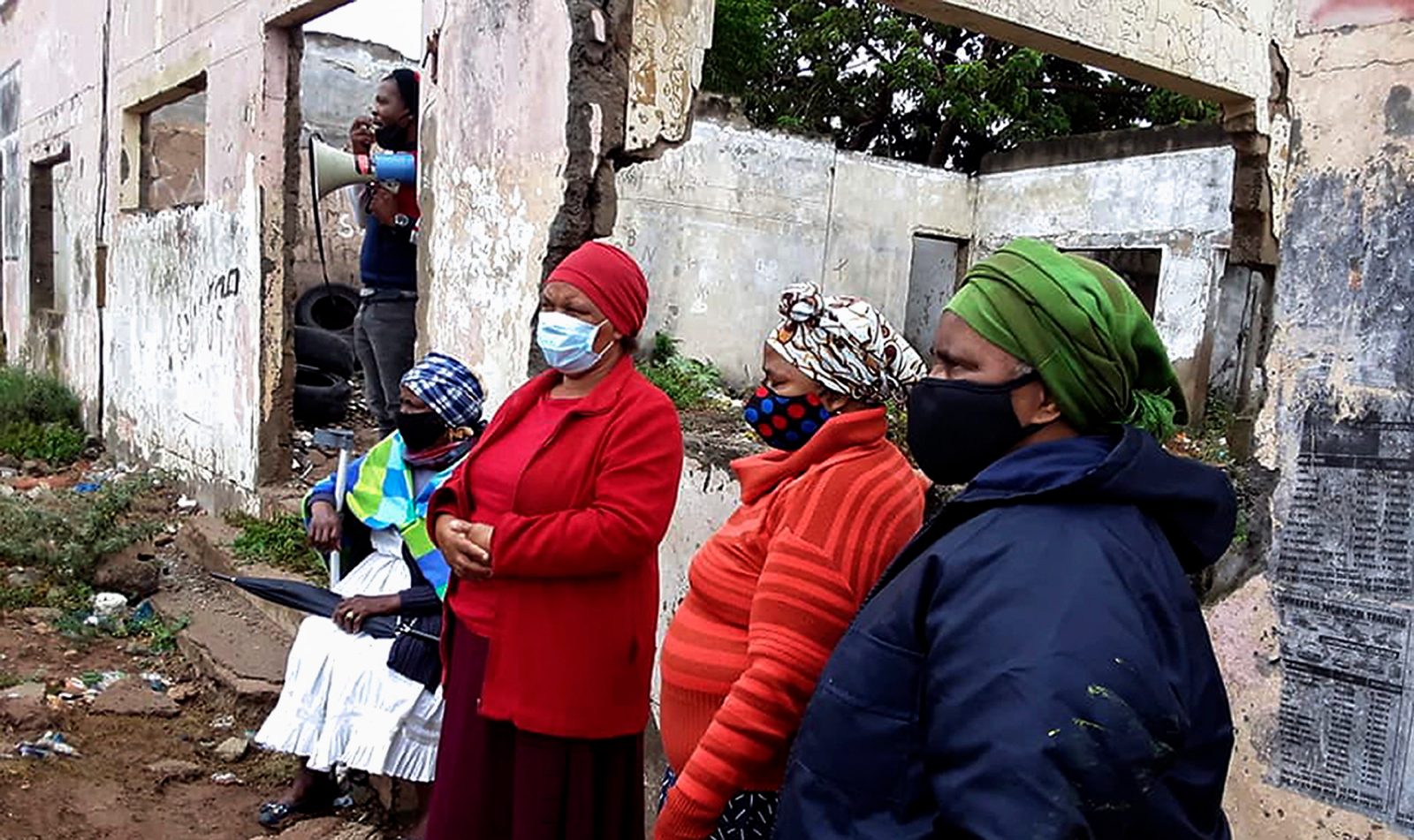 After getting no response from the Nelson Mandela Bay municipality, residents of Kwazakhele have started breaking down a derelict building that has been housing criminals and become a health hazard. (Photo: Supplied)

The Kwazakhele community on Saturday began breaking down a house they initially wanted to become a youth development centre. Drug addicts had moved in and it became a lair for criminals. Community leaders who asked the Nelson Mandela Bay municipality for help say they have been ignored. While the protest began with the residents of two streets, a crowd of more than 300 had joined by Sunday afternoon after another five break-ins in the area.

On Saturday, after a young woman died of a drug overdose, community members abandoned months of talks over a derelict house they had wanted to be converted into a youth development centre and set the place on fire.

The house, on the corners of Dalindyebo and Khama Streets in Kwazakhele, was abandoned a few years ago and, fed-up residents say, has become a hotspot for drug deals and a hideout for criminals.

The community first raised its concerns with the municipality in a series of emails sent months ago, explaining how the derelict house was used by young drug addicts, had become a hiding place for robbers and a dumping ground for dead dogs and the foetuses of unborn babies.

Next, the issue was raised at Integrated Development Plan meetings.

Next, the homes of residents who lived close by were broken into, as was the next-door doctor’s surgery and a funeral parlour.

On Thursday. 40-year old mother Cherylene Charlie was robbed of R400 and her phone while she waited for a taxi to take her to Home Affairs as she needed a temporary ID.

“I am not working. That was all the money I had,” she said.

“When you have to pass that house you put on five pair of jeans so they can’t rape you,” she said.

“I live in the street. I have two children.

“On Thursday I left early to go to Home Affairs. It was around 5am. As I was waiting for the taxi, men with balaclavas just jumped out of the building. They had knives. They took my phone and they took my money and they got away with it. There are always people sitting in that building and using drugs. I fear for my children.

“After every weekend, you can see the blood on the pavement in front of that house. The people who hid there, they even broke into the hair salon. Their parents say they will buy back what was taken, but now we have decided to take the law into our hands. We will go to prison for being robbed relentlessly.

“Often we wake up at 1am to hear the police looking for people at that house. Once a guy was robbed and tied up in the house. The police came and they found the robbers in the house. It was around midnight. They ran, but the police van wouldn’t start. We had to run after the criminals ourselves.

“They are dumping things in there. Terrible things. The women in this street once tried to clean that place, but it was too horrible.

“Now it is becoming worse. We are fearing for our lives. You sleep with one eye open.”

Community leader Thembisile Nogampula said they had wanted to change the building, that in its heyday was used as a ballroom dancing studio, into a youth centre.

“It was never followed up on,” he said.

Now the house has become a place where drug deals are openly taking place.

“We are preparing for a funeral of a young woman who overdosed on drugs she got at that house,” said Nogampula.

“The councillor just said she will forward our email, but was scared of making any promises with regard to the building,” he said.

“People are selling drugs from there. You see the different cars coming there. We also spotted the drug addicts going straight there. These cars are dropping something. We have seen small girls, maybe 14 or 15 years old, going into that building at night. We don’t know what they are doing there. People are being robbed here at night. They also rob those who leave early for work. The robbers hide in the building. We found one of the mentally ill patients in our neighbourhood there. He was dead.

“The thieves hiding in that house, they broke into my house too and at the house next door and also at the funeral parlour in the street.”

“We don’t have time to prolong this thing,” he said.

Last week the community met a number of times to discuss a plan of action and on Saturday began dismantling the building.

“We want this building down — we are not negotiating about that,” Nogampula said.

He said they had previously been told that they had to wait 14 days after the owner was given notice to clean up the property. “Those 14 days ended on 30 December,” he said.

“Now they are keeping quiet and nobody is responding.”

Nogampula said businesses in the area had donated money to help them demolish the building.

“People are angry like hell. We already burnt more than 50 tyres. They are lucky that we have not yet started putting our tyres in the road. We have no more appetite for what the municipality is saying,” Nogampula said.

Late on Friday, the municipality assured community leaders that they “will apply for a certificate” to demolish the building.

According to this email, municipal officials conducted an inspection late in December 2020 and agreed that the structure was dilapidated, dangerous and beyond repair.

“Kindly be advised that our sub-directorate will file an application for a demolishing certificate at the local Uitenhage Building Inspectorate Unit for assistance in terms of the National Building Regulations for compliance in this regard.”

Nogampula, however, said this was not good enough.

“A family is preparing to lay to rest their daughter who was a victim of criminals hiding in that building.

“What is the municipality investigating?

“The municipal officials were here. They saw the drugs being dropped off. We never see any action — everyone just enjoys their fruitless boardroom meetings.”

“We have now taken matters in our own hands… This building affects us all, big time. I am afraid of what will happen next. We tried engagement. But it didn’t work.

“We will only stop when this building is down and the place has been cleaned. We tried, but we just saw fruitless boardroom outcomes,” he said.

After another five break-ins in the area targeting churches and a hair salon, a crowd of more than 300 residents joined the residents of Dalindyebo and Khama streets to continue breaking down the house.

“They want to join us and finish what we started,” Nogampula said.

Nelson Mandela Bay municipality spokesperson Mamela Ndamase said inspectors said the building is an old business site which had been abandoned and is now run down and dilapidated.

“The building was found to be unkept and in a state of disrepair and the recommendations were that a demolition certificate be applied for. A memo was thus drafted to the director of building control in Uitenhage to expedite a process of acquiring a demolition certificate for the property in question, as it is dilapidated beyond repair. A follow up meeting was arranged on Friday and the [community] was also contacted telephonically to outline the work done so far.”

She said they were applying for a demolition certificate, but this would take some time as there were steps that had to be followed.  DM/MC