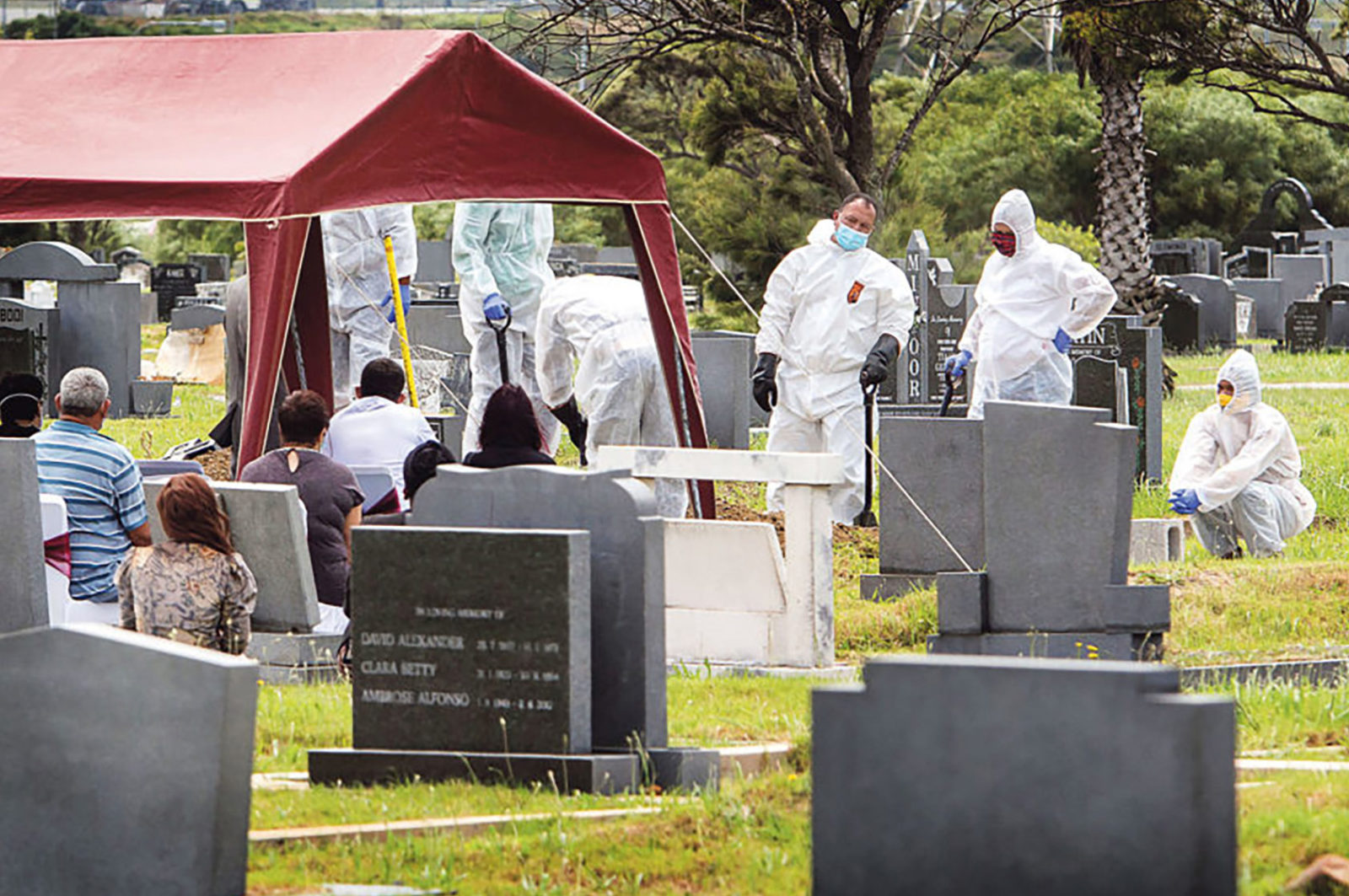 The funeral of a person who died from Covid-19 under way in Gelvandale cemetery. (Photo: Donna van der Walt)

For more of us, the statistics are no longer just numbers. Increasingly, those numbers are morphing into the faces of those we love: family, friends and colleagues. The statistics now have names – names of those closest to us who have contracted the virus, who are fighting it, who have recovered from it and those who, heartbreakingly, have died from it. Names we recognise.

It’s not the selfies posted on social media of our artisanal bread-baking attempts of the first wave. Or the tracks in the garden where we stamped down the grass as we tried to keep up our 5km a day run/walk during the hard lockdown. Or the faces of our children attending school via online learning across the table from us as we checked into our Google Hangout meetings for work.

No, this second wave with its variant coronavirus is not hiding its horrors any more.

For more of us, the statistics are no longer just numbers. Increasingly, those numbers are morphing into the faces of those we love: family, friends and colleagues. The statistics now have names – names of those closest to us who have contracted the virus, who are fighting it, who have recovered from it and those who, heartbreakingly, have died from it. Names we recognise.

It is the smiling, welcoming face of Solly Maphumulo, an investigative journalist who succumbed on 12 January after a short battle against the unseen virus. Solly was a true mensch.

As her friends, we remember her determination and tenacity. As a student journalist, she caught lifts from KwaZulu-Natal truck drivers to The Star in Johannesburg, just so that she could gain reporting experience. “She was determined and often got the story because she sat on the pavement outside a house long after the more experienced journalists had gone home,” her former news editor and friend, Cecilia Russell, recalled. Solly had a gung-ho, never-give-up attitude and was able to get under the skin of those she interviewed, ultimately giving a voice to those otherwise silenced. She was a beautiful soul, a soul gone too soon.

It is the heartbroken face of a high school friend whose partner, a deputy school principal at a Pietermaritzburg high school, fought but ultimately lost a lengthy battle against the infection raging within his body.

It’s the face of my father, his faith taking the place of fear, praying fervently for the healing of his octogenarian sister. Covid-19 restrictions meant that he could not do so from her bedside as she took on the battle that only she could physically fight. It’s the relief on my dad’s face and those of his sister’s children as doctors told them she could go home.

It’s the face of a husband sitting with a mask on, across from his wife and son in their own home, as he keeps watch over them, wondering how – despite travelling in one car for hours – they test positive and he does not.

It’s the fear etched on a daughter’s face as she hears that her parents have received a positive Covid-19 test result.

It’s the tear-stained face of the man who learns that, despite signs of improvement, his cousin is no more.

It’s that of the doctor working long hours without the proper personal protective equipment, facing overcrowding, increased pressure and poor working conditions, and who, during a single shift, had to sign death certificates for 15 people. All 15 died from complications associated with the coronavirus.

Until such time as an effective vaccine is available to large numbers of South Africans, Covid-19’s face is going to become increasingly real to more and more of us. It is no longer going to be something that happens to other people, that’s an inconvenience in our daily lives.

By Wednesday 1,278,303 (that’s one million, two hundred and seventy-eight thousand, three hundred and three) people had contracted the virus. A total of 806 of those succumbed on that day alone.

Don’t let your eyes glaze over when you see these numbers. Each one of them represents someone’s Solly, someone’s partner, sister, wife, cousin, friend.

Don’t lift your hands up in defeat. Or be bamboozled by the charlatans who would have you believe that Covid-19 is no worse than the yearly flu or that the vaccine will contain microchips to track you.

Right now we all have the same non-pharmaceutical interventions to fight against transmitting the coronavirus to each other. Use them.

Don’t wait until that face is familiar to you before you act. DM168

Jillian Green is a managing editor at Daily Maverick.