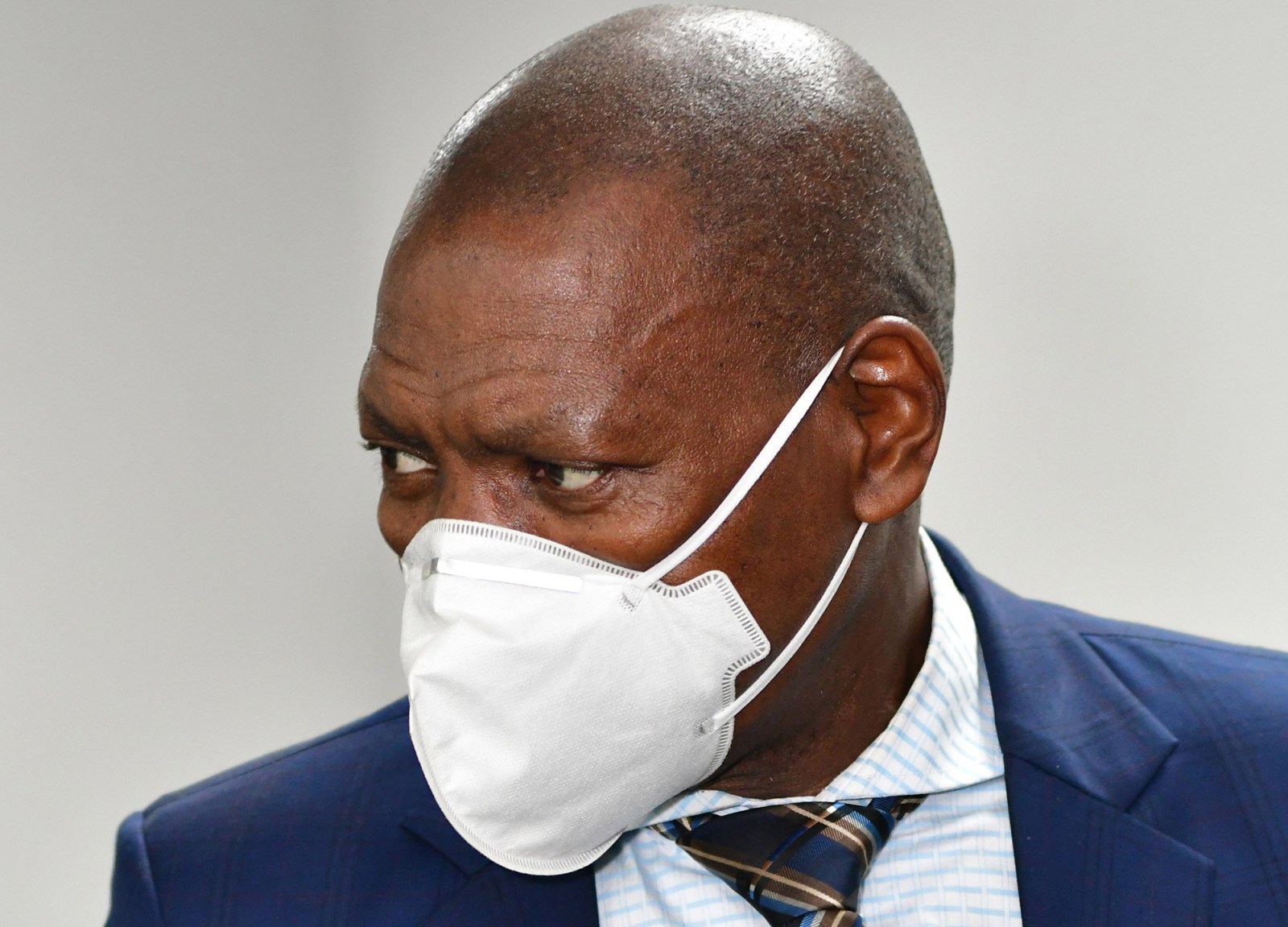 Minister of Health, Dr Zweli Mkhize visits Clairwood Hospital ahead of the expected peak in the Province on August 06, 2020 in Durban, South Africa. According to a media release, the Minister will visit a few COVID-19 facilities across the province and sit down with Provincial and District management in an attempt to better understand challenges faced by the province. (Photo by Gallo Images/Darren Stewart)

The South African government is adamant that it must vaccinate 67% of the population to achieve herd immunity – roughly 40 million people. Just one problem – there aren’t enough adults in the country, and the vaccines haven’t been tested on children.

Minister of Health Zweli Mkhize has repeatedly said that the Covid-19 vaccine will not be mandatory.

But in order to reach the minimum threshold required for herd immunity, the reality is that every adult in the country will have to be vaccinated – and some teenagers too.

A demographer who did not wish to be named in this context told DM168 that the total adult population of South Africa – in other words, those over 18 years of age – was roughly 39,2 million. The government needs to vaccinate about 40 million people in order to break the cycle of Covid-19 transmission.

The Department of Health confirmed that 40 million was the figure it was aiming to vaccinate. Spokesperson Lwazi Manzi told DM168 that 67% of the population needed to be vaccinated to achieve herd immunity. This worked out to about 40 million people to vaccinate.

In the presentation Minister Mkhize gave to Parliament last week on the vaccine rollout, it specifies that vaccinating children is “currently not recommended”.

But with the total adult population of South Africa not reaching the 40 million mark, while potentially millions of those adults refuse to be vaccinated, the question that arises is: who will be vaccinated to make up the missing numbers?

“None of the vaccines is currently authorised for children,” Wits professor of vaccinology Shabir Madhi told DM168. “Vaccine studies on children are currently starting and will only be available in a few months. It is unlikely that any countries will be targeting children for vaccination.”

Madhi says he has been trying to draw attention to the vaccination number discrepancy in vain.

“I have been saying the same thing: that you would have to vaccinate 110% of South Africa’s adult population [to reach herd immunity]. It is simply never going to materialise.”

Although South Africans are being reassured that they can opt out of the vaccine, this would seem impossible in terms of the numbers required.

That this is likely to become a major issue is evident from the growing volume of local anti-vaxxers: a diverse group made up of religious Christians and Muslims, QAnon followers and conspiracy theorists, radical Africanists and those who simply do not trust the government.

On anti-vaxxer groups on social media monitored by DM168, certain false ideas about the Covid-19 vaccine are repeatedly spread: that the vaccine is the brainchild of Bill Gates and is intended to kill off Africans; that the vaccine is being used to sterilise men without permission; that the vaccine can genetically modify DNA; and that the versions of the vaccine being distributed in the developing world will be fatally different from those administered in the West.

Multiple different polls have now found that roughly half of South Africans claim they will refuse to take the vaccine. This week, a survey of 3,000 people by gig technology company M4Jam revealed that only 38% said they were willing to be vaccinated as soon as possible.

Head of the South African Vaccination & Immunisation Centre, Professor Rose Burnett, told DM168 that there was evidence to the effect that vaccine scepticism had been growing locally over the past few years in tandem with the growth of social media. Burnett stressed, however, that in general terms, “the vast majority of South African parents from poor communities really value vaccination very highly, and want their children to be vaccinated”.

A matter of increasing concern to health experts has been the unhelpful involvement of local politicians in the Covid-19 vaccine debate.

The Pan Africanist Congress this week released a statement claiming that the vaccines have been developed too hastily to be safe, and suggesting that “our scepticism about vaccines reflects the resounding instinct of most, if not all, Africans”.

This is a common complaint. “From the outside it may seem that [scientists] have rushed the job [of vaccine development], but the public doesn’t really appreciate the amount of work going into clinical trials,” says Professor Madhi. “The studies have been large enough to pick up even uncommon side effects.”

Politicians from the African Christian Democratic Party, National Freedom Party and United Democratic Movement, meanwhile, have tweeted endorsements of bogus immune cures and the controversial drug Ivermectin. Economic Freedom Fighters (EFF) leader Julius Malema has taken a strong pro-vaccine stance, however, lashing out at “unscientific and illogical” criticism of the vaccine at a press conference on Thursday.

“Vaccines have played a critical role in eradicating disease throughout the history of humanity,” Malema said, later adding: “We will never win this war [on] corona if we are going to denounce science.” While he spoke, a stream of EFF supporters on the group’s Facebook page expressed disappointment with Malema for speaking out in favour of the vaccine.

If anywhere near the number of people targeted by health authorities are to agree to be vaccinated, it is clear that a massive and rapid education campaign about the vaccine will have to be rolled out as soon as possible.

Health spokesperson Manzi told DM168 that the department had begun meetings with traditional leaders, unions, civil society and community leaders “to empower them with knowledge to impart [to] and empower the people”.

In addition, “all communication channels will be employed by ourselves as government to communicate directly with the people”.

Professor Burnett said the most important step authorities could take may be building public trust in government, which “right now is probably the lowest it has been since the era of Aids denialism”. If the public trusts the government, people are more likely to trust the vaccines they are offered, Burnett suggests.

Health experts canvassed by DM168 this week were adamant that making the Covid-19 vaccine mandatory was a bad idea.

The government’s chief Covid-19 adviser, Professor Salim Abdool Karim, described himself as “optimistic” that the target coverage could be reached without making it compulsory.

“Making it compulsory may end up fuelling anti-vaccine sentiment and conspiracy theories,” Abdool Karim said – but he stressed that he also supported “compulsory targeted vaccination” in regard to outbreaks in contained areas.

“If there is an outbreak of the virus in an elderly care facility or in a congregate institution, then the state must be able to go into those places and vaccinate everyone quickly to contain the epidemic – as even small numbers of unvaccinated individuals could have an impact on future spread and mortality,” Abdool Karim said.

In such a situation, he said that the Health Act would enable the government to act in the interest of public health and to vaccinate everyone at risk. DM168