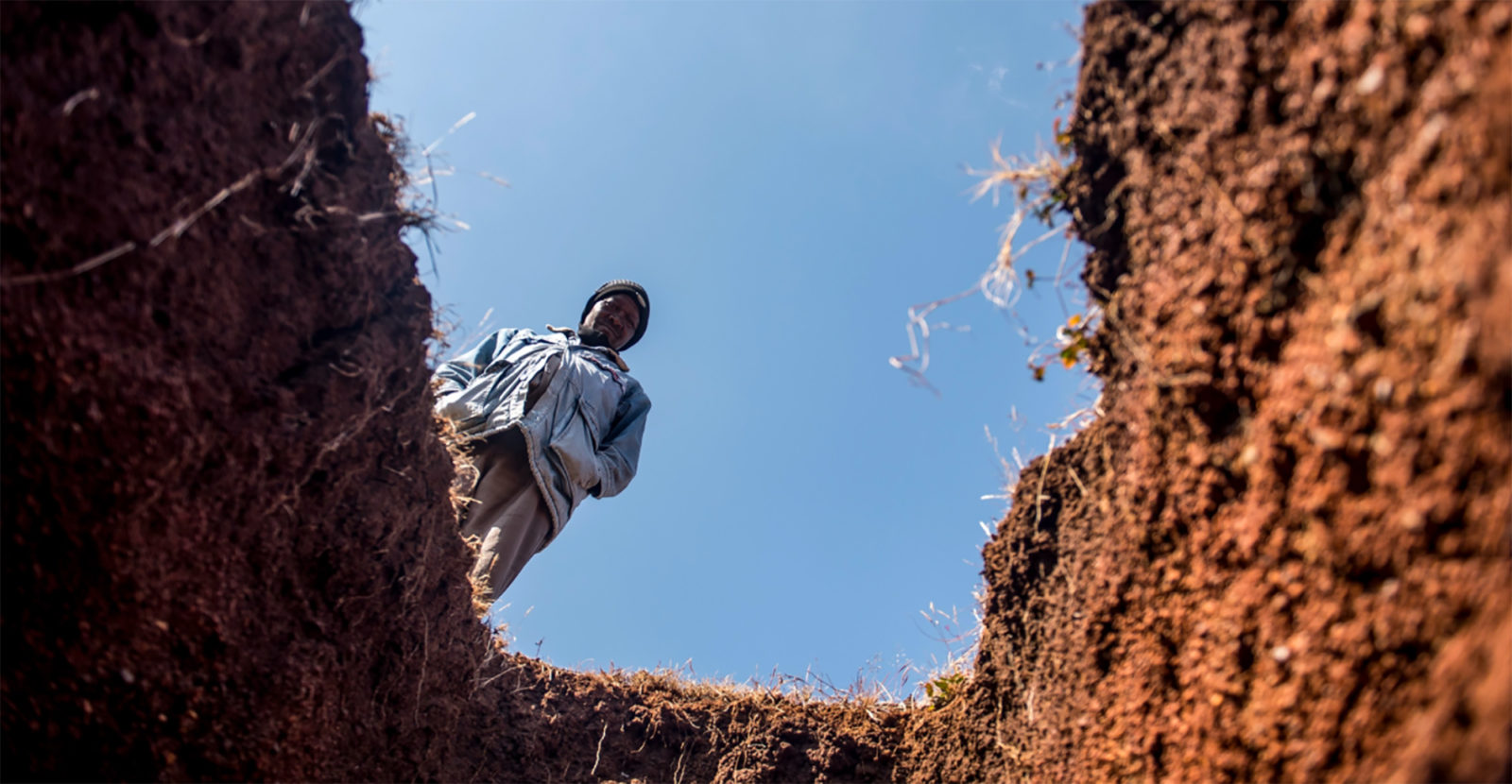 An image taken from inside a freshly dug grave at Honingnestkrans cemetery, north of Pretoria. (Photo: Shiraaz Mohamed)

In the wake of the second surge in Covid-19 infections, the revelation that Gauteng has an inadequate mortuary capacity, coffin shortages and burial space underlines the stress funeral practitioners are working under.

The second surge in coronavirus infections and spike in the number of Covid-19 deaths has put immense pressure on mortuaries across Gauteng.

Kerr’s Funeral Directors owner Keenan Kerr said he was working with the Department of Health and was expanding his business. He said the additions would include a mortuary.

“Mortuaries across the country are under extreme pressure. Remember that on construction mortuaries were allocated a specific capacity, which determined how many bodies they can handle,” said Pheko Methula of the National Funeral Practitioners Association (Nafupa).

“As an example, you find that in a day you do five Covid-19 burials, but there are at least eight bodies waiting for burial.”

A mortuary employee at a funeral parlour in Soweto said: “It’s frightening. It’s like every body that is brought in is a Covid-19 case.”

The 34-year-old man, who has been working for the undertaker for three years, said he fears for his life.

“Sometimes when space runs out in the cold storage we ask other undertakers to keep the bodies for us.

“It’s not late to build more mortuaries, because the virus is not going away. If the situation continues like this it will lead to a disaster. Already, insufficient storage space is a disaster because until they are buried, corpses must be kept in a cold-room.”

A nurse told Daily Maverick that at the Johannesburg hospital where she works, entire casualty wards are filled with Covid-19 patients.

“What’s worse is that we keep receiving more Covid-19 patients daily,” she said.

“Our mortuary department is fast filling up, space is running out.”

Nafupa’s Methula said because of inadequate storage facilities, funeral parlour staff had to work very long hours. He said there was also a shortage of burial staff and mortuary staff across the country. He said undertakers were faced with a shortage of vehicles to transport bodies and machinery.

“People are dying in their numbers, but municipalities fail to provide burial space. This is a huge problem.”

However, the City of Ekurhuleni says it has sufficient burial space. Of the 14 cemeteries listed by the city, two have been closed. The city indicated that alternative land was available for the closed cemeteries. The Mooifontein cemetery has no burial space left.

“The general situation is that the number of burials has reduced compared to the winter months,” City of Ekurhuleni spokesperson Nhlanhla Cebekhulu said.

Methula told Daily Maverick that the industry was battling a shortage of coffins in many parts of the country. He said this was due to the second Covid-19 surge coinciding with the closure of factories for the December holidays.

“Factories have a coffin backlog in the Eastern Cape, Western Cape, Gauteng, parts of the Free State and KwaZulu-Natal,” said Methula.

Johannesburg City Parks’ manager, Reggie Moloi, said: “June, July August was our worst. June, July, August, we did 856 burials due to Covid-19.” He said the spike in the three months coincided with the first surge in coronavirus infections in Johannesburg.

“January is only eight days old but we are already on 45 total burials,” said Moloi.

The City of Ekurhuleni said it has enough capacity in its cemeteries to carry out burials for the foreseeable future. The Ekurhuleni metro logs a total of 160 burials a week, including cremations. The city said the average number of weekly burials in January 2020 was 362.

The city carried out 1,342 Covid-19 burials in seven months.

Methula warned that if the government did not subsidise Nafupa, communities would suffer. “What we are saying is government must subsidise us; if not, we charge families.”

Methula pleaded with the government to look closely at the issue of extra service. This is any service that undertakers did not perform before Covid-19.

“Covid-19 has caused great economic harm to many families and communities around the country and the world. This is no time to be charging families for extra service, because many people have also lost their jobs.”

Methula said many undertakers and burial staff were dying from Covid-19, and pleaded for recognition by the government.

“Imagine if funeral undertakers told government that they will not be taking Covid-19 bodies. How would the country look?” DM

THE TOOTH BE KNOWN

Something to chew over: Scientists get into the skull of 3.6 million-year-old Little Foot