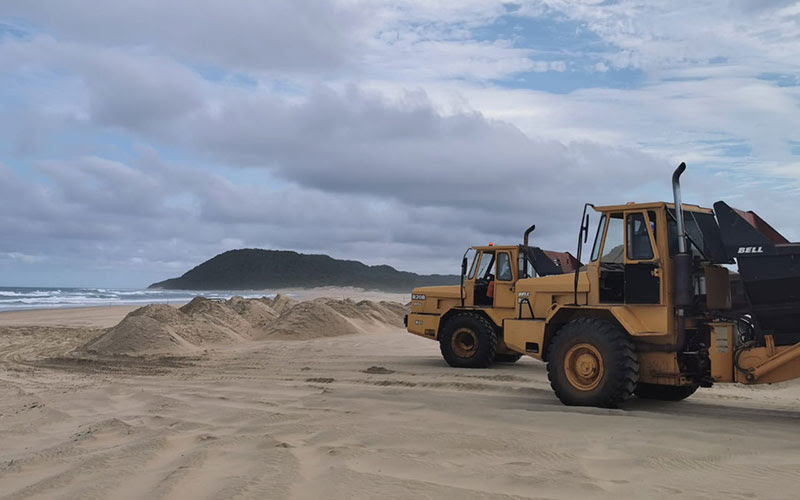 Heavy earthmoving equipment and trucks were moved onto the beach at Lake St Lucia this week to carve an artificial link to the sea (Photo: iSimangaliso Wetland Park Authority)

The mouth of South Africa’s largest estuarine lake has been bulldozed open with heavy earth-moving equipment – in apparent open disregard of a high court ruling and the scientific advice of several of the country’s most experienced estuarine experts.

Ecological experts fear the artificial breaching of the Lake St Lucia estuary mouth on Wednesday afternoon poses a major setback for a multimillion ecological restoration project financed by the World Bank to reverse decades of human interference in the natural functioning of the heartland of the iSimangaliso Wetland Park, a World Heritage Site.

Four years ago, the Isimangaliso Wetland Park Authority and then Environmental Affairs Minister Edna Molewa won a landmark victory in the high court against local sugar farmers who had demanded that the lake be breached to protect some of their fields from back-flooding as a more natural water flow was restored to the lake. The court victory – later affirmed by the Supreme Court of Appeal – opened the way to reconnect the uMfolozi River to Lake St Lucia, which has been increasingly starved of water due to nearly 50 years of human interference.

But the park authority, now under new management, appears to have buckled under pressure from local fishermen, sugar farmers and tour operators in St Lucia village who have been pushing the government and the park authority for a quick-fix solution by bulldozing the mouth. Proponents argue that an artificial breach would allow seawater to re-enter the lake from the Indian Ocean, thereby increasing the number of saltwater species for recreational anglers, reducing muddy sediments that have built up around the estuary, and reducing the risk of sugar farms being flooded in the uMfolozi River floodplain.

The authority has been sending out mixed messages recently – denying that it had sanctioned a breach while indicating that it would be guided by expert advice on what to do.

And when earthmoving equipment arrived on the beach on Monday, attempts were made to allay concerns by ecologists by suggesting that the equipment was simply there to scrape away a bit of beach sand and to “nudge the system” into opening naturally.

The authority confirmed on Tuesday that “equipment was moved on-site to begin the implementation of a short-term solution to help reinstate functionality of the estuary, and re-establish links with the ocean” – but it did not explicitly state that it planned to bulldoze the mouth open.

Simultaneously, local lodge owner and St Lucia village marketing representative Amanda Theron de Gaspary posted a sound clip on social media declaring that: “Okay, they are not opening the mouth 100%… They are just giving it a ‘little nudge’ to use Oom Rudi’s words… So they are not digging a trench all the way to the ocean… They are not going to open it and let the estuary run empty… You can speak to Oom Rudi.”

Yet by lunchtime on Wednesday the earthmovers did just that – ploughed a trench directly into the sea, breaching the mouth – and “Oom Rudi” (resident and ratepayers representative Rudi Redinger) flatly refused to speak when Daily Maverick contacted him to clarify why the mouth had been bulldozed open.

“We are not prepared to make any comment. We are not playing games,” said Redinger, who recently made a presentation to the park authority in which he suggested that the mouth be breached because the solutions proposed by scientists were not “realistic”.

Redinger has also been at the forefront of recent campaigns by St Lucia village residents to be granted greater autonomy, by “seceding” from the neighbouring Mtubatuba Municipality. Some residents of the former fishing resort were reported to have proposed a new flag for the town and also put up a boom-gate barrier at the village entrance to control access a few years ago before it was removed after opposition from neighbouring communities.

The wetland authority did not respond to email queries on Wednesday about suggestions that it had acted surreptitiously or dishonestly by giving the impression that it simply wanted to “reinstate functionality of the estuary” with the assistance of bulldozers, when in fact its intention from the outset was to break open the mouth – contrary to the advice of ecological experts.

Professor Derek Stretch, a senior scientist and expert witness who gave evidence in the high court strongly opposing artificial breaching, said he was not clear about who had recommended the action – though it was clear that local farmers and several St Lucia tourism operators and bed-and-breakfast owners had become impatient and were pushing for the mouth to be breached.

Stretch is an emeritus professor at the University of KwaZulu-Natal (UKZN) who holds a PhD in environmental fluid mechanics from Cambridge University and was formerly director of the UKZN Centre for Research in Environmental, Coastal and Hydrological Engineering.

He was also among a group of several estuarine experts who recommended that 50 years of artificial manipulation of the mouth should be halted.

“I sincerely hope that they don’t persist with this [new] strategy to interfere with natural processes,” said Stretch, adding that he had withdrawn from a recent symposium held by the iSimangaliso authority as he did not wish to be involved in processes where scientific advice was seemingly “trashed”.

“Unfortunately, we are now almost back at square one.”

Senior estuarine scientist Nicky Forbes, who was closely involved in a R72-million project to restore the lake’s natural ecological functioning, said it appeared that the new management team at iSimangaliso were anxious to “get pressure off their backs”.

By bowing to pressure for a short-term solution the authority was disregarding advice from science experts and the breaching meant that scarce freshwater inflows over the past four years would now start draining out of the lake.

“This is totally unacceptable… when winter comes the lake will start drying out again and a whole lot of dominoes will start to drop. I would like to know who really made this decision… There also seem to be no data about current sediment or water levels in the lake.”

Bryan Ashe of the iSimangaliso Action Group has sent questions to the park authority about whether an environmental impact assessment was done before the breaching decision was taken.

He has also asked who paid for the breaching and the name of the company that conducted the operation and whether Barbara Creecy, the new minister of environmental affairs, forestry and fisheries, was consulted.

Creecy’s office, her department and the iSimangaliso authority did not respond to queries from Daily Maverick, although the authority issued a statement on Tuesday in which it said there was a need to reconnect the sea to the lake and to reduce sediment levels in the lake.

There was also a need to restore “estuarine functionality”, resolve back-flooding into agricultural fields and restore economic activity, including tourist attractions.

At a recent iSimangaliso symposium it was noted that while the restoration of the St Lucia Estuary/uMfolozi catchment connectivity “has the potential for positive long-term benefits”, short-term challenges for stakeholders remained and “ongoing interventions and monitoring may be needed to maximise positive outcomes”.

“A key resolution of the symposium was to establish an inclusive multidisciplinary task team to take forward the resolutions suggested by the attendees of the symposium… A unanimous resolution was taken by the task team to recommend to the iSimangaliso Wetland Park Authority that urgent action be taken to prepare the area to attempt to achieve a reconnection between the sea and the St Lucia lake, and uMfolozi and Msunduzi rivers.” DM